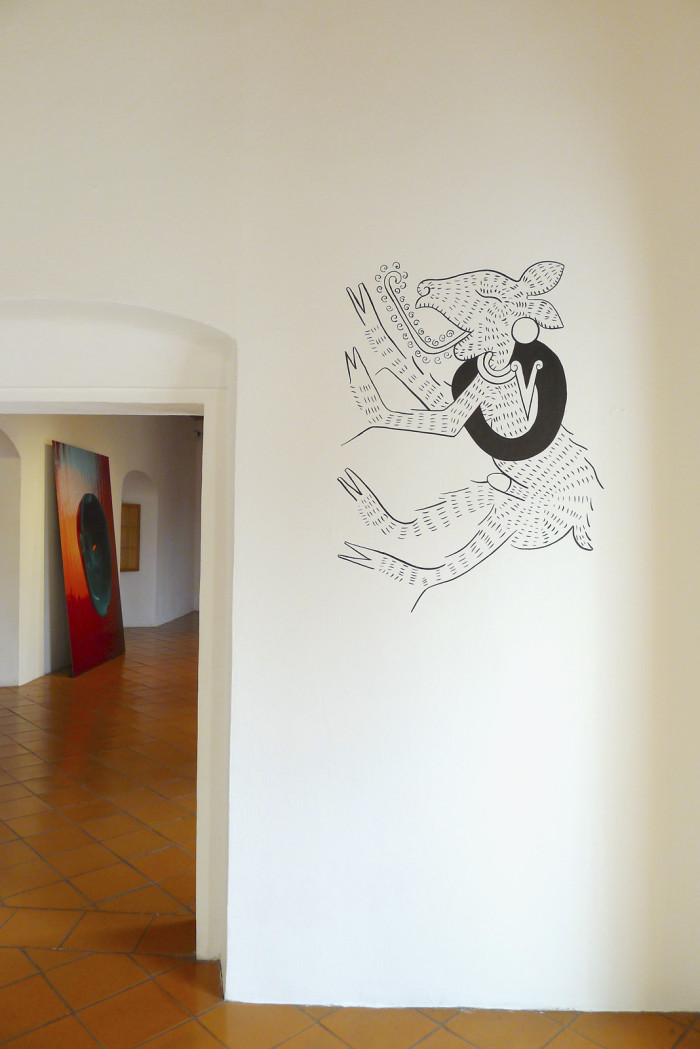 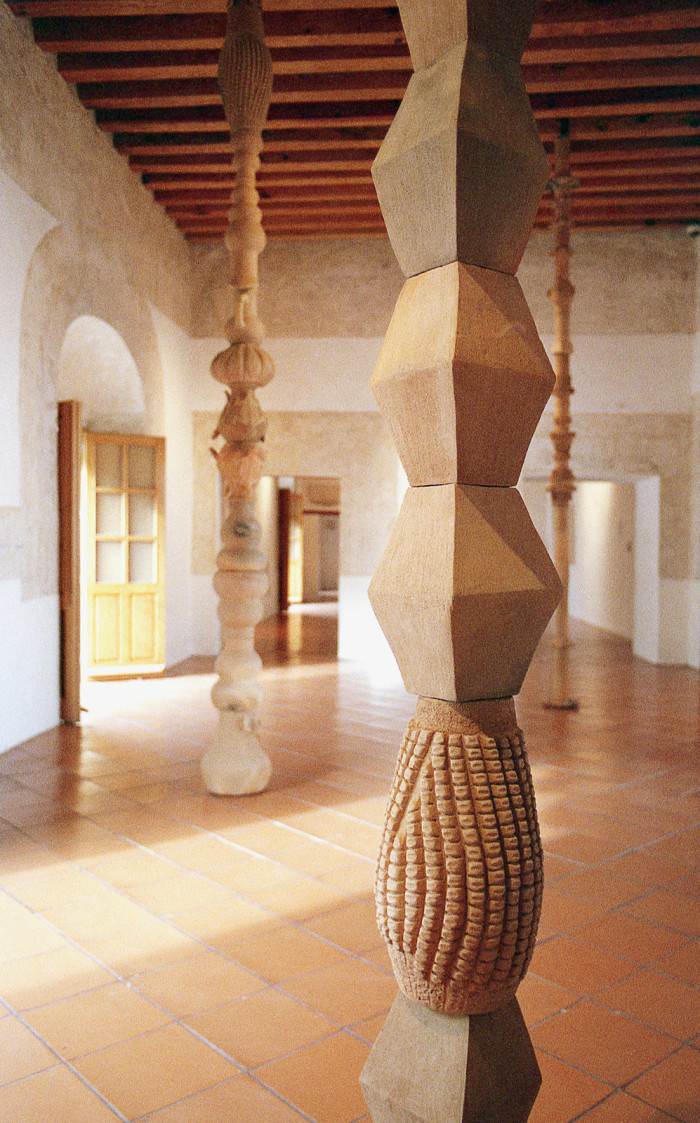 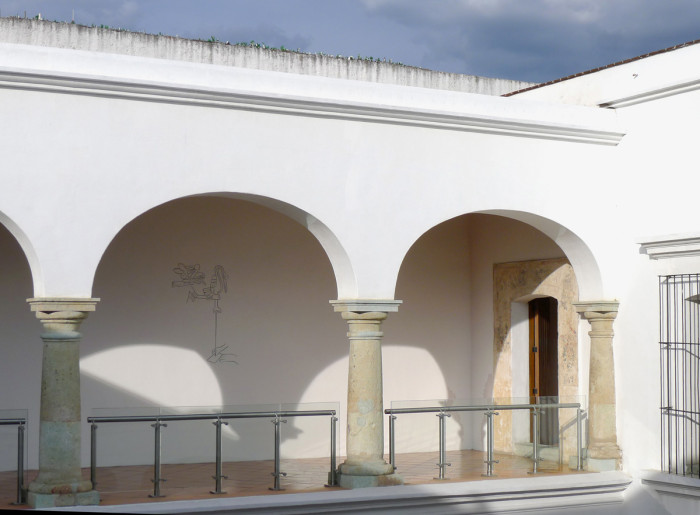 The exhibition begins with a question about the line between time and objects, and how memory is filled with the present.

How to tell the story of the Universe in a hundred years?

How to tell the story of the Universe in one day?

This repertoire of objects, some archaeological, other mechanical, recreational or synthetic, were selected in the present, along with the Coatlicue pottery workshop based in Atzompa, Oaxaca. The selection was the foundation for imagining a series of stories, which now stand as columns in the exhibition space.

Who will measure the space, who will tell me the time? It is situated on the thin line that divides our relationship with objects, with the stories we make about them. Perhaps, the language is not slippery, but the objects. The use, handling is its reason for being and simultaneously its exhaustion, their complete disappearance.

The working process of Castillo Deball blunts with a question that gradually is inhabited by different characters. Some are fictitious, others, historical figures; together they begin to weave an intricate network in which talk in time and coincide in space.

With a language often inconsistent, discursive, formal or poetic sometimes Deball Castillo shows her interest in the specificity of the forms and voices.

In the project Who will measure the space, who will tell me the time?, the initial question of the relationship Atzompa potters have with their archaeological heritage and how it is expressed, is contaminated or dissolved in the present. Far from taking a purist stance, this work began with a series of discussions on the copies, forgeries, style changes and influences in the history of Mexican archeology.

Together with Kythzia Barrera from Innovando la tradición and the family Martínez Alarzón from Atzompa, we visited the archaeological museum Rufino Tamayo and selected our favorite pieces. To this set of pieces, we added a lot of nuts and gears found in Ramiro´s workshop, also a whipping top, a ball, and other belongings, to form a repertoire, a vocabulary to tell our stories.

Maybe you can tell a story from anything, maybe the objects define the kind of story to be told.

The procedure was similar to the surrealist exquisite corpse, Chinese whispers or any other assembly or gossip that adds fragments gradually.

The group split in two. The main exercise was to develop a story to proceed in the span of one hundred years, and one that happened in one day. We ended up with a story of the origin of the Universe in one hundred years, and another about the origin of the Universe in one day. The two stories are almost the same, which got us thinking. Then came the story of the journey of a potter, since he wakes up at dawn to prepare the clay until he finish the pieces, burn them, and then leaves to sell them in order to buy corn to eat.

After hundred years the transit the life and death of the warrior who ended up being life-death warrior. We also realized that the kapok was a main character, and the gears became a metaphor for everything.

And then every character became clay, and we ordered them in columns to reach the ceiling, so visitors can surround the stories of top-down and bottom-up.

This project challenges the idea of a static tradition that should not be changed in order to exist, broadening the debate of what archeology is in the present and how it can be constantly updated to resignify visual identity panoramas

Who will measure the space, who will tell me the time? is a project in collaboration with the Coatlicue ceramics workshop (family Martínez Alarzón) and Innovando la tradición. Produced by the Museo de Arte Contemporáneo de Oaxaca.

The exhibition Who will measure the space, who will tell me the time? is accompanied by the publication Ixiptla Vol. 3. Ixiptla Vol.3 opens a space for reflection in which anthropologists, archaeologists, artists and writers collaborate in the discussion around the model, the copy, the influence and the reproduction.

An archaeologist collects fragments of material culture left by the passage of time. While working, produces other objects: drawings, notes, measurements, photographs and conversations. This material emerges at a specific time, producing a double of the original site, which begins to follow their own paths.

Since the nineteenth century, archaeologists invented several techniques to capture and replicate material evidence: in the form of casts, paper, facsimiles or scale models. Ixiptla follows the path of these outdated objects, which are based on direct contact with the original and take with them a part of the original, and the footprint of a particular moment in history.

The Nahua ixiptla concept has been translated as image, delegate, substitute or representative. Ixiptla could be a statue, a vision or the victim that becomes the god for human sacrifice. The various ixiptla of the same god could occur simultaneously, with unidentical countenances.

Ixiptla derive from the particle xip: skin, cover, shell; is the container, the recognizable presence, the update of a force embedded in an object: a being there, removing the distinction between essence and matter, original and copy.

Therefore, the ixiptla and the image take different paths. Ixiptla is the overwhelming manifestation of a presence.