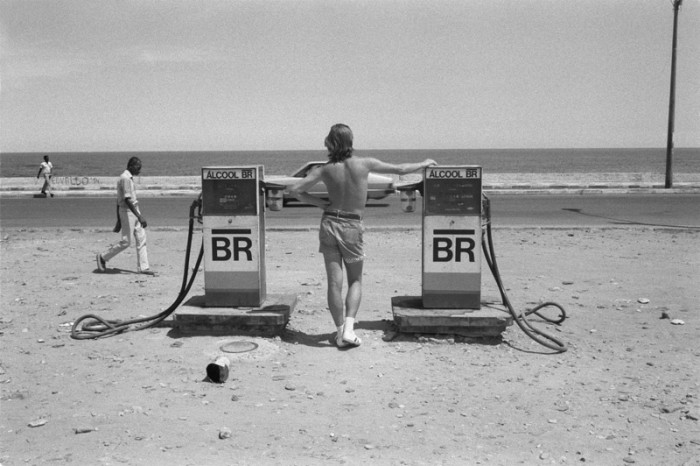 São Paulo-based exhibition space “SOLO SHOWS” recently mounted an exhibition of the early photographic work of Ursula Böckler. The selection of photographs came entirely from her 1985/86 trip to Brazil with German artist Martin Kippenberger and they tell a complicated story.

She doesn’t remember the month exactly. It might have been August or September 1985 when she met Kippenberger at a bar in Cologne. At the time, she had been doing editorial photo jobs for the music magazine Spex, which was publishing the writing of Jutta Koether and Diedrich Diedrichsen. She would bring her camera to concerts, bars and clubs, documenting the nightlife of cold-war West Germany that saw parts of its economy booming, the rise of alternative culture, and a persisting fear of an imminent nuclear fallout. Kippenberger was already a local hero, a notorious artist, a dancing drunkard. Someone who fuelled his own mythology as much as he had fun with the dismantlement of his artist identity, a dynamic that ultimately led to the lasting image of his life and work—the quirky legend. 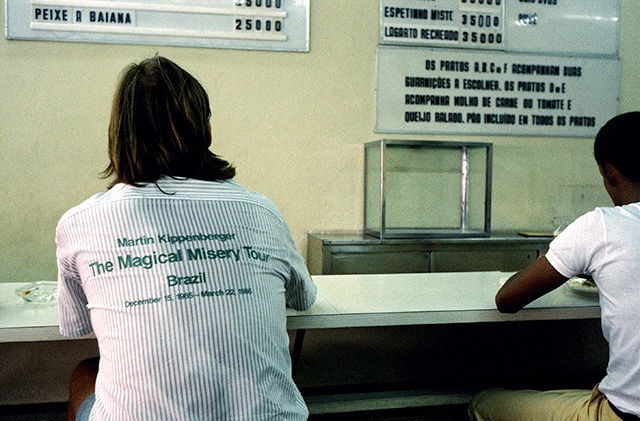 Kippenberger approached Böckler about hiring her as a photo assistant for his upcoming art project. He was about to travel to Brazil, cynically labelling the trip as his own “Magical Misery Tour”. In a typical Kippenbergian gesture, the wording was borrowed from the almost eponymous event by The Beatles, mimicking pop culture, allowing the real world to spill into his work, only to color it in the absurd, feed it back and have it clash with the actual conditions of the world. But what were these conditions? Firstly, the title served as a conceptual umbrella for a German artist travelling to a so-called exotic destination, making his language serve as a shaky justification by supposedly establishing critical distance through the use of grotesque humour and self-exposure. This raises the question whether his knowledge of the complicated representation of his intentions, his destination and the language in between, qualifies the fact that he did travel to Brazil in a position of supposed cultural authority, stumbling around in touristic excitement, making everything his own. 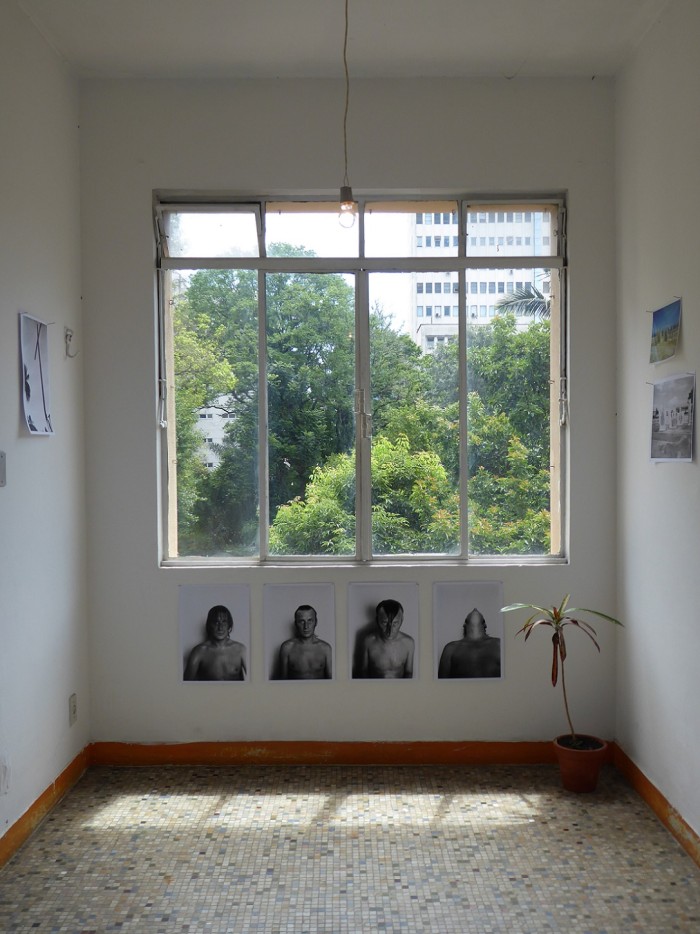 Basically, does knowing that you are using your power—while exposing the fact by making a fool of yourself—ease the grief of those who are being used? Not really. “At the time,” Böckler says, “we called Brazil the Third World”. Is this why he called the trip his “misery” tour? When read today, the attribute “magical” seems almost more problematic, as it romanticizes the supposed misery, but, as we are dealing with Kippenberger’s work here, it’s helpful to consider his multifaceted language and views of the world, his perspective so to speak. The idea of misery relates to the artist himself, again feeding the artist’s mythology but also his refusal to comply with the complexities of representation itself. In a time when many were criticizing the autonomous image or object as a capitalist tool of manipulation, trying to understand it in its socio-political context, Kippenberger infused his work with his trademark anti-aura, playing the smartest fool in the room. His wit, which he parades in many of his works, functions a lot through his language, which was based on colloquial German speech, which, in turn, adds a provincial quality. This further complicates the work in terms of an international reception and subversively questions its authority. 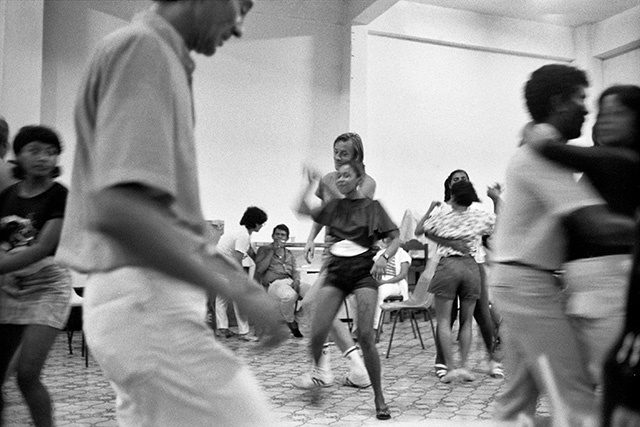 In December 1985, Kippenberger threw a going-away party at the disco  “Alter Wartesaal” (“The old waiting room”), where Ursula Böckler met him a few months before. “Kippi, please come back!” was emblazoned across a large picture of Sugarloaf Mountain. Coming back was always part of the deal. In Brazil, the two embarked on road trips that took them to destinations such as Maceió, Recife, Brasília and Manaus. The idea was that Kippenberger would do impromptu performances, many of them in front of a variety of landmarks (monuments, public sculptures, advertisement, etc.), photographed by Ursula Böckler. This culminated in his acquisition of a gas station and titling it “Tankstelle Martin Bohrmann” (“gas station Martin Bohrmann”), Bohrmann was a former Nazi who was suspected to be hiding in Brazil. “Bohrmann” translates into “the man who drills”. This performance later became a sculpture, which is now part of the Museum Folkwang in Essen. This gesture reads again in multi-layered ways, first of all, it is disturbing that a German artist buys Brazilian real estate and turns it into his art, which mainly has a European audience, simply because he can. But then, by infusing the problematic aspect of his German identity into the work, by referencing the German Nazi legacy, the collective trauma and the issue of how “to drill” this memory, in a way, empowers his authoritative position but only to undermine it, not unlike how he continuously distorted his artist identity, by playing the drunken fool for example. Travelling around Brazil he pushed this subject, even his outfit supported this image of ridicule, wearing white sport socks and parading his beer belly. 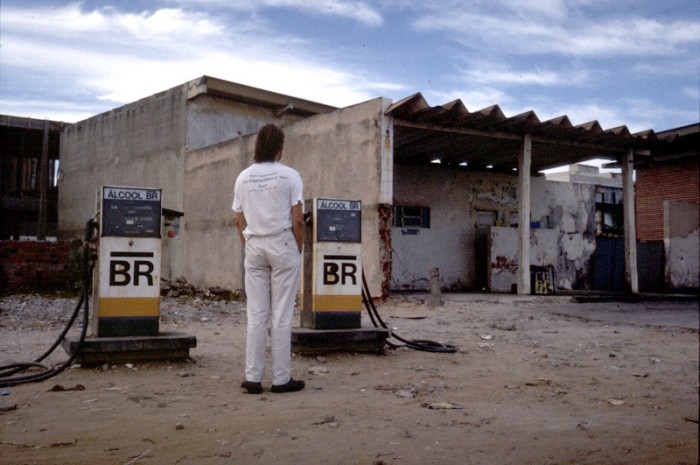 In Ursula Böckler’s account, this created uncomfortable moments, when, at times, it became embarrassing to witness his (very white, very male) performance. The quality of embarrassment, looking at it today, seems to have furthered the intention to affirm the problematic aspects of one’s identity in order to expose its fallacies. This dynamic somehow comes to rest when confronting Ursula Böckler’s work. Even though he wanted his actions to be documented, both of them, especially Böckler herself, insisted that her photographs would stand as their own autonomous works, a position they’re asserting as compelling independent images. Considering this, Ursula Böckler’s photographs communicate different issues; they document Kippenberger’s “Magical Misery Tour”; they show the so-called “Third World” through the attentive lense of a talented young photographer; they expose the silliness of the whole trip, the tensions of intimacy between travellers and their destination, while respectfully facing both the artist as a tourist as well the country as a host. In this way, the problems of this project weren’t resolved but perhaps the inability of reconciling was genuinely portrayed by Ursula Böckler.