A Mountain of Distance: Five notes on the work of Basel Abbas and Ruanne Abou-Rahme

The Arts Institute of Chicago is exhibiting, until January 3, 2022, If only this mountain between us could be ground to dust by Basel Abbas and Ruanne Abou-Rahme, the first exhibition of contemporary Palestinian artists in a large-scale museum in the United States, curated by Maite Borjabad López-Pastor. 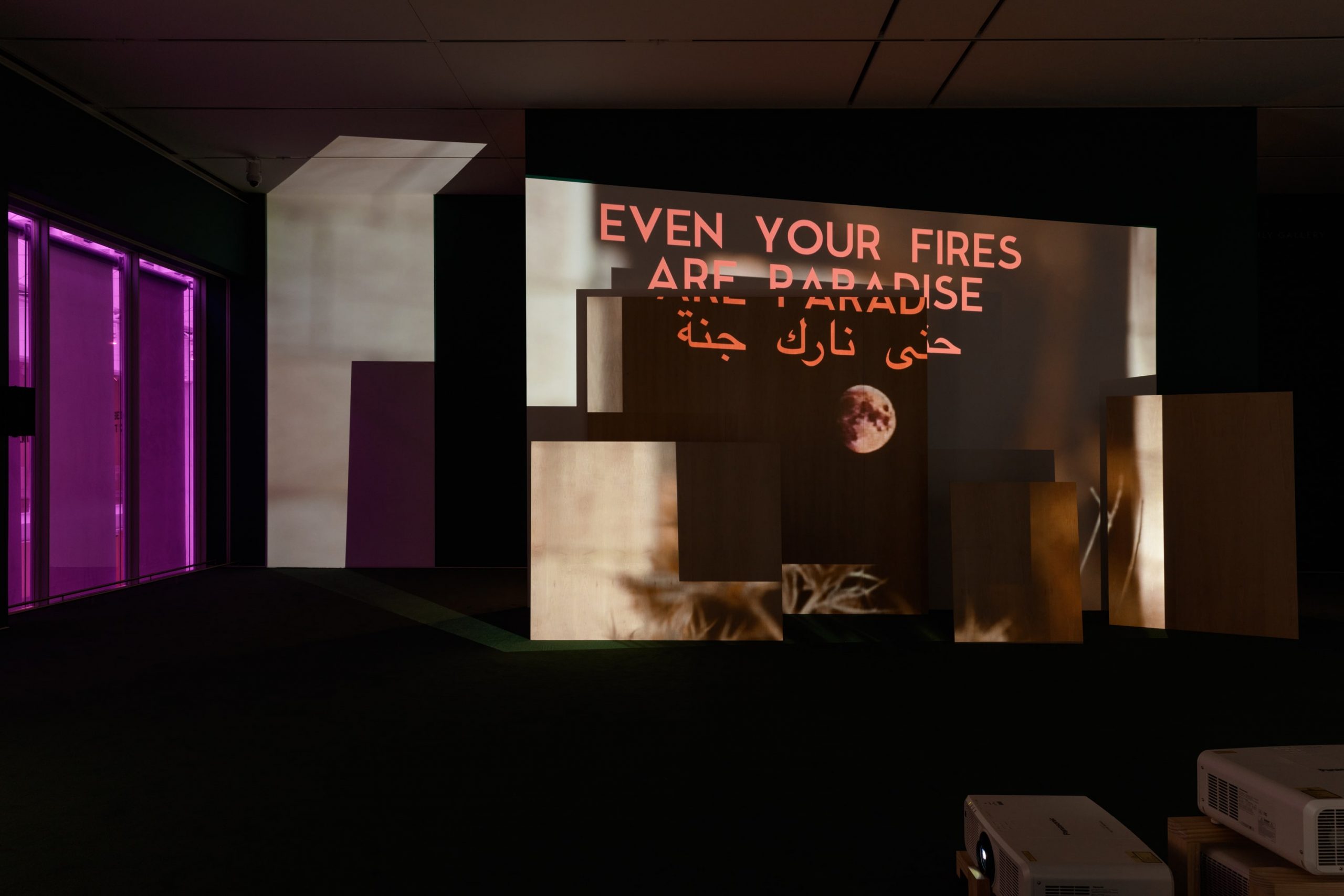 The exhibition is composed of four multimedia pieces: audiovisual and textual installations that review the contemporary condition of the Palestinian people, through key concepts such as the archive, amnesia and precarious bodies. Abbas (1983) and Abou-Rahme (1983) critically intervene the video-surveillance and control systems set up by the Zionist regime, while making sound the axis of a deep political reflection.

There is no modern power that does not rest on the power of the archive: one of the foundational gestures for the organization of a territory and a population is to collect the signs of its generalized material production and give them meaning. But that meaning is not simply positive, its power is always twofold: when the archive necessarily inscribes, at the same time, it eliminates, so that both actions are interwoven in the same dynamic. Jean-Luc Nancy would call it exscription: the gesture by which inscription also eliminates, by which the edges of any written sign also delineate the empty spaces of its surroundings. It seems to me that this is what Basel Abbas and Ruanne Abou-Rahme are referring to when they propose the dialectic tension between the archive and amnesia: Palestinian artists hold a large part of the pieces in If only this mountain between us could be ground to dust in this equation. Inside and outside at the same time: sustained by the inscribing powers of the archive, but expelled, de facto, from the meanings it promotes.

A selection of tweets, Don’t read poetics in these lines, on the revolutions in the Arab world welcomes visitors to the exhibition. Selecting tweets is, in itself, an arbitrary act–where to begin in the archive of forgetfulness par excellence, in the machinery of schizoid writing?–, an echo of the arbitrariness of the code that governs them, here enhanced by the subsequent erasure that the artists make from the chosen tweets. We find ourselves here in an abyss: the material of an arbitrary archive is chosen from an arbitrary point of view, erasing what is already being erased by over-accumulation. The dialectical tension between the archive and amnesia is also expressed, poetically, in the longed-for space between the mountain and the dust of the exhibition’s title. Of course, under the conditions of the one who holds the power of the archive, there’s an insurmountable tension–no will on their part to solve it–, so it can only be expressed by the one who suffers it in the form of longing. At least initially. 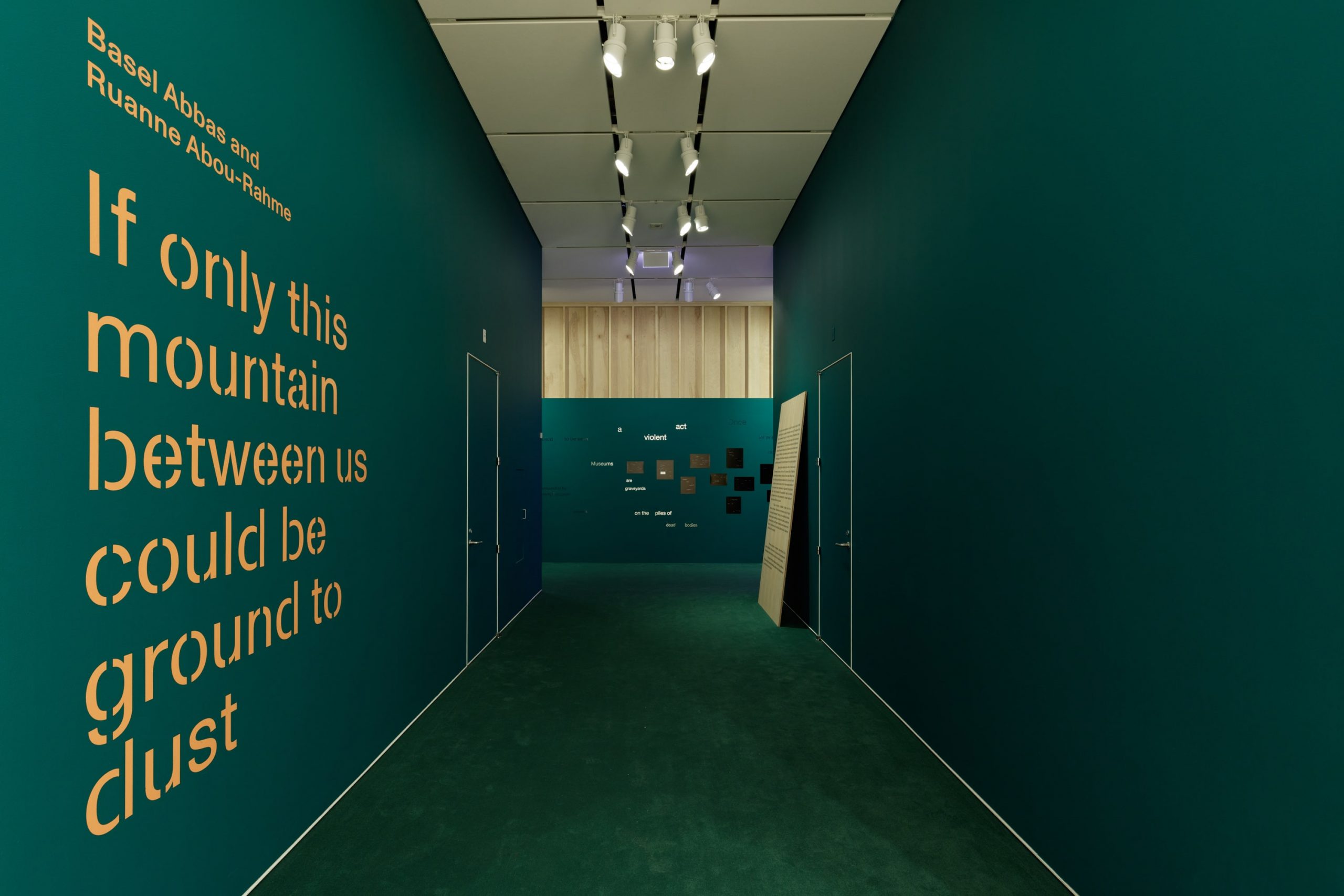 If only this mountain between us could be ground to dust is a phrase from a popular Palestinian song and it seems to me no coincidence that the phonetic word is the turning point by which a yearning can become a political action. The first moment of the erased, barely legible, exscripted sentences of Don’t read poetics in these lines is soon invaded by the enveloping sound of the works in the main hall. The sound makes the very notion of the main hall to be relativized: the music sneaks through the walls, to the extent that one wishes it would do so with greater stridency. But it definitely establishes a different dynamic: sound will not be a mere accent of a visual work, or a piece contained in a corner of the room, but the very substance of Basel Abbas and Ruanne Abou-Rahme’s artistic thought. The tension that the power of the archive releases is filtered by sound matter and its conceptual categories are dislocated: sound, as Ibn al-‘Arabi would say, is capable of any form and, from that metamorphic virtue, the categorical limit that the power of the archive pretends to establish is broken. Let us not forget that the logic of the border is also a logic of the conceptual.

Such an inescapable presence of sound forces us to reconceptualize the very status of images: the images from Yusuf Shawamreh’s surveillance camera, moments before his assassination by Israeli forces, are not perceived in the same way when they are invaded by sound. In fact, no image is: each decibel complements, transforms and overflows the images on display. Their supposedly coherent narrative must be presented in fragments–and, therefore, becomes impossible to glimpse; the exhibition, then, must be traversed. The same happens with the words of Edward Said selected by Abbas and Abou-Rahme for the video At those terrifying frontiers where the existence and disappearance of people fade into each other: all the visual-textual stimuli are embedded in a sound imaginary at the same time beautiful and mournful. Under the influence of sound, the signs inscribed in this imaginary are always ready to vanish into thin air. 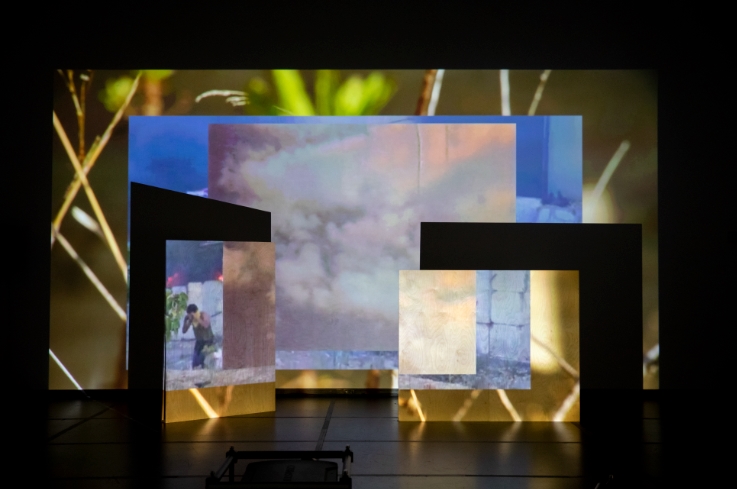 Border limit, categorical limit: a mountain of distance. A certain archival logic requires this first separation, by means of which to subsequently grants a meaning or an entire narrative. Faced with it, the granular dust of music establishes a swirling logic, allowing other longings to slip through its boundaries. This new life, affective-sonorous, while also inscribing its marks in listening, it also concentrates its forces in the evanescent moment of exscription. And I suddenly think, recalling the melancholic beauty of the work of Basel Abbas and Ruanne Abou-Rahme, that every exercise of resistance operates under this dynamic: that of dispersing the referents that seek to establish themselves in a definitive manner. Peoples in resistance are, in this sense, highly musical: they invent dispersions, creative forms of erasure, agile senses, heterodox ways of twisting the limits of categories–even from forced anomie. That’s where, as Said would say, existence and disappearance merge together, music is the first political tool of self-affirmation to the earth and the first reminder of its fragility.