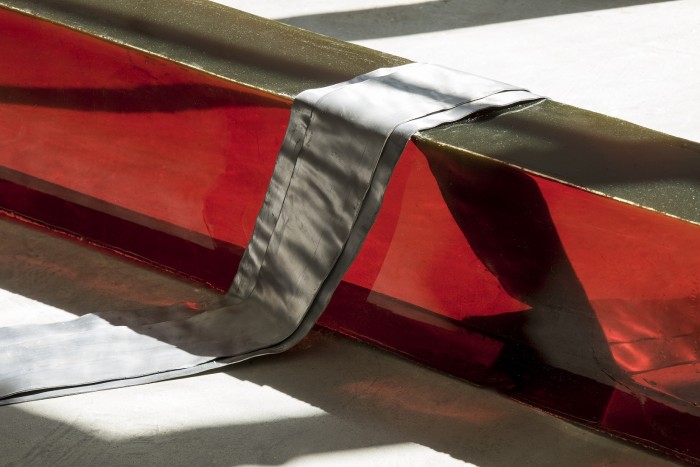 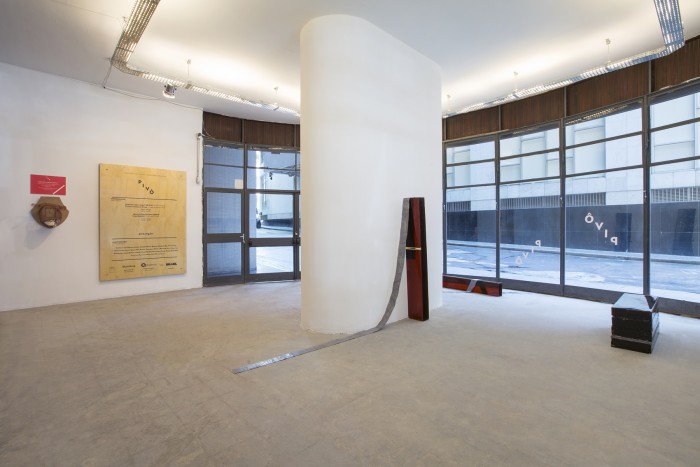 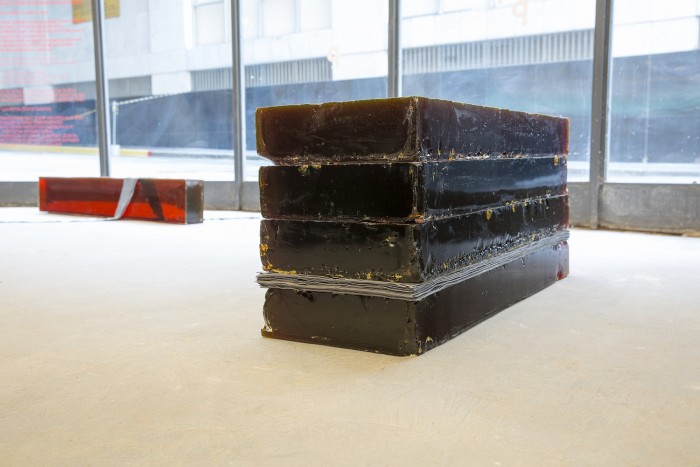 The third edition of Hello.Again presents Paloma Bosquê’s O Incômodo (The Unsettling). The artist occupies Pivô’s ground floor with a series of sculptures made of brass, lead and rosin – the residual vegetable resin obtained after the distillation of turpentine. Bosquê has been working with this resin for a while, studying its handling and testing its limits: rosin is classified as an amorphous solid, that is, a variation of a solid state without a defined geometrical form and with a random atomic arrangement. Taking the material’s physical presence as a departure point, the artist takes on an unfathomable challenge: to propose certain geometry to the rosin’s internal disorder.

Heated rosin can be easily shaped so the artist experiments with different moulds, organising the material in rectangular blocks scattered around the space, supported by brass structures under heavy lead sheets. These materials, with such distinct properties, continuously negotiate with each other and with the venue’s architecture. Rosin is attractive because of its colour, texture and smell; however, its practical use is always in-between and associated with other materials. Paloma Bosquê shines a light into this ordinary material, presenting a work that is constantly moving and depends on the viewer’s commitment to be experienced in it’s fullest potential.

In this project, the artist proposes a situation of tension and balance between different materials. Over time, the rosin blocks settles onto their supports, reacting to their weight, taking on their contours and delicately shaping themselves onto each situation proposed by the artist. The friction between the organisation of brass and lead, gravity and the rosin’s instability places these sculptures exactly where stillness meets movement: in a silent restlessness that can only be observed through time.

The artist’s practice develops around the investigation of materiality, structure and physicality in different medias. In this project, Bosque observes and records the long-term unfolding of this unstable matter and invites the audience to follow the development of her proposal, neither the artist nor the visitors have any idea how the rosin will behave throughout the exhibition period.

Paloma Bosquê was born in Garça, Brazil, in 1982. She lives and works in São Paulo.
The artist’s practice develops around the investigation of materiality, structure and physicality in different medias. Her work results from the direct process of interacting with matter and researching its physical and symbolic relationships with space and the viewer.

This program has the aim to introduce the space and greet Pivô’s visitors. The title is inspired on a work, also entitled ‘Hello. Again’, by the Israeli artist Haim Steinbach, announcing a reencounter. This project has the objective to greet returning visitors and introduce the public to the space, establishing a personal relation with everyone that enters Pivô. The interventions on the ground floor promote a continuous dialogue between Copan’s street, the environment of La Central restaurant and Pivô’s exhibitions and program, instigating passers by through this vitrine, lit by night.

Everyone's Heart Is Full of Fire