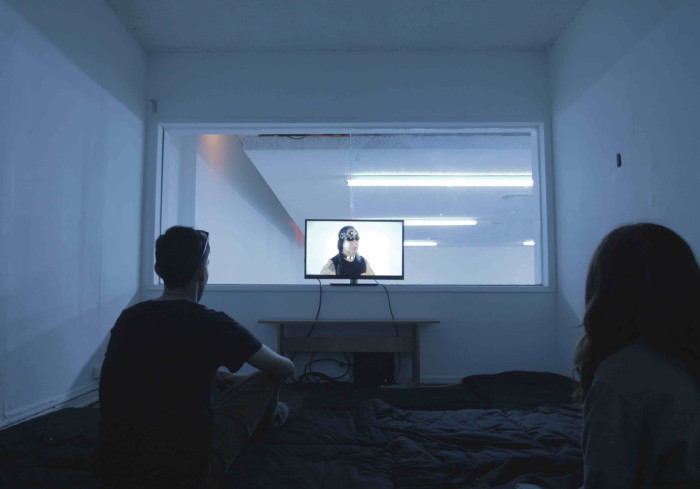 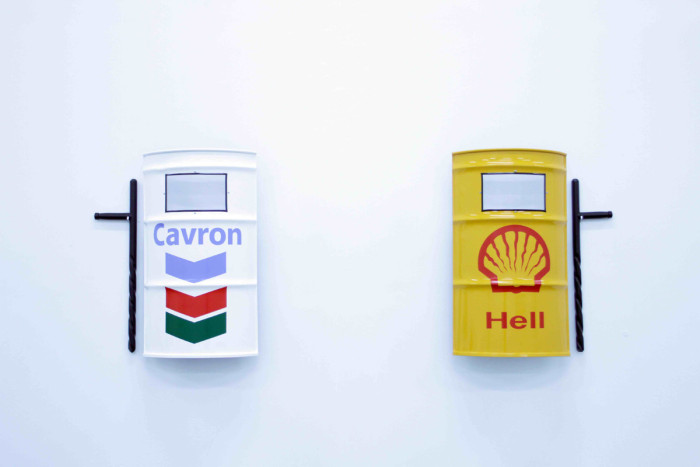 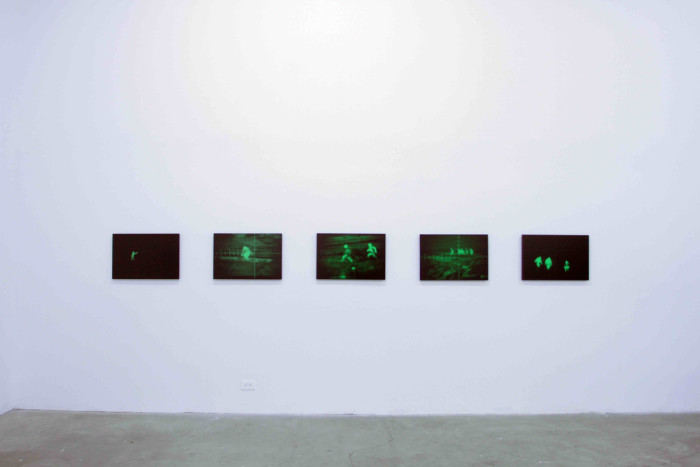 As more and more artists from California started to come to Tijuana, we started noticing the effects and casual relationship developed through this crossing of borders due to the growing number of artists recently engaging Mexico, specifically Tijuana. This relationship has been growing and dissipating and growing again since the late 1980’s and artists likes Guillermo Gómez-Peña, Enrique Rubén Ortiz-Torres, Carmela Castrejón, Jaime Zamudio, Benjamín Serrano, Marco Ramirez ERRE, Hugo Sánchez, Silvia Gruner, Sergio de la Torre, Domingo Nuño, Julio Morales, and Gerardo Navarro1 to name a few, have responded to various notions of border and border art through divergents in aesthetics and politics. Today this relationship is still being negotiated and the resurgence of what is termed border art has only become more complex as the border is further militarized and aestheticized, and as de-colonial projects sometimes under the headline of Socially Engaged Art (SEA) gain momentum in regards to artists seeking engagement with radical practices that are so-called ethnographic and research based, or that places locality as points of departures or arrivals. Often these projects’ gestures of indeterminacy have a way of disrupting specific canons and normalities, usually dominant ones. The relationships between the work made, how it’s exhibited and curated, and the relationships linking artists on both sides of the border are not mutually exclusive and must be unpacked through thieving- idea thieving- as Guattari puts it, “borrowing second hand concepts”, including ethnography, sociology, “mirrored cosmology”, and political theory. For us as westerners, having privileged access to Tijuana and not vice-versa, making work about Tijuana as subject cannot be rendered transparent. Like most SEA projects, these need time to develop. This relationship between LA and TJ (one of many border relationships) shows us alternative histories, as well as methods of exhibition: making and curating. While in Tijuana, we started thinking of its relationship to Los Angeles, and how exhibitions made in Tijuana provide a counter-point, like blowing something up forever leaving a stain on the cement at bottom right corner of the gallery space at Otras Obras, or using the space to hold unmoderated political AA meetings.

We started thinking of how to use the gallery as a place of “contestation”, how to disrupt aesthetic norms; “the imaginative flight of a whole era.” We thought of how institutions opt to keep “all options permanently open”, models of “total reversibility” at the dictates of the art world; mimetic trends, be- cause the shareholders, in this case the trustees, impose their wills unilaterally, a will which “no longer feels restrained by anything.” So in Tijuana, we tried to consider the context as much as possible, half-temporary TAZ maybe. This is why the idea of border art resurged and why some artists from Tijuana were confused as to why outsiders were so interested in this context, in the relationship, a relationship that is now becoming more exciting as more artwork is being produced about the region and as more artists from Los Angeles and others places in California are going to Mexico to better understand their/our own context, and placing it in a discourse of alternatives to metropolises. The sign for Sábado, a benefit event for Otras Obras was written in the same way that ads are written on the border or in many places in Tijuana, in black spray paint over a white cloth, signs that just say disponible and have a cell phone number. It’s not about changing a paradigm there. The signage, instead of creating something conceptually new and critical, adding more “objects” to the world, just simply re-purposed an already existing but uncelebrated way of advertising. It reminds us of mapping; of walking around a city and paying attention to specific events that translate how aesthetics are managed on the border, a détournement of sorts. Just like the Sábado sign, the sign for James Benning and Edgardo Aragón’s show at Otras Obras was written by finger with white acrylic on a black garbage bag. Very few people liked the sign except for James Benning, he took it home with him.

How can border art disrupt the dominant conatus and at the same time provide the capacity for alterity? These practices might shed light on how to overstand the uses of borders politically, how to cross and cross them out, and how the image-sign of the border, like the events in Ferguson scattered our concept of nation, something that museums and an aesthetic education still teach us in late democracy. Coming in contact with the border also deepens our understanding of our own context due to our inherited western education. And last, by re-imaginging border art as something that has the capacity to expand a political discourse for and by artists on both sides of the yellow line, gestures and actions on the urgency of the dependent and violent relationship that has been created on the border. There are many instances of border and one is the Mexico/Arizona border where an Israeli company announced that its subsid- iary company won a bid to install surveillance systems along the border of Arizona, Elbit Systems ltd, famous for providing “intrusion detection systems.” The company describes itself as the “backbone of the IDF.”

In terms of desiring something else it might be helpful to use Lordon’s idea on the neo-liberal “epithumogenesis” project project detailed in Willing Slaves of Capital: Spinoza and Marx on Desire. An epithume is described as a way of saying that objective structures extend into subjective structures. This notion of inter-existence discerns the various ways in which capital does not capture “the variety of desires that exist within contemporary societies, but it captures the larger part that is common to them,” expanding into areas of desire which one does not need nor want, eventually leading to normalized versions of difference in concepts, and finally coinciding with an amalgam of a projected boss figure, in reality dominated from the top down by shareholders, some stocks, and a virtual currency to regulate your unfreedom. Lordon explains that through associations, capital makes us desire our own encapsulation inside cemented social relations, forever hoping to climb a greased ladder. This epithume does not stop at merely situating employees into the “master-desire” narrative but that it also does not stop at simply making you work towards the accumulation of money for survival, nor does it stop at nurturing your “compulsion to buy.” This capitalist project wishes to create an annex for an “epithumogenesis” school, then it figures out a way to create subsidiaries that have the infrastructure to normalize these desires into compartments, history textbooks, phrases, proverbs, memes; professionally manned by Twitter bots, it tries to shoulder an “intrinsic joyful affect” instead of something exterior like the active joy of consuming. Its path towards you and then you to it is the medium of intransitivity. Lordon concludes that this change of the self into happy worker happens because “it is the activity itself that must be reconstructed, both objectively and in the imagination, as a source of immediate joy.” There have been plenty of times where a lot of us, waging away, have re-constructed the concept of capital as one that causes immediate sadness and not joy, one that causes one to off themself because slavery becomes literal and imaginary, refracted in the mind, and in the eyes; light that only looks like dark and vice versa. Lordon however, glosses over a resistant consciousness that existed before capital, what Euro- pean thought calls pre-political and traditional. Lordon states that the “neo- liberal epithumogenesis thus assumes the specific task of producing on a large scale of desires that did not previously exist, or that existed only in a minority of capitalist enclaves: desires for happy labour, or, to borrow directly from its own vocabulary, desires for ‘fulfilment’ and ‘self-realisation’ in and through work.” Guha undertakes the task of providing a sketch on how bourgeois and capitalist consciousness was created in response to subaltern consciousness, a positive position, and not the other way around, a negative position- that these “traditional” peoples created their consciousness’ as a response to bourgeois aesthetics. If this is the case, capital’s two fold nature, that it can perpetuate its own logic, and for Lordon, that it creates new logics that did not previously exist, and capital’s ability to self destruct let’s say- creates paradigms based on already existing and expanding resistant forms, especially today, on the eve of the unabating struggles for class, racial, and gendered equality. Capital then creates these “large-scale” automated desires not out of things that did not previously exist , but in direct response to the insurrections and uprisings posited by marginalized groups who organized based on a political organization beyond the “territories of European political thought.” The Lakotas, located now on a reservation in Pine Ridge, South Dakota, used to wear Ghost shorts which they perceived to keep the Bluecoat’s bullets away. Not only did the U.S. try to erase them as people due to their non-consent, they also tried to erase a dress code, a way of walking.

Maybe the border is a type of intransitive space that allows us a working process that can renominate what art can be outside the over-bearing institution; sleeping at the factory, ways in which to re-capture political imaginaries; taking a step back to look at the sign. Fiona Connor organized Mural Problem at Otras Obras which are ten posters posted around Tijuana. For this work, the title points to this self-reflexive notion of curating and organizing on the border, something we think is important when placing objects, in this case, an object that is popular in Tijuana, the poster; that we can use an already existing paradigm to further an art process that can capture, or at least bring to light processes already in place.18 Or we can look at Carlos Matsuo’s video Violentao (2013) as another intransition. The video is shot right by the border in Tijuana, a landscape similar to the Los Angeles river but houses migrants, deportees, and transients who live inside that concrete tunnel. In Matsuo’s video Mauricio Gutiérrez stands in front of the border river and speaks in a language which at over time starts to sound like a made up language. The subtitles for the piece is taken from a María y José song which “suggests a political vindication by in- corporating a translation to the incomprehensible verbalization of Mauricio.” The texts refers to an ironic attitude toward violence in Tijuana highlighted by a phrase towards the end of the 1:00 video. It says “long live oppression.”