The blind leading the blind 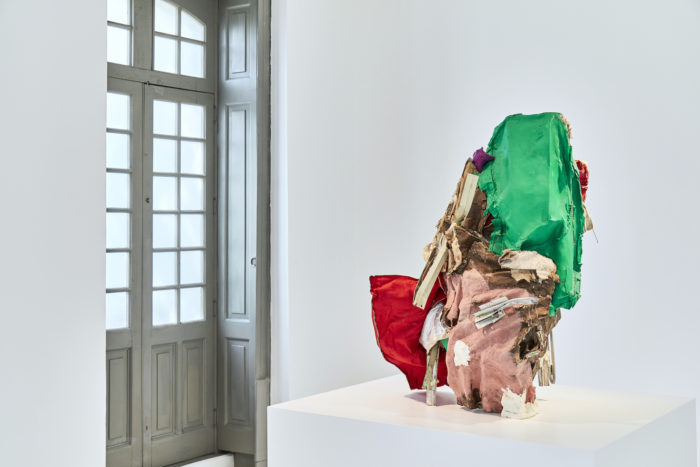 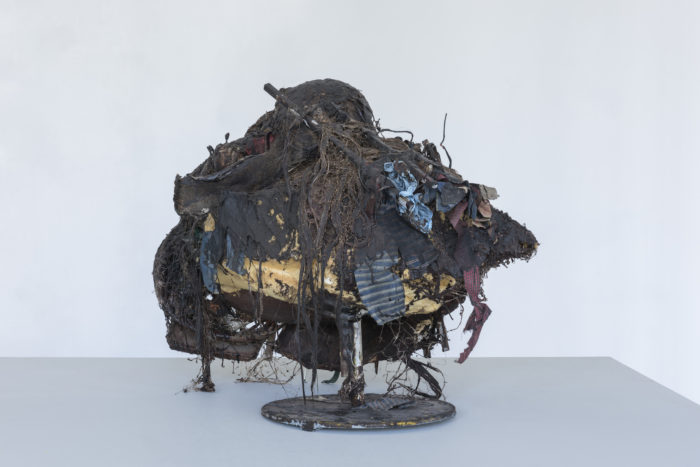 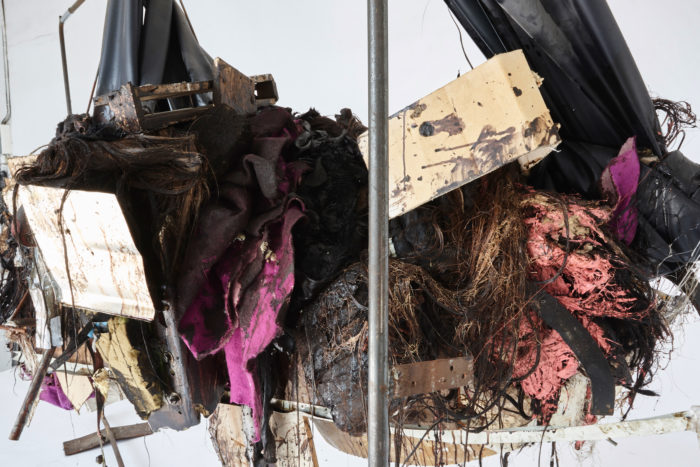 VISITING THE IMPOSSIBLE: ON THE SCULPTURE OF PETER BUGGENHOUT

The Blind Leading the Blind is Peter Buggenhout’s first solo exhibition with Galeria Hilario Galguera. Comprising works from four different series—Mont Ventoux, The Blind Leading the Blind, Gorgo, and Mute Witness—the presentation outlines various fundamental aspects of his sculptural practice while at the same time addressing recent developments. Buggenhout’s sculptures are an ongoing event of existential indeterminacy. At once an outcome of negation and assertion, implosion and expansion, they disobey the distinction between inside and outside, front and rear, central and marginal, upward and downward, resisting the notion of a fixed vantage point and undermining the concept of a coherent, unified identity; of self-hood.

To a large extent, Buggenhout’s sculptures stem from the conditions of the ruin. Formally unraveled, open-ended, and fragmentary, they appear as if they fell from the sky or were pulled from the bottom of the ocean, opposing the illusion of persistence and completeness as well as progression and overcoming. As simulated remnants of ruins, Buggenhout’s sculptures problematize the idea of positive production, and in a wider sense of recorded experience, of recorded memory and acquired knowledge. They involve an uncontrollable accumulation of materials, objects, processes, and situations, responding to the world as an unpredicted, incomprehensible reality, devoid of direction or structure. Buggenhout’s sculptures are a cyclical activity. On the one hand, they are like an avalanche—a sudden intrusion of a disastrous state of things into everyday life. On the other hand, they are also like a wave, an eruptive outgrowth generated from the destruction, without denying it.

Begun in 2006, Buggenhout’s Mont Ventoux series is marked by the use of animal intestines, primarily stomachs, and entrails, as sculptural material. The two Mont Ventoux sculptures displayed here are condensations of a cow stomach with both organic and synthetic elements. Yet instead of serving as the tissue that makes up internal organs, here the intestines function as the outer shell, the skin of the sculptural object.

Throughout the series, the Mont Ventoux sculptures relate to and embed their own process of production within the context of man’s cultivation of nature. However, Buggenhout’s use of intestines does more than defining the birth of art as a shift from nature to culture; it turns real lives and deaths into sculptural materials.

The title Mont Ventoux alludes to a text from 1350 by the Italian poet Petrarch that unfolds the story of his ascent of Mont Ventoux in the form of a love letter. In a conversation with the author, Buggenhout explains his allusion: “Petrarch thought he could survey and master the world standing on top of Mont Ventoux. This mastery is a lie, because looking at things from a distance is an illusion; it is impossible to get the overall picture when you’re in the middle of something.” With this explanation, the Mont Ventoux series is perceivable not merely as a one-way movement from nature to culture, but also as a movement in the other direction, thereby dismissing the pretension of humankind to dominate and acknowledge the world, and deconstructing the narrative of history as a linear progression.

The Blind Leading the Blind, after which the current exhibition is titled, is Buggenhout’s most prominent group of works and is often referred to as the ‘dust sculptures.’ Begun in 2004, these works are contourless stacks of wreckage concealed under a layer of dust, rendering the physical and formal properties of their components illegible, obscure, forgotten. Varying in scale (from medium-sized to monumental) and modes of display (stretched from the ceiling, mounted on the wall, placed on the floor, positioned on a pedestal, or encased), the dust sculptures cannot be harnessed or appropriated. They do not attest to anything except the uncontrollable loss of self-identity, in the course of which things not only cease to exist but can no longer be remembered for what they were. Buggenhout’s dust sculptures are climactic topographies of indistinguishability, brokenness, entropy, and decay. They express the subordination of everything—culture, history, and human existence—to nature; namely, to death, to dust. While demonstrating the inability to fixate things by burying them under dust, the works in The Blind Leading the Blind confront us with the improbable fixation of their own layers of dust, epitomizing a consistent inconsistency.

The Blind Leading the Blind is the title of a painting by Pieter Bruegel the Elder from 1568. Symbolising the consequences of a life that lacks faith, the painting depicts a trembling procession of blind men being led by the one at the head of the line into a ditch. In Buggenhout’s universe, however, the title serves a different purpose, stressing the fact that the dust sculptures do not depict anything and do not suggest any verbal or visual equivalent by which they can be described or emerge as a distinct image. Excluding representation and signification, the dust sculptures elude outside language, outside recognisability, and therefore outside reason.

The Gorgo series pushes Buggenhout’s sculptural exploration even further. Caught in concurrent states of overflow and concealment, the Gorgo sculptures are a result of soaking partly identifiable materials (from cardboard to horse hair) in pigs’ blood. As such they address sculpture in terms of a sacrificial ritual, of an experiment in different registers of matter and reality. But, as exemplified in Gorgo #22 (2010), one of the four Gorgo sculptures included in the exhibition, the series also situates Buggenhout’s practice within the realm of performance, of theatre. Gorgo #22 is loosely delineated by a freestanding, bent iron frame. Inside the frame, ramified debris is suspended in the air by two folded curtains. Soaked in pig’s blood, the debris is a conglomeration of rubber, plastic, cardboard, polyester, aluminum, and hanks of horsehair popping out of and winding around it. The whole setting is associable with street theatre or puppetry, in which the transgressive sculptural constellation along with the curtains that carry it are roughly personified as an acrobatic creature hanging upside down from the top bar of the frame.

The title Gorgo connects the series to Greek mythology and the Gorgons, the three snake-haired sisters whose appearance transforms those who behold them into stone. The title characterises the Gorgo sculptures as a dynamic interface between the bestial and the inanimate. It specifically resonates the myth of Perseus and Medusa. In order to attack her while avoiding a direct eye contact, Perseus approached Medusa when viewing her reflection on top of his polished, mirror-like shield. As Buggenhout seeks to do, Perseus operated in an intermediate zone between reality and its reflection. For him, a reflection is not a static picture of reality but an operative factor in it.

Buggenhout’s rejection of verbal significance does not prevent him from giving titles to all of his works, not a single one of which is ‘untitled.’ The titles are independent, emphasising the sculptures’ externality to language, to figuration. Buggenhout’s works occur within a universe of base materiality (intestines, dust, waste, blood), of formless matter that can never be idealised. It is a universe of tragic consciousness facing the ephemerality of all things. It is a universe of disconcerting opacity introducing the rupture between perception and cognition, the visible and the actual.

The exhibition The Blind Leading the Blind also features Buggenhout’s most recent series, Mute Witness (2017). It is a series of three-dimensional wall-works, each of which consists of a relatively large cloth bag that was stiffened and then mounted vertically on the wall. Each cloth bag is frozen in a different position and slightly varies in terms of shape, size, surface, texture, and color.

The ‘muteness’ of the works derives from the separation between their outer surface and their inner space. The outer surface draws our attention to the inner space of the cloth bag but cannot testify whether it is full or empty. It remains a paralysed, mute witness to that which lies behind it. The unresolved discontinuity between the outer and the inner stages a sort of locked-in situation parallel to a pathological syndrome in which human subjects have lost access to their bodies and can only move their eyes. This locked-in situation simultaneously animates and neutralises the object.

The immediate image the works in Mute Witness invoke is an abstracted human torso, a limbless body. The image of the limbless body recalls Gilles Deleuze’s and Felix Guattari’s concept of the ‘body without organs.’ Deleuze and Guattari describe our body as arrays of productive desiring-machines. During the desiring-production of our body, “a moment comes when the desiring-machines congeal and form an enormous undifferentiated object. Everything stops dead for a moment, everything freezes in place. That object is the body without organs, the desiring-machines at a zero-degree of intensity, a moment of anti-production constantly fed back into the process of production.” [1] Hence, the body without organs is an entity of motionlessness conceived by and during a flux. Like the Mute Witness series, and Buggenhout’s work in general, it is an undifferentiated object which holds the secret of prolific multiplicity without telling it; which is affined to increasing complexity without exposing it.