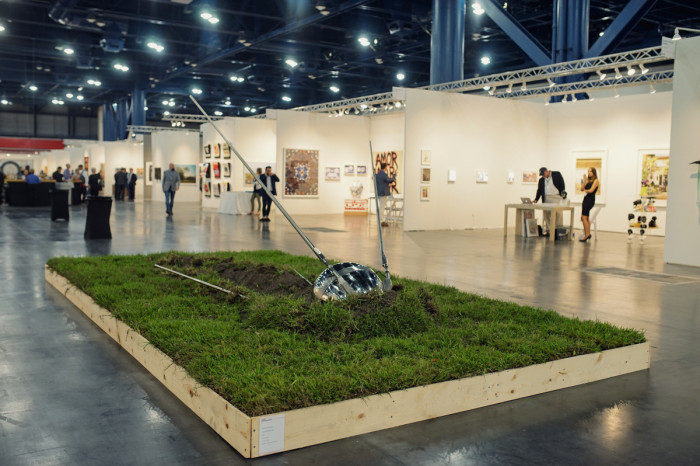 There’s a 1931 Gershwin love song whose first verse goes like this:

Perhaps you already know where I’m going with this. The song is both knowing and droll, letting a listener in on the fact that it’s okay to be charmed by an over-simplistic rhyming scheme, and to even revel in a genre which relies on such oversimplification, just as long as one keeps in sight the broader game. With the Gershwins, we might call the broader game “popular song,” with the Texas Contemporary, it’s “art fair.”

Begun in 2011, the Texas Contemporary is an annual event produced by Art Market Productions, a Brooklyn-based company that also generates fairs in Miami, New York, and Seattle. Art Market Productions claims, via its website, to be “dedicated to improving the art world by creating platforms and expanding networks of connection.” That may be so, but platforms for whom? Connections to whom? Questions left unanswered.

It is neither original nor revelatory to critique an art fair for supporting and iterating the worst of Late Capitalism—and believe, there’s plenty to fuel such a critique: non-profit art spaces given impoverished exhibition space and slummed together at the back of the exhibit hall; colorful and inviting spaces to rest are marked off for VIP access only; and an under-conceptualized grouping of public projects that vacillate wildly between shiny crowd pleasers and politically-minded art (the latter defanged by its context).

Yet there was at least one aspect of the Texas Contemporary that was both surprising and generative, a special curated section of seven galleries and two non-profit spaces from Mexico City, entitled The Other Mexico. This should ring a bell for anyone familiar with the history of Mexican literature, as it is a call to Octavio Paz’ 1973 text of the same name. The curator of The Other Mexico, Leslie Moody Castro, is right to invoke such a luminous set of essays in the context of an art fair. For example, Paz writes about insidious notions of progress in his “Critique of the Pyramid,” stating that, “It has given us more things but not more being.” Paz’s words seem tailor-made for art fairs, spare and incriminating language for theaters of excess.

But what The Other Mexico has going for it is precisely what separates it from the fair at-large, namely that it gives a sense of breadth and depth in regards to Mexico’s thriving contemporary gallery scene. The Mexican Consulate paid for the galleries’ booth spaces, and there was a small clutch of programming (parties and walkthroughs, mostly) geared towards boosting the signal of the eight participating spaces from Mexico City. Two of the eight galleries representing Mexico City, MARSO and Yautepec Galería, began as non-profits and have since transitioned into commercial galleries—making the case for a particularized hybrid coming out of D.F. Castro also programmed Casa Maauad into the mix, whose funding model includes selling a handsome suite of artists’multiples. The galleries included in The Other Mexico showed a tendency towards photo conceptualism and abstract painting: the small, earthen bilds by Tomás Díaz Cedeño (Yautepec Galería) betraying the industrial materials that frame them, and the large-scale photograph of a plane breaking the sound barrier by Andrea Galvani (MARSO) that pushes the limits of photography. These are just two examples of a rich showcase of artists from The Other Mexico galleries. 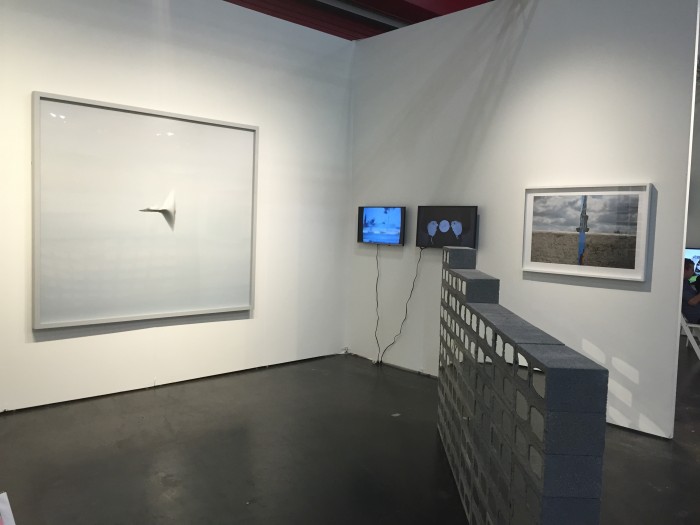 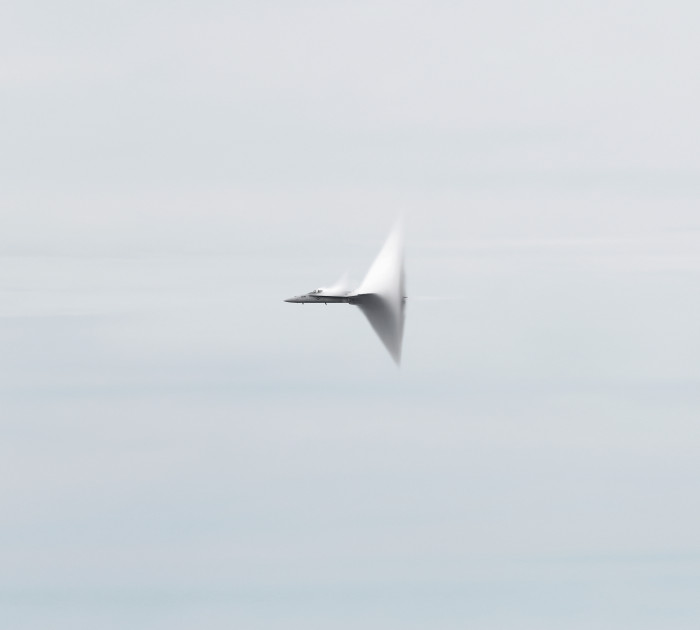 As for the rest of the fair, if there is a poetics to be found it’s distinctly Houstonian in its flavor. While the art fair continued over four days in a third floor exhibit hall of the George R. Brown Convention Center, the largest exhibit hall on the first floor was being prepared for Breakbulk Americas —a conference for large-scale shippers and cargo companies. (An aside: people complain about art jargon, but this critic finds corporate portmanteaus and jingoisms more offensive: a Breakbulk conference banner outside the convention center proclaims of “micro-seminars” and “swim-up sessions”). Houston’s art scene has always been predicated on the oil business and its related industries (shipping included), and so the fact that contemporary art is spatially “floated” atop petroleum, is too good to ignore.

There’s a vast heterogeneity, as with most any fair, to the quality of the work being shown. And if a viewer can get over their internal critic (“What are woven baskets doing here?” or, “Word Art? Hate it!”), the experience can be pretty enlivening. That the work of Camel Collective and Yoshua Okón (both appearing at the booth of the youngest gallery in the fair, Parque Galería) are shown a short walk away from gee-whiz, colored pencil relief sculptures of Federico Uribe (Adelson Galleries), or the barely tongue-in-cheek art historical riffs of Chris Antemann and Deborah Azzopardi (Cynthia Corbett Gallery) is indicative of the fact that we live in art worlds, not an art world. Good medicine or depressing news, depending on your outlook. This goes for the visitors who came out to the Texas Contemporary as well. Beyond the collector’s VIP opening night party, for the most part, fair attendees tended to be middle-class folks, perusing the fair on a weekend afternoon and then maybe later going to the Greek Festival in nearby Montrose for some souvlaki.

Perhaps, then, I should return to my initial comments regarding the unoriginality of critiquing an art fair for being the art market’s prima facie. I actually don’t mind that an art fair is the face of a system that places an exchange value on art and what artists produce—I’m truly happy to see artists and their gallerists get a payday—rather, I care what kind of Capitalism is being invoked in the framing of the fair. Saying this will no doubt drive all my hard-liner Marxist friends mad, because there is only one kind of Capitalism in their view, in which everything is a piece, but stay with me, comrades. The aforementioned treatment of the non-profit spaces at the Texas Contemporary, for example, is not just a nitpicky gripe about wallspace and placement, but rather illuminates, because it cleaves too closely to the ways in which non-profits have to scrounge, beg, and vie for limited economic resources outside of the convention center walls. In other words, the Texas Contemporary takes as its model a strand of corporate Capitalism that imagines itself to be beneficent cultural patrons, the motto being “something is better than nothing.” The treatment of non-profit art spaces who can’t or won’t shell out the significant sums of cash for a proper booth, re-performs the logic that non-profit spaces are loss leaders in purely economic terms, without paying enough attention to the projects and energy they could bring to the table. Seeing Project Row Houses, a storied Houston institution,which has consistently drawn attention to the complex racial politics of this city, given five feet of space to play with is not only depressing, but demoralizing. The flip side of this could be valuing and gifting non-profit spaces a significant (or at least equal) amount of space to realize projects and programming that could be central to the art fair experience. It’s a tricky proposition to be sure, because the danger would then become how to make use of the goodwill and talents of non-profits and associated artists without grossly instrumentalizing them. Still, I think we can agree that such a scenario would be better than a ghettoized section near the bathrooms.