Talking Back to Power: Tania Bruguera at YBCA, San Francisco 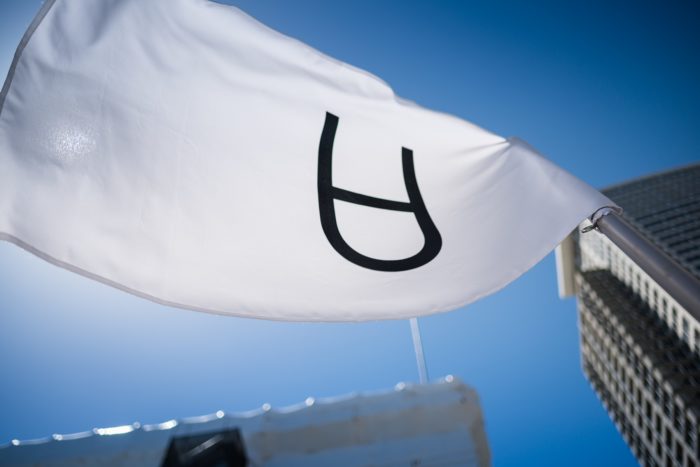 Before I even entered the building of Yerba Buena Center for the Arts (YBCA), Tania Bruguera: Talking to Power / Hablándole al Poder presented itself to me in the form of a bold orange billboard. Placed in an exterior courtyard facing a busy downtown San Francisco intersection, the billboard at the time stated quite plainly: “There is no ambiguity. End white supremacy now,” presented only days after President Trump dismissively equated the violent actions of white supremacists to their counter-protestors in Charlottesville, VA. The sign’s words, I later learned, came from YBCA staff rather than the artist herself. However, the sign is part of her projects, and the responsiveness to current events falls right in line with Bruguera’s goal to activate regional-specific politics in the everyday through her exhibitions and artistic practice. For Bruguera, this is not “just art,” and we are not –ever– “only” in an art gallery.

As I rounded the corner, Bruguera’s art confronted me again. This time, in her own words through an electronic billboard that tallied yes or no votes to the prompt, “Borders kill. Should borders be abolished?” I gazed at the 800-some yeses and the 300-plus no’s, feeling the weight of a different simple, but hefty statement.

When I entered the exhibition, her artwork again caught me off-guard, but this time with an ancient-looking creature. In the center of the room stood a formidable life-size figurine covered in thick dirt. With nails sticking out all over its body, the eyeless figure was menacing. Only thin, pale plastic hands were uncovered to reveal the mannequin underneath.

A video projection showed a performance in which this creature “came to life” –with a human underneath the caked mud– and walked out of a gallery, into the streets. Inspired by the Kongos’ (of the Democractic Republic of the Congo) power figure nkisi nkondi, Destierro (Displacement, 1998-99) represents the spirit of the Cuban people who awakens in order to make good on the promise of revolution that has yet to happen; even without this specific cultural context, the artwork haunted me as a symbol of a popular consciousness, political betrayal, and a building hunger for change. It’s an appropriate set of themes to introduce Bruguera’s thirty-year career. 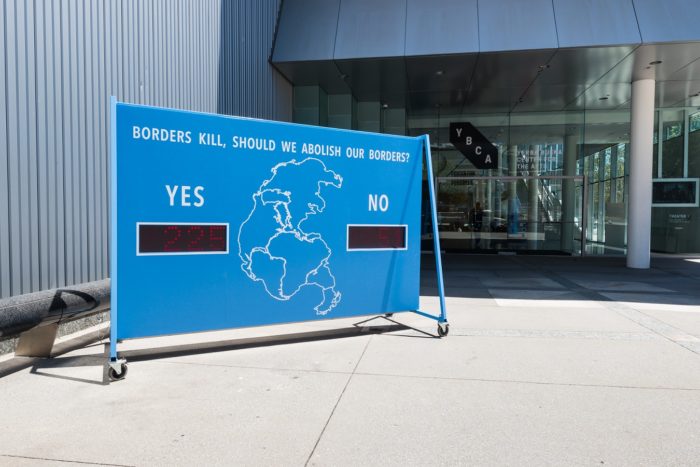 The exhibition is the first survey of Bruguera’s long-term projects, and the curators included a good deal of context to help American viewers (who may be less familiar with Bruguera) to understand the artist’s specific methods. Though she’s not a household name by any means, her notoriety as an artist who’s been arrested and detained multiple times by the Cuban government in the past several years has received mainstream media attention.

Unlike other contemporary artists who stir up news headlines, Bruguera is uninterested in shock value –though this statement might be hard to accept regarding an artist who more than once played suicidal Russian roulette while reading her manifesto on making art that fosters social engagement. Autosabotage (Self-Sabotage, 2009) seems out of character for Bruguera’s practice, at least within this exhibition. What does carry over into the other works is the artist’s unwavering, confidence as she calmly interrupts established social norms.

In contrast to that work, most of Bruguera’s projects are performative and participatory. They are staged in a way that seamlessly integrates the artwork’s actions into real life, tinged with an imaginative, philosophical, and socially-minded optimism. 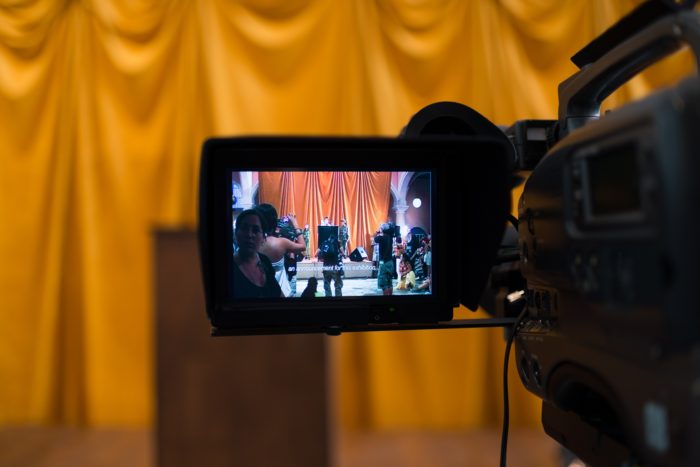 For example, the tally for the electronic ticker outside the building comes from a voting ballet inside the gallery –Bruguera’s Referendum (2015-16). Top of mind in California is the treacherous, arid, and heavily policed land between the United States and Mexico, with Trump’s insistence on building a border wall and recent pardoning of brutalist Sheriff Joe Arpaio. As I dropped my vote inside the tin ballot box, I wondered how much my participation mattered. It felt like almost like a game. I’d be another vote for abolishing borders, yes, but what about beyond the scope of the gallery? Days later, I’d realize that may be exactly the point: to spur viewers like me to ask ourselves the same question.

Another artwork relies more heavily on participation –and raises the stakes higher. The 2009 performance, Tatlin’s Whisper #6 (Havana Version), gave a literal platform to Cubans to speak freely for one-minute. The stage and podium, backed by a lush gold curtain, was re-installed in YBCA’s gallery; footage of the performance can only be viewed by stepping up to the screens of two video cameras on tripods. The weight of this art, this action in Cuba is underscored by the government’s suppression of Bruguera’s request to recreate the work in 2014. This work is part of her commitment to useful art (arte útil). In a video clip [1] Bruguera stated, “I hope [that] one day freedom of speech in Cuba doesn’t have to be a performance.” This framing helps me understand the works that verge on game-like in their simplicity. It’s this hope that drives Bruguera’s questioning to audiences and to governments –to all humans. 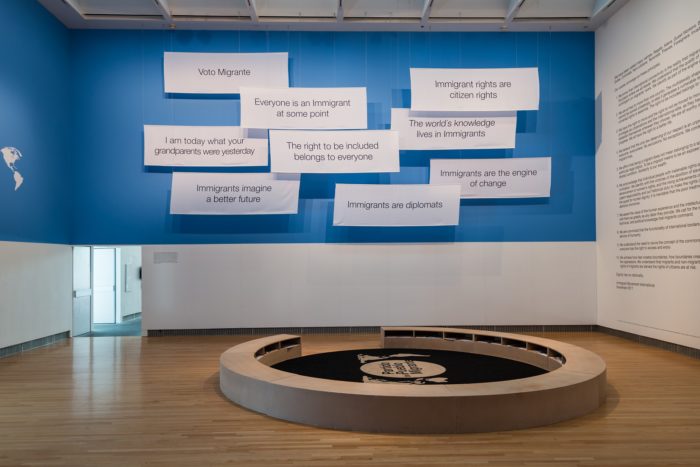 As another aspect of this complex, thorough exhibition, Bruguera activated Escuela de Art Útil (School of Useful Art, 2017­-ongoing) by inviting local art students to participate in special coursework. Although documentation of the classes remains in the gallery in the form of notes and video footage, the archived space left little for other viewers to explore—a sense that the moment had passed.

In contrast, a nearly empty gallery absorbed my attention. Held within an airy room with draped banners, Immigrant Movement International (Movimiento Migrante International, 2010-ongoing) is a flexible project that focuses on global immigrant rights. A manifesto printed onto the walls in both Spanish and English (and available in printouts in other languages) held my gaze as I sat on a circular bench. Although I was the only visitor at the time, the architecture distinctly suggested a gathering space.

This specific gallery is dedicated for free access as a meeting space for local regional organizations working on immigrants’ rights during the exhibition’s run. This new project, Party of Migrant People’s Assembly (2017), was created for YBCA. No, let me correct myself: The project was created for people, and is within YBCA.

It’s a reminder to me that for Bruguera, and for us if we choose it, a gallery is more than a room for art. Activating a space, voting “without consequence,” and a performed platform for free speech are art works, and they are more than art. With Bruguera’s projects, we can test out new realities and attempt seemingly unfeasible goals. But what does this really do? 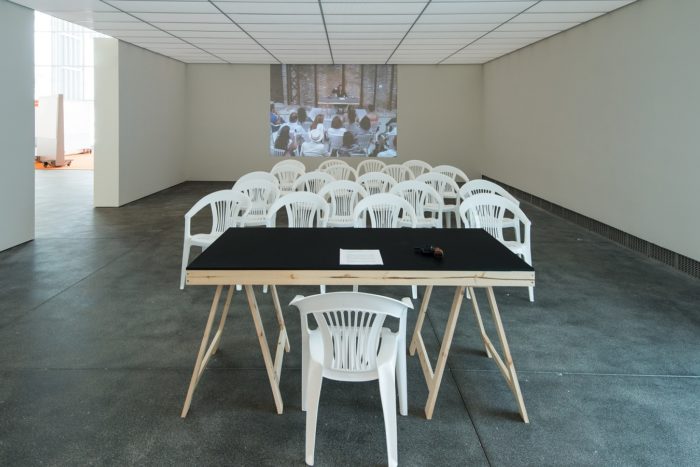 Bruguera prompts us to recall that we are always in the world, always engaged with power, and art is only one way of manifesting ideas that can lead to new ways of being and living. From her early works like Destierro or Autosabotage to her ever-evolving Escuela de Arte Útil and Immigrant Movement International, Bruguera uses art to exemplify new possibilities by living them out in real time and inviting us along. New realities aren’t utopic; they are accessible, and we are empowered to want them, explore them, and—even if for only for one minute on a stage in Havana, or a brief ballot drop in a gallery—to live them. Even when power, through the form of government, racial oppression, or anti-immigration policies, tries to stop us.

Bruguera is unwavering in her refusal to accept the status quo. Rather than dictate a solution, her projects prompt empowered responses through engagement. She repeatedly asks us to never stop asking questions about power. Who benefits? Whose voices are left out? Who is trampled underfoot? What other ways of living can we imagine? Art is essential to change-making, but only when it encourages daily, incessant questioning. If there is one take-away from Bruguera’s mission behind her art, it is: Never stop talking to power.

[1] The clip is from Bay Area filmmaker Lynn Hershmann Leeson’s documentary Tania Libre, which premiered at YBCA in June 2017.