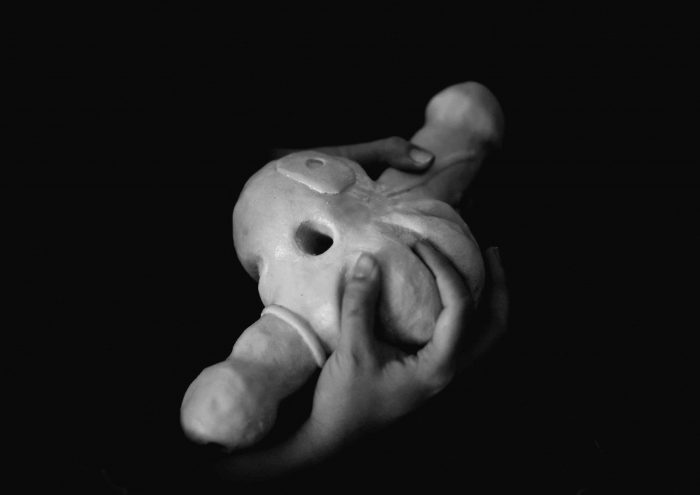 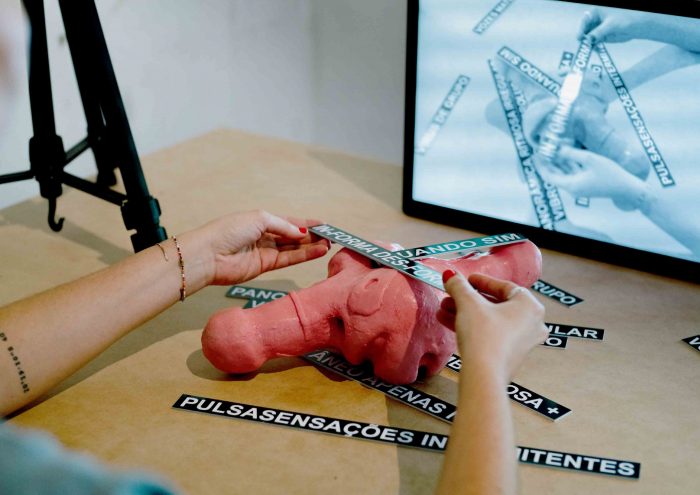 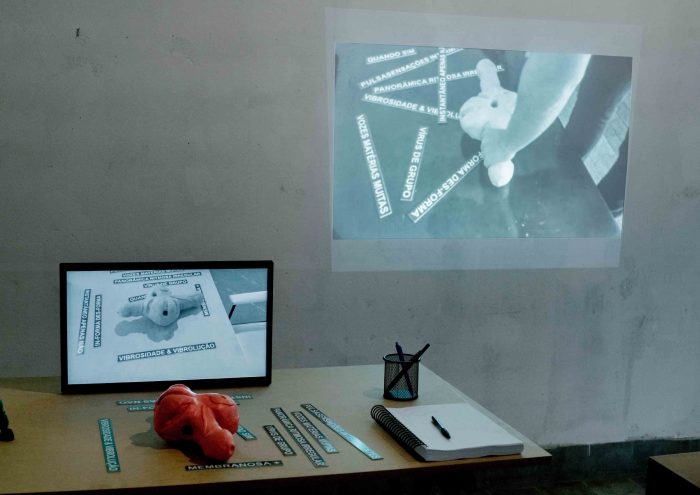 The project 1:1 explores the relationship between the gallery and its urban context through the connection among the exhibition space and other pre-existing places in its vicinity. In each of the project’s editions, an artist is invited to conceive a bipartite work, which occupies an exhibition room in the gallery and, simultaneously, a second space within the neighborhood. This other location, which already hosts its own uses and functions, is chosen by the artist and situated within walking distance from the gallery. Thus, to understand the totality of the works, the public will have to go from the exhibition room to a certain place in the neighborhood or vice versa.

These routes will take place in the region of Vila Buarque and surroundings, downtown São Paulo, an area where a great variety of local establishments, services, institutions and others, intersect with a diversity of classes and social dynamics. Such plurality produces a vast repertoire of forms of appropriation and experience of space ranging from the coexistence to the friction between its various agents, such as the civil initiative, the public policy, the private speculation or others. If these networks of relationships contribute to the unique character of the neighborhood, they are also symptomatic of broader social, economic, and political processes that structure the city at the macro-scale.

By creating a correspondence between the art gallery and a series of other locations within its surroundings, the project not only intends to potentiate an intersection between the artistic proposals and the socio-spatial dynamics of the place, but also to speculate about this correlation. If proposing a succession of works to the exterior of the exhibition space could enable a more effective performance beyond the codified structures of the art system, on the other hand, being outside the “white cube” has never been more within the artistic structure. If art increasingly dissolves into social praxis and does not merely represent or comment on the “real”, seeking to be in direct equivalence with it, on the other hand, it also reaches increasingly higher degrees of institutionalization and commercialization, and this “real” to which it is equivalent, is daily exhibited and consumed with an unprecedented scope, making it increasingly difficult to distinguish it from its own representation.

Taking these and other issues into consideration, the reciprocity between the gallery and a space outside it serves both as a precondition for the artists’ process and as a basis for a critical reflection on the project and on the specificities, potentialities and paradoxes of a state of art that, in its discourse and/or performance, is at 1:1 with “reality.” This reflection is developed not only through a sequence of artworks, but also through the correlation between them and a body of research which is structured in two groups of texts that are presented at each edition: one that discusses individually the exhibited works, and another that explores the various implications of the notion of 1:1 in relation to the field of art.

Although structured around pre-established objectives, such research does not follow a linear model or pre-fixed trajectories, instead, it remains close to the reflection and production of the invited artists, which are crucial for the outgrowth of questions that continually (re)orient and (re)structure the critical themes, domains and parameters of the project. Rather than providing a simple entry point to complex ideas, or fulfilling an exclusively contextual, mediating, or justifying role, the synergy between the upcoming texts and the artists’ works intends to open up a field of relations and questions that amplifies the encounter with each one of the artworks, and also with the project in its entirety, without, however, prescribing a single understanding or refusing an essential degree of opacity.

A closed-circuit video camera system captures images from the exhibition room at the gallery Jaqueline Martins and from a private dwelling in its surroundings, transmitting them in real time from one place to another. The framing of the cameras do not show the totality of these places, instead they do a close-up on a group of objects, which is duplicated and placed in both of the spaces. Each of the sets consists of an item in silicone, a series of printed writings and a notepad where new elements can be transcribed. Both the users of the domestic space and of the gallery are invited to exercise themselves from the handling of these objects, an action that is filmed and transmitted between spaces. The video images are periodically recorded and archived for later use in other videographic forms. After residing for a period of time in one domestic space, the set of objects outside of the gallery is taken to another dwelling, and so on, making this system sequentially connect the exhibition space to a series of dwellings in the neighborhood.

The system-nomad enters the various domestic rites and rhythms. Its arrival is negotiated, anticipated and authorized by its hosts, under the condition of a temporary stay. The system-guest is accompanied by the live images of its “double,” located in the gallery, and transmits a fragment of the domestic space-time to the exhibition space. The presence of this system-double is both corporeal and chimerical, underlining the interchangeability between inside and outside, between transient and fixed, and between belonging and aloofness. Such dualities, inherent to the very condition of the guest, contaminate the intimacy and interiority of the private sphere, creating a breach in the membrane that separates it from the outside. Even at the mercy of its host’s rules, the guest’s presence automatically institutes another temporary system within the pre-defined mechanisms, triggering a reaction —reorganization of the frame that hosts it. The system-guest, established between the gallery and the residence, encourages and welcomes the participation of the users in its workings, becoming the host of an interaction between its objects and the different subjects that manipulate them. The handling of the pieces, when filmed and transmitted between both places, concurrently becomes a performative and a voyeuristic act. On the one hand, it is an action performed to a distant receiver/audience, on the other hand, it is the contemplation and testimony of the activity that is being executed at a distance.

The static shots of the videos show the pressing, stroking and gripping of the hands over the protrusions and recesses of the silicone piece. The shapes of the object do not refer directly to anything known but are strangely familiar and close to the body. Its design does not follow ergonomic rules which would aim to raise the efficiency levels of its handling or to optimize the accomplishment of a certain task. Its “anti-ergonomics” and tactile materiality seeks to establish a familiarity with the touch, stimulating the manual interaction and the corporal apprehension of the object’s silhouettes. In the videos, the rhythm, the strength and the expressiveness of the hands, while handling this “in-utensil,” produce a narrative that is thickened by the written fragments located around the object. The printed words and expressions are continuously reorganized and recombined by the users of this system, and generate, at each new configuration, different messages and other syntaxes. The object and the words not only incite participatory circumstances but also the production of a thought about this process, which the “participator” can express through his own calligraphy on the notepad included in the set of objects. In the captured images, the relationship and negotiation between the protrusions and recesses of the silicon forms, of the handwriting, of the printed words and of the hands’ physiognomy, create a silent dialogue, a modality of interlocution where there is no predominance of a true single language and where any meaning is relative and provisional. In the absence of action, the video cameras witness the inert objects, still-lifes that manifest the messages left by the gesture and the body as discursive tools.

The system is a generator and disseminator of communicative processes. The invitation to manipulate the items and the words is also an invitation for conversation. Dialogue. Soliloquy. The geometry of language structures the corporeal existence of the “self” and articulates its relation to the “other.” Touch is one of the most effective forms of nonverbal communication in the transmission of a message and is also one of the most effective ways to create a bond between individuals. Feeling the bodily topographies of the silicone piece brings the individual into his own body, while also connecting it indirectly to the body of the “other,” which manipulates the replicated object at a distance. The piece is simultaneously a vehicle through which one has a concrete bodily experience and a symbolic extension of the subject towards the experience of the “other.” System-prosthesis. The shapes of the silicone object attribute a specific quality to the nature of its manipulation, which refer to the different modalities of intimate touch. This type of physical contact, considered private and personal, circumvents the logical and educable part of the mind and enters the primitive brain, the place of instinct, memory and desire. The intimate touch is the pinnacle of individuality and subjectivity, represents the closeness to oneself, self-discovery, the “self” that opens outwards, the understanding of the other and of otherness. But at the height of its nontransferability, intimate touch is also something profoundly collective, transversal to all, as a common, fleshly, denominator, that unifies and levels all. Universal language. Ecstasy.

The domestic space is the place that generates and preserves intimacy, allowing the maximum expression of individuality and subjectivity. It is also a device through which collective values and behaviors, which are above individuals, are implemented, unifying and leveling them. Habits and hierarchies produced in the micro-scale of domestic everyday life reverberate in the macro-scale of the socio-spatial dynamics. Conversely, “official” discourses convey the notions of “domestic” and “home” to political, economic, and ideological purposes. Today, the “home” is increasingly a permeable structure, which receives and transmits images, sounds and data, within a virtual relational network where the boundaries between the domestic and the public, and between individual and collective, distend and dissolve. The “intimate sphere” becomes a spectacle, a currency for exchange and an object of political management, carried out through technocapitalism, biotechnologies, global media, social networks, and  the citizens themselves. The res publica dodges away from the public and enters the intimate-domestic; it becomes omnipresent and dissipates. The exponential expectation of intersubjectivity and interactivity creates colliding nexuses between participation and voyeurism, between attachment and disconnection, between individuality and impersonality, and between the “self” and the “other.” For the ocularcentric and vigilant society the camera is the prosthesis of the eye. In an amnesic society, the recording is the prosthesis of memory. Fast-Forward. Friction-Fiction. Introjection-Projection. Replay. The History in loop.