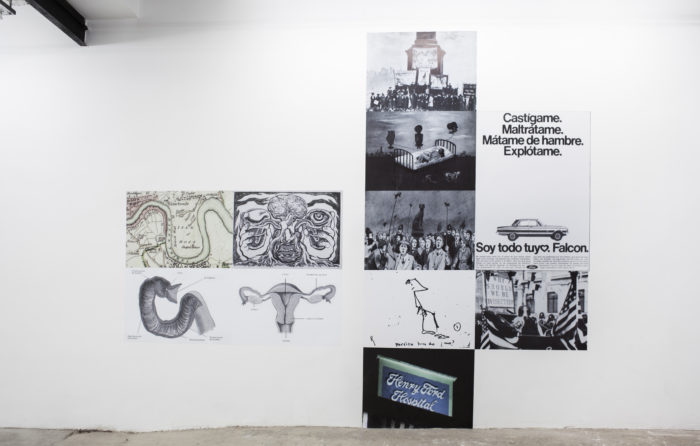 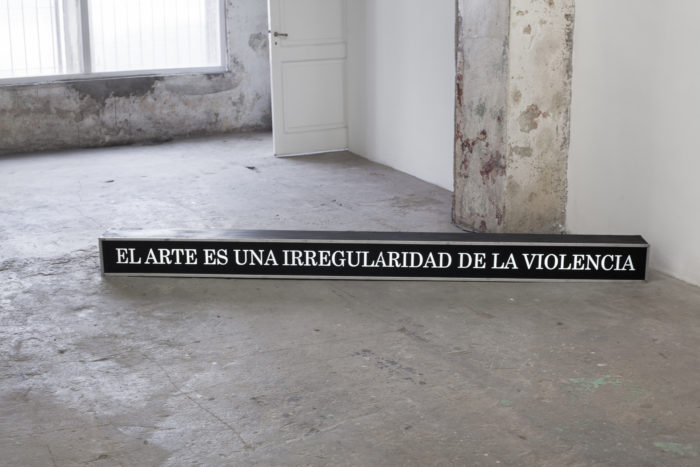 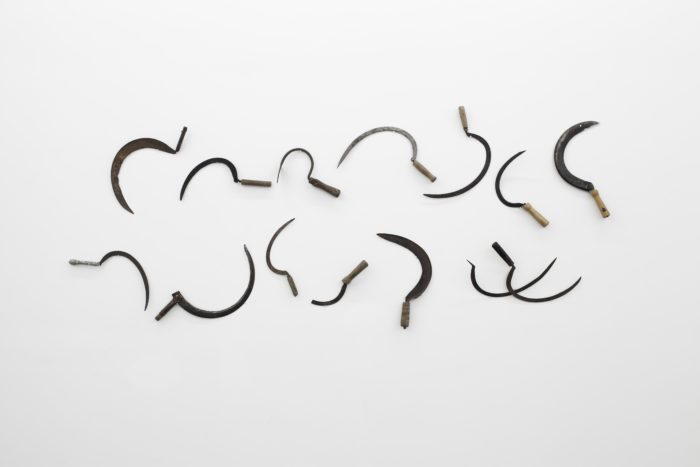 Resting on the floor, hanging, or affixed to walls. Almost all lead gray. Some closer and some further from the referent. Wild and light weight. Firm and rickety. These works shake up writing. Some of them make use of the word, others of a materiality associated with printed records; some are even translations of the meaning of objects.

Elena Loson’s works are like double agents. Stones, blocks, and dark pages, her works—all of them graphite—are a splitting of drawing into both writing material and surface for printing. They tint everything they touch in gray. Susana Gamarra’s red lines are yielded by friction. With the pressure of her teeth, she enacts a salvage return to the primary act of writing as trace with minimal indicial distance. And in the summation of intensities, like in a pressure cooker, Verónica Meloni scratches and drives into the wall, writing in black ink and sickle, inventing an exaggerated graphism for a pressing time. Writing on signboard makes its way in*.

From signboard to poster, from poster to advertisement, Gamarra’s random photos and illustrations shake up mental connections. Like an oracle, her ideas come out by dint of repetition. Lucas Di Pascuale, meanwhile, utters a single precise statement. He does so, paradoxically, on tracing paper in an austere manual exercise. He names and projects an ethics forged with patience.

With the minimal resource of a circular poem on an endless path, Ivana Vollaro writes surfaces with lighthearted humor. She looks to a round figure to open the poem up to drawing and wall. Her signalings decorate limits, mock exclusivity and appearance. When she divides, she is joining the sides of a plane. The ropes tie up, hold back, separate, come loose, and braid— like Meloni’s poster light, which sets off a white noise, a presence.

The trace of a broom brushing across the floor, the movements of vague things. Eugenia Calvo fastens a mirror with metallic firmness. Though the reflections follow their course, she makes marks, defines surfaces and paths. Domestic choreographies, musical fables, her graphics design a daily rhythm.

Lucas Di Pascuale accumulates movement and time with a doggedness like the color black. Total drawing. And its opposite as well. Recursive strokes, pages riddled with layer upon layer of ballpoint-pen lines. And a minimum graphism that grows in the simplicity of a letter—is, perhaps, the line’s value as connector what drives that growth? Like Vollaro’s enlargement, what we find here is a generous concision of poetic marks.

A poem says “writing is about reinstituting the distance/between what we hoped for and what there is.”

[1] Tossed onto itself like a stone to the sun, each work here reinstitutes the measure of some distance.