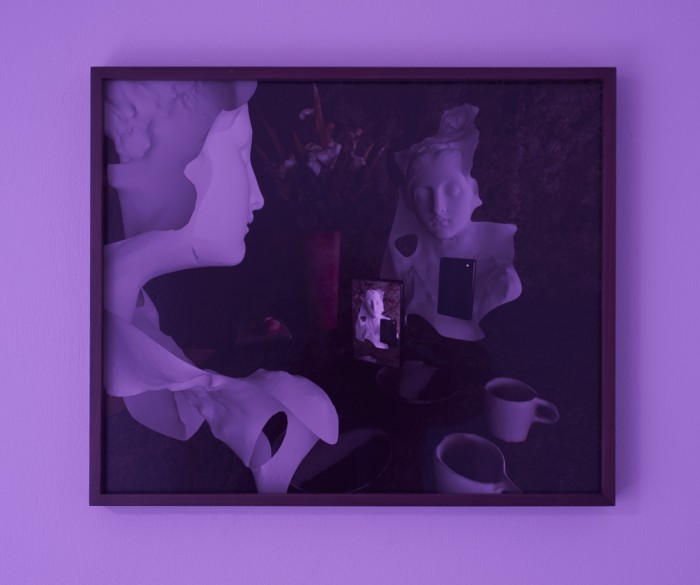 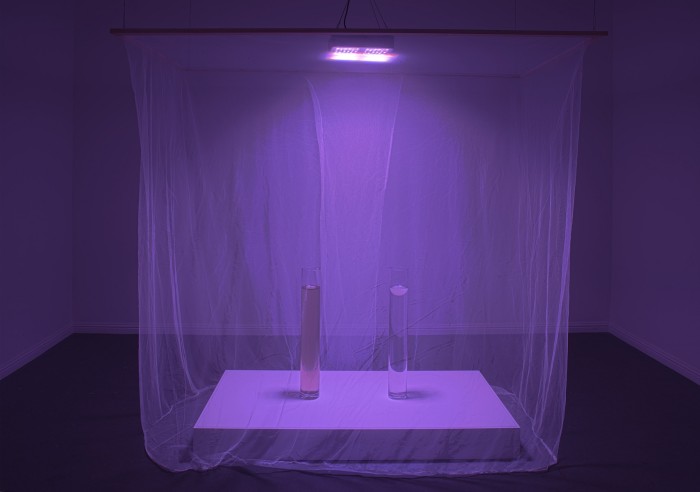 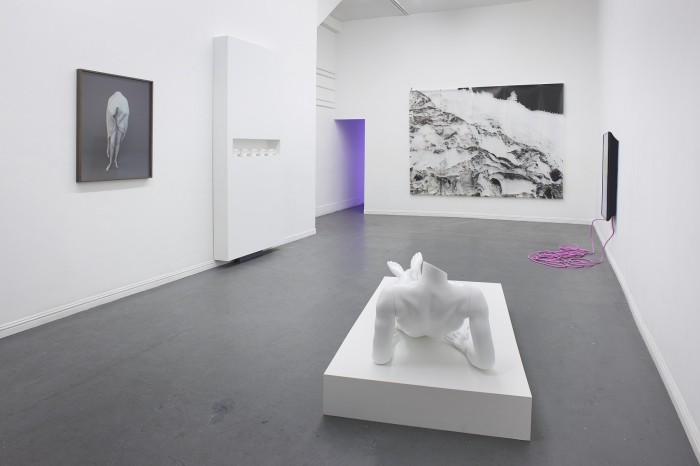 Holberton’s work explores the way technology reshapes the relationship between humans and our physical world. As the title Still Life suggests, this exhibition utilizes material and process to transgress the boundary between stillness and life. Unexpected parallels emerge between the organic and constructed such as value and waste, self and other, cognition and physiology, and real and representational. The cool façade provides a smokescreen for strange pairings and the subversive use of manufacturing as medium. Utilizing materials that run the gamut from gold dust and mosquitoes, to psychic readings and mannequins salvaged from the American Apparel bankruptcy liquidation, these objects are not simply things in themselves. Rather, they carry a coded memory of their personal, material, and cultural relations. The works weave together to form a surreal narrative documenting the artist’s attempts to make sense of our humanity within massive systems that can only be accessed through a technological lens.

The works on view provide visual antiphon to the investigation within three groupings in the gallery. At the entry of the gallery is a headless male mannequin casually presiding over the goings on in the gallery. On the walls in the front room, 3D modeled images are woven into tapestries (Just This One Thing series) and animated into a digital video (The Drone is not Distracted by the Perfume of Flowers). These representations soften distinctions between illustration and allegory through the restaging of real objects that have been scanned and represented in virtual space. Taking cues from Instagram aesthetics & the curation of posts as expressions of self, these 3D renderings engage the historical context of computation and automation. The video installation, /no stats on the same, utilizes motion capture data from the artist’s own body movements transplanted onto a scan of a male model as an exercise in becoming other or mapping one’s avatar onto another biology. The performance of the artist and the virtual environment are both plotted onto the dimensions of the existing architecture of the gallery; uniting the space of two physical locations through the projection of virtual space.

In the rear gallery, a netted veil is suspended from the ceiling illuminated by a full-spectrum hydroponic grow-lamp. Inside the net housing, mosquitoes feed on sugar water near recently harvested California gold measured by the gram. On the one hand, the works model extraction as method for value creation vis–à–vis material transformation through labor; the artist with the gold, the mosquitoes through blood meal. Meanwhile, the production and processing of marijuana are poised to take on the role of the next major viable California industry. On the other hand, the metaphors and histories of these very material things are embedded in stories of digital technologies, climate change, religion, and politics in ways that connect back to corporeality. Today, the technologists of Silicon Valley are compared to the 49ers of last century’s gold rush; both activities of value creation belong to a similar narrative belonging to a masculine entrepreneurial ideology. Similarly, it’s hard not to think about the mosquito without thinking of the virus, currently one closely associated with fertility. These works offer a reminder that while the bio-technical divide grows ever more transparent, we are still very much dependent on the ‘six-inch layer of topsoil, and the fact that it rains.’