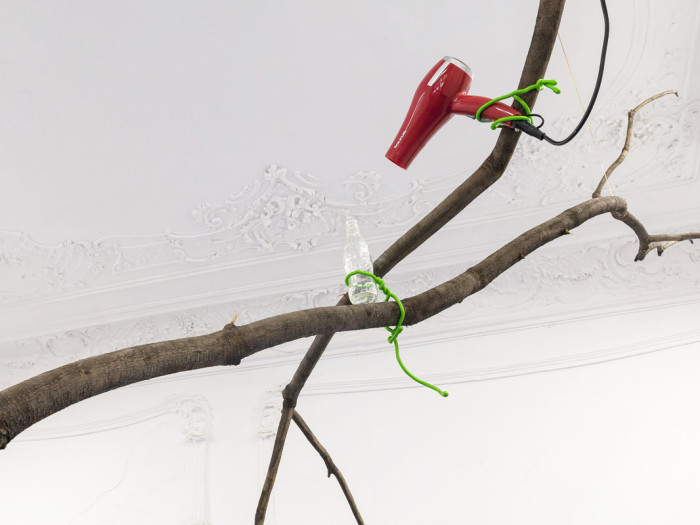 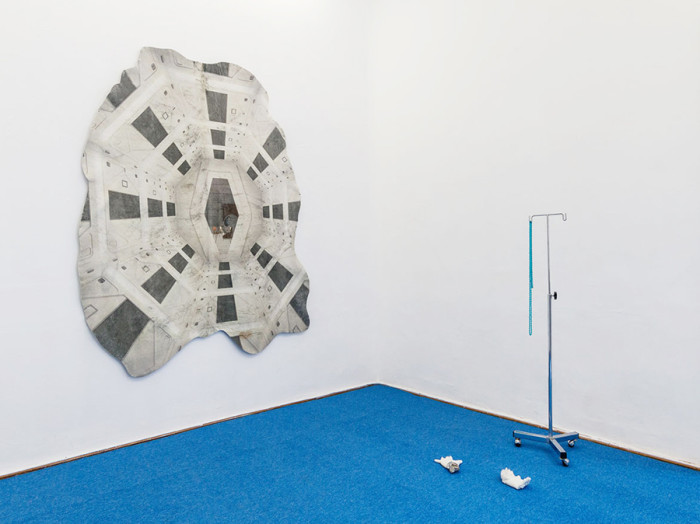 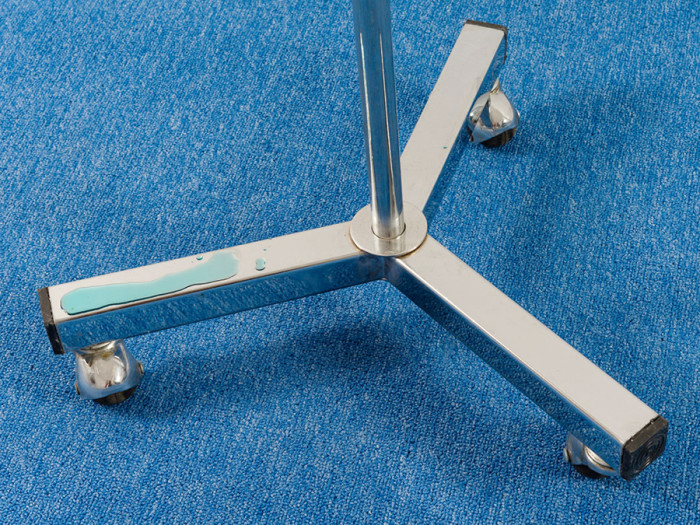 The show Seeing Double at Marso Gallery, is a culmination of a six-month residency in Mexico. A conversation that started with her recent work on transferring the matter of recreational drugs to negatives and resulting in photographs, as well as the book, All you can feel focused in these experiments.

Seeing Double, introduces a paradox, the body as an administrated organism by the figure of a ghost rider. As criticism towards the medical industry and its development in capitalism, she introduces a rupture and finds an alternative perspective of healing in ancestral traditions, which the artist investigates through anthropology, shamanism, and experience, taking on account that they have been transformed through time and modified by the western influence. Posing both traditions as ambivalent in which neither is independent from the other; the imaginary turns visible, a narrative full of black humor as this objects become interchangeable characters.

Schoenfeld’s work recalls Deleuze’s concept of the fold, the body as an infinitely changeable skin. The figure of the schizoid; de-codes and destructs every identity and transits from one layer of meaning to another. This figure exemplifies the body organized by capitalism discourse. In this sense, capitalism discourse tends to enclose and abstract the meaning of things, emptying their meaning and responsibility within their historical context, because they are valued from the perspective of their symbolic monetary value.

Unusual thoughts or behavior (Fallen Pyramid); addresses a metaphor of the State, the entrance of a narco-tunel, the distribution of illegality which is defined by a repressive power. This gap is a result of bodily forces, understood as desire, that act in a given organism. The production of this piece is the result of an assemblage made from various photographs of the entrance of a narco-tunnel, causing the perception of a real object by a virtual memory.

Its spell obscures our view of the ruins of failed modernism that we psychically traverse, leaving us anemic, weakening our ability to pick up the discarded, the abandoned and the lost, to make new in a manner that challenges the monstrosity of capitalist realism. We are left instead, stuck in the present, continuously distracted by the spectacle that capitalist realism produces, like a child entranced by a cheap shiny thing. (1)

Fruit like breath (coke organ), opens the exhibition. It is a sound piece and installation that addresses Greek mythology; the figures of the sirens through an enchanting sound take the sailors to their tragic destiny. The call represents the moment when the pharmakon is offered as a remedy, this moment represents a domesticated body. Capitalism as a pharmakon, a “surplus” signifier, representing an extraordinary organ, while being the cure for a symptom, also produces an addiction and a sickened spirit.

It is a short step from side effects to ‘collateral damage’, a phrase used by the military for the unintended consequences of military actions, which should remind us of two things I have mentioned: the same machinery was used for making both bullets and pills; the Greek word Pharmakon could mean either remedy or poison. (2)

Seeing, Hearing Or Feeling Things That Are Not There (Shaman Coat), represents the voice of the magician, a voice of authority embodied, the place of the magician is the place of the doctor, the corporate enterprises, the drug legal and illegal industry, whom feed everyday bodies that become dependent, that have lost its own self healing power. Machines destined to toxicity and a precarious life, sickened spirits, artificial in an idyllic scheme of health. The Shaman Coat, with an image of the film Space Odyssey, affirms the ideal of health, which mask hides, the principle of toxicity and capitalism. In the journey to another world, that at the same time represents the world of knowledge from the Shaman.

In Sense Of Detachment From Self Or Body (Hospital Gloves), the invisible hand of power, the white gloves represent the hands of an anonymous master, that distances from the human to a place of specialized knowledge and technic, offering the promise of paradise to a fragile body. Taste Perversion (Chain) is made from medical furniture and sleeping pills, offering a seduction and a sinister feeling, causing the body to disintegrate in the process of becoming “healthy”.

Hallucinations, identity loss, sickness; side effects attach the body to a social pathos that tends to destruction. Hallucination (Spiritual x-rays) is made from side effects of prescription drugs displayed in a mirror, for the spectator to manage in the order of the real the deformation of perception.

I am Hanna and I am manic-depressive. I am a rapid cycler, I am either up or down, and I am not much in the middle, or at normal (if you want to call that normal). I realize I expected the pills to manage the manic depression, and now I see I need to manage it at all levels, including the spiritual. I need to learn more, to exercise more, to be active not passive. My shift in thinking is due to taking Depakote—it is like a new suit of clothes! I am a snake who has shed its skin; I am all new and shiny. (3)

Seeing Double highlights the invisible evidence of capitalism, which through its historical process has erased their disasters by repressing memory. Within the medical scheme the individual is dependent and becomes a passive organism. The immediacy of the available pill is the only resource for the present disorder. Without past or future, the condition of the body remains as the imaginary illusion of sanity in the promise of paradise.

Courtesy of the artist: http://www.sarahschoenfeld.de/