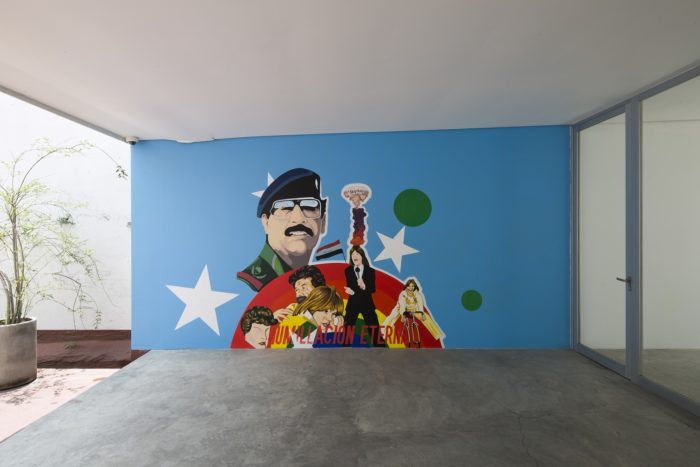 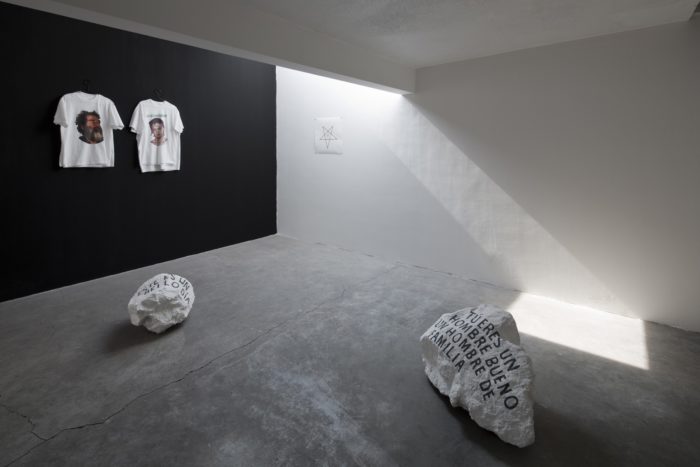 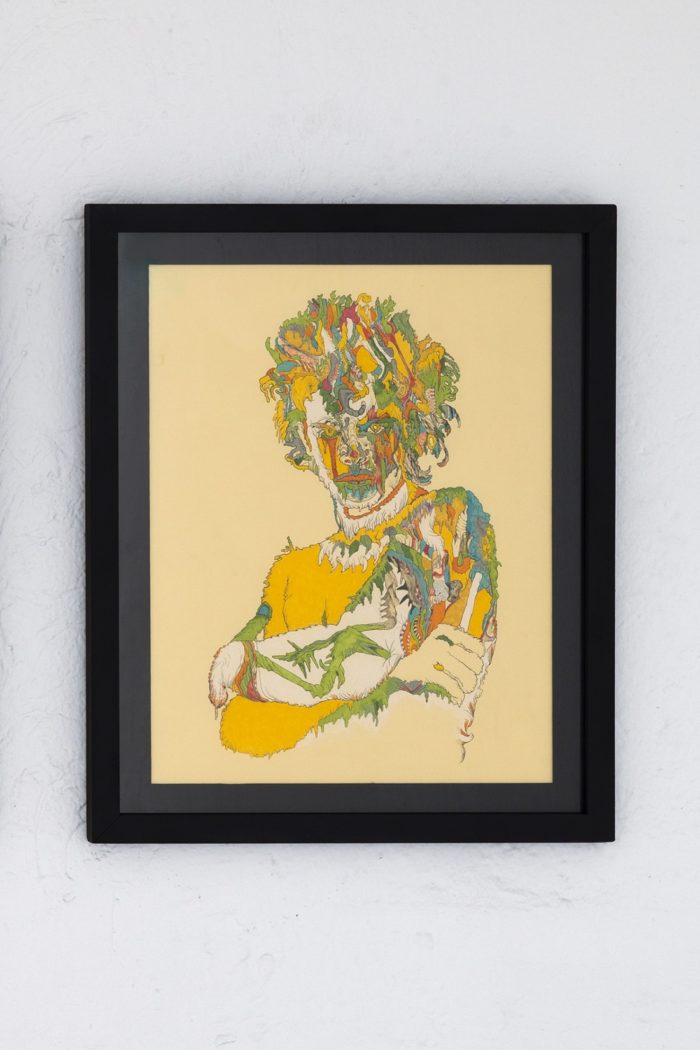 Based on Internet searches, Cristian Franco collects songs and leitmotiv that have been used as tools for social manipulation, torture or confusion, and that have generated conspiracy theories. The artist uses them to create soundtracks of tragic events. Although their reliability may have not been proved, Franco looks for not-so-trust-worthy sources on purpose, allowing him to materialize the production process with different media, like silkscreen, drawings, digital print and sculpture.

Speculation and rumor find a place in the works. Even though the pieces start from sound references, they trigger interpretations that not only require the critical involvement of the spectator, but also his/her humor, because they show the paraphernalia, ways, and characters that surround the musical and political scene. For his exhibition Sangre de yegua preñada [i]—referring to a torture procedure performed on cattle— in PARQUE Galería, Franco has chosen three historical moments in which he identified songs/theme songs that are ironically associated with the decay of personalities that marked the national and international political life:

1. Song: La Culebra, played by Banda Machos
Event: The assassination of Luis Donaldo Colosio in Tijuana, 1994
News: La Culebra, one of the most popular songs by Banda Machos, was playing as background music in a rally that took place in Lomas Taurinas, Tijuana, headlined by Luis Donaldo Colosio, candidate to the presidency of the Republic by the Partido Revolucionario Institucional (PRI). While he was making his way among the crowds, who responded to the call of the favorite candidate for the election, a man shot him in the head. A few hours later, the candidate had passed away.
In the only video recording [ii] of the event, one can see that, in the middle of all the chaos, Colosio’s fall, screams, and panic, the music never stopped.
*** It is speculated that La Culebra was actually played out loud as an indication to murder the candidate, because as the lyrics says: ““¡Ay, si me muerde los pies! Yo la quiero acurruñar si me muerde los pies. Yo la tengo que matar” (Oh, if it bites my feet! I will want to grab it, if it bites my feet. I have to kill it).

2. Song: Solidaridad, sang by several singers from Televisa
Event: Media campaign for the Programa Nacional de Solidaridad Social (National Social Solidarity Program) during the term of Carlos Salinas de Gortari
News: After winning 1989 the presidential through an electoral fraud, Carlos Salinas de Gortari was urgently looking for ways to legitimize himself as President and to reinforce the presidentialist model follow by PRI’s at the time. In order to achieve this, he created the Programa Nacional de Solidaridad Social, which was advertised as a social justice scheme that worked with the involvement of the people.
However, it was a program with electoral overtones, covered with a mask of irritating nationalism and patriotism [iii]. A strong and high-impact media campaign was designed to support it. Its reach was guaranteed thanks to the continuous broadcasting it had in the different channels of the Televisa monopoly [iv].
*** Under the promise of “ending poverty in the country and making our way into the first world,” one of the biggest obsessions in Salinas’ speech, a Program with spots, music, and slogans that would stick in people’s memories was launched. Nonetheless, the results, once again, were nothing but a speech about a modern and inclusive Mexico. Far from representing an actual social change, Solidaridad turned into one of the most questionable policies in Salinas’ regime. Its high budgets and investments for the propaganda did not translate into social improvement for the alleged beneficiaries of the initiative.

3. Song: Entrégate, sang by Luis Miguel
Event: The capture of Saddam Hussein in Iraq, 2002
News: The American newspaper Mira [v] published an article saying that, during the capture of the Iraqi dictator Saddam Hussein, the record Segundo Romance by Luis Miguel was found between his few belongings. Allegedly, Hussein was an enthusiastic fan of the Mexican singer.
*** Regardless of the fact that the news appeared mostly in showbiz media and was fuelled as a rumor or a curious fact, the artist was interested in this because of the decadent scene created by the idea of the former dictator taking refuge inside a cave in Tikrit, north of Iraq. In its lowest point, while being subdued by the American military intervention, this scene becomes even more tragic when one imagines the boleros playing as the soundtrack of the moment.
Paradoxically, 15 years after, the pop idol is living his own moment of decadence. This is satirized in the piece in which both characters are emotionally depicted.
Policies by the PRI (Partido Revolucionario Institucional), Mexico entering Neoliberalism, dictatorships that have troubled different parts of the world, and American military interventions are all issues that do not concern Franco in themselves. Franco is interested in the collective imagination created from the fake facts that surround them and that invite the public to read them through the pieces. Such imaginary also invites the audience to be part of the process, because, as the artist points, this material will go back to the web in order to feed the huge amount of information that generates every second.

i. Literally translated as “Blood from an impregnated mare”, this procedure, which sounds like the plot of a horror film, is practiced in Argentina and Uruguay. It consists on the bred of hundreds of mares which only purpose is to be impregnated and then plugged into machines that drain their blood, causing them shock, anemia, and even death. Some mares collapse during the procedure, known as sangría, due to the conditions of continuous exploitation (since only the blood of pregnant animals is usable, the mares are subjected to impregnation and abortions incessantly). This intense torture is propelled by European pharmaceutical companies that sell a hormone —which is extracted from serum— that allows livestock companies to control the estrus of swine and other animals and, therefore, to manipulate the mating and reproduction seasons of other species. This act adds up to the list of abuse against animals, exclusively driven by the economic profit of the food industry.
An article on this subject is available (in Spanish) at: “Sangría de yeguas: el controvertido negocio de la venta de plasma de sangre de yegua preñada”, [online], América economía, October 9, 2015. URL: http://www.americaeconomia.com/politica-sociedad/sociedad/sangria-de-yeguas-el-controvertido-negocio-de-la-venta-de-plasma-de-sangr

ii. The video can be watched online: https://www.youtube.com/watch?v=k8Nc2pCE1bc. It is interesting that, although it is an amateur recording, it shows the date and time of the event. The alleged use of the song, La Culebra, as a sign to go on with the assassination of Colosio, is addressed in the article “La culebra, canción con la que asesinaron a Colosio,” [online source in Spanish], AMQuerétaro.com, March 23, 2014, URL: http://amqueretaro.com/vivir-mas/2014/03/23/la-culebra-cancion-con-la-que-asesinaron-colosio

iii. Some of the ads are available online: https://www.youtube.com/watch?v=8i3ZaaUBNbk. They are filled with sentimentality, paternalism, and are clearly aligned to the interests and discourse of the presidency. The ads were all over ad breaks in prime time, so many generations still remember them.

iv. The Program was advertised with a very strong media campaign that was mainly propelled by Televisa. The media company made all of their “starts” available to Salinas’ administration. The celebrities were deployed all over a music video in which different singers intoned Solidaridad’s offcial anthem. Even a record was made. The ad, which can be watched on Youtube (https://www.youtube.com/watch?v=Rc4_t9eRNn8), includes the most famous “artists” of the time: Lucía Méndez, Angélica María, Mijares, Verónica Castro, Daniela Romo, Marco Antonio Muñiz, Vicente Fernández, Lola Beltrán, Pandora, César Costa, José Feliciano, Paulina Rubio, amongst others.

v. The information was taken from different online media [in Spanish], such as: http://www.terra.com/musica/noticias/luis_miguel_es_el_preferido_de_saddam_hussein/oci81495
https://hipertextual.com/2006/04/luis-miguel-y-saddam-hussein
http://tumusicalatina.blogs.com/tu_musica_latina/2006/04/luis_miguel_es_.html