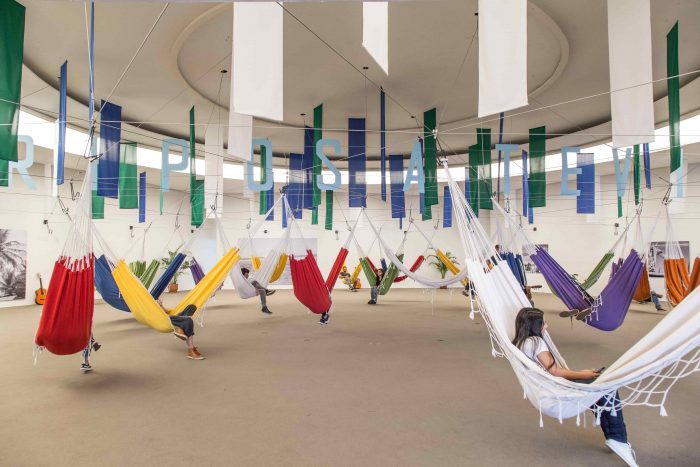 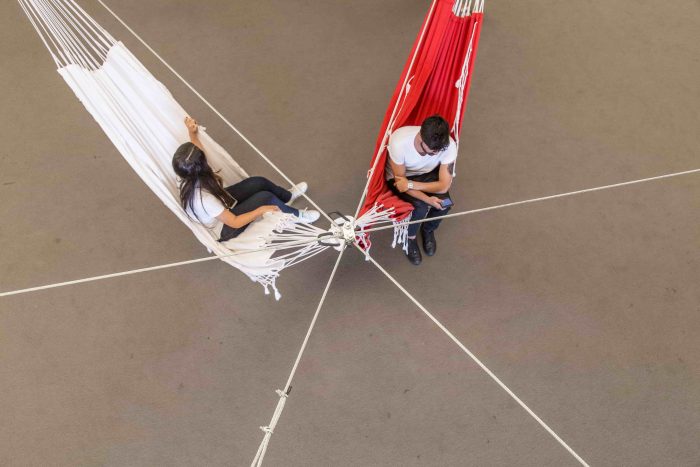 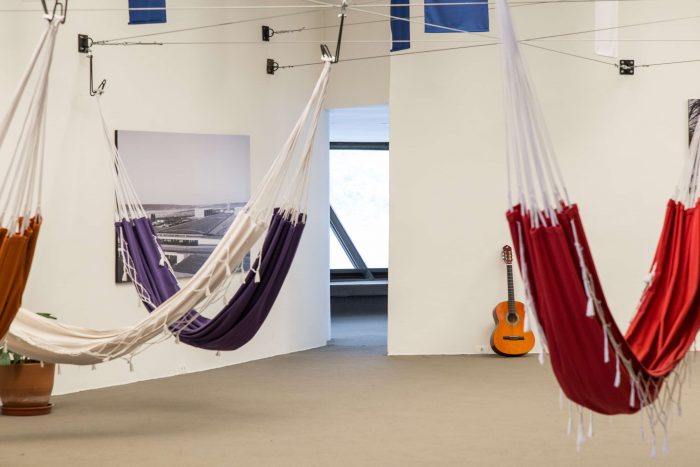 Reinstallation of a show conceived by the great architect and urbanist Lúcio Costa for the Milan Triennial architecture exhibition in 1964, when Brazil participated for the first time. The event took place following the military coup and four years after the inauguration of Brasília.

“Each country was free to think about their participation in this edition of the Triennial. The theme was ‘Free time’ and within that, each pavilion responded differently to the challenge. To Brazil, at the time, the money was short and the space was small. Lúcio Costa’s idea, then, was to occupy the place with 14 hammocks in different colors, white balconies, scattered guitars and plants, where the public was invited to enjoy and participate actively in the work, lying down, sleeping, playing the instruments and contemplating the space”, explained Raphael Fonseca, one of the show’s curators. On the walls, as a way of illustrating Brazil, the architect and urbanist put photographs taken by the French photographer Marcel Gautherot that portrayed two situations: the beach of Aquiraz, in Ceará, where people worked in sailboats; and the construction of Brasília. “This is what he wanted to show: on the one hand, a modern and concrete Brazil, with a brand new capital; and on the other, a different Brazil, from another region, associated with crafts, beach life and with a different pace from that of the concrete capital”, explains Raphael. As Lúcio Costa himself said: “the same people who sleep in hammocks build a capital in the middle of the desert in 3 years”.

At MAC, as the space is much larger than the one used in the Italian city, in addition to the photos, plants and guitars, 28 hammocks were arranged, twice the number used in the first installation. It is worth notice that this is the first reinstallation of the show in the State of Rio de Janeiro—it has only been exhibited in Milan, Brasília, and São Paulo, and now in Niterói. It is also worth mentioning that this is the first time, after Italy, that the hammocks are mounted along with the photographs. “Lúcio Costa pays a great tribute to the act of resting. It is a historical homage; an important reinstallation, within an architectural work of Oscar Niemeyer, the one who helped him design Brasília. The exhibition will be on until 2019, so it’s also a celebration of the 55 years of this installation,” concludes the curator.