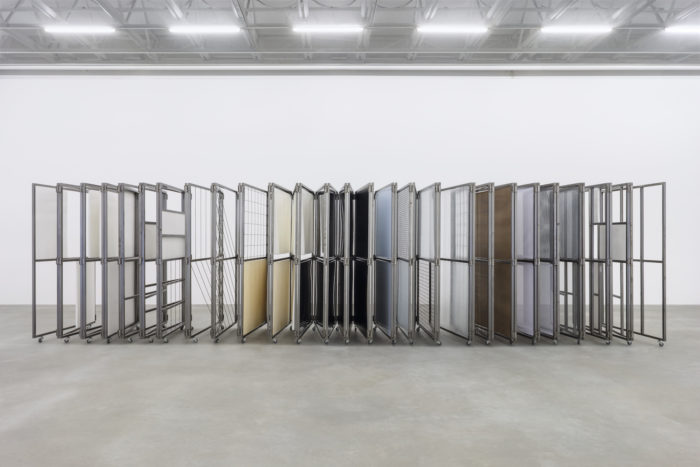 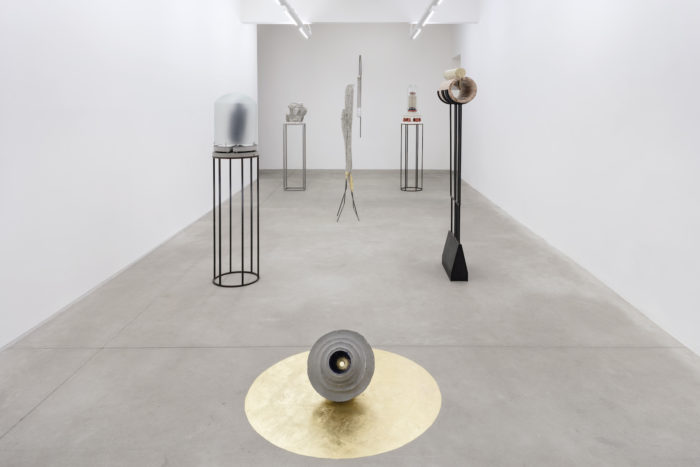 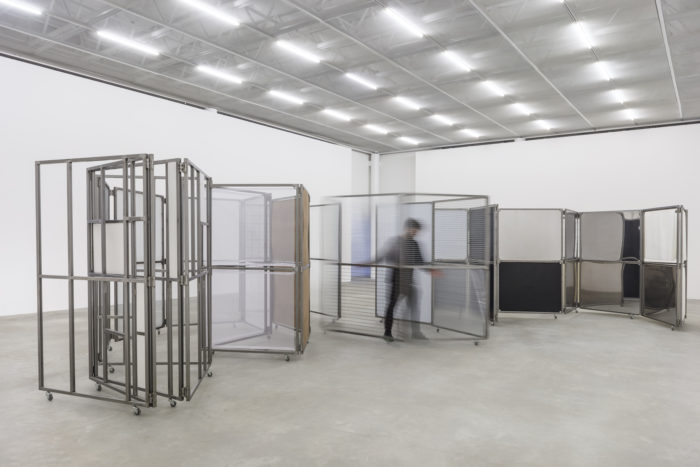 The Portuguese word ressaca translates to either “hangover” or “undertow” in English—in both cases meaning an aftermath or something that produces an effect. The abnormal movement of the undertow of large waves. The physical symptoms that appear when the toxic effects begin to leave the body. The nausea and the storm surge that submerges the coastline. The presentiment of psychological wounds and the promises of change. The currents that drag swimmers and the detritus that gets cast up on the beach. The ressaca foreshadows that what is to come will be different from the past. It is doubt, clouded vision, and projection. The exhibition Ressaca is simultaneously a moment of synthesis and a turning point, it is a culmination and a re-beginning. An end, a letting go.

A retrospective look at the artworks and research that precedes Ressaca will find a work whose scope is mainly defined in relation to architecture, especially the modernist trend and its subthemes, specificities, “ideological lapses”, “weaknesses”, and “unfulfilled promises”, among others. Underlying the circumscribable themes there are divergent wishes and interests that sporadically appear, making it hard to delineate relationships of causality between the work and the discourse. The ressaca reconciles such imprecisions that evince the comfort of that “speech”, making them compatible with a definite message, an intelligible critical aim, an end. The ressaca also allows for a momentary undoing of the prescriptive associations or metaphoric analogies, giving rise to an indeterminate and propositional state/space.

A balance between overdetermination and the unforeseen underlies a large part of the production of Lucas Simões. If, on the one hand, his pieces begin with the extreme preciseness of the vectorial grid of CAD (Computer Aided Design) software, on the other, they presuppose the imprecision of their manual making, the mutation of the material over time, the unpredictability of the contact with the spectator, and other unpredictable aspects. The rigorous planning that goes into the pieces makes these expected/desired unforeseen outcomes all the more powerful. Thus, the “final work” does not represent the instant at which the artist “loses control” of the artwork in face of the contingencies of the real; rather, it denotes merely the development of the happenings that were previously calculated and authorized for the work.

In his large-scale installations, Lucas Simões gives rise to situations where the visitor’s movement through the exhibition space presupposes a reconfiguration of the work, whether by a physical “confrontation” between the viewer and the piece or by a radical shift in the perception of the work according to the observer’s specific position.  As “participation” is nearly inevitable in these works, they avoid the paternalism of an edifying “interactive” experience. In the spatiotemporal experience of Lucas Simões’ installations, the certainty of the design grid becomes a vortex, a labyrinth; it creates places marked by a subliminal and ambiguous tension, between the threatening and the playful, where the distinction between the controller and the controlled becomes blurred; it declares its danger of imminent rupture and its precarious balance; it refers to the visual vocabulary and experience we inherit from the streets and cites the tension between the idealized notions of space and the reality of its physical manifestation and everyday appropriation. By circulating through the exhibition room, the viewer contributes to the work’s permanent reconfiguration or even its “destruction,” maintaining it in a limbo between ruin and construction.

Although most of Lucas Simões’ works are possible to grasp on an architectural scale, miniaturization and giantism are inherent qualities of his sculptural pieces. Such sculptures are structured based on the intersection of two types of operation: the appropriation of objects and the exploration of determined materials that lead to the creation of new artifacts. Through carefully considered combinations and juxtapositions, Lucas creates compositions that enlarge the “vibrations” of each one of the parts, intensifying the formal limits of each element in order to allow for the emergence of other narratives that are inherent to them but which remain dormant under their “uses”. The exchangeability of scales makes the viewer “gauge” these artworks through an enlargement or miniaturization of his or her own body. The fictional possibility of walking over the topographies or of dwelling in the proto-monuments and buildings molded by Lucas Simões is contradicted by an enclosed dimension the pieces seem to contain, something to which we do not have access, whose existence we can only glimpse and suppose.

The objects featured in Ressaca combine a series of operations recurrent in the artist’s sculptural research—such as the use of light and fragile materials that impose forms on the materials to which they lend solidity, weight, and permanence, as well as the importance of gravity, of balance, and of the void—with a set of formal decisions that point to an equation never before seen in Lucas Simões’ practice. But the state of ressaca prevents an interpretative or prescriptive discourse that would “tame” these pieces since they beckon for a more obscure existence, less subservient to themes and labels. To the infeasibility of conclusions, the ressaca adds the certainty of the discourse where the careful planning becomes indeterminate due to anticipated, desired and yet unforeseen outcomes. The end, a letting go.