To inaugurate the Proyector section, an online cinema focused on video works related to the thematic framework of the current issue of the magazine, Naomi Rincón Gallardo presents her work Resiliencia Tlacuache accompanied by a conversation with the academic Laura G. Gutiérrez. 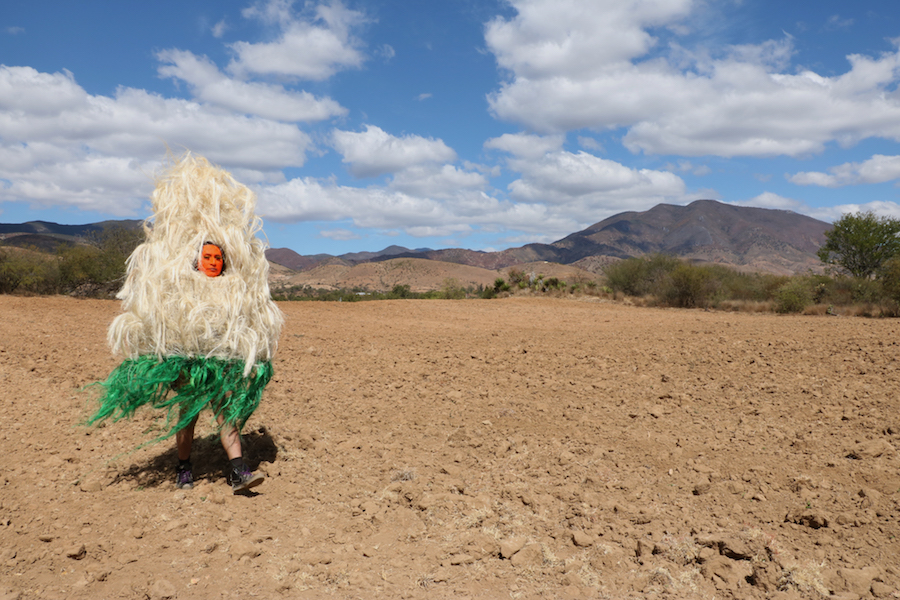 For more information about this work and other by the artist, visit her website.

Laura G. Gutiérrez: Last year, I was fortunate enough to see Resiliencia Tlacuache [Tlacuache Resilience] when it premiered at Parallel Oaxaca, and I noted its resonances with El Viaje de Formal [The Formaldehyde Trip] and Sangre Pesada [Heavy Blood]. Not only in terms of aesthetics, but also in regards to its feminist critique of the disposession and extractivism that we’ve been dragging with us since colonial times. I would love to know more about these resonances and connections between the three pieces.

Naomi Rincón Gallardo: Resiliencia Tlacuache (2019) is part of Una trilogía de cuevas [A trilogy of caves], whose other two parts are El Viaje de Formal and Sangre Pesada. Although they stand independently of each other, I call them a trilogy because they have underlying resonances and commonalities: the presence of a guiding animal (a tlacuache, an axolotl, and a hummingbird, respectively); the cave as a place of connection with the underworld and sleep’s nocturnal powers; and the feminine bodies/territories that resist and re-exist in contexts exposed to heteropatriarchal and colonial logics of destruction, pillage, and death.

We are witnessing the intensification of colonial expansion at a planetary level, where we debate on to whom the world, the air, the earth, minerals, bodies, the workforce, and even subjectivities belong to—as well as who must live and whom we must kill or let die.

Rita Laura Segato calls these violent acts and practices, that transform the living into things and property, pedagogies of cruelty. In the face of this, she proposes the historical feminine project of relationship preservation. Una trilogía de cuevas aligns itself with this project of nurturing relationships that destabilize coloniality’s symbolic hierarchies through desire and imagination.

LGG: Resiliencia Tlacuache centers on what we now call Oaxaca and on the feminine and ancestral forces that fights against these pedagogies of cruelty. During the opening of the video, I was impacted by meeting Rosalinda Dionicio, to whom you dedicate the artwork. How did this come to be?

NRG: I met lawyer and activist Rosalinda (Rosy) Dionicio through organizers and friends we had in common, and I have had the honor and fortune to cultivate an affective bond with her through our extensive conversations. She told me about her involvement in land defense mobilized by a Canadian mining company’s imposition in her hometown of San José del Progreso. After surviving an assault where she suffered leg bullet wounds, Rosy continues to catalyze and organize efforts for life and land defense in the various communities that are being affected by extractivist companies. During one of our conversations she told me that in her community, they call strong, resilient people tlacuachitos [little tlacuaches], as tlacuaches have the ability to resist any kind of attack by playing dead and thus distracting their enemy and escape harm’s way. 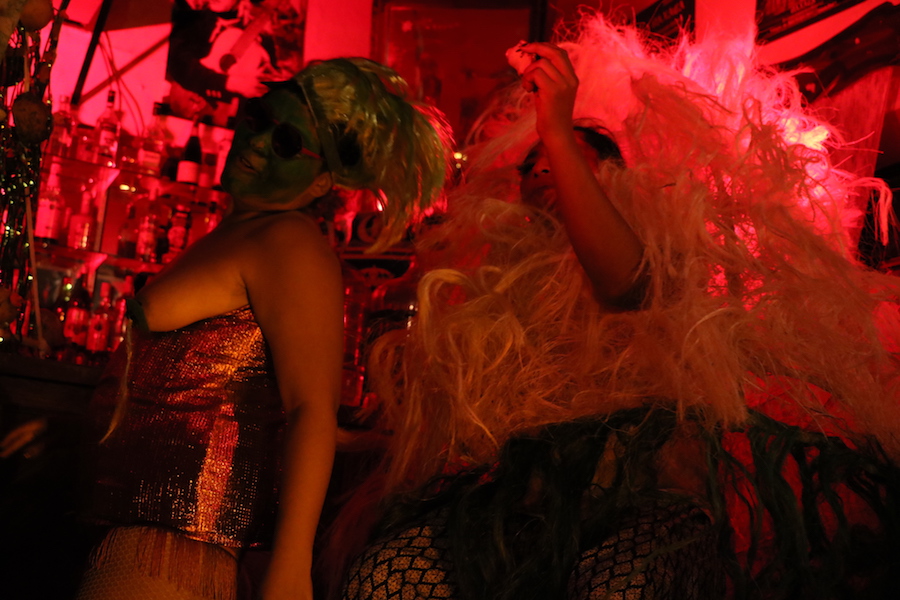 LGG: Another aspect of Resiliencia Tlacuache, and your work more broadly, is how certain critical lines of thought (such as intersectional feminism, decolonial, and queer/cuir perspectives) permeate the fabulations. It reminds me of Saidiya Hartman’s concept of critical fabulation; in your case, mytho-critical fabulations.

NRG: I am indebted to women* that have opened spaces and bridged gaps where I have been able to find inspiration, orientation, refuge, clarity, and strength. In my work I try and inter-animate epistemic intersections between the legacies of Black, decolonial, and intersectional feminisms, as well as cuir/queer critique and theory.

Of course, there are frictions between these perspectives, but I aspire to build a “Mundo Zurdo” as Gloria Anzaldúa imagined: a self-defined place of relational difference that can generate transformations through the articulation of particular affinities.

You are right; I have borrowed Saidiya Hartman’s term that refers to the work of telling impossible histories that do not reproduce the grammar of violence; or rather the work of telling counter-histories as compensations/forms of reparation. I tried to weave this narrative task with a mythical dimension, as my work is nourished by Mesoamerican epistemes that manifest in myths and legends. Mesoamerican myths are an interest of mine because they are lived testimonials of ancestral thoughts and symbolisms, that account for pluriversal worlds where human, non-human, and cosmic creatures interrelate in mutual reciprocity and interdependence.

In Resiliencia Tlacuache, I imagined, then, finding a tlacuache as a nahual, a spirit guide or protector. The tlacuache has a tremendous mythical density: they are a character that steals fire with their tail, traces the causeways of rivers, likes tepache and drinking, is cunning, a merrymaker, and a feminine force that appears in the dawn. In Mixtec codices, the tlacuache is an ally of Lady 9 Reed, whom they help cut the agave’s leaves to obtain its intoxicating salve. I decided to infuse Lady 9 Reed with the stories that Rosy told me. And of course, Agave would become an object of desire, and, like Mayahuel, a provider of pleasure and intoxicating rituals of death and resurrection. Finally, I thought of a Mound as a narrator, as in Oaxaca mounds are considered sacred spaces.

And so, these four characters—the tlacuache, Lady 9 Reed, Agave, and the Mound—find themselves in a non-linear temporality upon a landscape threatened by extractivist processes, to then conjure the nahuas, Indigenous nation who are protectors of the land, and the intoxicating powers of festivity with the goal of keeping the vital forces aflame in times of danger. 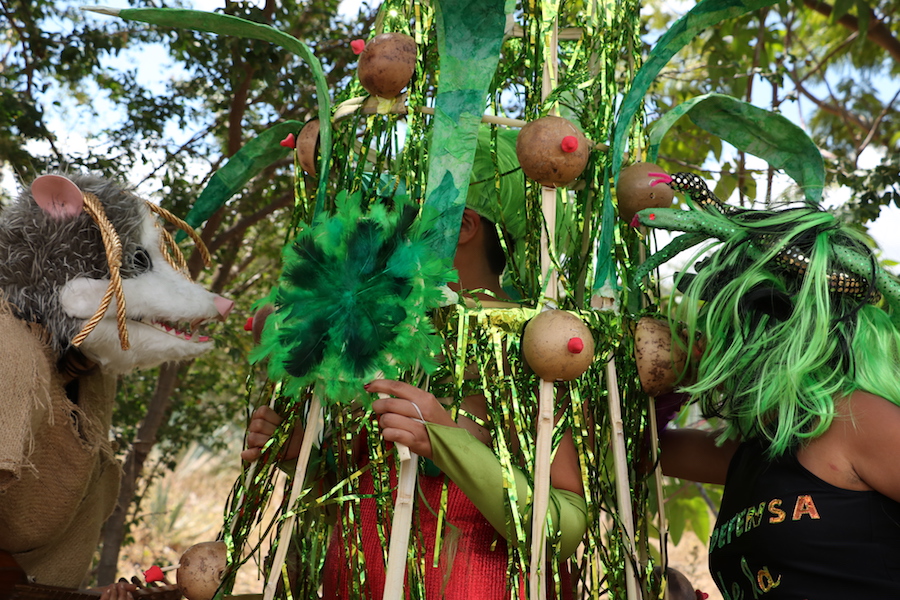 LGG: I love how you weave together peripheral or subjugated thought, as well as temporalities and geographies, to fabulate or create new myths that we lack in the present; and to imagine futures that are different and more suited for us. It makes me think of José Esteban Muñoz and the idea of queer futurity.

NRG: José Esteban Muñoz has been an important compass in my work to think of queer (or rather, cuir) horizons, and sketch out worlds opposite to the present for a future that is not yet here.

I am interested in creating conditions that foster a space for connection where differences can brush against each other, where land activism, sex and gender dissident expressions, indignation, and pleasure stoke desire’s vital pulse in the fight to build other worlds.

LGG: To speak through pleasure comes with powerful approximations to the unearthing of submerged knowledges and subjugated practices, through ancestral rituals as well as through our people’s incredibly recursive manner of art making.

NRG: Resiliencia Tlacuache is nourished by grassroots ways of knowing and practices: Rosy’s incarnate words on political organizing through assembling conversations on ritualistic healing practices with my istmeña friend and curator/healer Claudia López Terroso, compilations of myths that keep the notion of co-presence of different scales alive, life-worlds, and temporalities, forms of orality such as hip-hop and Son Jarocho verses, vernacular modes of handcrafting objects and outfits, Chichis Glam’s contributions to the temptations of cuir burlesque cabaret, and the incredibly creative mode of relationality, pleasure, intoxication, and resilience that a place like Oaxaca knows very well how to invoke and provoke.

Resiliencia Tlacuache was produced with the support of FWK/ Peek/ Dis/possession: Post-Participatory Aesthetics and the Pedagogies of Land, and Parallel Oaxaca.