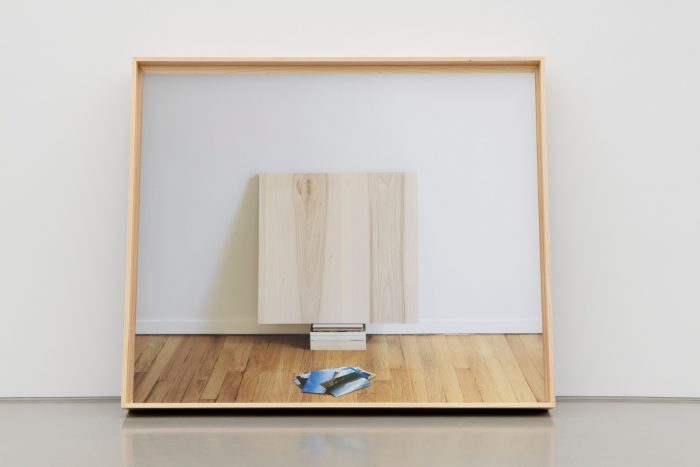 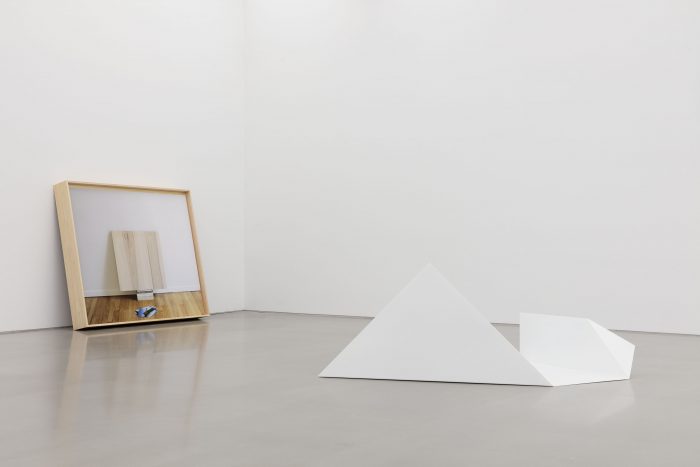 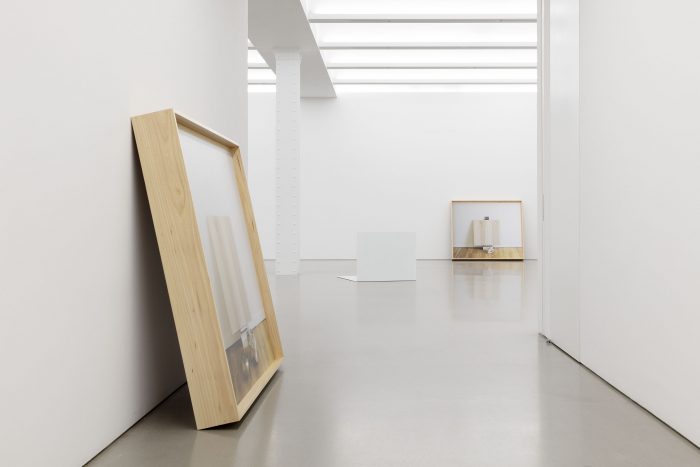 Perrotin New York presents Reading Room, a solo exhibition by New York-based artist Leslie Hewitt. For this exhibition, Hewitt introduces new bodies of work, including a series of photo-sculptures, wall interventions and steel objects, as well as a conceptual reframing of the gallery’s adjacent bookstore.

The exhibition’s title Reading Room is a nod to one of the central theses of Hewitt’s practice, which works to disrupt and complicate entrenched readings of images and art objects as fixed or static, exposing a web or at times a knot of overlapping interpretations. For more than fifteen years, Hewitt has explored the relationship between image, text and object, but also the influence of repetition, meter and perspective as an extension of photography’s aesthetic power. Hewitt composes simple shifts and rearrangements by introducing or removing media, textures or geometries within a single frame, imbuing the overall series with a cadence and unique grammar. Her application of these principals often creates an ambiguity that destabilizes engrained forms. This rupture or betweenness is where Hewitt builds an open and discursive space to collectively grapple with questions of erasure, poetry, post-memory, temporality and technology.

In 2007, Hewitt began working with the form of Vanitas (still life) while studying this particular genre of 16th and 17th century painting at the Rijksmuseum Research Library in Amsterdam. For the Reading Room exhibition, Hewitt found herself immersed in the local and global vantage points found in the work of Arturo Schomburg (1874-1938) and Lewis Michaux (1932-1976). Her exploration into their relationship with the abstract idea of diaspora, the physicality of books and the cosmopolitan spaces each built, influenced and inspired the tone of her current exhibition.

As part of her ongoing still life series, Hewitt will present a new set of photo-sculptures (photographs that rest in custom built wooden frames and lean against the wall), titled Spiral and Loop. Set in her studio and shot with a fixed camera angle in natural light conditions, each composition is punctuated by a variety of objects such as personal and found snapshots depicting everyday life, paper with abstract drawings by hand, a series of books, as well as a succession of raw materials such as wood, glass, metal, stone and shells. Her selection of books and materials are compressed within a liminal space and subjected to a chorographed geometry and the impression of her hand. Decentered and repositioned within the “democratized” space the camera produces, each work is a quiet and subtle unfolding of compositional phrases: figuratively and concretely.

Juxtaposed to the leaning photographs, Hewitt introduces a new series of five steel sculptures. Industrially fabricated, the sheets of metal have been folded at 90 degree angles at various points of the same plane. These post-minimalist objects are placed in a scattered position across the gallery floor. Hewitt’s geometric forms mirror navigation, perspective and orientation within a built environment. Similarly, two site specific installations confirm her understanding of the importance of spatial awareness. These wall-like structures, through their dimensions, respond to the doors and windows of the first floor, adapting themselves to the architecture of the space.

Reading Room continues into Perrotin’s Lower East Side bookstore by repurposing its function and introducing a platform for a series of conversations. Hewitt has positioned a curated bibliography of titles significant to her practice as well as two other interventions: a single Riffs on Real Time photograph (which portrays the interior of Harlem’s landmark “National Memorial African Bookstore”) and a text-based html programmed video, exploring the intersection of concrete poetry and what Arjun Appadurai would call a technoscape. Throughout the duration of the exhibition, Hewitt will invite friends, colleagues, and thought partners to activate the space in a series of semi-public gestures in response to the notion of a collective archiving with curator/writer Omar Berrada, DJ/collagist Ayana Contreras, historian/writer Sharifa Rhodes Pitts, cinematographer Bradford Young, and musician Tariq Trotter/Black Thought.

Leslie Hewitt has held solo exhibitions at the Sculpture Center, New York; the Power Plant, Toronto, Canada; the Minneapolis Institute of Art; The Menil Collection, Houston; Contemporary Art Museum St. Louis; and the Institute of Contemporary Art/Boston, among others. She is the recipient of numerous awards and grants, including the Berlin Prize, the Joyce Alexander Wein Artist Prize, and was a Radcliffe Fellow for Advanced Studies at Harvard University. Hewitt’s work is in numerous public collections including the Museum of Modern Art, New York; the Solomon R. Guggenheim Museum, New York; the Whitney Museum of American Art, New York; the Los Angeles County Museum of Art, Los Angeles; the San Francisco Museum of Modern Art, San Francisco; The Walker Art Center, Minneapolis; and the Museum of Contemporary Art, Chicago; among others.