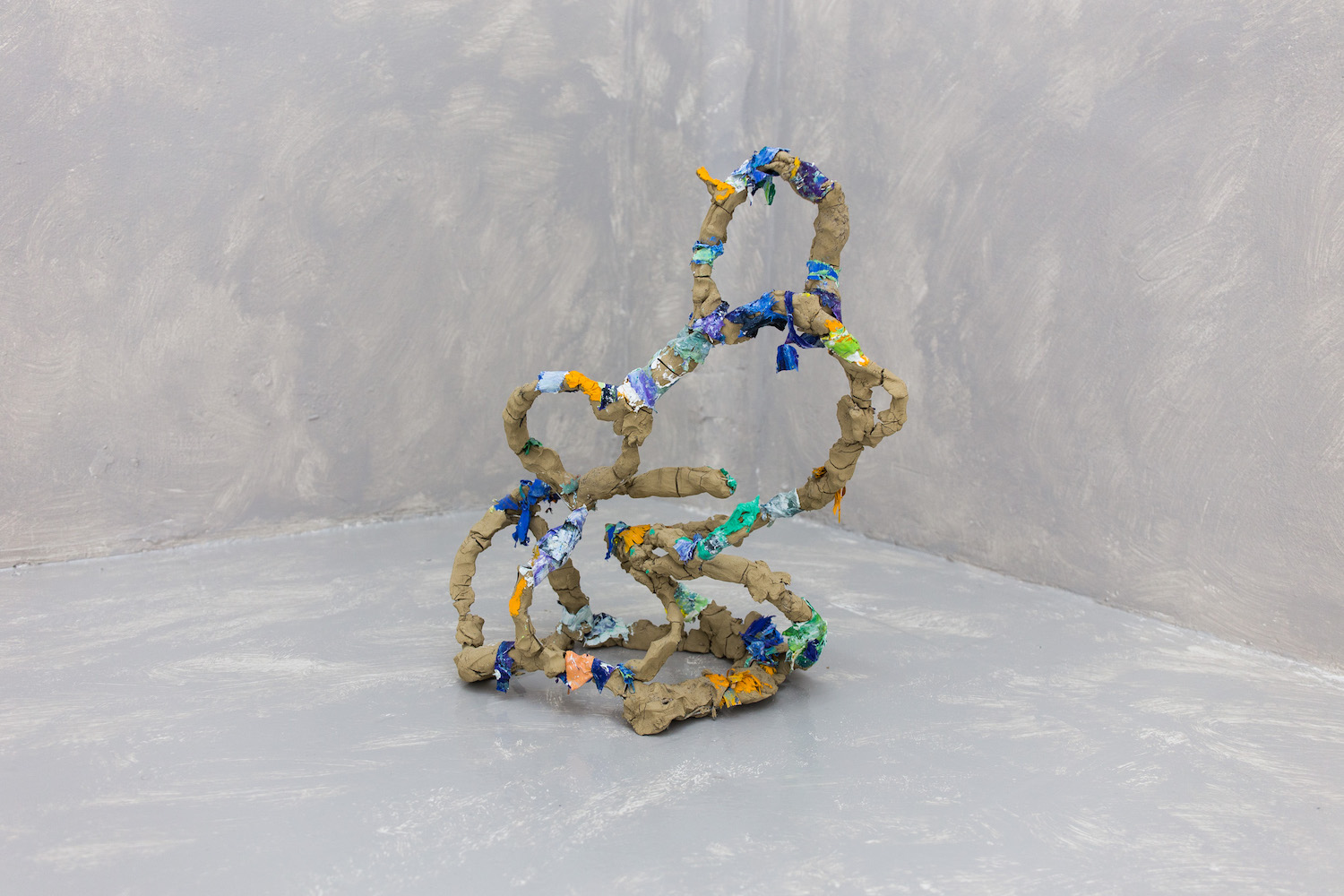 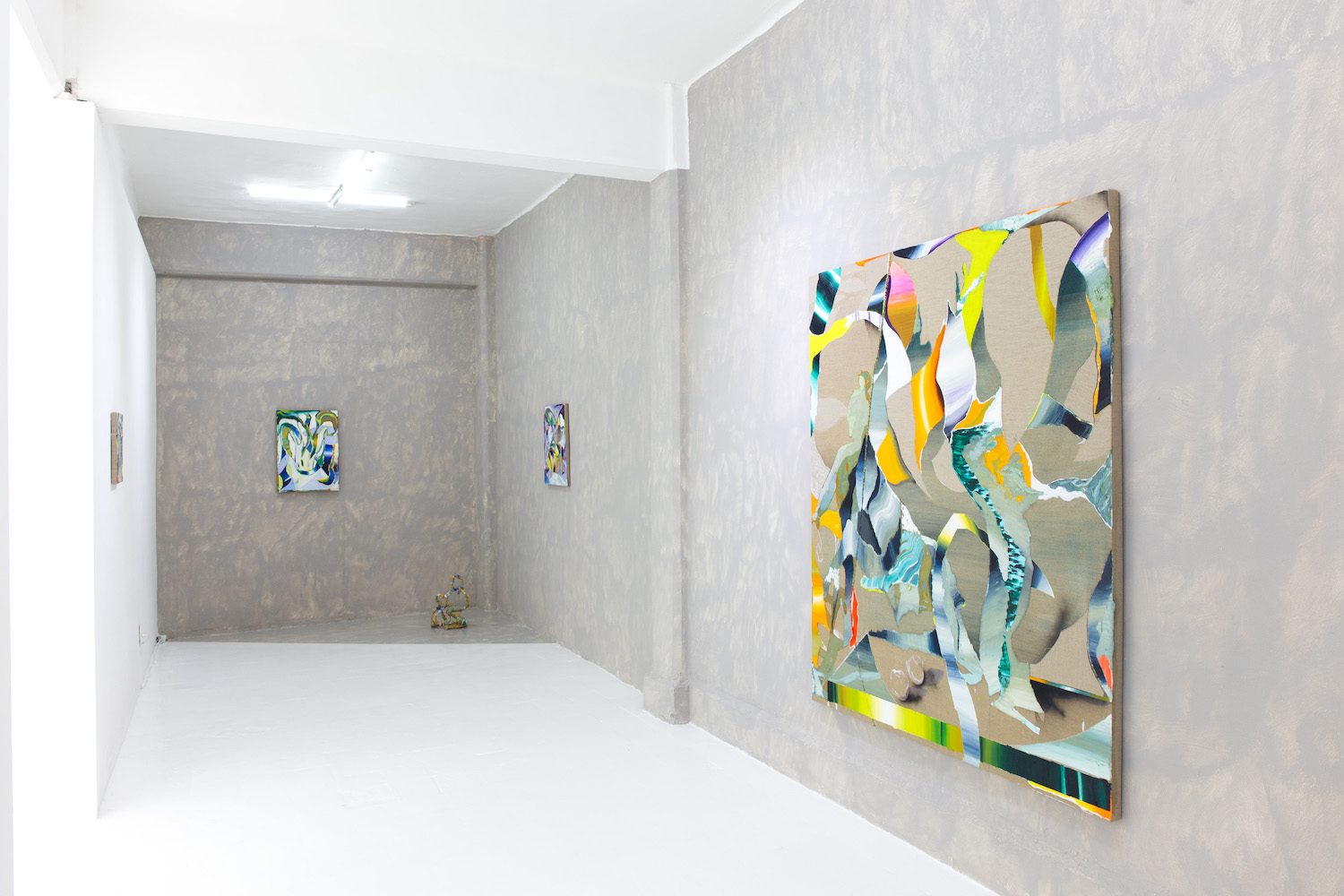 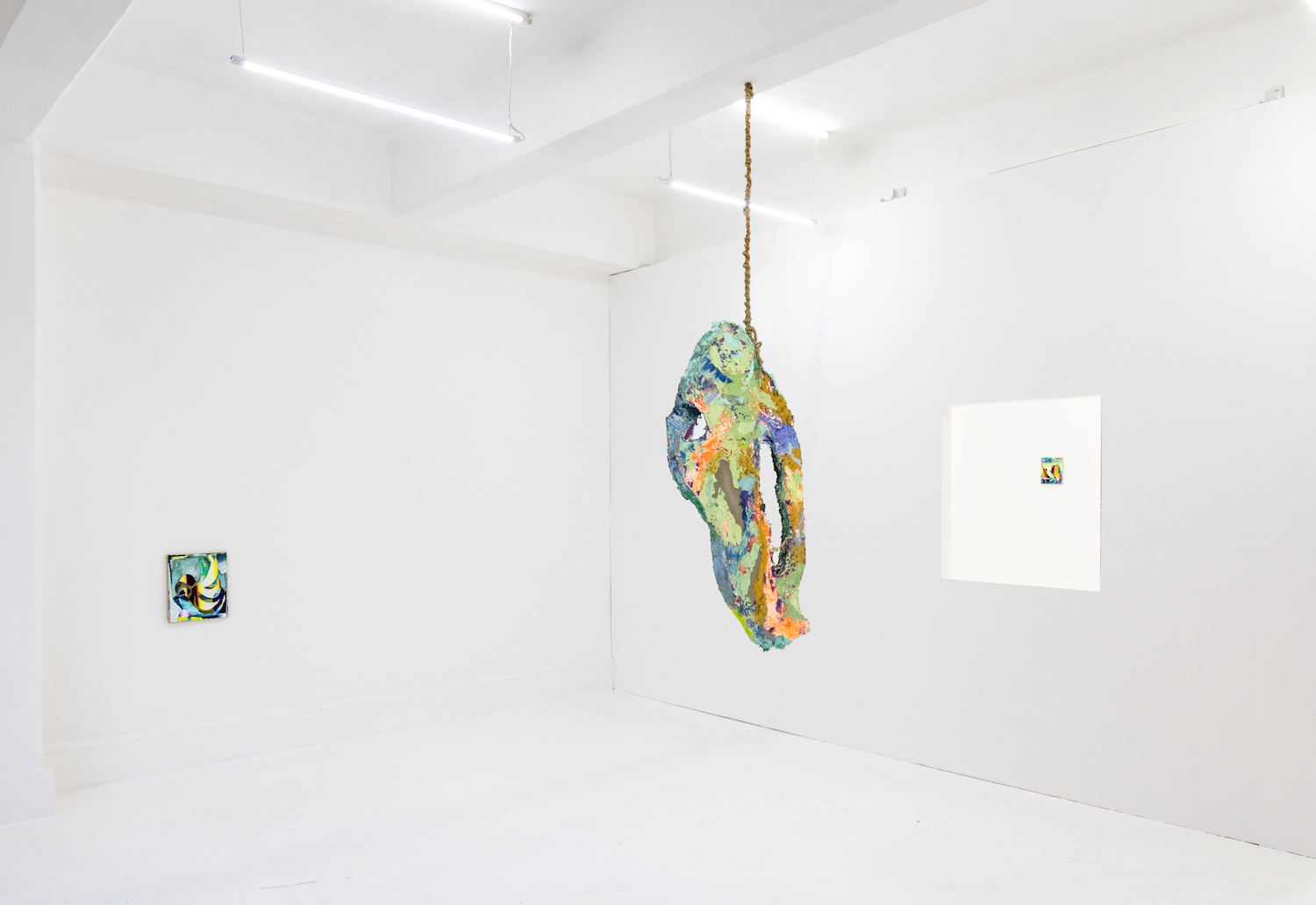 Pieles ciegas consists of a series of paintings and sculptures arranged around a large-dimension landscape, El cortejo [Courtship]1. Painted as a triptych, this work is wagered on the contradiction between visual illusions on the canvas and how one of its panels plays out in tension with the physical space of the gallery.

In this sense, Allan Villavicencio’s spatial imaginary refers to the changing state of material during an image’s construction, both visually and physically. By juxtaposing accumulation and excavation—and making use of multiple layers of paint and textiles—his works reveal the hidden, the impalpable, and the phantasmagoric side of things.

A long, thin arm of sunlight pokes one of the empty areas of the house. Oceania turns off the lamp with a moon for a bulb, picks up the fabric surrounding the fist-sized celestial body, unfolds it, twirls it up toward the see-through ceiling, lifts her arms, and closes her eyes as the fabric falls down over her as a dress. Maria, along with her outfit, changes her contact lenses’ color, brushes her curly hair, and changes gender. Now Oceania is Ocean in his tap shoes.

The long, thing arm of a person touches one of the house’s curtains.

His eyelashes are sewn together, the upper to the lower. Ocean’s singing has stunned him, and now he can’t remember where to find the scissors to open his eyelids. Mar takes one of the swords hanging from the see-through ceiling and dips it into the mist of one of the bottomless lakes, pronouncing his deep, mmm mmm mmm mmm mmmmm’s now. He takes out the sword, now miniature, opens the curtain, and says:

Ocean holds Ginger’s neck still while he cuts the knots in his eyelashes with the miniature sword. His eyelids open. There are no eyes behind them, just two black holes.

“Why are you doing your vocal exercises so early? You know it doesn’t do me any good,” Ginger says. “Sorry, love. The plants asked me to.”

Ginger turns around to see, using the dark masses in his face, the plant pots shaped like mouths, and the frond that doesn’t block the view to the yard. She picks up some leaves, wraps himself in them, brushes his straight hair into braids to become Gingerine.

“Today I’m going to make you a fruitcake,” Ocean tells her, “so you’ll have to forgive me my intrusion on your dream.”

Ocean flirtatiously approaches Gingerine with his footsteps tap clack clack clacking. The plants walk over Gingerine’s muscles, who waits, perfectly still, for Ocean’s kiss. Their tongues play together, Gingerine’s slides down to the dimple in Ocean’s chin, a fruit-flavored hole. Grape, apple, melon, banana, papaya. The leaves, as slowly as clouds, keep crawling toward the bits of galaxy that Gingerine carries like eyes.

Allan Villavicencio (Ciudad de México, México, 1987) thinks of the pictorial process as a metabolism in constant transformation. His practice considers the production of spatiality in and around paintings, in situ interventions and sculptures; building a “residual landscape”. The latter generates tension between a sense of wholeness and a fragmented nature within different plastic processes of excavation and aggregation.

Villavicencio observes how the fragments in his daily environment have the capacity to delimit and extract themselves, this contextualizes the pretext to seek the visible in unfolded perspectives as well as in the virtuality of the changing state of matter. His work highlights the desire to see through color as a visual interruption as well as a corporeal activity; configuring a phantasmagoria within a symbolic narrative of the space perception.

Fernanda Ballesteros (Hermosillo, MX, 1991) is a writer, artist, and documentary producer. She graduated with a double master, one in Creative Writing, the other in Contemporary History (Casa Lamm, MX, and Sorbonne Paris 1, FR); she has also studied Fine Arts, Philosophy and Journalism in Paris, Guadalajara, Milan, Quebec and Mexico City.

In 2020 she served as Head of Literature and Libraries at the Institute of Culture in Sonora in Mexico. She published Arigatou goza-y-más (Elefanta / ISC, 2019), awarded in the Sonora Book Contest, illustrated by Israel Urmeer. She was field producer and assistant director of the documentary The Cleaner, published in The New York Times in March 2021.

She currently resides and creates literary and artistic projects between Paris and Mexico City.