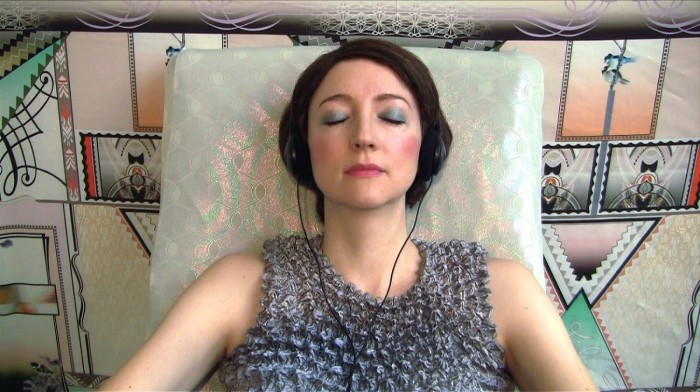 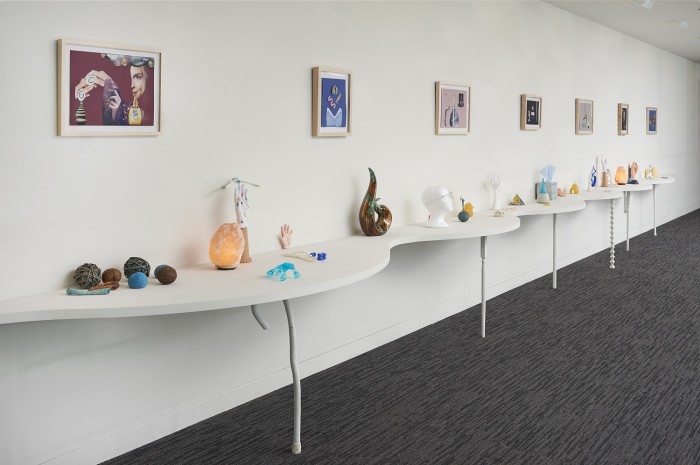 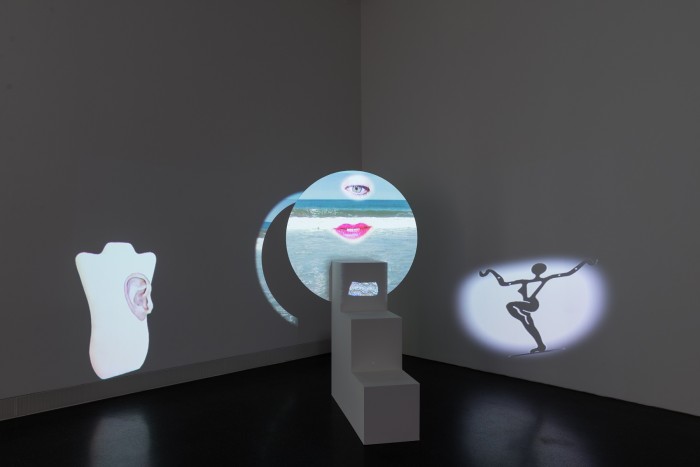 Kitsch, mysticism, pop culture and spirituality collide in the work of New York-based artist Shana Moulton. Her practice investigates the relationship between American consumer culture and the New Age movement, highlighting consumerism’s influence on wellness and spiritual fulfillment. In videos, performances and installations, the artist always plays Cynthia, a mute character inhabiting highly artificial environments, who seeks spiritual enlightenment, physical comfort, and healing through her ritualistic interaction with various mass-produced items. In search of a transcendence that ultimately eludes her, Cynthia navigates a psychedelic fantasy world tinged by longing.

In an interview with Flash Art, interviewer Marco Antonini asked Moulton how she would describe her work to a complete stranger. Moulton replied: “Narrative, short videos and performances that usually feature my alter-ego, solving puzzles of self-discovery. If it is a friend of my parents I’ll use the Blue Man Group as a point of reference; if it is another artist or a curator, I’ll mention people that have influenced me like Michael Smith, Miranda July, Eleanor Antin, Maya Deren.”

For her exhibition at YBCA, Moulton presents a multimedia installation featuring Cynthia as she experiments with a biofeedback machine to alleviate pain. The principle of biofeedback rests on the assumption that one can train the mind to control the body’s functions by monitoring and responding to internal, physical responses. The central video begins with Cynthia plugging into the MindPlace Thoughtstream Biofeedback System, a real product, to measure her body’s functions through sound and light. This is an entrée into Cynthia’s journey, punctuated by magical gloves that make objects wiggle, whispering autonomous sensory meridian response (ASMR) soundtracks to tingle the listener’s senses, and a dance routine to an Activia-brand yogurt commercial.

Objects from the video appear as sculptures and looped clips within the installation, allowing the viewer to fully inhabit Cynthia’s enchanted universe. Outside of the gallery, Moulton designed a faux doctor’s office waiting room accompanied by a series of new collages and sculptures. By following Cynthia’s unending struggle to treat both mind and body through cure-all gadgets and self-help guides, the exhibition provokes a deep reflection on the anxiety and superficiality prevalent in contemporary life.

About Control: Technology in Culture
Control: Technology in Culture is an ongoing series of exhibitions in the Upstairs Galleries showcasing work by emerging and mid-career artists who examine the social, cultural, and experiential implications of technology. The exhibitions in this series seek to prompt timely questions about the profound and far-reaching influence of technology in our daily lives by focusing on artists whose work spans a multitude of disciplines and relates to a diverse set of issues, including architecture, acoustics, psychology, labor, consumerism, the environment and the military.

The term “control” refers to philosopher Gilles Deleuze’s theory that, as a result of the everincreasing role of information technology, Michel Foucault’s “disciplinary society” of the 20th century has given way to a “control society” in the 21st century. In contrast to discipline, which molds the individual through confinement in factories, prisons and schools, control is diffuse, adaptable and ubiquitous, modulating rather than molding the individual.

About Shana Moulton
Based in New York and Münster, Germany, Shana Moulton (b. 1976, Oakhurst, California) earned a BFA from the University of California, Berkeley and an MFA from Carnegie Mellon University. She also attended the Skowhegan School of Painting and Sculpture, Maine and de Ateliers, Amsterdam.

She has held artist residencies at Smack Mellon (2012–13); the Lower Manhattan Cultural Council (2008); and Harvestworks, New York (2008), and has received grants and fellowships from Creative Capital (2013), New York Foundation for the Arts (2012), Harvestworks (2010), The Foundation for Contemporary Arts (2009), and the Experimental Television Center (2009), among others. She teaches art at the Kunstakademie Münster.

About Yerba Buena Center for the Arts
Yerba Buena Center for the Arts (YBCA), located in San Francisco’s Yerba Buena cultural district, is one of the nation’s leading multidisciplinary contemporary arts centers. With a belief that contemporary art is at the heart of community life, YBCA brings audiences and artists of all backgrounds together to express and experience creativity. The organization is known for nurturing emerging artists at the forefront of their fields and presenting works that blend art forms and explore the events and ideas of our time. As part of its commitment to the San Francisco Bay Area, YBCA supports the local arts community and reflects the region’s diversity of people and thought through its arts and public programming.

Courtesy of Phocasso/J.W. White and Yerba Buena Center for the Arts, San Francisco