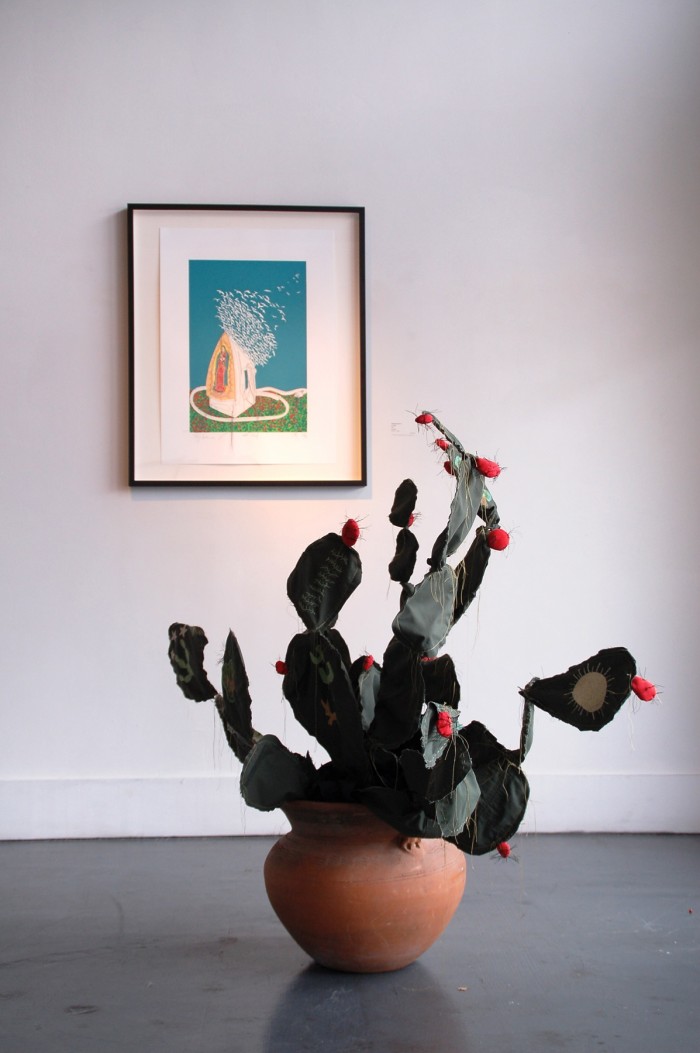 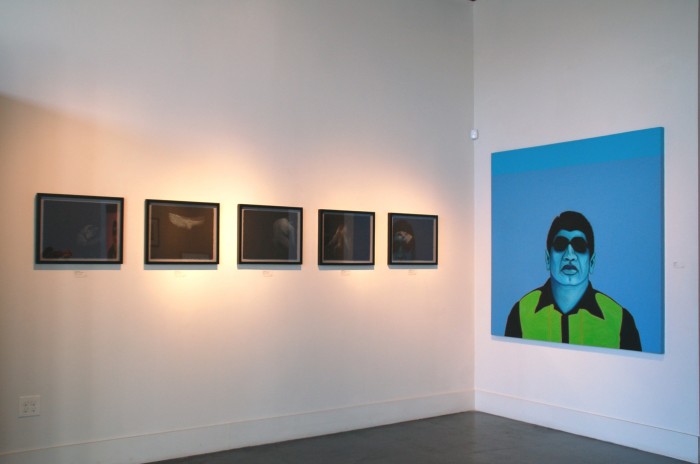 Perennial Boundaries examines the infinite thread that a manmade confine such as a geographical divide creates. The works included in this show provide the viewers with insights into the interests and concerns that have guided the creative impulses of these artists in their careers. Each artist is working in a unique and individualistic practice informed by their personal experiences from living on either side of the border. This exhibition is an eclectic mix of homage and critical discussions of living in la frontera and immigration issues.

César A. Martínez was born in the border town of Laredo, Texas and currently lives and works in San Antonio. Martínez’s signature style highlights the zoot-suited Pachuco to the Bato or Vato figures as “icons of a subculture and, above all, puts a human face and personality on individuals who are sometimes dismissed as stereotypes or, in their own time, deemed to be hoodlums by main-stream culture and even their own. Though they may seem larger than life, perhaps it is the power of art that amplifies the pachucos; the artist never intended these to be heroic or symbolic of anything other than their own humanity.”

Margarita Cabrera was born in Monterrey, Mexico yet much of her artistic practice was formulated through a border discourse from living in El Paso, Texas. Stylistically connected with the work of American Pop artist Claes Oldenburg, Cabrera’s sculptures of household appliances critique American consumer culture, as well as labor conditions abroad. Cabrera uses these simple household objects, such as the sewing machine, to reflect on the dualities these products represent on either side of the border, from the factory workers in the maquiladoras that produced them, to facilitating domestic tasks for the consumer.

Fernando Andrade was born in the border town of Ciudad Acuña, Mexico but moved with his family to San Antonio, Texas at seven years old due to the ongoing turmoil in his community brought on by the feuding drug cartels. Haunted by the news headlines and personal stories of horrific violence emerging from his hometown along with the loss of a close friend, Andrade has devoted most of his artistic career thus far to the subject of violence on the U.S. / Mexico border.

Andrade continues the thread of contrasting innocence with violence in this body of work, Estudios de un cuerpo, and is perhaps Andrade’s darkest approach to this subject matter to date. Rendered with realism and white pencil on a black fibrous paper, Andrade conveys the senseless violence that has resulted in the death and disappearance of thousands of people with isolated body parts alluding to dismemberment.

Michael Menchaca, a native to San Antonio, creates a unique video game aesthetic that employs an image-based vocabulary from Mesoamerica. Source materials for his artworks featured in Perennial Boundaries include the Mayan Popol Vuh and the Aztec Codex Borgia. Menchaca executes his themes in contemporary materials, including both prints and video installations, bridging ancient symbols with modern technology. He simultaneously infuses them with the current socio-political situations appropriated from newspaper headlines.