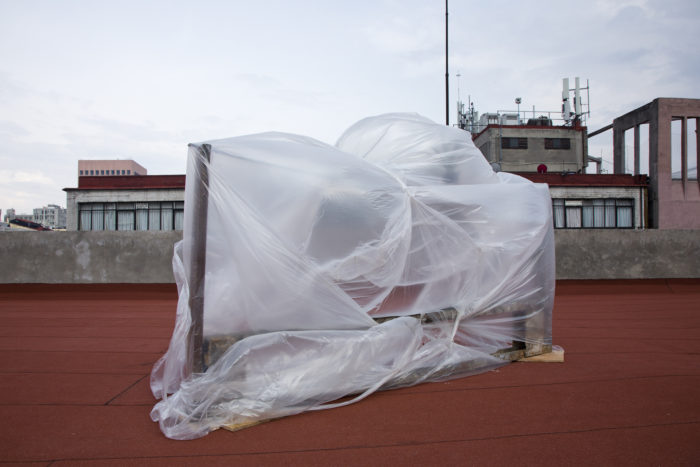 The Spaces of Zehra Arslan

The first time I saw a finished piece by Zehra Arslan at an exhibition, we had that annoying commonplace dialogue: ‘So what is this about?’, I asked. Only to be given in return, to my fatigue, the answer I wanted the least. ‘What do you make of it?’. Despite the inevitable irritation of not being given what I wanted (comfort and explanation), something of Zehra’s interpellation pointed elsewhere, away from the separating and excluding preambles many artists –and curators, collectors, critics– offer to the world on a plate. Zehra was letting the work mobilise me –any viewer– genuinely. All her pieces ask –what do you make of it, what do you?

The use of space in her pieces is poignantly twofold. One can speak of what she does to space when her pieces, that in general terms are always somewhat site specific, are conceptualised against the emptiness of walls, rooms and even squares. She takes that space in and metabolises possibilities with either paintings, sculptures, installations or none/all at once. The other space, and that which reveals the radical soul of her practice, is the very emptiness of the piece. Her work is never full, it never shouts. It always whispers. By whispering, it resists. They are never full but that does not mean they are empty. Rather, they are filled with void.

Whilst the pieces are not mirrors, not for any viewer or participant to be taken in nor reflected, they do touch on the politics of facing nothingness. What do you do to the possibility of creating an image? She asks herself. To the viewer, it is also not an abyss, not a paralysing congealing abyss so frequently seen in contemporary art; the works are not there to be decoded with any special golden key.

So, what is this special mobilisation?

The use of space in Zehra Arslan’s works allows for air to be breathed in, and by not offering a territory neither a framed program of reterritorialization –as some pieces of post-digital art by young artists may do, however critical they attempt to be –these spaces invoke the possibility of something new to be formed, something we have never seen, have never felt. The pieces, through their ‘spaces’, their gaps, their voids, their breaks, act as facilitators to a project that only the viewer can embark on, a singular journey that is instigated by the offering of this crack to the viewer that could be anyone, preferably one not too invested in reading what the art market expects one to read in a piece of art. Anyone up for leaving these pre-arranged territories… These pieces are just like love: they give you what they do not have, you give them what you do not have.

In this exchange of ‘not haves’ we together touch on impossibility.
It is what is missing that moves it, that allows for this movement to rhythmically take place. Zehra follows the rhythm of silence –just like music and poetry are made of their silences, her pieces are made of their spaces, rhythmically conferring to it the vivacity it gives us.

The elegance of Zehra Arslan –person and pieces– is conveyed in the way she deals with the notion of what is radical –it is not just about being critical of the art world, of society, of capitalism, of evil and humankind. It is not about eschewing the art market either. Her radicalism lays in the moment where the market or evil become irrelevant to the power of the work. We are having a totally different conversation.

By keeping impossibility in our pockets, we can open up possibilities for an affect we could share differently, creating this space we have not even imagined before.

P.A.P.I. (Programa de Arte Público Independiente) is an initiative that shows artists in open spaces in Mexico City. It is spontaneously organized but regular. It will change venues depending on the occasion. P.A.P.I. is programmed by Federico Cantini and Antonella Rava.