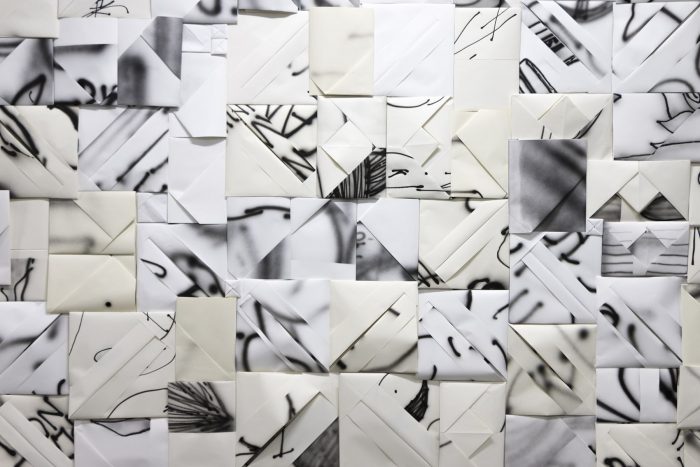 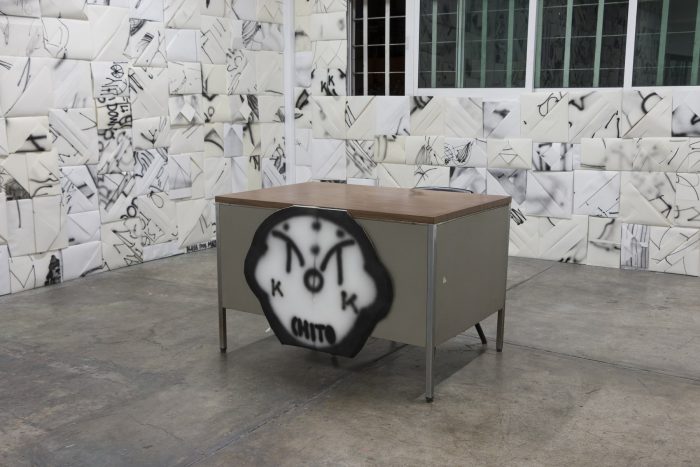 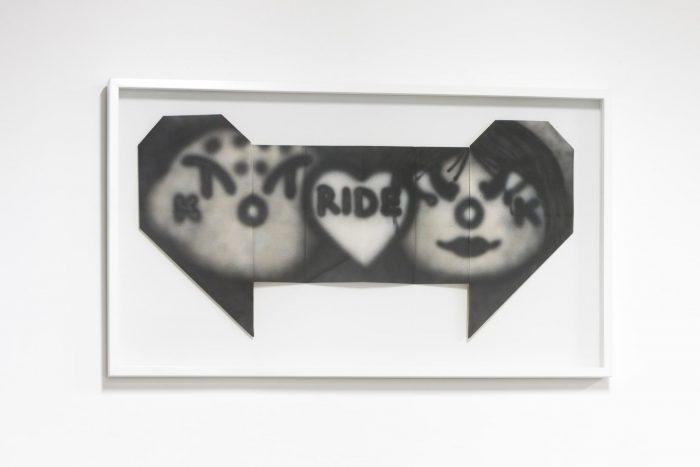 Notes To…, Chito’s first solo exhibition in Mexico, consists of an unfolding of new works on paper and sculptural pieces. The show was presented as a part of Lagos’ international invitational exhibitions program and on the occasion of Material Art Fair during Mexico City’s art week.

Chito is an American visual artist and designer from Seattle, Washington. He has developed a distinct visual language, attended by an idiosyncratic cast of characters and idioms, that has developed and expanded throughout a nomadic practice. While the artist’s best recognized medium is airbrush painting, the ground of the works has come to constitute a shifting feld to accommodate the fexibility of the painting style.

Chito’s new series elaborate the epistolary iconography of the NOTE, surreptitious communiqués used to gain or pass along private information; the note can be a method of coded communication and is a nod to youthful secrecy.

Painterly ground has evolved, ossifed, and expanded in Chito’s designs. Developing from unique airbrushed garments, single painted shirts have multiplied into harder architectures of garments fossilized in industrial resin. In a solo presentation in New York in 2019 titled kk pertain, a group of pups is united by familiarity, and their kinship spans a range of affective color. As Chito describes it, the figure of the Yung Pup “embodies the lil homie who’s still learning. Da yung homie who is wit da shiK.K but needs a lil bit of game to prosper. Learns fast and plays his position.” In kk pertain, the familiarity in painted portraits of a seemingly uniform canine face gain individual affective character through a spectrum of auratic color. Distance “Marble” Pup and Distance “Ghost” Pup are close formal siblings, but only vary in the mood that their respective textures evoke. In light of a larger pup painting at the far end of the exhibition, which widens out to include a rosary-like ornamentation above the figure’s head, the raised eyes of the host of smaller pups take on the reliquary quality of a family of icons.

Much of Chito’s painterly technique has evolved from an initial practice of airbrush painting pre-existing garments while moving about the world. Just as the fat surfaces of tshirts, when folded and stacked obsessively, transformed into the blue and white monolithic sculpture of kk pertain, individually painted notes proliferate in Notes To… to the degree that they come to form a massive, immersive environment. Viewers enter this zone of secrecy through sculptural gates (which themselves are constructed in security-grade metal from designs of folded and cut paper), lending the environment the feel of a vault. Importantly, these notes offer only the content that is immediately visually available, which is their exterior formal constitution. The notes cannot be unfolded, cannot be accessed fully, and form a textural whole, with only glimpses of messages and ghostly composite images available for consumption. In this sense, the gates act similarly to all of the notes that they guard—both invite a select, knowing audience, symbolically signalled to, as in the title of another painting, “For your eyes only.”

Another form of paper sculpture, the fortune teller, may proffer ominous predictions of the future, or may hold no intelligible information. One of the two fortune tellers acts as a blank slate, welcoming a world of potential, as the other cryptically bids the viewer goodbye in saying “C U when I C U…” The fortune teller is both a means to forge possibile destinies, but after its folding it retains the mysteriousness of chance.

This exhibition constitutes Chito’s frst solo presentation in Mexico, and features works produced in collaboration with ironworkers in the State of Mexico, specializing in welding and in the production of the ubiquitous security gates found throughout the city, an architectural form of security that mirrors the function of enclosure in the folds of a note that one school student might pass to another. As a project coordinated in tandem with the Lagos residency schedule, Chito and the gallery emphasized production entirely within the State of Mexico.

Chito’s notes exhibition will be the last of an international invitational program that sought to foster exchange in alternating local artists with international projects. This show was organized by Chris Scott and co-curated by Antonella Rava and Bergen Hendrickson.