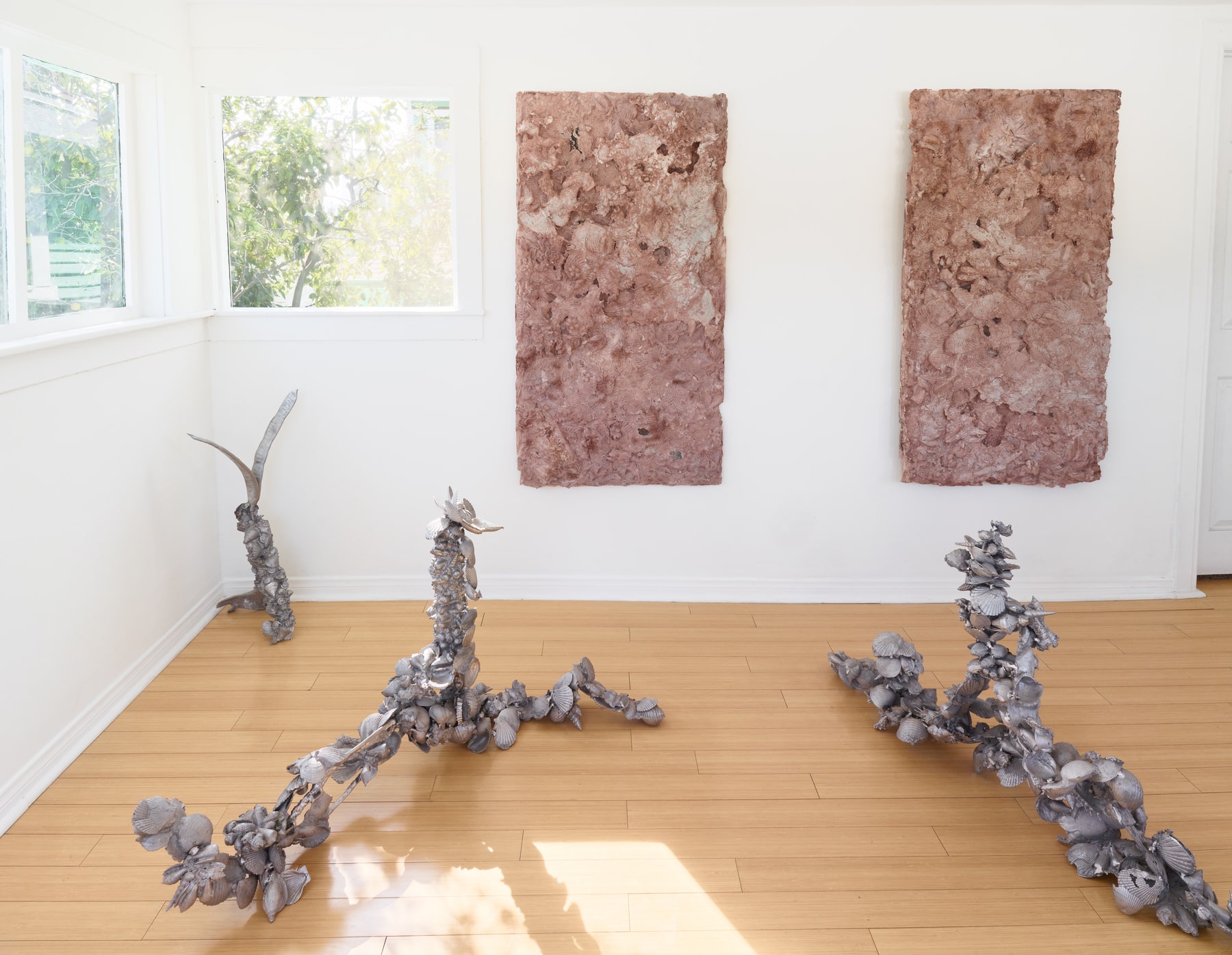 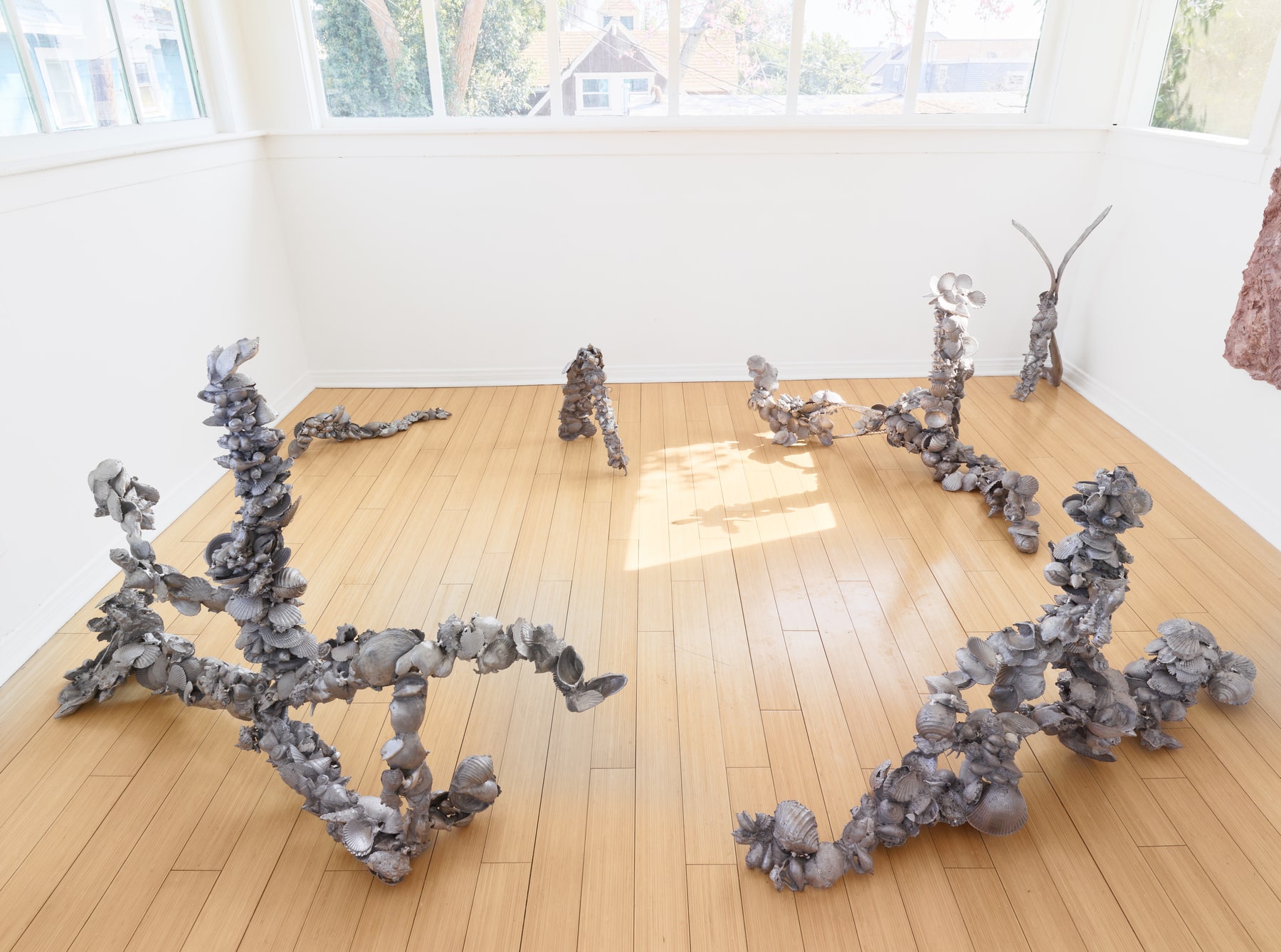 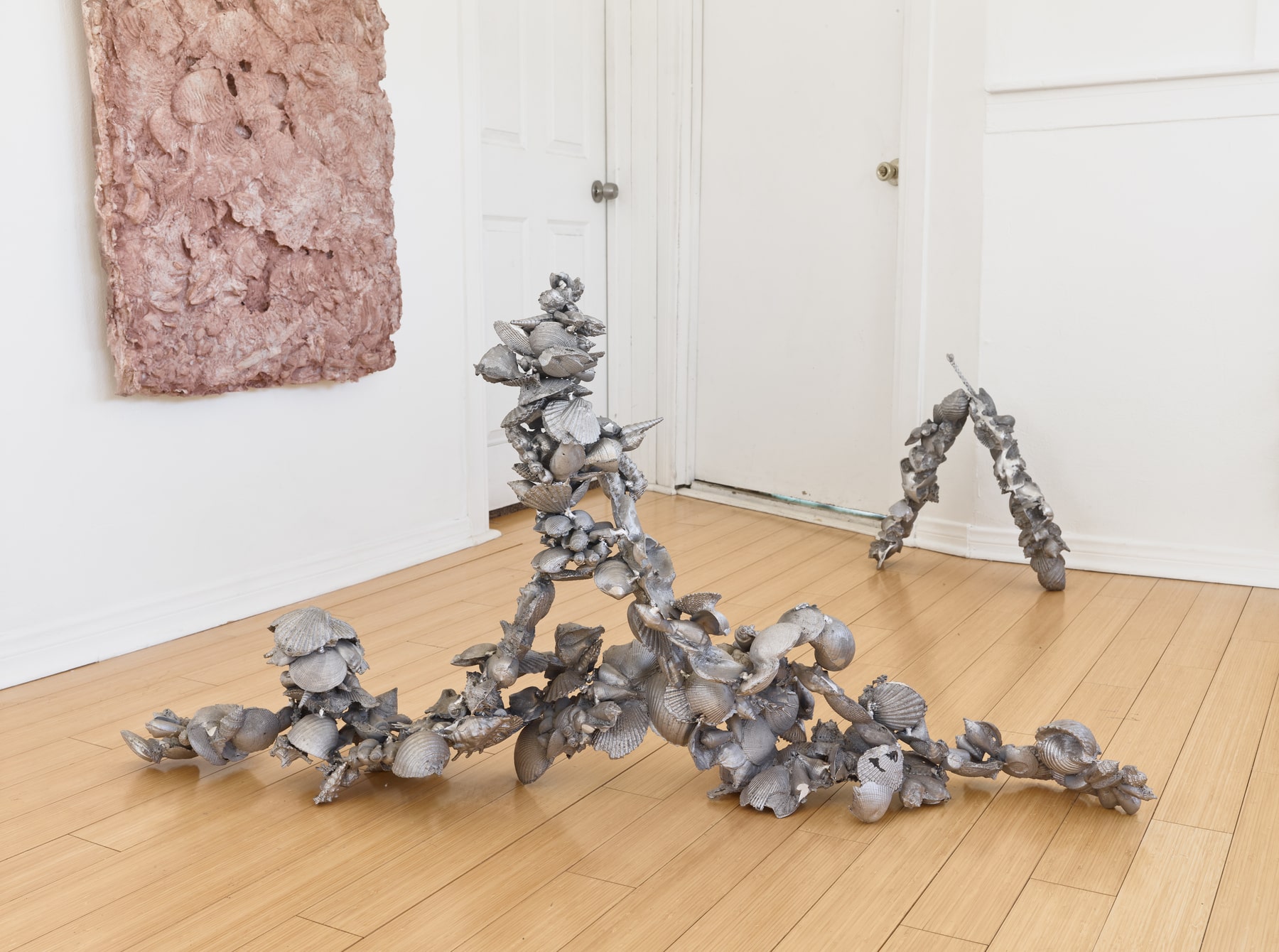 Garden presents Mud, an exhibition of new work by Los Angeles-based artist Sarah McMenimen. In these sculptures and reliefs, McMenimen forges accretions and erosions of sand, stone, dirt, and resin, or reused post-industrial alloy metals. Formed with the indices of non-human matter and traces, including shells, plants, and animal prints, McMenimen here explores the rich variance of the Earth at its boundaries—where land and sea, human and animal, ephemeral and perpetual, and living and non-living communicate, collaborate, and collide. In Mud, McMenimen builds a landscape populated with multi-species complexities that refute the anthropocentric. Within these works, things become interconnected geological strata, a non-verbal history in which all beings and objects are made medium.

Entering the gallery, the works in Mud surround and encrust the space. Accumulations emerge into two distinct but kindred bodies of work: silicate and resin reliefs and aluminum sculptures. Made from reused and melted aluminum, the most prevalent metal in the earth’s crust and in human-made trash, each unique floor work is a welded-together assemblage of cast sea shells. Like lava flowing and hardening into the ocean, these sculptures embody the transformations that occur when elements touch. Each group of layered castings branch and sprawl, at times appearing weighty, coarse, and substantial while also spindly, tenuous, and delicate. These forms were not born of a glassy, inactive sea but rather at the intersection of wildfire, kinetic geology, organic creatures, and riotous waves. The works shift borders in material and form—they themselves are the strange bodies, ecologies, and places generated when the human and non-human intermesh.

On the walls in the gallery hang rectangular reliefs of varying sizes. These works too reveal themselves to be composed of laminated casts, but this time of footprints left behind by various human and non-human animals. Inspired by her own hiking, dog-walking, and animal tracking practices, McMenimen fashioned molds from both impressions of her own shod feet in the studio, along with tracks of canines, deer, bobcats, and so on, pulled from the outside world. Constructed with sand and dirt from assorted local sites sealed in resin, the overlapping traces create entangled, non-hierarchical archives detailing the comings and goings of beings through time and space. Here, the animal print is itself an intermediary communication technology between and among humans and non-humans. These environmental substrates demonstrate that interspecies sociality is intertwined, cultural, and textual.

The environment that McMenimen has shaped in Mud reflects the concept of the ecotone, a term that defines the transitional area between two distinct biomes, ecosystems, or communities. By understanding the works as emerging from or constituting an ecotone, McMenimen uncovers a world in which nature and culture blend and merge while beings and places become together. Lifeforms aggregate, commune, and conjoin, while leaving traces, scars and signs. Matter is formed and reformed again— bodies and their indices become homes for other bodies. Minerals extracted from rock and sunlight feed before decomposing, releasing heat, and becoming mineral once again. All things, then, are revealed to be in constant flux—every place an ecotone, a site of transformation, negotiation, symbiosis, and opportunity.

Sarah McMenimen (b.1984 in Honolulu, HI) is an artist and canine behaviorist that lives and works in Los Angeles, CA. In 2014 she received her MFA in New Genres from the University of California, Los Angeles, and in 2008 her BFA from California College of the Arts, in Oakland, CA. In 2010 she was a participant at Skowhegan School of Painting and Sculpture.