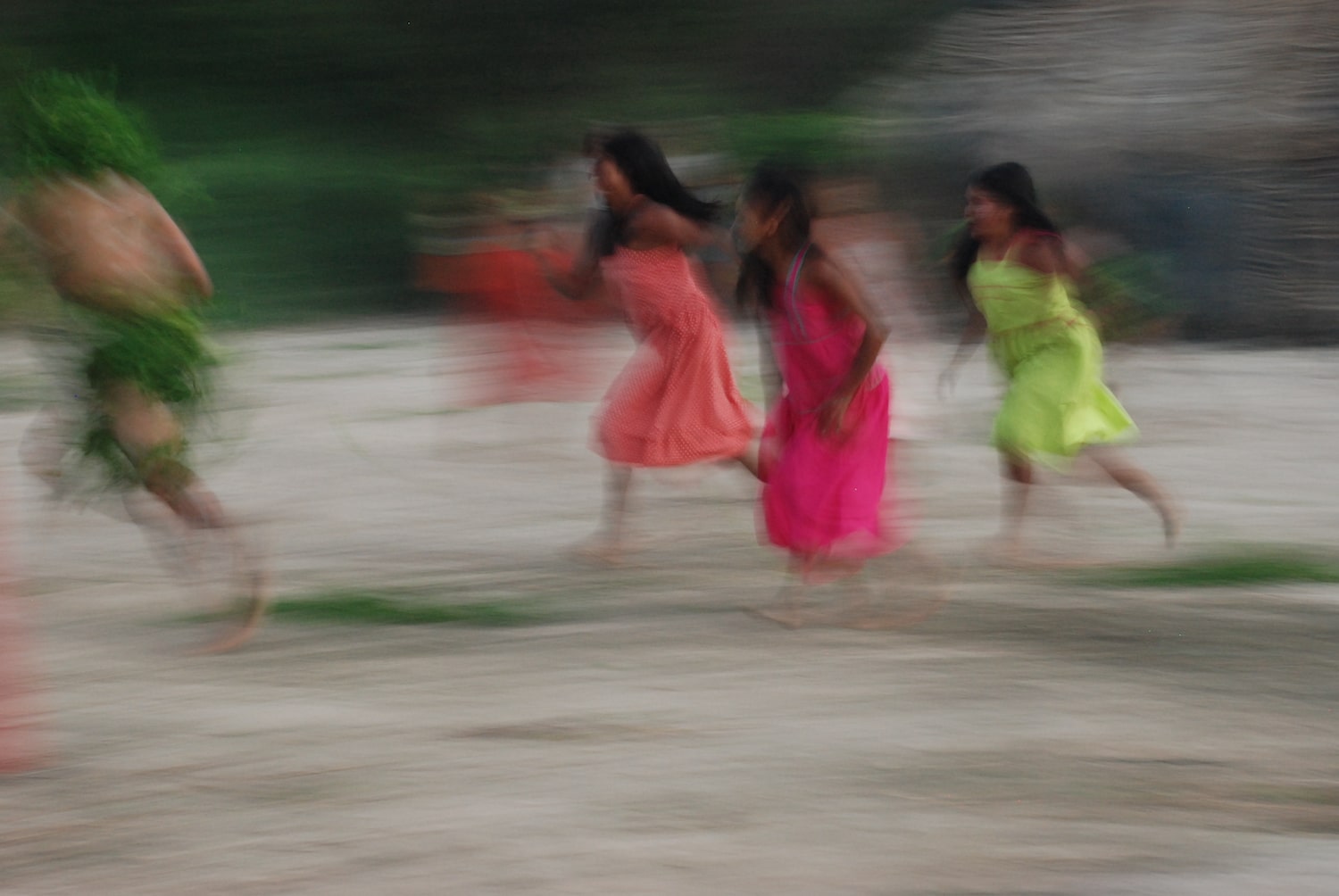 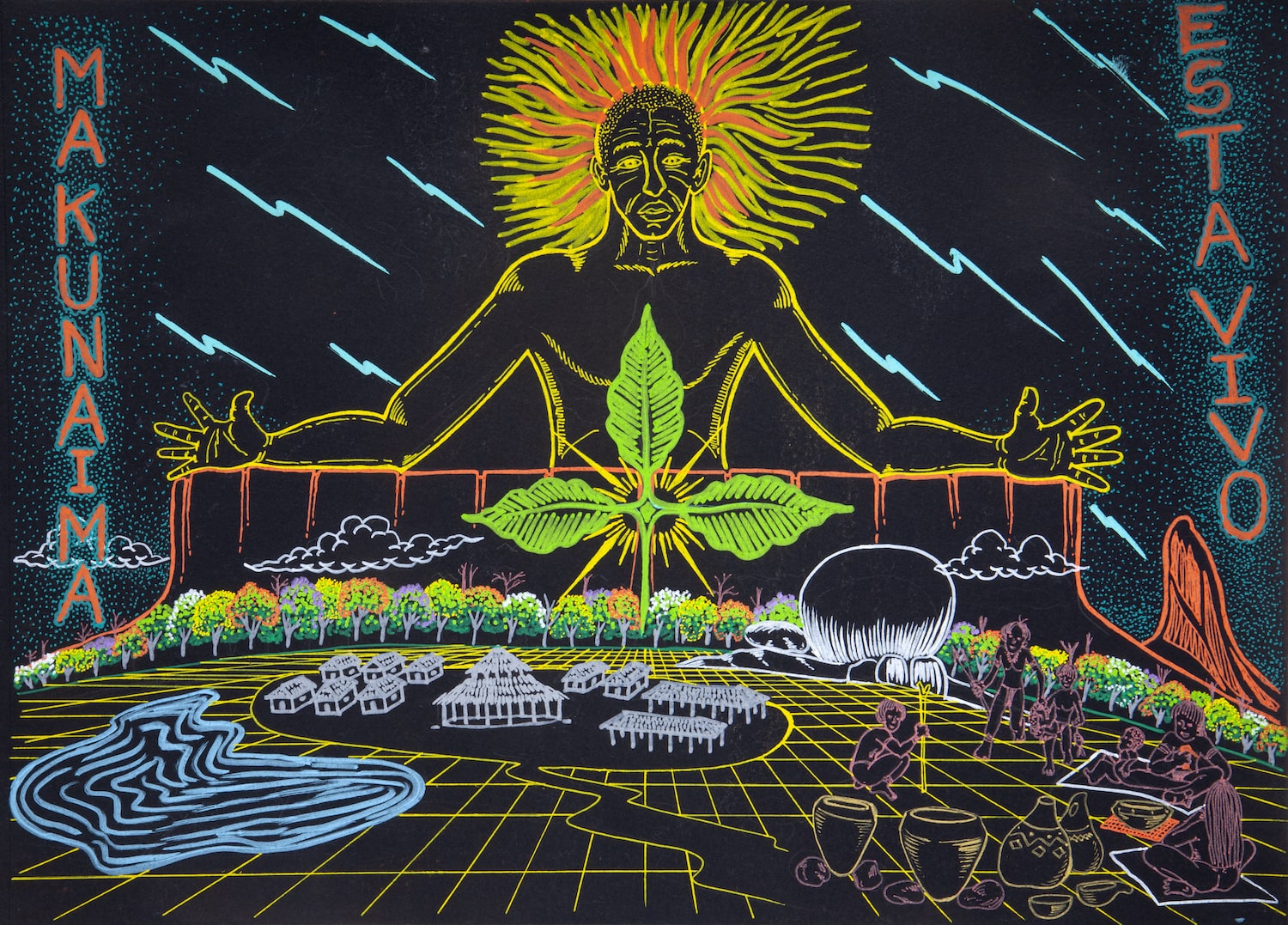 Starting September 4, the Museu de Arte Moderna de São Paulo holds the exhibition Moquém_Surarî: arte indígena contemporânea [Moquém_Surarî: contemporary indigenous art], a group show curated by Jaider Esbell, from the Macuxi nation, who is also a guest artist at the 34th Biennial. A joint undertaking by MAM and Fundação Bienal de São Paulo, the exhibition is part of the network of partnerships of the 34th Biennial. The anthropologist and cultural programmer Paula Berbert provides curatorial assistance, and Pedro Cesarino, professor at the anthropology department at FFLCH/USP, offers consultancy. The project is supported by the open call project Edital ProAC Expresso 09/2020.

Moquém refers to the technology used for thousands of years by indigenous peoples to conserve food after a group hunting, and to make it easier to transport the products around the villages. The title of the show — Moquém_Surarî — also refers to the makuxi story on the transformation of Moquém into a woman who, in ancient times, ascended to heaven in search of her master, who had abandoned her. Once in the sky, Surarî transforms into the constellation that brings the rain, marking the end of the world and the beginning of a new one. The Moquém technology is thus used to reflect on the exchange and transformation of knowledge that crosses different times and spaces—transits that make up the movements of contemporary indigenous art.

One of the main intentions of the curators is to show the audiences that there exists different art histories, and we should try not to put indigenous art into a canonical narrative. “We want to reproduce the shattering in the history of art and convey how this type of time-based relationship is chronically denied in Brazil, indigenous intellectuals were overlooked in Brazil, whether in art or in thought,” says Jaider Esbell.

Moquém_Surarî showcases works by 34 indigenous artists from such nations as the Baniwa, Guarani Mbya, Huni Kuin, Krenak, Karipuna, Lakota, Makuxi, Marubo, Pataxó, Patamona, Taurepang, Tapirapé, Tikmũ’ũn_Maxakali, Tukano, Wapichana, Xakriabá, Xirixana and Yanomami. According to Esbell, these are works that embody transformations, visual translations of cosmovisions and narratives of the artists’ bodies, bringing to the present time the temporal depth that underlies their practices. “The works attest that the time of contemporary indigenous art is not a hostage to the past. Ancestry is mobilized in the now, reconfiguring discursive stances and power relations in order to produce new forms of encounters between worlds no longer based on colonial extractivisms,” reflects Cesarino.

Audiences will come across works produced in different media, from drawings created by artists such as Ailton Krenak, an iconic indigenous leader, writer, and philosopher, Joseca Yanomami, Rivaldo Tapirapé and Yaka Huni Kuin; weavings by Bernaldina José Pedro; sculptures by Dalzira Xakriabá and Nei Xakriabá; photographs by Sueli Maxakali and Arissana Pataxó; a video by Denilson Baniwa; prints by Gustavo Caboco; paintings by Carmézia Emiliano, Diogo Lima and Jaider Esbell; among others.

The selection of artists is widely diverse, bringing together representatives from Roraima who reflect on the political and territorial effects of the invasions by cattle farmers in the region, added to other contemporary indigenous artists known to the Western visual arts scene, as well as artists who have no relationship with the contemporary art market, masters of shamanic practices, known as pajés. “These are works that show what the indigenous visual regimes are about, of thousand-year-old existences, and of which contemporary indigenous art is a recipient,” explains Berbert.

For Cauê Alves, chief curator at MAM, “the existence of this exhibition at the Museu de Arte Moderna de São Paulo’s programming evinces an institutional stance that deconstructs colonial assumptions. Moquém_Surarî opens a direct conversation with indigenous artists that allows MAM to rethink and expand its policy regarding collection acquisitions, including ethnic groups that have been underrepresented or neglected throughout history.” And he adds, “the narratives of Makunaimî’s descendants, told by themselves, certainly open new perspectives beyond those imagined by the modernist artists and intellectuals, who were vital to the foundation of MAM.”

“The Moquém_Surarî exhibition not only broadens the visibility of contemporary indigenous art, but also points to MAM’s interest in valuing the culture of ancestral peoples whose existence has been threatened over the last 500 years,” notes Elizabeth Machado, chair of the museum.

Born in the region that is today demarcated as the Raposa Serra do Sol Indigenous Territory, Jaider Esbell is among the leading figures of the movement that is seeking to consolidate contemporary indigenous art in Brazil. He works in multiple fronts and in an interdisciplinary way—as artist, curator, writer, educator, activist, and cultural promoter and catalyst.