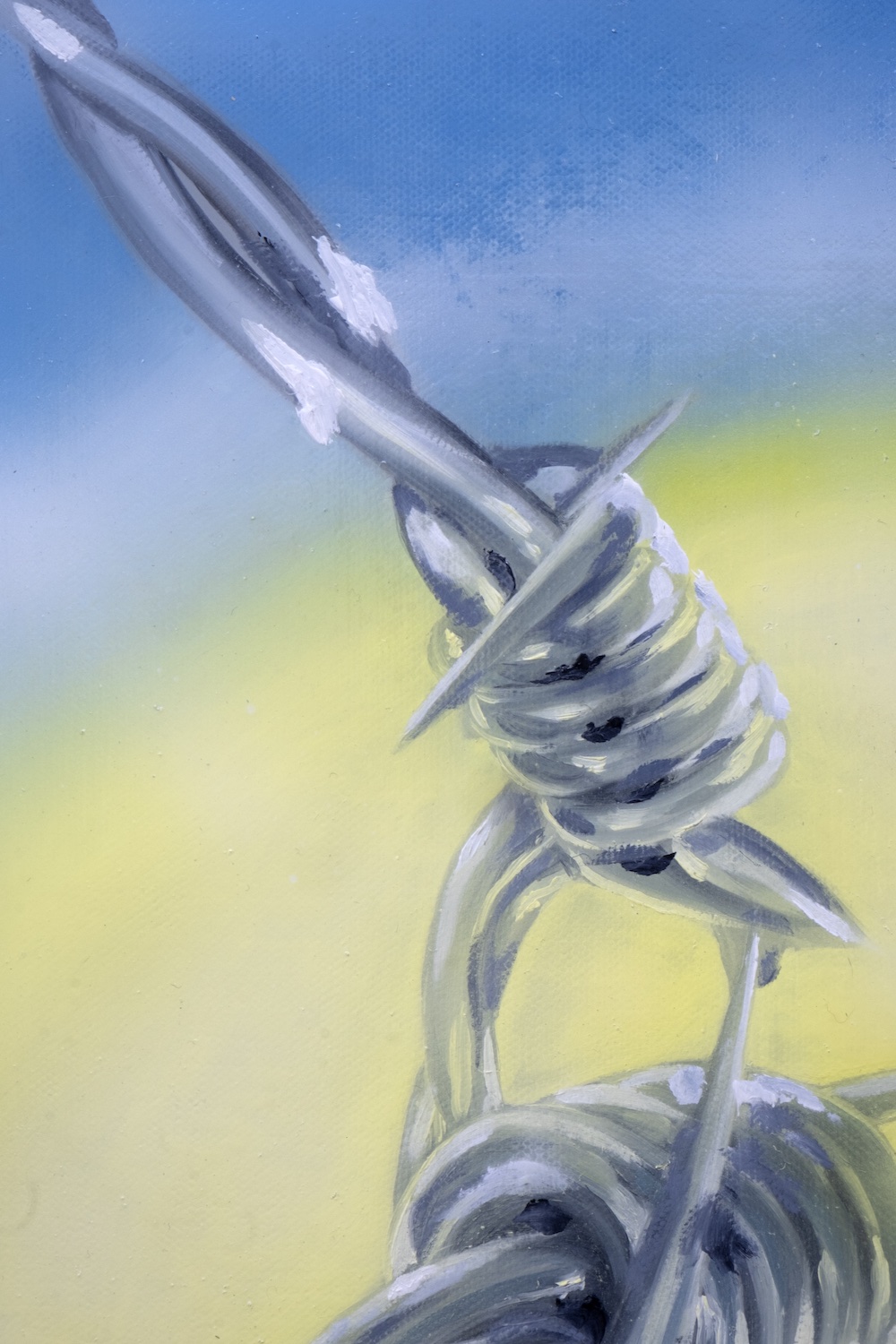 Jose Eduardo Barajas is invested in the material and economic experimentation that arises in the artist’s constant work in the workshop, the worker in the factory, the mechanic in the garage, the alchemist in the observatory, and the web-surfer when online. Learning craft under these many guises, Jose Eduardo has created these pieces throughout the second quarantine in Mexico. This body of work stands at a crossroads between post-pandemic introspection and the hangover of digital frenzy. This context propelled the work to sketch a diagnosis of our historical obsession with flat luminous surfaces.

By drawing from the thought experiment of building manufacture processes in different workspaces, Jose Eduardo can rethink our relationship to light. Conducting a careful study of reflective metallic surfaces—like barbed wires, coins, metal chains—Jose Eduardo drafts a laboratory of brilliance that creates a short-circuit between the 2D fictional glow of his paintings and the 3D hyper-realistic gleams over crystal-like waters in his video. Referring to David Alfaro Siqueiros’ use of automobile lacquer, pyroxylin, Jose Eduardo can capture light in his canvases and play with an unrealistic every-shining beam of light bathes his oil-paint representations of metal.

A series of simulations using Blender, an open-source 3D computer graphics software for creating 3D interactive visual effects, allow the artist to simulate the impact of gravity on bodies, materials and spaces. The material results of this exploration are both presented in the form of a video and diverse oil and pyroxylin paintings in the exhibition. However, its most significant consequences were directly linked to laying out the spiritual urgency for an approximation to religious imagery through exchanges with alchemical fluid. Jose Eduardo’s studies of light become transfixed in the stained glass works which form part of Mecánica Celeste. Exhibited in Guadalajara, the images of seafoam and doves echo the symbols of catholic imagery in churches in the area that display rose windows.

Through stained glass lenses, the sharp-like images of barbed wire and steel wall spikes become a tender soft-like blur of pearlescent gloss. Jose Eduardo’s investigation of craft processes and workplaces has allowed him to establish a relationship between the digital image and traditional painting through the movement of light. And we are left behind with a series of moving images which insists both in a secularised experience of bling-bling economy and a religious affair with luminescence. As we come down from a trip induced in digital triumphalism, Mecánica Celeste offers escape routes to our computerised tedium. It does so by allowing a parenthesis for internal gaze and making sense of our drifts between digital emerging technologies and traditional craft systems of production through understanding our existence as an integral component of a more complex system of movement of celestial bodies.