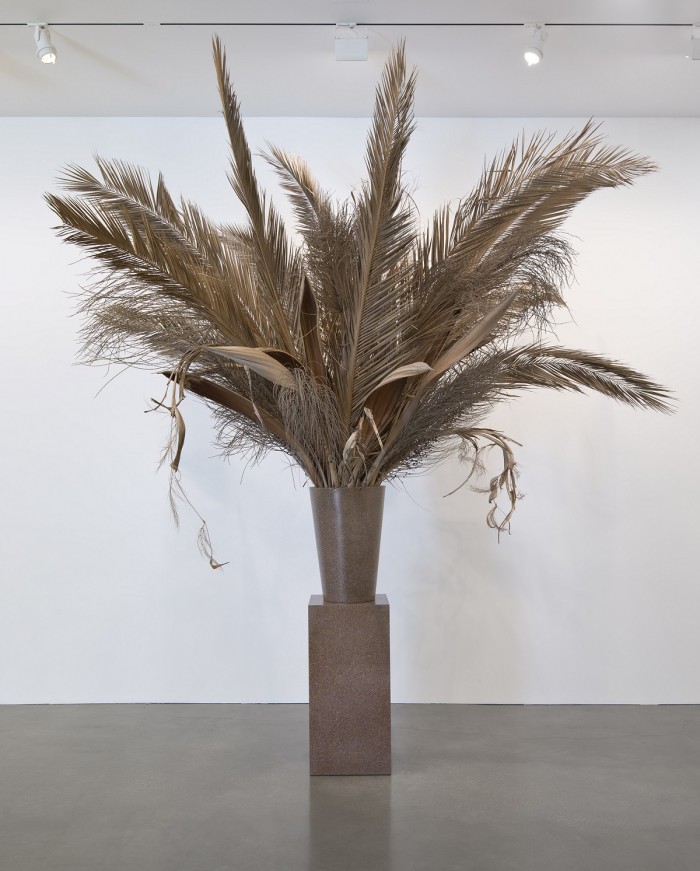 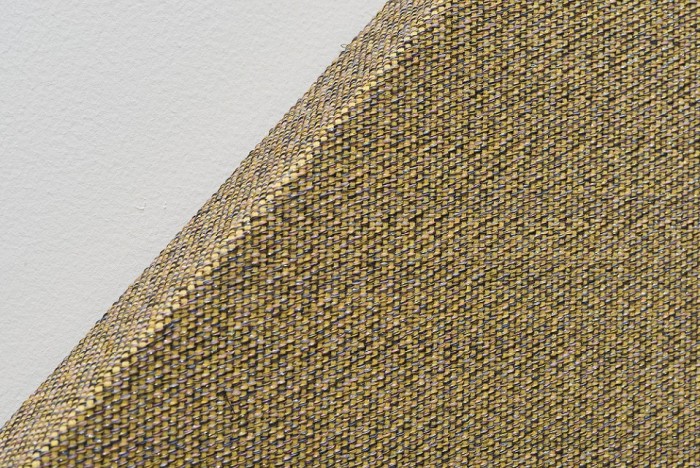 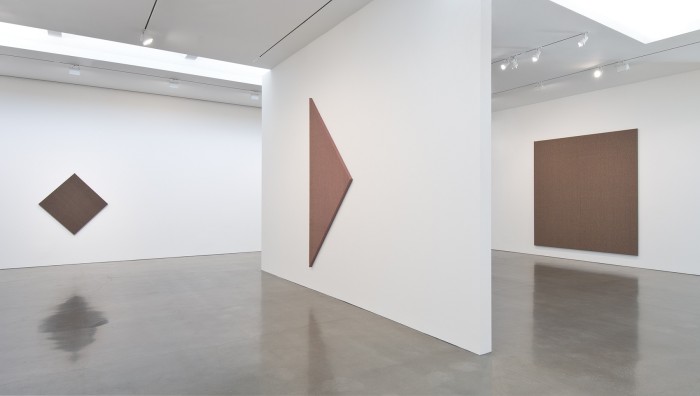 Regen Projects is pleased to present Legal Noses, an exhibition by the Dutch, Berlin-based artist Willem de Rooij. Known for working in a variety of different media, including film, installation, sculpture, weaving, and exhibition making, de Rooij has developed a stringently precise practice, which addresses some of the most fundamental components of art making, such as meaning, color, authorship, labor, and time. Yet for all its conceptual rigor, apparent elegance and selfreferential concision, his work is full of play, encouraging and ultimately engaging issues of interpretation, from the political to the social as well as the aesthetic (the title of the show, for instance, like many of the artist’s shows, is an anagram). Functioning predominantly through protocol, de Rooij’s work is often developed in collaboration with artisanal specialists– in the case of this exhibition, finishers, weavers and a florist– making it such that aesthetic decision-making is depersonalized and outsourced to a co-producer. He essentially liquidates the so-called personal touch of the artist, making every effort he can to distribute not only the production, but also, and even more importantly meaning as broadly as possible. And while virtually every aspect of de Rooij’s production is conceptually and pragmatically accounted for, nothing, paradoxically, is closed or shut down – everything is left wide open.

For his third solo show at the gallery the artist presents a kind of symbolic retrospective, unifying the essential stakes of his practice while deploying the full extent of the palette he has used until now. Inspired by art’s ostensible similarity to puzzle-solving (as if “understanding” art were like cracking a puzzle), the exhibition builds on de Rooij’s on-going preoccupation with meaning and the drive and methods to attain it. It is for this reason that the dominant figure of the show is the Tangram. Reputed to have been invented in China during the Song Dynasty, this puzzle was imported to and popularized in Europe in the beginning of the 19th century and later in the United States. Initially a square consisting of seven geometric figures, it can be reconfigured to solve over 6,500 problems, as such, like art, it is a problem (or even better, problems) vastly devoid of a single, fixed solution. The tangram is represented on seven shaped stretchers featuring individual weavings, themselves woven from the seven colors that have thus far constituted de Rooij’s palette: Pink, brown, black, blue, yellow, silver, and gold. Akin to de Rooij’s other hand-made weavings, these works are composed of different percentages of color, such that a single hue dominates each respective piece. These shaped works are accompanied by two more weavings in which the seven colors will be equally distributed, resulting in a muddy monochrome from a distance, and a voluptuous chromatic heterogeneity upon closer inspection. Presented on more traditionally shaped stretchers, these two works, whose central joints are respectively horizontal and vertical, equal the size of a tangram as a square. Together and individually, the Tangram weavings expand on de Rooij’s interest in the protean, and ultimately subjective significations of color, compounding its instability with that of form.

Finally, these slower pictorial pieces are complemented by the visual and olfactory immediacy of a new sculpture, Bouquet XVI, conceived especially for Legal Noses, and de Rooij’s second collaboration with local, LA florist, Joseph Free. Comprised of dried palm leaves and flowers assembled around Hollywood, the variegated spectrum of this work, at the level of the plinth, the vase and the flowers themselves, also reflects the full extent of de Rooij’s palette. Initiated in 2002 with his former collaborator Jeroen de Rijke, the bouquet sculptures consist of monumental, quasi baroque floral arrangements whose multiplicity reflect on issues of homogeneity and diversity, and whose temporal dimension inevitably refers to the Netherland’s rich historical tradition of the memento mori, among other things.

Willem de Rooij (b.1969, Beverwijk, Netherlands) studied art history at the University of Amsterdam, and art at the Gerrit Rietveld Academie and Rijksakademie in Amstersdam. Since 2006 he has held the post of Professor of Fine Art at the Städelschule in Frankfurt. He lives and works in Berlin, Germany. Current solo shows include The Trouble in Beauty: Willem de Rooij: Bouquet XI, The Henry Art Gallery, Seattle, WA; and Character Is Fate, Witte de With Center for Contemporary Art, Rotterdam, Netherlands. His work will be the subject of a solo show at the Museum für Moderne Kunst, Frankfurt, Germany in 2016.