Projector presents “Las Flores de la Noche” a documentary feature film where the power of friendship is manifested to reclaim life beyond heterosexuality. 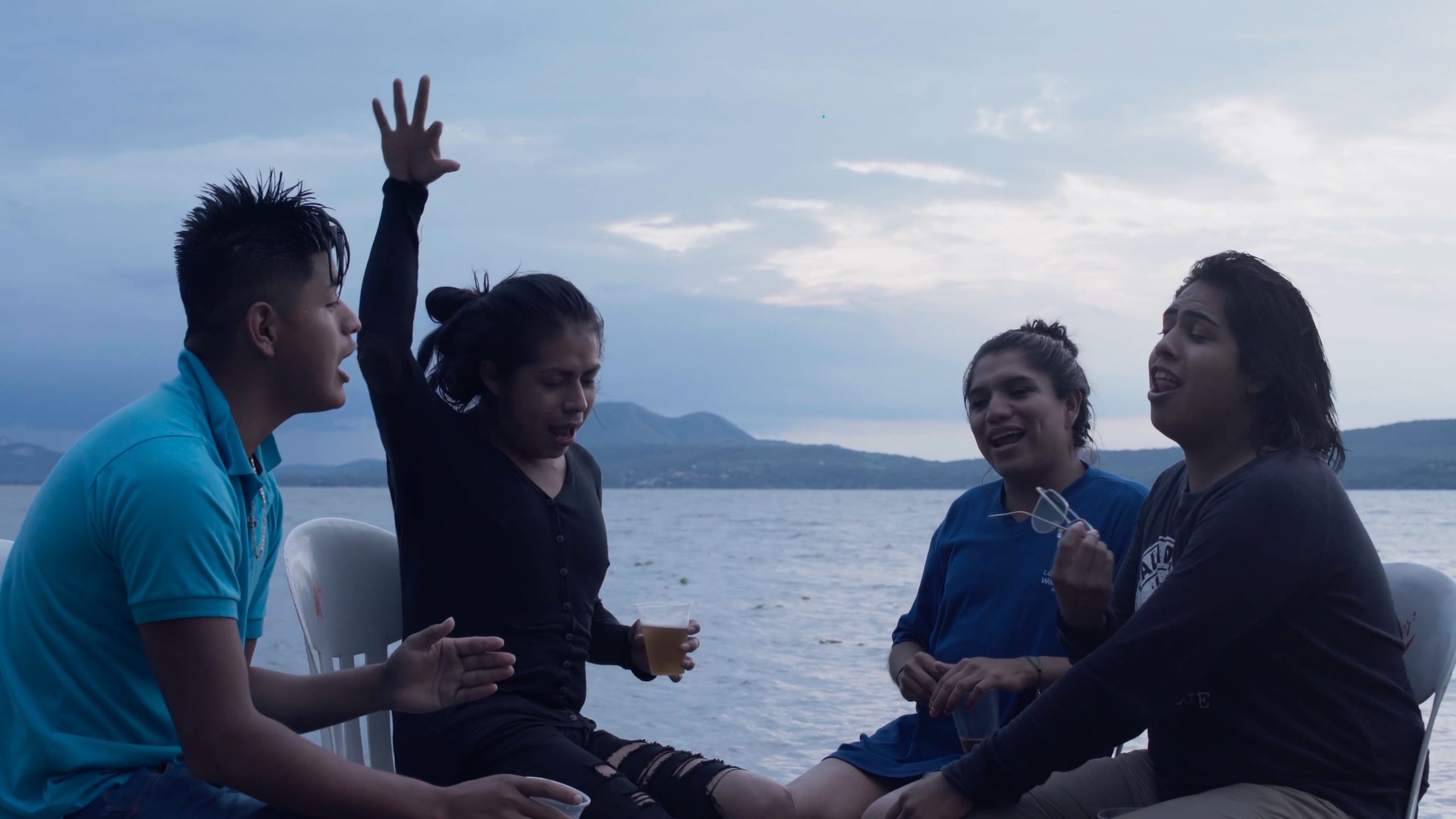 2020, 85:16
The movie will be available until July 27
Learn more about the film on their social networks.

The Flowers of the Night: The Power of Tenderness
By Andrés Treviño

We have just watched the movie Las Flores de la Noche, we find ourselves are in the center of Zapopan[1] and it’s raining. We take refuge in a canteen that we’ve never been too. It promises to be a very straight place. Omar and Lalo (directors of the film) take out a makeup palette and start to do our makeup, for all of us (a group of 6 gays). The table is already a combination of beers, tequilas, chicharrones, brushes, and glitter. The men in the canteen are watching us, we don’t know yet in which way or with what intentions.

After a while, a man who was drinking tequila at the bar approaches. We all keep a nervous silence. He tells us: “I am not part of the rainbow, but I see you and I can learn. Welcome to this canteen, I have never seen a man put on makeup but I learn and respect.” We smile because once again, the power of tenderness triumphed.

Stories like this would never have been possible in our lives without Las Flores de la Noche, the documentary feature film through which Eduardo Esquivel and Omar Robles have paid tribute to the youth, freedom, and pride of Alexa, Gardenia, Violeta, and Uriel, a group of four girls who, together, resist a world that still does not fully understand them. The film portrays a fraction of their lives. Without a traditional structure, it allows us to enter their group, get to know their dreams, understand their fears, but above all, admire the strength and courage with which they live every day.

They are the flowers of Mezcala de la Asunción, a rural community on the shores of Lake Chapala traversed by a history of resistance against Spanish and criollo colonization, a community that today exists between inequality and the absurd war against drugs. It is there where flowers found a way and a place to be powerful: through complicity.

The documentary is made up of a series of moments in which the networks of affection are present. As we watch it, it is inevitable to want to be part of this group of friends, share a beer by the lake, and return home singing with them.

Why do we want so much to be a part of it? Because despite all the adversities that their context imposes on them, they have something so valuable that not all of us have been able or wanted to have, a circle of tenderness that invites them or expels them, to break the rules of oppression.

“The mighty flowers of Mezcala” is how they call themselves and their power lies in the unconditional tenderness with which they stand in the face of hetero-cis-patriarchal violence, whether to help Uriel put aside his ECOSIG processes[2] and support him to undertake his beauty salon, celebrate birthdays or national holidays and even organize tranvestite shows in the street in order to raise funds for the operation of the daughter of one of their neighbors. They, despite everything, are happy and are willing to share their happiness with whoever accepts it. 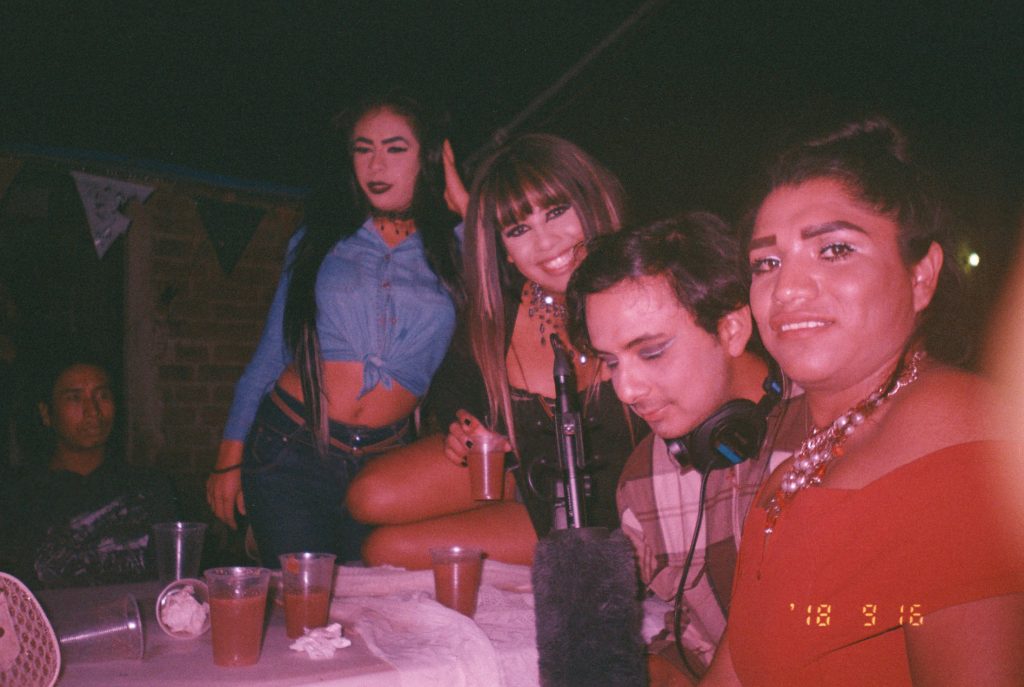 It’s no coincidence that all this is present in the documentary. It is important to pay attention to the creative process that allowed to represent these tender complicities with such intimacy.

When documentaries are made, especially about people of sex-gender disobedience, they are approached from a “case study” perspective, that is, someone who observes from privilege and sympathizes with the harsh realities that oppress us, which in many cases ends up re-victimizing. This is why it becomes so valuable to find a story that is told from love, admiration, and the value of the lives portrayed.

Over the course of four years, the directors introduced themselves to the life of the flowers because they wanted to be their friends. Making a movie was an excuse to achieve it. Just like us when we see the film, they admired the pride with which they live and after building an intimate friendship, they also managed to create one of the films that best represent the experience of sex-gender dissidences in our country.

Omar and Lalo bring to the screen the story of three trans women and a gay boy with enormous sensitivity and impeccable accomplishment. The film manages to open doors to audiences that otherwise would never get to know and feel part of a group of people that their prejudices had made them think they had nothing in common with them.

Las Flores de la Noche provokes emotional reactions in each of its spectators: from confronting us with other people’s realities and contexts to inviting us to form and care for our own circles of tenderness to resist what takes us away from freedom.

Las Flores de la Noche is a celebration of Alexa, Gardenia, Uriel and Violeta and all people of sexual diversity that we can identify with in aspects of their lives, it is also an invitation to live powerfully from our own tenderness. A radical lesson when living in a society that teaches us that power is the oppressor and that respect is obtained through violence.

Through this production, Muchachxs Salvajes (Omar and Lalo’s production house) portray the flowers as a reference of strength, love, and pride. Finding in them, trans women from rural contexts, a refuge that inspires us to love ourselves and others is invaluable.