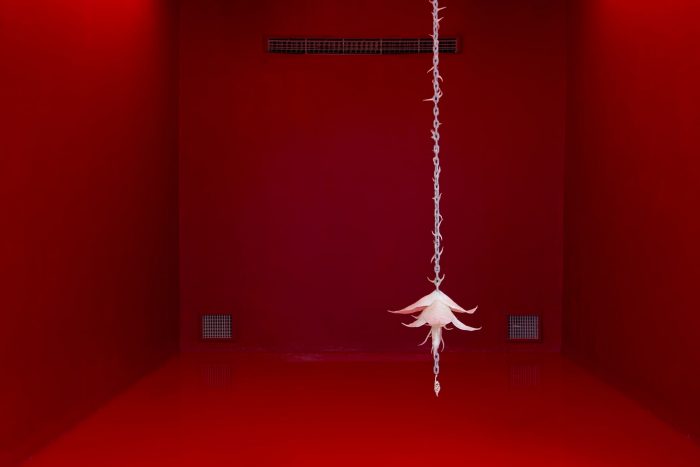 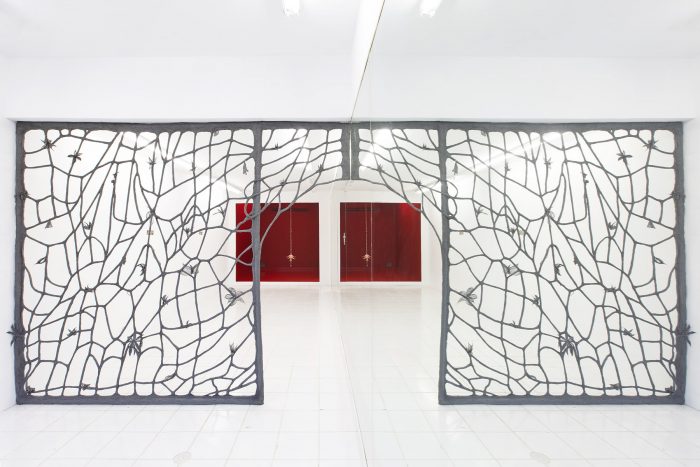 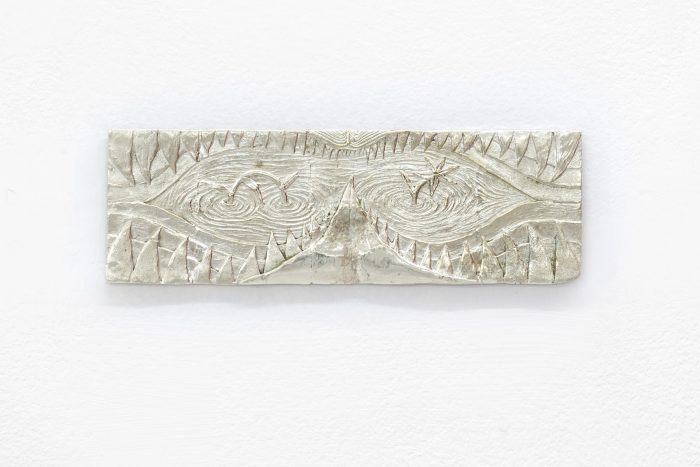 Embajada is pleased to present Janus , the first solo exhibition in Puerto Rico by the artist duo ASMA. The exhibition presents a sculptural installation along with a series of paintings and high-reliefs that construct a psycho-fantastic world where architectural elements are transformed into something living and organic. The construction of this internal space seeks to expand the traditional binary notion of the mythological symbol of Janus by extending its possibilities of containing diametrically opposed states. The exhibition makes use of contrasting materials that integrate an organic and corporeal viscerality juxtaposed against metallic and reflective rigidity with clinical and futuristic qualities; a semi-apocalyptic environment that is simultaneously alive and fertile.

In Classical mythology, there are several figures that either fuse or contrast two opposing elements. One such figure is from the Roman tradition —the image of the deity Janus , commonly represented by a bust with two faces positioned in opposite directions. This image metaphorically contains many meanings, such as those echoing a process of transition and renewal, thus providing the etymological origin for the month of January, to mark the beginning of the year, and the exit from the previous one. The image has also been employed on doors, functioning as a transitional point between one place and another, an entrance and an exit simultaneously.

Janus’ traditional function—in addition to personifying union— is actually to demarcate a transition, the transition from one state to another, which also reaffirms the separation of states of difference. The image works primarily to define a division between two opposites. In the exhibition, this transitory portal symbolized by Janus expands and becomes a third habitable space, a space/state which, in itself, does not require the viewer to move toward a pure definition, but is internally contaminated by everything that integrates it. Janus, then, as a living space is also an absent place of purity that mixes the natural with the mechanical, the past with the future, the imaginary with the real, good and evil, the living with the inert, the human with the animal, the soft and the rigid.

Janus, like a mirror, connects two adjacent worlds. The mirror as a metaphor in space activates this connection between two parallel places, expanding architecture and altering the way objects are perceived. This thin and transparent membrane becomes the central locus, which weaves everything around it. The mirror also mimics that quality, becoming a space in itself.

“Its form doesn’t matter: no form manages to circumscribe and alter it. Mirror is light. A tiny piece of mirror is always the whole mirror. Remove its frame or the lines of its edges, and it grows like spilling water.”

ASMA is an artist duo comprising the Ecuadorian artist Matias Armendaris (b. 1990) and the Mexican artist Hanya Belia (b. 1994). They hold an MFA from the Painting and Drawing Department at the School of the Art Institute of Chicago (SAIC), with a full merit scholarship (The New Artist Scholarship Award), and a BFA in drawing and printmaking from Emily Carr University with an entrance merit scholarship, and the Christopher Foundation Scholarship, as well as a BFA in Visual Arts from the Facultad de Artes y Diseño de la Universidad Autónoma de México (FAD – UNAM). They have exhibited internationally in Canada, Mexico, Ecuador, Colombia, Peru, Panama, Slovenia, Argentina, Brazil, Italy, and the United States. The duo has also participated in various international art fairs, including ArtLima (Peru), Material Art Fair (Mexico), Zona MACO (Mexico), ArteBA (Argentina), Artissima (Italy), and Ch.ACO (Chile).

«ALLÁ AFUERA TE ESPERA UN PAÍS PARA DISFRUTARLO (OUT THERE A COUNTRY IS WAITING FOR YOU TO ENJOY IT)» by Chemi Rosado-Seijo at Embajada, Puerto Rico