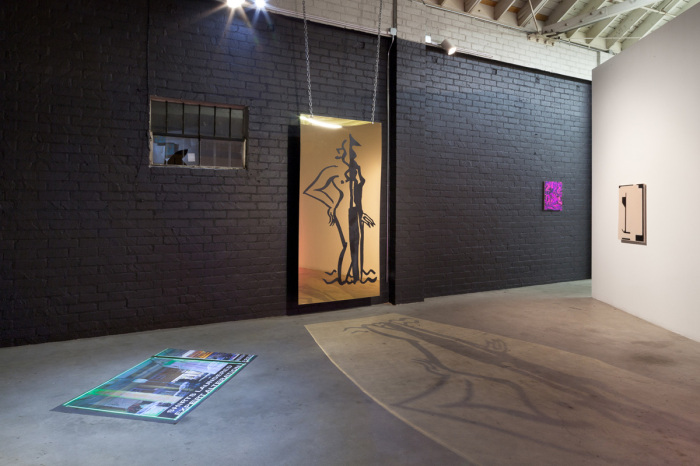 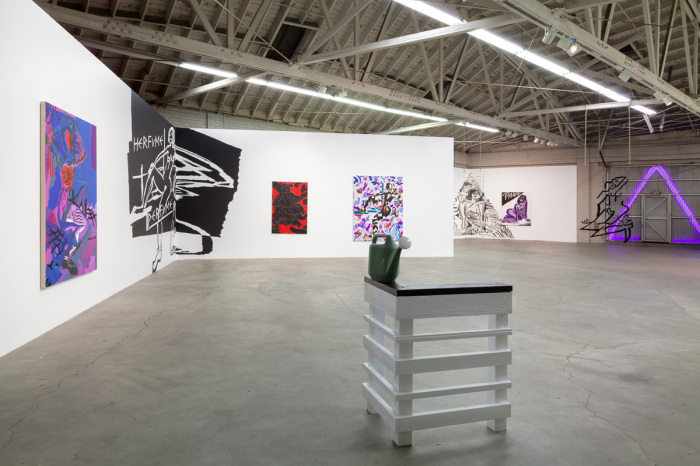 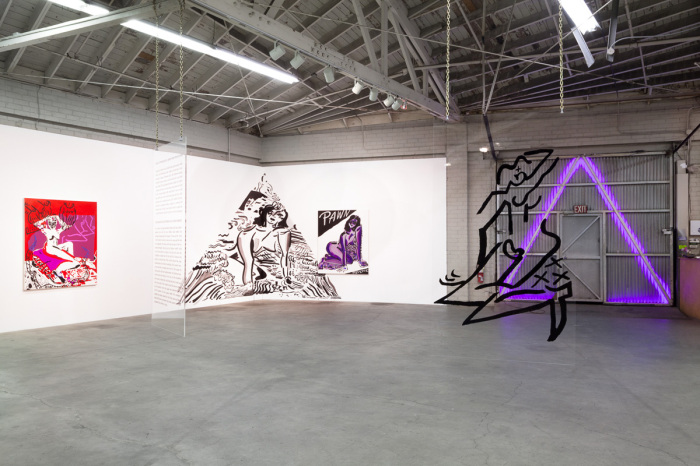 In Is She Is She Psychic Mira Dancy begins by imagining an ad campaign for a fictional fragrance Herfume Perfume. As soon as the name is spoken it unravels, however, and the riddle intrinsic to the name interrupts the product paradigm. Fumes are characteristically pungent, dangerous, and decidedly not fragrant… so perhaps Herfume suggests no perfume at all, but the scent of a woman “as-is”. A billboard-like image emblazons the gallery wall, and neons evoke images of storefronts and commercial signage. While these gestures conjure a physical feeling of the street and how the image of a woman is still so often reduced to a symbolic currency, the paintings describe a psychological and linguistic realm that resists quick narrative summation.

The paintings take cues from our daily digital experience, and every image incorporates some degree of distortion, overlay, or cancelation. Competing bold, graphic gestures race to be viewed first. Certain images repeat or transform from one painting to the next, sometimes creating the feeling of a cinematic flashback, other times simulating the iconographic logic of advertising. The feeling of satisfaction associated with the act of recognizing a shape or an image is compounded by the follow-up sensation of seeing the same image polluted, retracted, or negated. Color is used as a means to saturate the images, and blues, purples, and reds are deployed specifically to call up the look of neon in a darkened window at night…

Somehow the words PSYCHIC and OPEN are the only ones that stick.

Mira Dancy (b. UK, 1979) received her MFA from Columbia University in 2009, and her BA from Bard College in 2001. She has exhibited at Night Gallery in Los Angeles, and throughout New York and Brooklyn at venues such as Know More Games, Bull and Ram, Kansas Gallery, and Regina Rex. She is based in New York.

An awkward silence grows in between thoughts and gaps in conversation. Like a mushroom after rain it suddenly appears, fully developed, strangely both alien and familiar.

As a ghostly, uninvited guest who remains invisible yet acknowledged by all present, an awkward silence has the ability to open up a charged space in between people. A space to pivot in, but where intentionality, implied meanings, and anticipated reactions become unreliable.

If language is all consuming, these paintings can be said to exist within
the awkward silence of communication. Where illusions lays bare the hand that construct them and images propped up like proof unravels before the eye. The contract of the exchange evokes too much content but a desire to make connections persists. The awkward silence provides fertile ground.