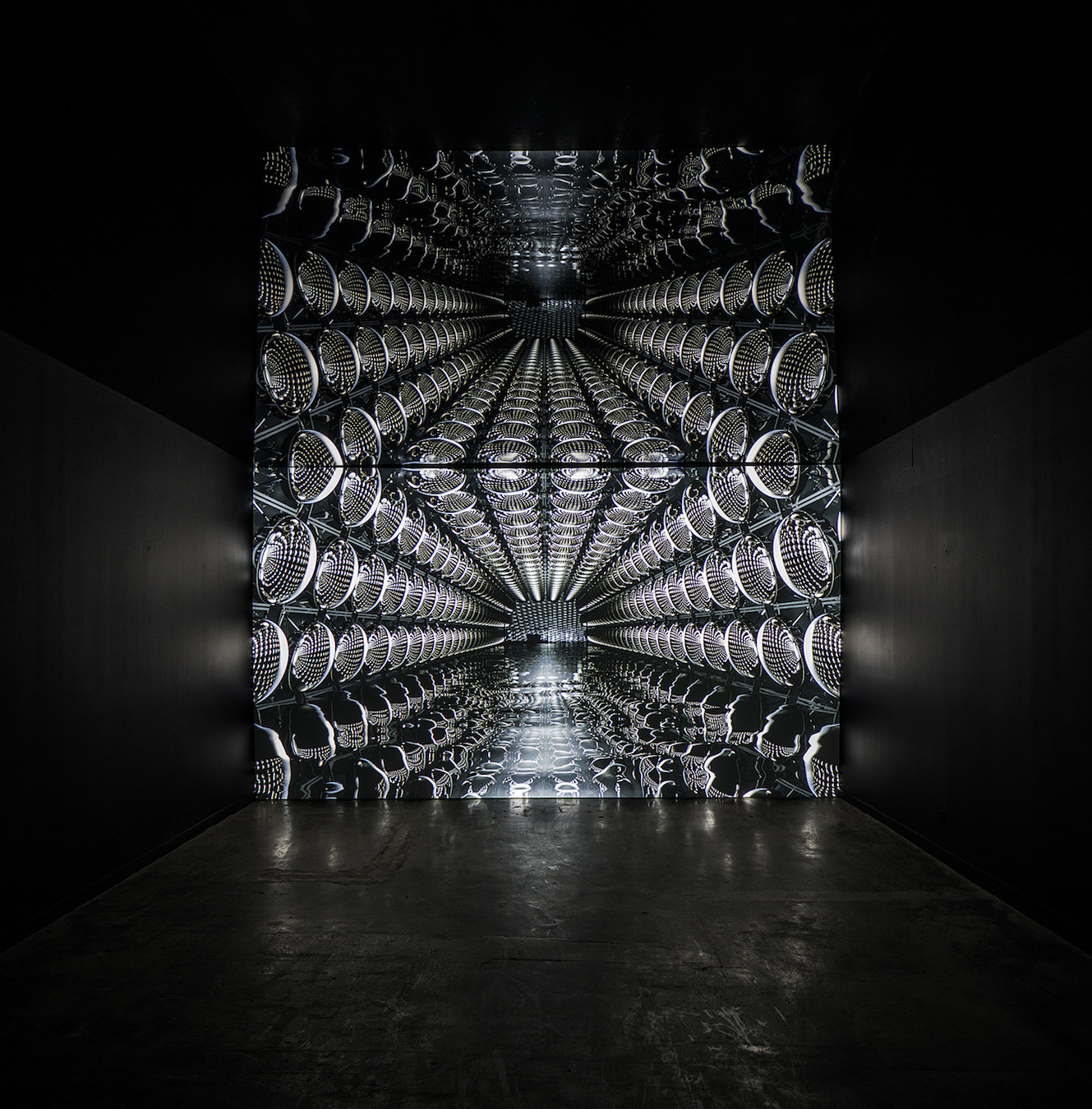 The desert, neither uninhabited nor alone: Notes on Hyperobjects, curated by Timothy Morton and Laura Copelin

Compared to their Chinese and Mesoamerican counterparts, western astronomers were late in observing a wide range of celestial phenomena. It wasn’t until the sixteenth century that Nicolaus Copernicus, drawing on discoveries made by Arab astronomers at the Maragheh Observatory, claimed that the center of the universe was to be found near the sun and that the earth, until then understood as the center of everything—of life, order, the cosmos, the sacred— in fact revolved around the sun while also rotating at a much faster rate on its own axis. However, for the monk and astronomer to change his perspective on the earth and celestial phenomena, his entire belief system had to change. As the philosopher Manuel DeLanda has said, changes such as those that took place in the sixteenth century are only possible through paradigm shifts.

Similar questions frame the current exhibition Hyperobjects, on view at Ballroom Marfa and co-curated by the philosopher and professor Timothy Morton and Ballroom’s director, Laura Copelin. The show marks a paradigm shift that in recent years has displaced—or at least attempted to displace—human beings as the center of everything. 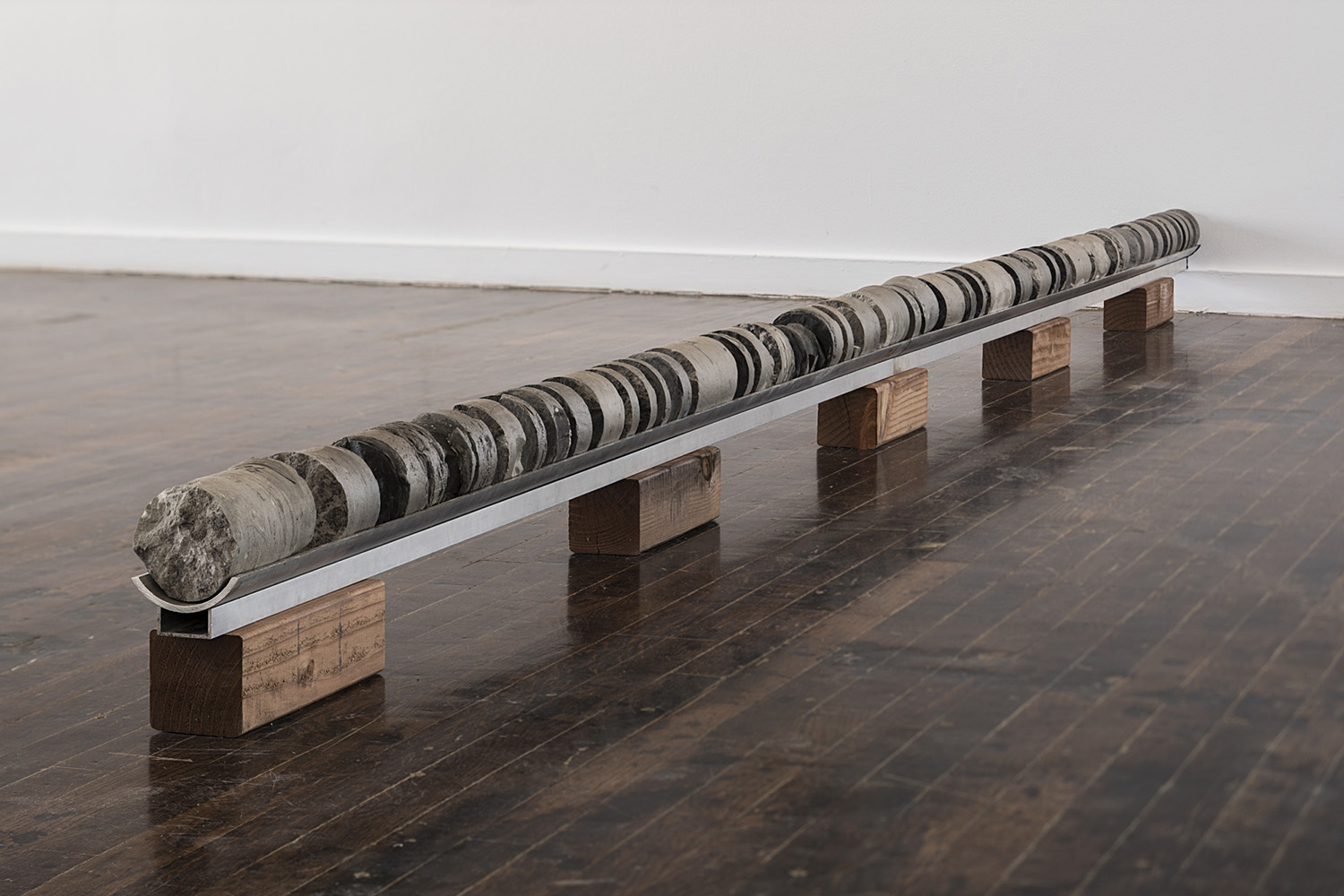 According to Morton, “hyperobjects” are entities that are “massively distributed in time and space” and therefore can only be observed using technological prostheses, computers or any other type of instrument created to contend with cosmic and geological scales. This group includes, for example, tectonic plates, radiation, and climate change. To this end, all the objects, or better put, “things” in the exhibition—ranging from stones and vegetable species to works of art—function as prostheses that expand or reduce the scale of entities described by Morton.

One of the most beautiful and obvious works in the exhibition is David Brooks’ Repositioned Core (Byproduct). Continuing with the formal treatment he is known for, Brooks here presents a collection of stones that were unearthed from oil extraction sites in Texas. Each stone comes from a distinct geological epoch and they have been installed on the floor on a metal structure resembling a train track or a half-pipe structure. The work is activated by the technical description that elucidates or translates the dimensions and the composition of the stone collection. From here, the work moves away from its formal representation as a series of stones in a straight line and starts to represent landscapes, climates, and now extinct species that over the course of nine million years were recorded in these forms. As DeLanda says, when we look at a mountain from a human scale, all we see is a rock formation, but if we observe it from a much broader geological scale, we can observe the interaction of tectonic plates crashing and releasing energy. Brooks suggests a similar scale for observing the world. Like a parabola, the work shows the slowness with which the sedimentation process operates in contrast with the rapid and rapacious pace of extraction and human consumption tied to the production and distribution of merchandise. 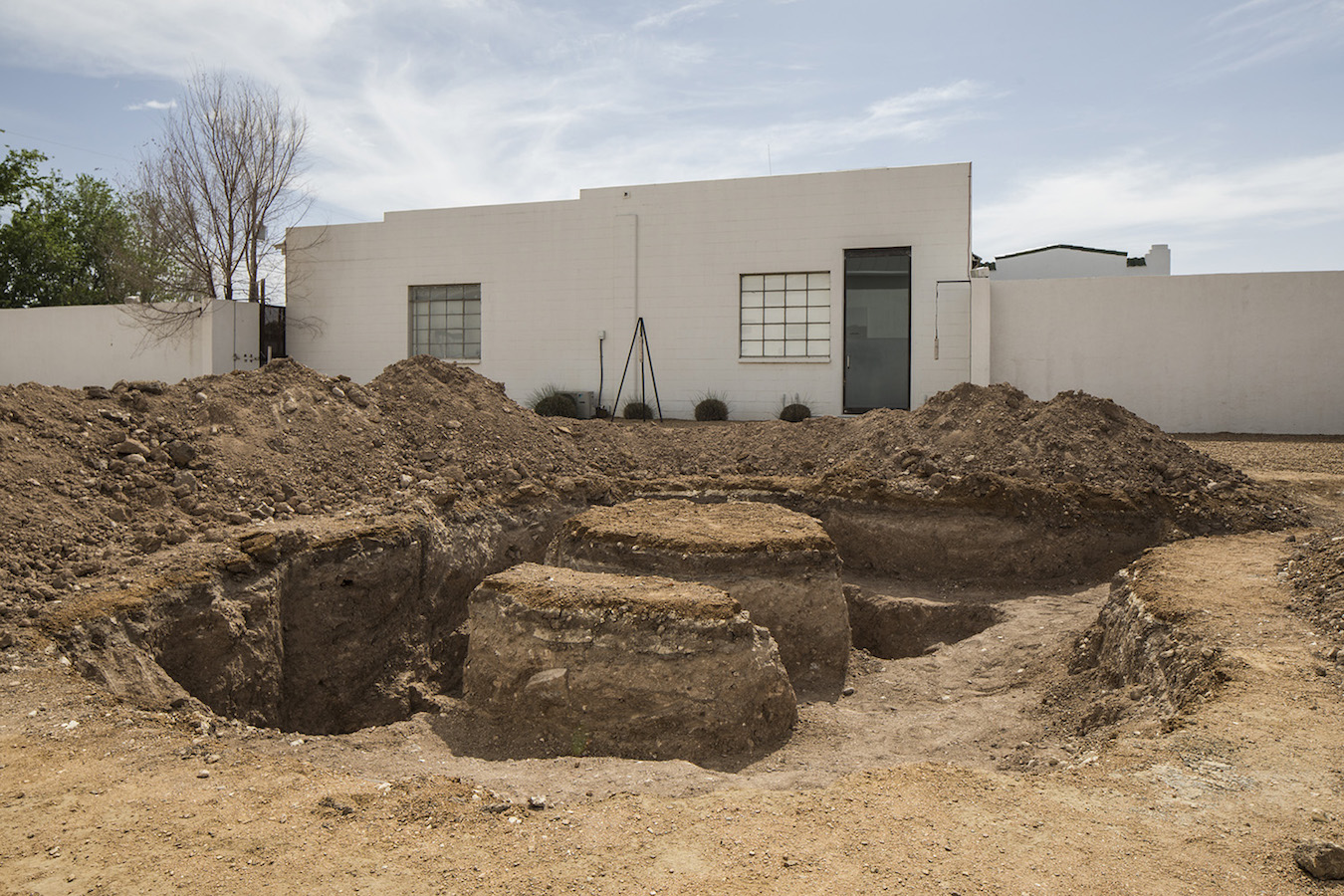 The objects found in the adjacent room respond to similar concerns. A group of rare and beautiful stones are placed on white pedestals, their veins revealing their age and their colors indicating the diversity of their chemical composition. These stones have been analyzed and classified by scientists from different universities and organizations across North America and although their intention is similar to Brook’s enchanting and challenging piece, they are far less engaging. What is the difference between these stones, understood as hyperobjects, described, selected, and installed by the curators, and a fetish? From an orthodox Marxist perspective, a fetish is an object loaded with singular characteristics in which labor and the material conditions of production are eliminated. On the white pedestal, the stones appear as fetishes that fail to offer a new way of seeing and instead demand veneration and respect. The scientific evaluation and the white pedestal produce singularity and determine the place from which one sees these stones. Rather than highlighting a paradigm shift, this piece reinforces our current paradigm, one in which the dictatorship of experts prevails.

Maintaining distance and proportions, something similar occurs in the work of Rafa Esparza—one of the most interesting and potent artists who has amplified the voice and demands, both political and aesthetic, of Latino communities in the United States. However, in the context of this exhibition, his work operates as a “singular” and “mysterious” object, as another fetish. Esparza’s work consists of a grouping of adobe bricks. In contrast to earlier installations in which the bricks were always placed together in a tight, organic configuration, here they are set slightly apart. The way they relate to one another is not important here, and neither is what they build together—walls and homes—rather what matters is the material they are made of. From my point of view, this framework, and its insistent emphasis on the agency of things voids or complicates the LA-based artist’s political commentary. Moreover, any curatorial script that focuses on the material Rafa Esparza uses to make his work without considering the bodies and labor of immigrants only underscores and reactivates the violence they have historically faced. 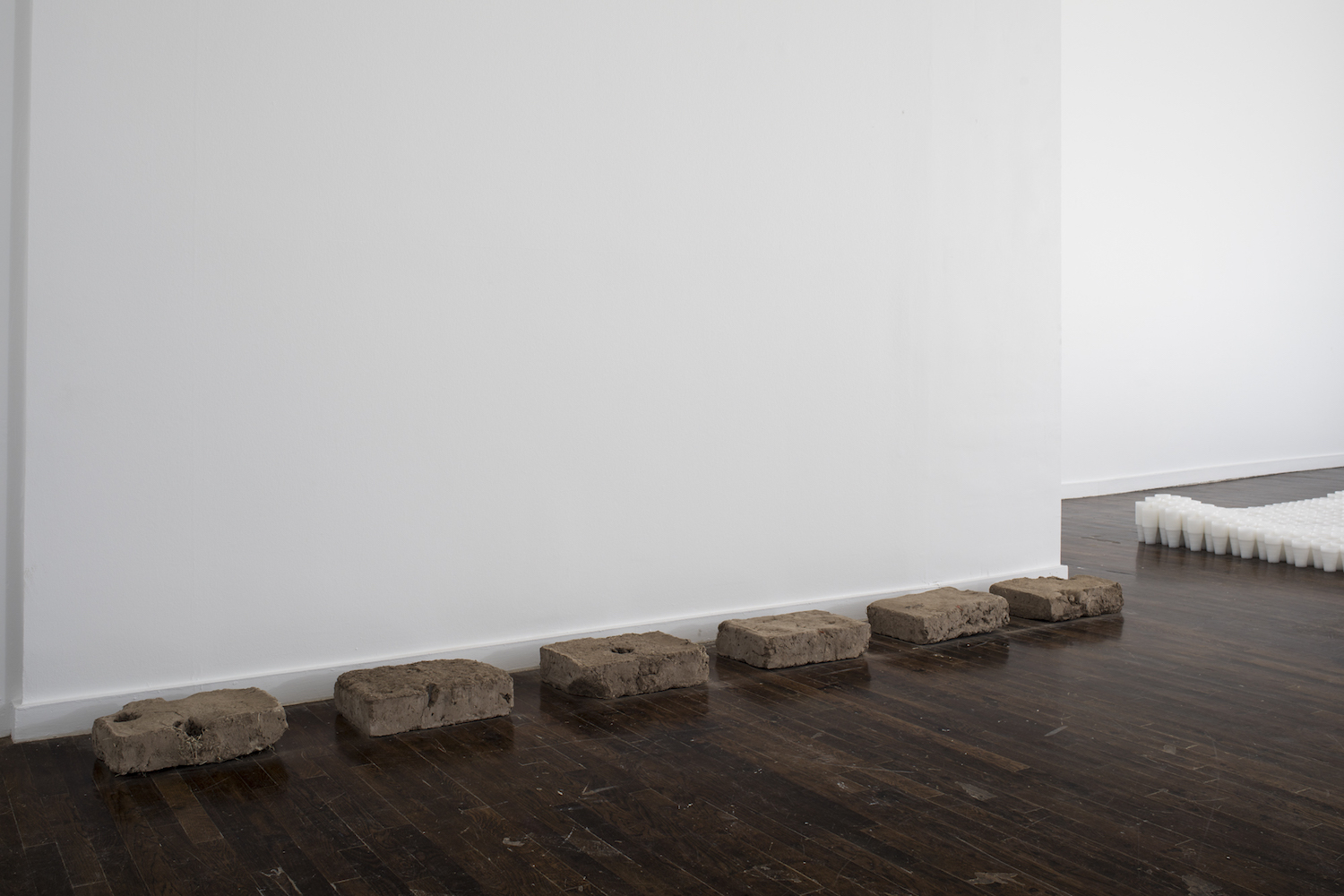 Be that as it may, the case of Rafa Esparza seems paradigmatic to me. Although this frame erases many of the questions inscribed in his objects, his presence makes cracks or fissures in the curatorial line. Esparza is also interested in the realm of the sacred, as his work shows that this other way of looking does not always rest on the technological prostheses of occidental astronomers, but also in another relationship with the world; a relationship based on language, words, and the movement of rites to create a cosmic and epidermal connection between indigenous people (los pueblos) and other communities (entidades) that share the territory. But in order for this relationship to be possible, indigenous communities rely on reciprocity and collective labor. This dislocates the violence of the (neo)colonial gaze that only understands nature as a vast and unlimited array of always available natural resources.

In relation to this context, perhaps the work of Megan May Daadler, The Mirrorbox, will help us explore reciprocity or that diffuse space between self and the other. Thanks to a technological prothesis that resembles a helmet or a strange virtual reality visor, two individuals are able to see the other person sharing the device with them, or depending on the amount of light filtering into the object, they may see themselves. The helmet or prothesis shifts from opacity to transparency, working alternatively as a mirror and a screen. This provokes a splitting, an exercise of forced empathy. Like any helmet, it ties and conforms to the person(s) wearing it. It makes them vulnerable. Uncomfortable. And as in situations of absolute vulnerability, as Judith Butler suggests, one does not choose who to is close, however, collective work is chosen as a strategy to cope with or survive that context. 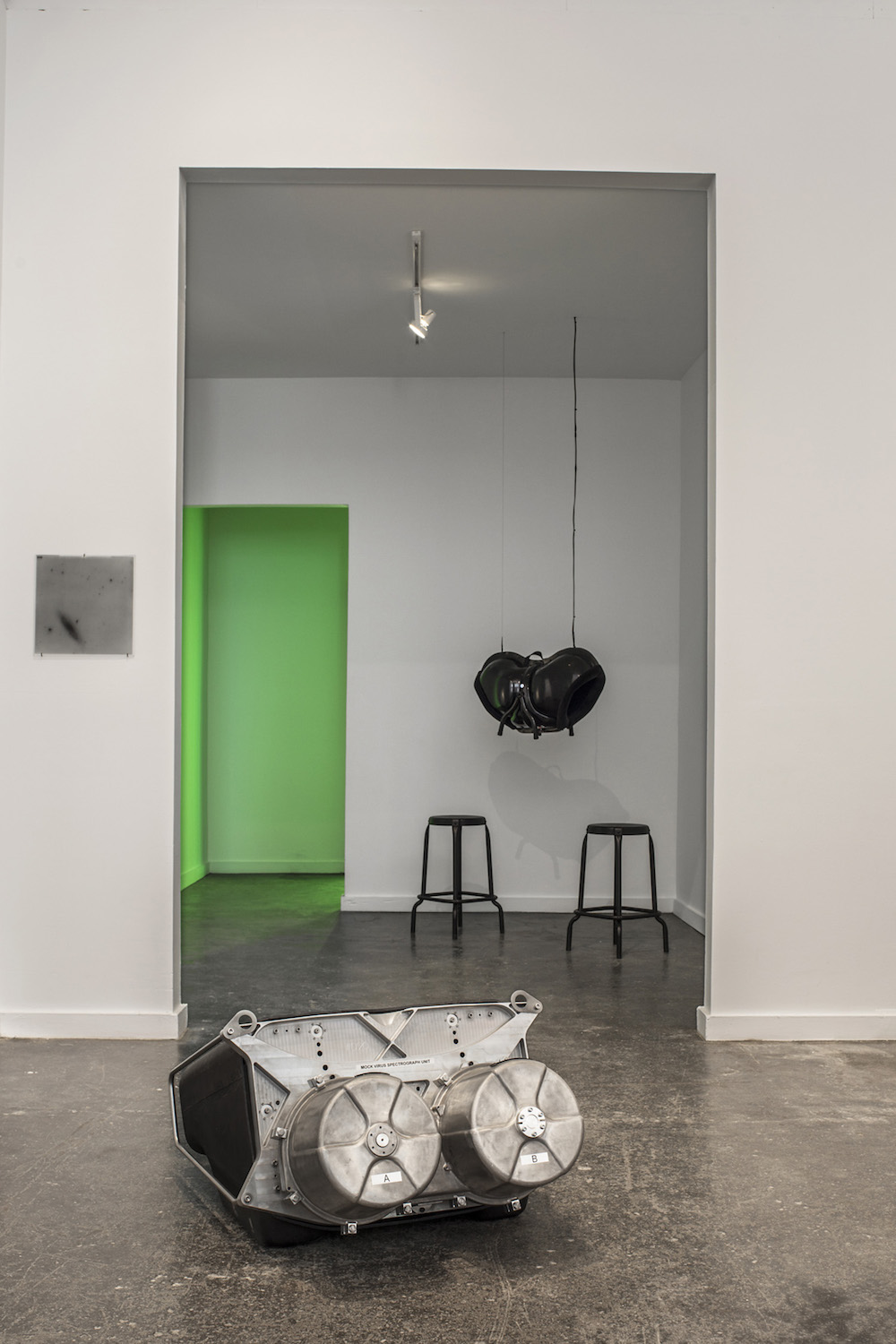 Outside, there are three pieces installed in the building’s patio. On one side, holes have been dug by Nance Klehm that force the spectator to live in or experience a clean and protected fragment of the desert; and on the other side one finds Sissel Marie Tonn and Jonathan Reus’s Intimate Earthquake Archive. This work consists of a digital archive of all the earthquakes provoked by hydraulic fracking in Holland using a strange vest-like apparatus that reproduces the subsoil movement on the skin of its wearer. If David Brooks’ piece is gimmicky and shows us the slow and calm rhythms of the earth in contrast to the speed of capital, this piece reduces the scale and brings it close to the body, reproducing the movement and rhythm of the tectonic plates upon the body.

In the patio, the work of Nance Klehm, Sissel Marie Tonn and Jonathan Reus is interrupted by a murmuring voice. For this exhibition, the collective Postcommodity created a sound-based intervention made up of short texts, read in a spectral voice that rises, like a ghost, from time to time. The voice speaks about the desert, specifically the border and coyotaje. [1] Strange as it is, Marfa is a border town. Interestingly, this is the only piece in the show that points out that the desert is not just massively distributed in time and space, as Timothy Morton understands it. The desert is not an “unpopulated” and “empty” space: something is always happening there. Cerulean blue lizards sweep over the ground; antelope walk slowly and cautiously along the horizon, turning in search of hunters and onlookers; vultures and other raptors fly over areas where animals have already died and are decomposing thanks to the painstaking, arduous work of ants, other insects, and microorganisms; but it is in this desert where laws, rules, and bureaucratic structures intersect and turn it into a vast art gallery, a piece—a wire, a spike, a closed door only open to a select few—of one of the busiest and most violent borders in the world. In Texas in the years since the North American Free Trade Agreement was implemented, I don’t think it is possible to talk about the desert or the agency of the desert without understanding it, as suggested by the anthropologist Jason de León, as a site that, due to official instructions and a discourse that villainizes immigrants, has been made into a weapon or tool to destroy immigrants in the most violent, brutal way possible, eating and devouring all of them: their bones, their belongings, and their family ties, starting with the separation and confinement of mothers, fathers, and their children. 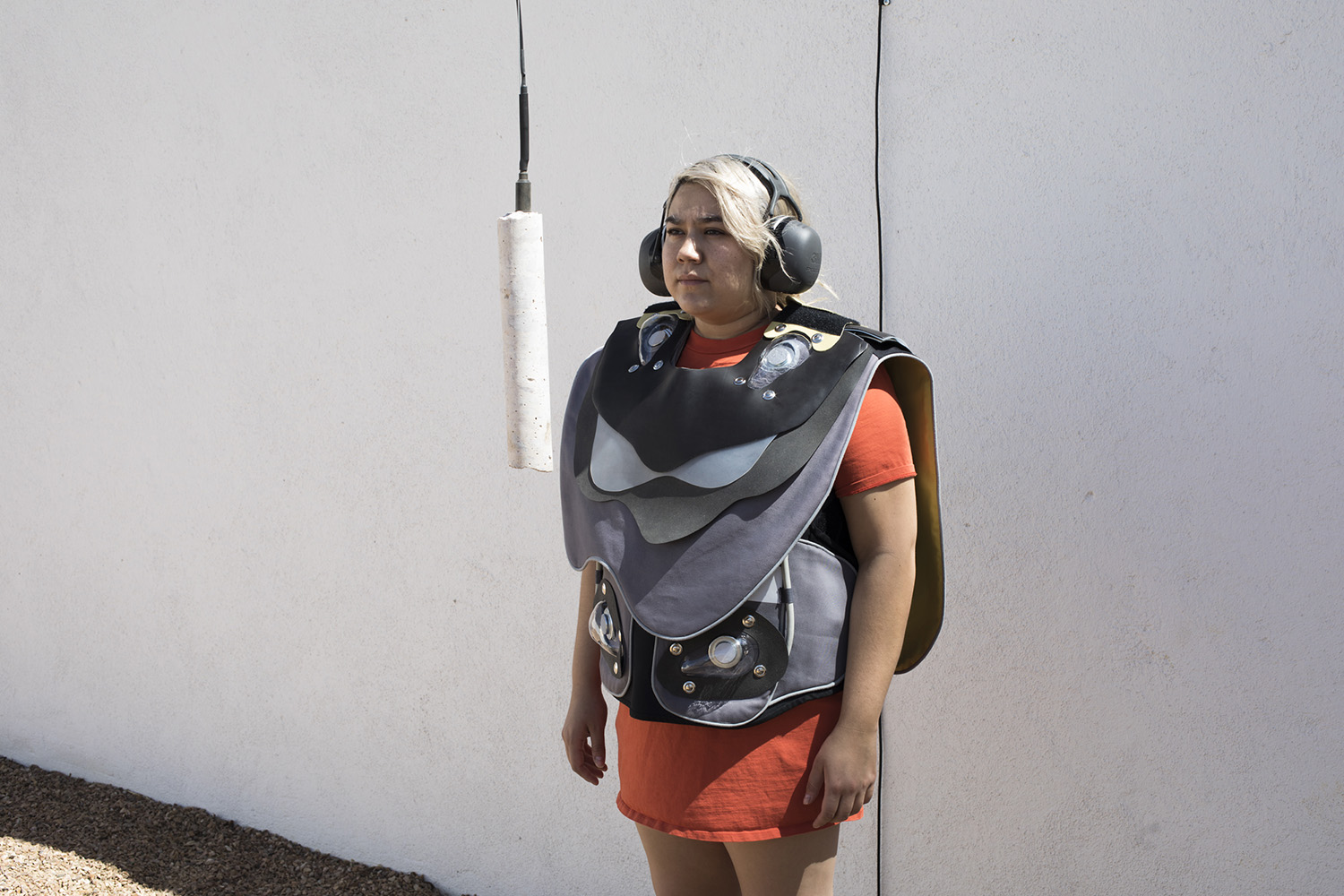 After walking through the exhibition, it is clear that the objective is to teach us another way of seeing, another scale. In the text published on the exhibition space’s website, the editor asserts that “to understand a hyperobject, we must transform the way we see and experience the universe.” Marfa is ideal for this, starting with problematizing the city itself in which the uses and users of space have been reconfigured, provoking absolute gentrification, the most savage and least visible segregation possible, and its transformation along a border so sophisticated that it hits you while smiling and extending a hand. Although we want to displace the human being from the center of everything, we must do it carefully. The works collected in this exhibition represent or point a “change” of paradigm but are not exhibited or framed from the context where they are found.

[1] Translator’s note: Coyotaje refers to the practice of smuggling people across the US/Mexico border. Coyote is used colloquially to refer to individuals who are hired to assist in getting people into the US while evading immigration authorities.