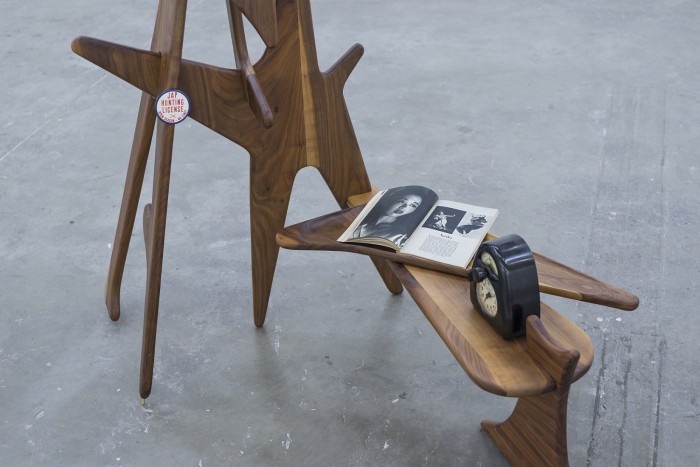 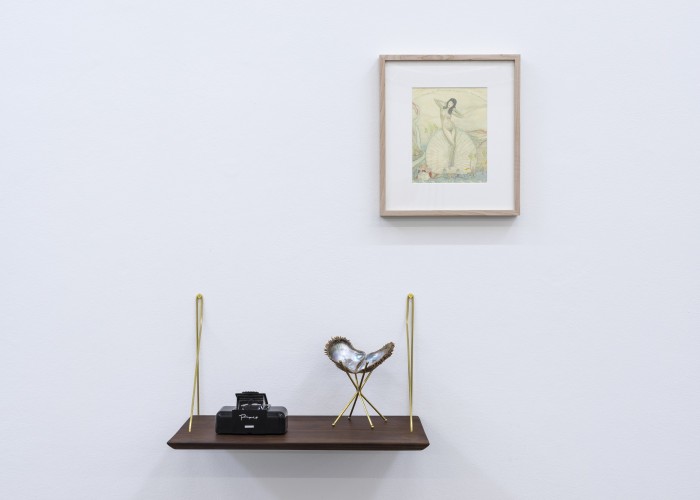 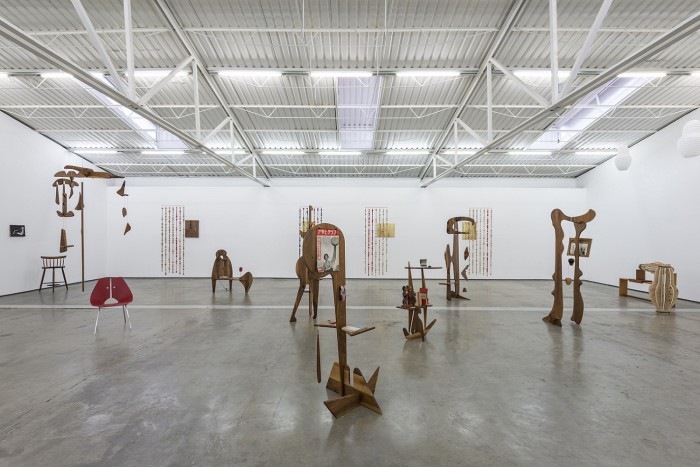 Edgar Orlaineta’s most recent project turns to the notion of Interlocking Sculptures, coined by Isamu Noguchi (1904-1988) in the 1940s. The legacy of Noguchi, who was born in Los Angeles to a Japanese father and an American mother, is noted for its sculptural experimentation linked to furniture and lamp design, as well as to costumes and scenography, which are the point of departure to Edgar Orlaineta’s investigation. Based on this legacy, the exhibition History is taking flight and passes forever is divided in two episodes. While the first room formally echoes the work of Noguchi, the second has as starting point the work of industrial designer Ray Komai. The show’s title refers to a fragment written by Isamu Noguchi in a letter addressed to Man Ray in which he shares his frustration of being held captive in an internment camp in Poston, Arizona.

By scrutinizing the relationship between Noguchi and these internment camps, established in the USA after Pearl Harbors’ bombing (December 7, 1941), Orlaineta conceived a series of sculptures based on formal, aesthetic and conceptual «knots», whose leitmotiv are the lives and creations of those artists effected by said events. By incorporating a selection of memorabilia and design objects into the works that reinterpret the Interlocking Sculptures, the project expands this notion and approximates new aspects in which the formal becomes historical, whilst the exhibition itself becomes a sort of stage linking the aesthetic to the social and political. Through this combination of «formal knots» the artist interweaves aesthetic concepts with historical references, thus creating a tension between «autonomous pieces» –that is formalist sculptures– and «heterogeneous dispositives»: book shelves, acquired objects, ready-mades, fetishes, etc. In this sense, the combination of resources give way for the «autonomous» works to inscribe a particular historic imaginary –the suspension of human rights and racism–, eluding the classic notion of the public commemorative monument, whose purpose is to recall national triumphs.

The concept of Interlocking Sculptures (sculptures assembled with an equilibrium of each individual element) is initially conceived in the formal reproduction of the same biomorphic elements and materials used by Noguchi. Thus, the exhibition is allied to an aesthetic that favors the artisanal over the industrial: carved and turned wood, folded brass, serigraphy on linen and paper, metal and plywood constructions as well as a pearl with a silver center originating from a 16mm black and white positive. As a whole, this show can be read as a stage which displays not only the technical and aesthetical aspects of Noguchi’s legacy, but also the historic pertinence and social context in which such creations took place.

Throughout his artistic practice, Edgar Orlaineta has rigorously delved into studying the intersection between sculpture and design –the relationship between art, craft and the industrial–, which led him to collect memorabilia of distinct iconic artists and designers. Thus, the notion of interlocking proposed by the artist does not merely focus on technically resolving the ensemble between the sculptural and the found. In the same manner, Orlaineta pays tribute to distinct figures who, like Isamu Noguchi, lost their freedom during the Second World War and who went on to contribute substantially to the cultural and artistic development in the United States. Among those figures are Ruth Asawa, George Nakashima, Tura Satana, Ray Komai, Miné Okubo, Larry Shinoda, Yoneguma and Kiyoka Takahashi, to name a few.

The second exhibition room likewise touches upon issues of race and the stigma that Japanese-Americans suffered during the war. By interpreting a piece by Ray Komai titled Masks, which was designed for Laverne Originals (NY) in 1948, and inverting Komai’s well-known folded plywood chair (1949), now rebuilt by Orlaineta as a Wire Chair, aspects of camouflage and invisibility become virulent. The chairs and the white masks blend with the white cube, while the camouflaged fabrics and the peasant garments gain visibility. These camouflaged fabrics echo Komai’s patters, which were originally commissioned for Laverne Originals, a company that in turn was hired by the US government to produce military uniforms. Thus, the notion of the interlock bridges the two rooms in order to reflect on the aesthetics of the invisible. As a whole, the exhibition evidentiates historical and social issues around racial stigmatization, the violation of human rights and racism.