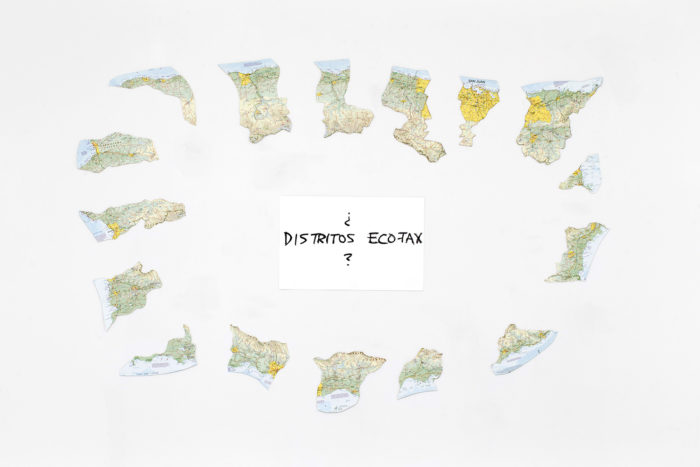 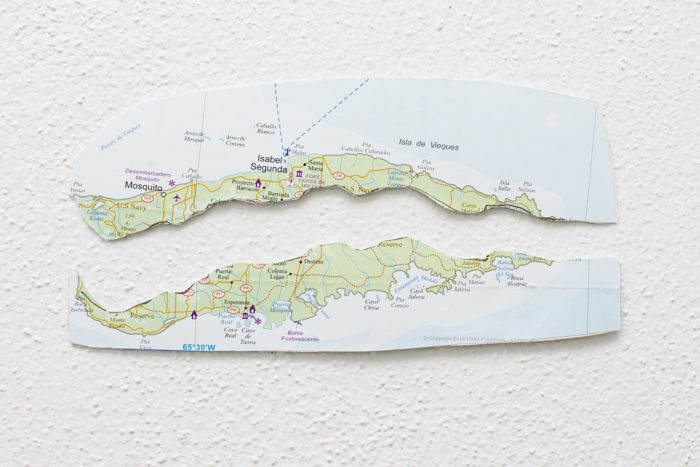 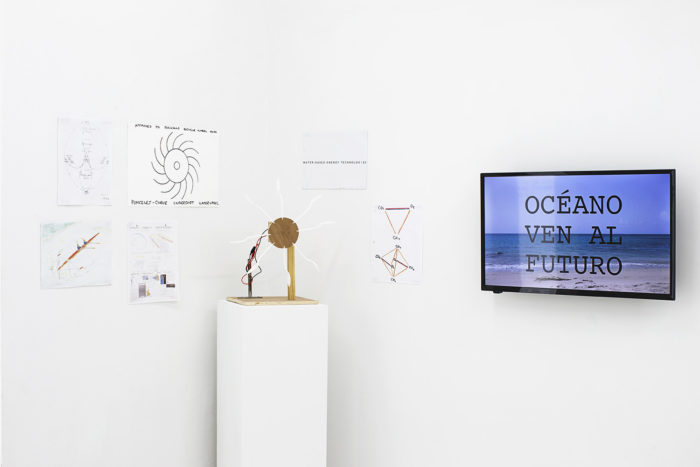 Peter Fend has studied the topography and oceanography of nearly every part of the world, organizing terrain according to water systems rather than geopolitical boundaries. He believes that most historical patterns of migration, ideology, sovereignty, militarization and industry are determined by and organized around saltwater basins. Fend proposes working with the ocean and its inhabitants in a non-invasive way to harvest energy for creating self-reliant and ecologically sustainable economies.

For ​Hace Sentido / Makes Sense, ​Fend has produced evocative words stacks in collaboration with artists and curators from Puerto Rico, New York and Ecuador which reference the privatization of the Puerto Rico Electric Power Authority (PREPA), the need for eco-tax, and the island’s struggle with multiple forms of exploitation of a post-Maria crisis. As a renewable energy scheme, the waterwheels do not rely on any intra-governmental or corporate facilities and they are low cost and DIY. A map of Puerto Rico divided by its watersheds stands on the back wall as a proposition by TVGOV (Television Government). These watersheds propose the possible districts for tax revenue of an ecological government.

As the government prepares to privatize and sell off PREPA, which is deeply in debt and failing to function even at the most basic level as a provider of electricity throughout the island, what can one do to enable self-sufficiency in lieu of a climate denying American junta, a burgeoning crypto-colonialist economy, or neoliberal Elon Musk who calls for “solar panels for everyone”? To liberate the world from both fossil fuel dependency and ecological exploitation, new forms of collective and communal power must be implemented to de-center terracentricity. We must look the oceans and work with them not against them. It just makes sense.

For nearly four decades Peter Fend has attempted to push his practice beyond aesthetic engagement, instead prioritizing materialist intervention in ecological systems. In 1980, along with the artists Jenny Holzer, Coleen Fitzgibbon, Richard Prince, Peter Nadin, and Robin Winters, he co-founded Ocean Earth Development Corporation that collaborated with scientists in order to develop strategies for reorganizing information according to ocean basins in lieu of political borders. The final room at Embajada traces the work of Ocean Earth Development Corporation and Peter’s own long-term commitment to ecological engagement and mapping that effect all parts of the planet. A rare copy of the 1993 ​Ocean Earth Development Corporation publication, along with many of Fend’s handwritten notes, videos, publications and project proposals related to water-based energy technologies were on view for visitors to spend time with.