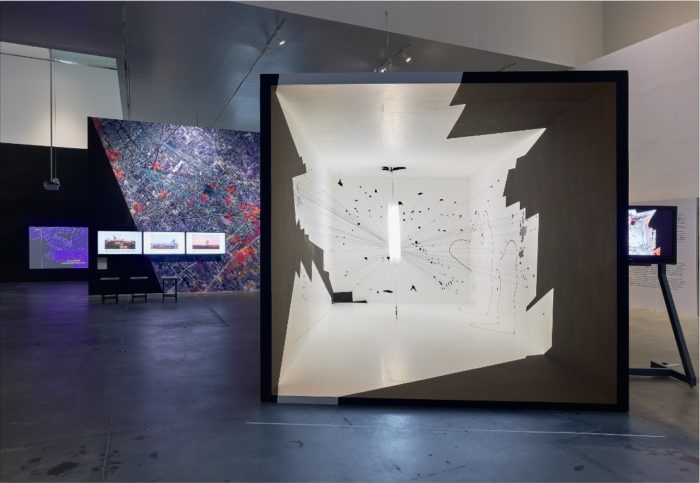 An archeology of defeat

A tool remains marginal, or little used, until there
exists a social machine or collective assemblage
which is capable of taking it into its ‘phylum’
Claire Parnet in dialogue with Gilles Deleuze, 1987

In her article “Mujeres blancas buscando salvar mujeres color café”[1], Karina Bidaseca defines contemporary savior rhetoric, with its implicit discursive and legal colonialism, as «the ongoing attempts by some feminist voices to silence women of color or speak for them» (Bidaseca 2011). This “savior rhetoric” not only occupies the relations imposed by “white” feminisms, also conforms hegemonic global speeches that become extensive to other efforts, sometimes well-intentioned, to denounce from the “North” the political conflicts historically located in the “Global South.”[2] Thus, voices in resistance—those Ranajit Guha calls “small voices” (2002)—are swallowed up by other, voices that shout louder and seek to translate the efforts of the counter-hegemonic “small voices” giving them legibility in the public sphere to regulate and to order their efforts in the search for fairness between those who hold power and those who lack of it.

How can we distinguish, to paraphrase Bidaseca, the voices of actors and their interlocutors in a global context? When is a voice its own? When is a voice suffocated, swallowed up, translated, or silenced? Should we lower “our voice” and offer space to others so that “small voices” can circulate and be heard in the public sphere? Gayatri Spivak’s answer would likely be no, since we don’t even have a voice to lower (Spivak 1988). Our voice has historically been consumed by the “coloniality of power.”[3] If “our” voice lacks a place of enunciation, it is because our memory has been carried off and branded by colonial domination.«The only political option that is possible for the subaltern is precisely to stop being subaltern, in other words, to raise our voice and make it our own, but in some sense other than representation» (Bidaseca 2011). 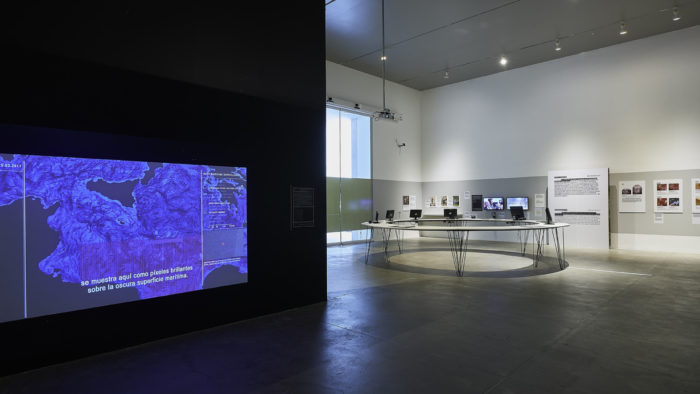 How do certain contemporary aesthetic processes that feed on conflicts originating in the “Global South” [4]—in this case, I am speaking specifically about methods proposed by the Forensic Architecture (F.A.) “agency”—get the counter-hegemonic voices they work with to speak and express themselves?

Forensic Architecture is a collaborative project that links technologies and research tools from the fields of architecture, aesthetics, and forensic science to present material evidence and testimonies from political, territorial, environmental, and armed conflicts. The group takes on projects in response to specific petitions from international and non-governmental human rights organizations.

The architect Eyal Weizman, who founded F.A. in 2010 and is it lead researcher, refers to the project as an “agency.” If we consider the etymological meaning of the Spanish term “agencia” as «the service authorized to act for others,» [5] it clearly describes the collective labor of architects, journalists, filmmakers, designers, and visual artists working out of the Centre for Research Architecture at Goldsmiths, University of London, although the work of F.A. also includes mediation, dialogue, and translation for the testimonial aspect of the practice. The exhibition Forensic Architecture: Towards an Investigative Aesthetics, curated by Rosario Güiraldes and now on view at the Museo Universitario Arte Contemporáneo (MUAC) in Mexico City, provides a tangible look at F.A. as a practice. The extended wall essay installation reveals the concerns, interests, and phobias of F.A.’s theoretical framework, called “investigative aesthetics,” which seeks to construct narratives that correspond to the needs of social organizations by using contemporary aesthetic sensibilities as investigative resources that shift our political vision. 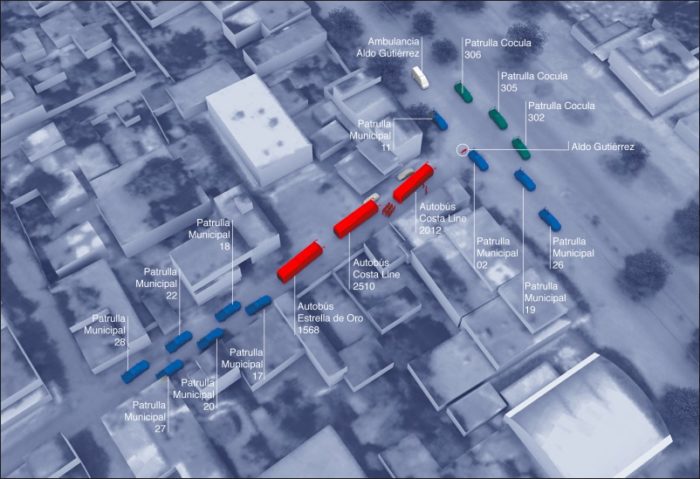 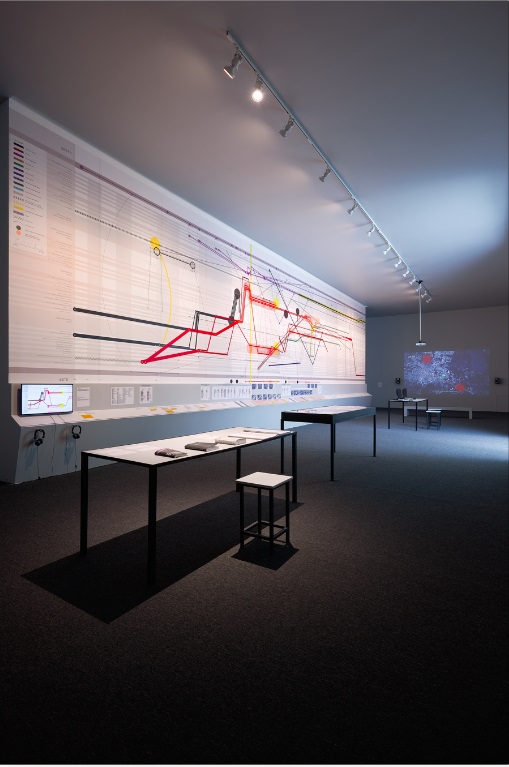 As one moves through the exhibition featuring nearly twenty “cases”—among them the forced disappearance of students in Iguala, Guerrero on September 26 and 27, 2014—one discovers an array of records including maps, logs, renders, satellite images, data transcripts, factual reconstructions based on numerous geolocation programs, and evidence and testimonies captured on video with the “voices” of those who have survived the state repression apparatus.

However, these “voices” are rarely given the chance to express themselves as they are constantly mediated by the thirty F.A. collaborators—the majority of whom are graduates of Goldsmiths, University of London—who lead the interviews with skewed questions that seek to produce responses that can be visualized, rendered, or engulfed by the display technology and the diverse platforms that the agency uses to develop the digital archeology plans they are interested in investigating and exhibiting publicly.

After walking through the exhibition, and especially after viewing the interviews that make up Liquid Traces: The Left to Die Boat Case (2012-14), Ground Truth: Testimonies of Dispossession, Destruction and the Return in the Naqab/Negev (2015-), and Saydnaya: Inside a Syrian Torture Prison (2016)—all of which feature testimonies of violations of international human rights laws and international criminal law—one is left with the sensation that our interactions with certain “voices” seen and heard on the screens and projections throughout the exhibition are held up by neocolonial scaffolding: a prosthetic that shows us only the facets of the conflict that F.A. wants us to see. In this way, the investigative “agency” imposes a single, collective voice in the exhibition gallery that yells at, instructs, and controls the “others.” 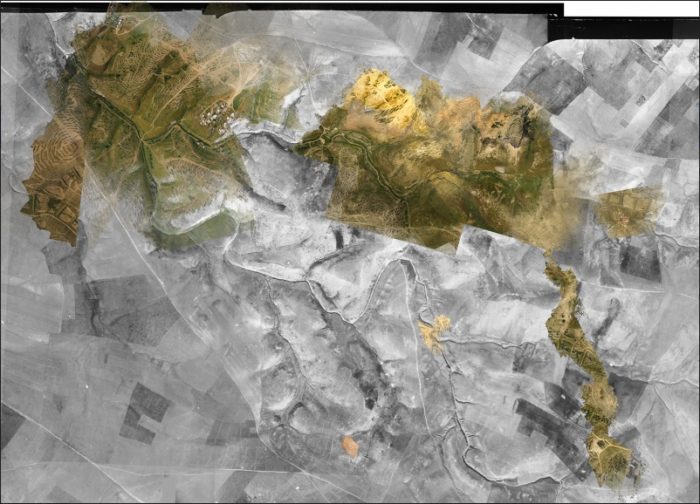 The victims and testimonies are treated like algorithms or data that will contribute to obtaining evidence that will eventually contribute something (or maybe nothing) to the resolution of conflicts. It is important to highlight that none of the cases that F.A. has provided evidence for have been resolved by the corresponding national and international authorities.[6] In this sense, we cannot ignore the sensation when we look at the exposition as a whole that we are witnessing an archeology of defeat.

Based on what has said above, I want to pose an open question: Is it possible to collaborate, from a privileged place of enunciation like the University of London, in scenarios of precarity and dispossession without being patronizing and appealing to welfarism and the savior rhetoric implicit in contemporary neocolonial history?

Who authorizes Forensic Architecture to speak for “others”? A long list of international organizations, in fact, including the UN, Doctors Without Borders, and Amnesty International, as well as non-governmental organizations (NGOs) that have played a fundamental role in understanding conflicts and providing care for victims, like the Interdisciplinary Group of Independent Experts (GIEI, acronym in Spanish) based out of Buenos Aires, or the Centro Prodh in Mexico City, which is involved in the case of the forced disappearance of 43 students from Ayotzinapa, Guerrero. All of these groups form a list of networks that F.A. has composed since starting operations seven years ago. These organizations commission F.A. to support their operations through research and investigation of evidence that will be visible in the public sphere, called for by academic forums as well as art institutions and other exhibition sites such as Documenta 13 in 2011.

For the Epistemologies of the South [7], the Universal Declaration of Human Rights, instead of functioning as a legal tool to fight for those who are marginalized by power systems, has served—in some cases—as a mechanism of domination rather than an emancipatory force for subjects stripped of citizenship (refugees, displaced persons, political prisoners, immigrants, some Indigenous Peoples, etc.), promoting a liberal, homogenizing, and transnational ethics that goes against the principles of equality and difference (Santos 2012). 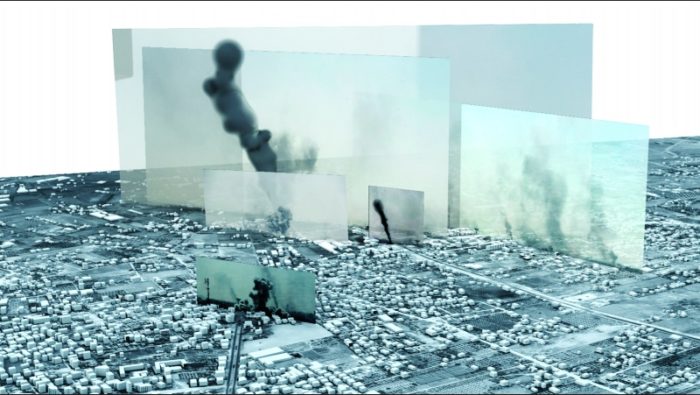 In this sense, it will be interesting to investigate whether “forensic architecture” will, in the future, also provide services to groups that are oppressed, excluded, and face discrimination but pursue social justice outside of the regulatory framework of NGOs and international organizations that monitor human rights violations, such as self-defense movements, popular fronts, autonomous indigenous communities, and separatist organizations that are fighting from the trenches without the economic resources needed to combat organized crime, transnational corporations, and structural and political violence. This would involve a different type of engagement from F.A. by dispensing with the information that NGOs provide them to carry out their work. Such an experience would require F.A. to rely on more ethnographic work and the eventual incorporation of social scientists into the agency.

Beyond the critique that can be made about F.A.’s place of enunciation—a concern that has occupied a significant portion of this essay—the importance of Forensic Architecture: Towards an Investigative Aesthetics as an exhibition derives from its use of the museum as a field and platform to visualize and understand a series of conflicts in the contemporary “theater of war.” As a place where geopolitics, people’s lives, war, aesthetics, art, culture, and the experience of surveillance and control intersect, Sergio González Rodríguez argues that the “theater of war” is one of the many fields that can be mapped onto the museum (González Rodríguez 2014).

If instead of defining “agency” as “the service authorized to act for others,” and instead as an assemblage «which is always collective, which brings into play within us and outside us populations, multiplicities, territories, becomings, affects, events» (Deleuze 1987), then the efforts of those involved in Forensic Architecture succeed in temporarily turning the museum into a (forensic) amphitheater from which they explain structural and political violence and the related mechanisms of power. «It is never filiations which are important, but alliances, alloys; these are not successions, lines of descent, but contagious, epidemics, the wind. Magicians are well aware of this. An animal is defined less by its genus, its species, its organs, and its functions, than by the assemblages into which it enters» (Deleuze 1987).

Ariadna Ramonetti. Licensed in History of Art by the Casa Lamm Culture Center (Mexico City, 2001-2005). Master in Art Studies by Universidad Iberoamericana (Mexico City, 2008-10), of which she has been a Teacher since 2012. Since 2005 she has been an independent curator, producer and manager of cultural projects.

1. Translator’s Note: This article has not been published in English, but the title can be translated as “White women seeking to save brown women.”

2. The “Global South” is a non-geographic “South;” it is a metaphor for the systemic suffering and inequality, in terms of class and social groups, produced by global capitalism, colonialism, and patriarchy. This “South” also exists in the “Global North” for oppressed and marginalized groups in Europe and North America, and by extension, there is also a “North” in the “South,” formed by local elites who benefit from global capitalism (Santos 2011).

3. The concept of “coloniality of power” calls for the invention/creation of new geocultural identities, material relations, and intersubjectivities of domination drawn from the imposition of race, a concept derived from the violent processes of conquest and colonization (Quijano 2000).

4. The “cases” developed by Forensic Architecture that are shown in the exhibition Forensic Architecture: Towards an Investigative Aesthetics are based in that non-geographic “South” located in Afghanistan, Brazil, Guatemala, Indonesia, Israel, the Mediterranean, Mexico, Pakistan, Palestine, Syria, Turkey.

6. If the reader is interested in seeing a list of the “cases” presented in the exhibition and media coverage of them to investigate whether the conflicts in question were resolved or not, I suggest searching on Google for the most recent news.

7. Epistemologies of the South are a call for new processes of production and valorization of scientific and non-scientific knowledges outside of Occidental thought. They call for new relationships between diverse types of knowledge from classes and social groups that have suffered from systemic oppression, destruction, and discrimination due to the inherent inequality of colonialism and capitalism. (Santos 2011). “The diversity of the world is infinite. It is a diversity that encompasses very distinct modes of being, thinking and feeling; ways of conceiving of time and the relations among human beings and between humans and non-humans, ways of facing the past and the future and of collectively organizing life, the production of goods and services, as well as leisure. This immensity of alternatives of life, conviviality, and interaction with the world is largely wasted because the theories and concepts developed in the global North and employed in the entire academic world do not identify such alternatives. When they do, they do not valorize them as being valid contributions towards constructing a better society.” (Santos 2011)