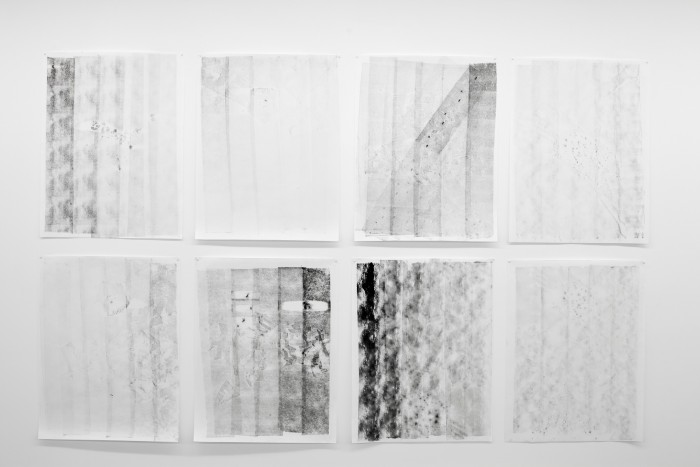 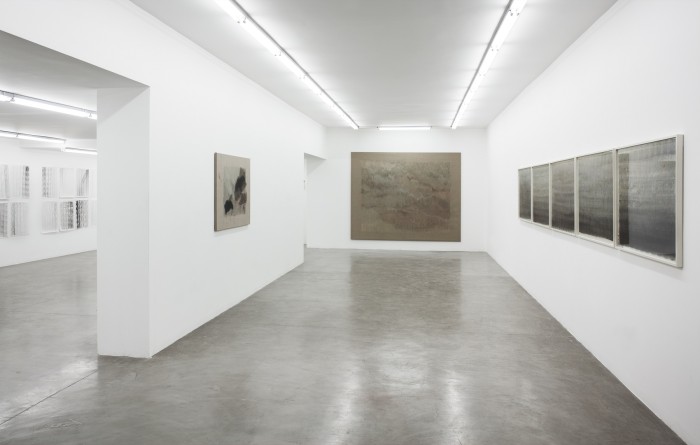 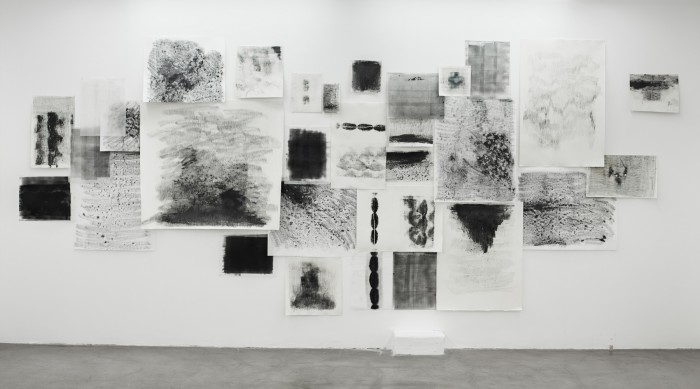 Elena Losón works in two clearly defined and neighboring territories: the surface of the canvas or of the paper and her studio. The material universe with which she moves into those territories is also limited, just graphite, pencil, and ink. Elena also foregoes color, making use of a subtle palette of shades of black and a finite collection of gray, light blue, and tan pencils. She has even relinquished the referential image that once inhabited her drawings and paintings. In these most recent works, there is no writing or recognizable sign, no figuration of anything with an idea prior to the line placed on the surface. Delving still deeper into a panorama riddled with restrictions, she makes use of basic, almost residual, exercises, elemental drawing with a line that comes and goes, and everything that is usually rendered at the edges of works of art or on surfaces discarded as superfluous. Against the grain of more “intentional” approaches to the creation of art where the physical and instrumental act is understood as the medium that conveys images and symbols, Elena engages in the more concrete and basic actions of her craft. For her, to paint or to draw has come to be the same as to clean paint rollers, to test and wear out pencils, or to smooth ink over a surface. Her image is her method.

Setting out to wander in this apparent desert, Elena has managed to caress infinity. Fumbling around in the knowledge that only repetition affords variation, only detachment provides release, her basic catalogue of tools has given shape to a series of actions whose creative capacity seems endless. Guided by this sort of studio archeology that, somewhat intuitively, came to form a project —the study of the space of her own remains, the space that she inhabits— she embarked on endless exploration of the appearance and disappearance of images, of the transformation of matter into image, of the negation of the principle according to which there is a hierarchical relationship between work surface, action, and finished image. There are many responses, in her work, to the question who activates whom.

If Elena’s initial concern was what to put on the canvas or paper or —as she says— “how the material goes beyond its nature, exceeds its dimension to move into the symbolic field of the image,” the result is a series of pieces where the exercise of working with what’s at hand —using a roller bathed in ink to trace the remains of material left under a piece of paper or repeating a simple act until the pencils are completely worn out or the stick of graphite breaks— reveals geographies, represents the space inhabited according to the natural and human forces that shape it. In its strict simplicity, her work brings forth voice and silence, vigor and exhaustion, transparency and opacity; it summons the vague area between the present and what we see, the endless nuances of the space between emptiness and fullness, between before and after the act of framing and of staining in all their intensities. Elena lifts up and leaves traces. Her drawings become mists, atmospheres that blur the horizon and gravity that provide us with order, juxtaposition of image and of act that renders everything not only figure, but also pure and deep background.