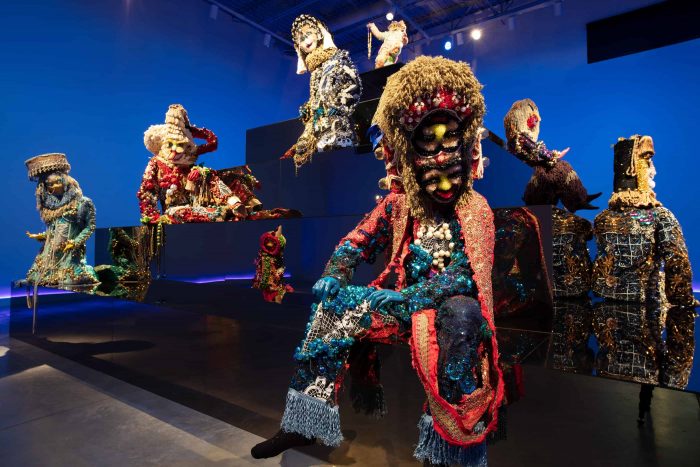 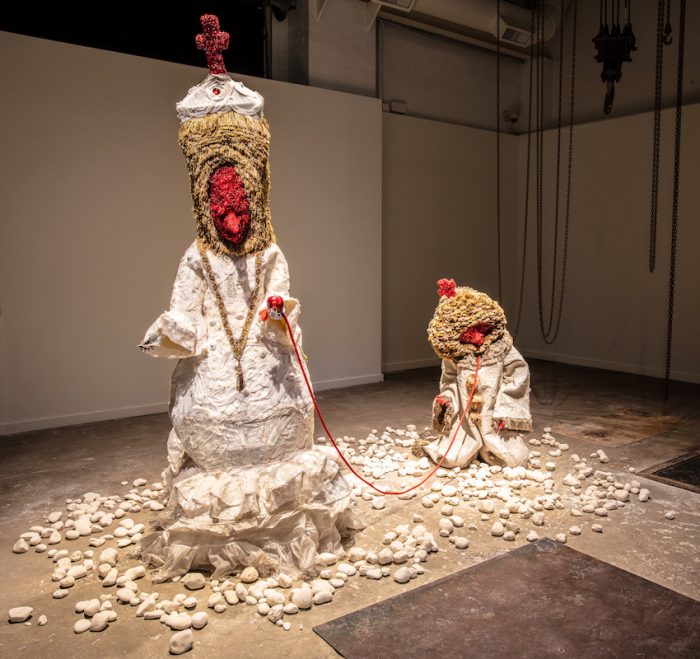 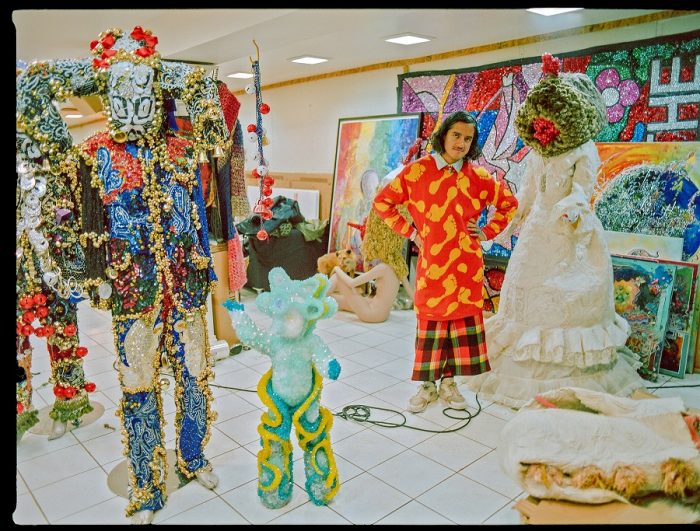 Fina is the first solo museum exhibition by Raúl de Nieves (b. 1983, Michoacán, Mexico). Through processes of accumulation and a celebration of excess, de Nieves transforms humble materials into spectacular objects and immersive narrative environments. Presented by the Cleveland Museum of Art at the Transformer Station, Fina features a new site-specific installation of figurative sculptures on a central mirrored structure in the Transformer Station’s main gallery. While this soaring space is illuminated with blue hues that conjure a cloudless daytime sky, the adjacent smaller gallery evokes nighttime as two figures seem to dramatically emerge from darkness. Narrative facets of Fina are informed by de Nieves’s experience of Mexican artistic and cultural traditions filtered through the lens of this moment in history.

“Raúl de Nieves has emerged as one of the most dynamic and celebrated artists of his generation, whose work exemplifies the global perspective of the CMA’s encyclopedic holdings,” said William Griswold, director of the Cleveland Museum of Art. “We are delighted to bring his work to Cleveland, offering visitors a thrilling immersive experience.”

De Nieves, who lives in New York, traces his artistic practice back to his childhood in Mexico: at school and alongside family members, he learned traditional Latin American sewing and beadwork that now permeate his art. He has vivid memories from that time relating to what he describes as “a lifestyle of making” in which basic material production was a part of his family’s everyday routine. At the age of nine, de Nieves immigrated to San Diego with his mother and two brothers. He considers his artistic practice a celebration of the values that are central to his family’s history: faith, perseverance, transformation and community. De Nieves honors this heritage by naming this show after his mother, Josefina.

“De Nieves mines personal and collective histories, recombining fragments of the past to create timeless fantastical worlds,” said Emily Liebert, associate curator of contemporary art. “Through a celebration of everyday materials and artisanal processes, his work suggests the potential for transformation.”

De Nieves has presented solo projects and performances at the Kitchen and the Watermill Center in New York (both 2017) and the Institute of Contemporary Art in Philadelphia (2016). He has also participated in major contemporary art surveys, including Documenta 14 (2018), Whitney Biennial (2017), and Greater New York (2015) at MoMA PS1. Currently his work is part of the Swiss Institute for Contemporary Art’s inaugural exhibition in its new building that opened in New York last summer. His project when I look in the Sun I see your eyes, produced by Art Production Fund and Bulgari, exhibited at Hotel Faena in Miami in December 2018.