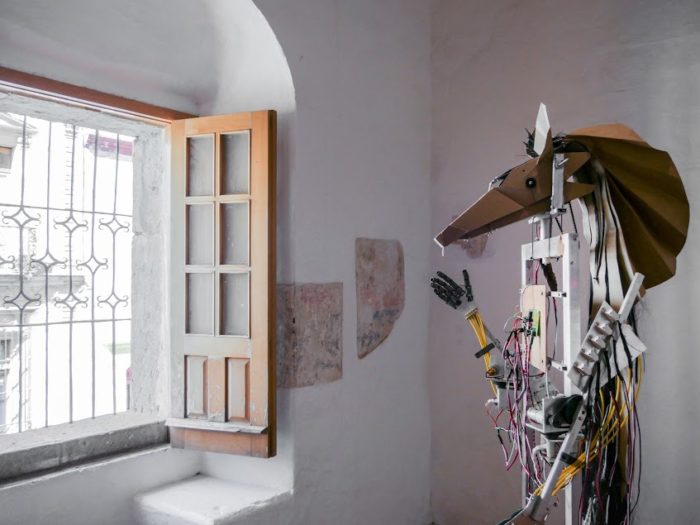 Fernando Palma distrusts humankind. Conversely, he trusts, in affection, animals, plants, and the gods…nature, earth, maize. Hence the exhibition unfolds like a long and complex landscape of various scenes set in the rooms of the museum. The installations are not ordered chronologically and respond to the different architectural conditions and the luminosity of each space—the museum occupies an old colonial building in downtown Oaxaca, far from any common notion of the white cube: exposed wood, ceramic floors, uneven walls, etc. This could reach beyond the installations of the exhibition, as they constantly refer to the colonial past and the old worlds. The artworks are nonetheless harmoniously embedded in this difficult frame, sometimes ignoring it and sometimes playing with it.

Many of the installations have been shown previously, and visitors who are familiar with Palma’s work will be able to enjoy them gathered here. Others had never been shown before because difficult technical resolutions hindered their achievement. By common agreement between the artist and Oliver Martínez Kandt, curator of the exhibition, these artworks are exposed in their unfinished, sometimes broken state, as if waiting for some kind of magic to come and animate them. This goes against the grain of the current contemporary art world, where artworks are commonly expected to be presented in a perfect state of achievement. The decision intends to resolve a frustration at the level of production, and matches both the career and the conceptual process of the artist, who has always seen technique and his own strained relationship with it as one of the central issues in his work. 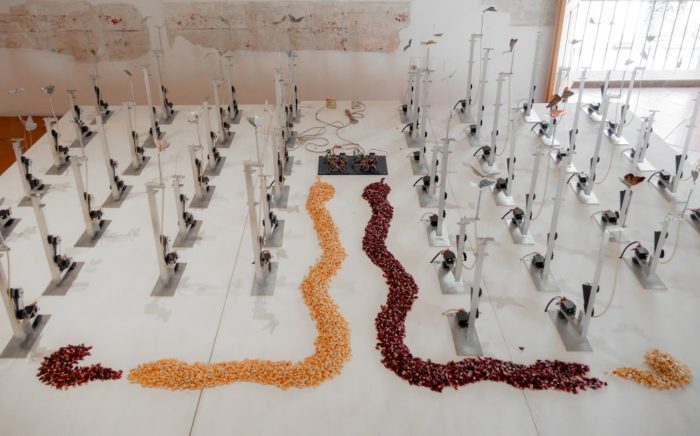 Fernando Palma’s work is inseparable from his identity, as he defines himself first as indigenous (indígena, the term for Mexican Native peoples), and secondly as Mexican. Fernando is Nahua, from Milpa Alta, located in the southern part of Mexico City. His life has been like that of many Mexicans of his generation, that is, a life of exile in search of uncertain employment possibilities. Even if in the ‘80s he migrated to Europe to study, remaining there until 2014, he resolved to return to his birthplace and defend its native culture. He not only defends it with art, he is also active in the Calpulli Tecalco civic association, which he manages with his mother, sister and other family members. We could therefore consider that although Palma did not constantly maintain his practice, he never completely dropped it either. Since his return to Mexico he has held several exhibitions in and outside the country, which also allowed him to resume several unfinished projects. In this sense, the Oaxaca exhibition, which features artworks that Palma resumed almost two years ago, is an excellent opportunity to seize the depth of a work that, due to several circumstances, had remained confidential, despite having been started more than 25 years ago.

The front part of the museum, facing the street, features those complex installations that were successfully completed, as well as new artworks combined with older installations. The first room is dedicated to water, an issue that worries Palma and features importantly in his current practice. The scarcity of this resource is indeed one of the main problems in Milpa Alta. At the left side of the room stands Acqua (2015), an installation of suspended guajes, a type of calabashes out of which he cut extended hands. Their opening movements recall the flutter of bird wings or butterflies. These “creatures” react to a motion detector, a system that is often used in the exhibition. The opening movement reveals an empty space in the guajes, which are traditionally used by indigenous people to contain water. To open the guaje is to release the water…an echo of Sisyphus. 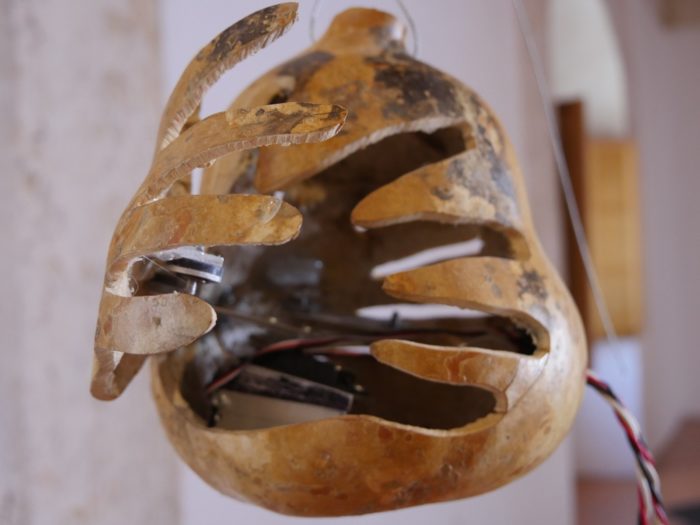 On the floor, heaps of soil form a landscape out of which several clay faces emerge, representing Cosiyo, the Zapotec god of rain and thunder. One of the aims of the exhibition is to mix Fernando’s native Nahua cosmogony with those from the Valleys of Oaxaca, where the recent works were produced (the pieces of clay are in this case a collaborative production with artist Lorena Ancona). The idea is to give shape to the plurality of the indigenous worlds of Mexico. This landscape features Los Nahuales (2017), microcephalic robots with metal heads and LED eyes, small plastic fingers and vegetal capes. The capes were made of palm leaves, a collaboration with a local 86-year-old craftsman, Señor Trinidad Matías. These same palm capes were formerly used by local peasants, before being substituted by disposable and polluting plastic capes. In Palma’s work, material details like this are a reflection about the disappearance of indigenous traditions, practices and everyday customs resulting from the imposition of oil-capitalism and plastic in the countryside.

In this way, the reflection on the toxic relationship we have with our environment is synthesized in the faint and sudden movements of the creatures represented in the exhibition, movements that allude both to the agony and resistance of nature. This can be perceived in Tocihua papalotzin (2018) an installation of monarch butterflies made out of old tin cans, and maybe even more impressively in Techpacita tlein quipano ipan Milpa Alta (2004), which is one of the last pieces of the exhibition. In this last, small room, a life-size horse made of plastic and various recovered materials agonizes on the floor, his flank pierced by an arrow. It intermittently raises its head or moves a limb, clinging to a life that seems to leave it slowly, but that its machine-aspect maintains. Clearly this alludes to the horse’s obsolescence in our modern societies, as it shifts from being a necessary tool to being a simple accessory for the rich, or, on the contrary, a help to the poorest, who cannot claim access to modern technologies of mechanization in agriculture or tourism. 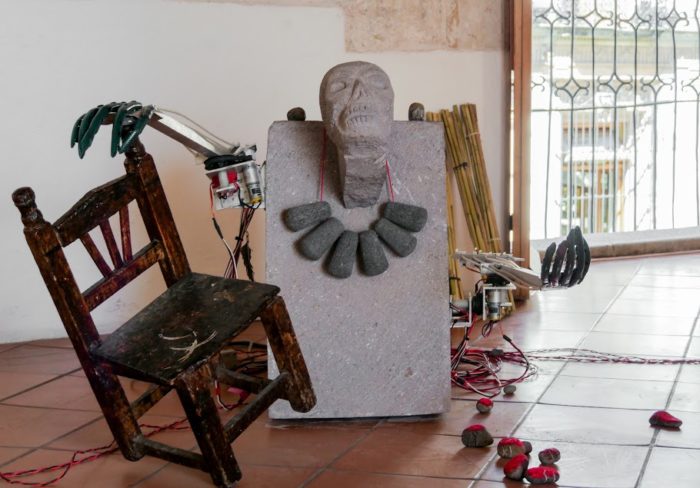 In the midst of so much desolation, the character of the coyote appears and reappears in sculptures, drawings and videos, both in its animal and human forms. The coyote (from the Nahuatl word coyotl) is also the alter ego of the artist, Fer-coyotl. It is a common symbol for both Mexican indigenous peoples and Native Americans; predator and furtive, less celebrated than its cousin the wolf, the coyote is present in a number of mythologies, both for its sense of humor as for its solitary mood and hunting skills. In Palma’s work, the coyote is the rebellious character who faces a world which has been destroyed at the hands of men. Through this character, the artist leaves his human essence for a moment, to come closer to a natural state. The video Si no fuera por estos momentos (2000), features transformed Fer-coyotl, shirtless and wearing a cardboard mask, roaming four emblematic places of Mexico City. He appears in Milpa Alta (Fernando’s birthplace and where until recently there were milpas, corn fields), Cuicuilco, the Santa Fe area (by then under construction) and Chimalhuacán, the name of which means “the place where the shields are kept,” and that used to be the Aztec army’s training site. The images, accompanied by heavy metal, show Fer-coyotl collecting objects and pieces of construction materials, shooting arrows…he reenacts a pre-urban, indigenous yet civilized life, which is disappearing permanently. In other rooms of the museum, the coyote masks are then turned into vanities which unfold through the works. Not all of these function perfectly, like Xi mo matlazacan ce cehce (2006), or Soldados (2001), underlining the feeling of doom that pervades the exhibition. 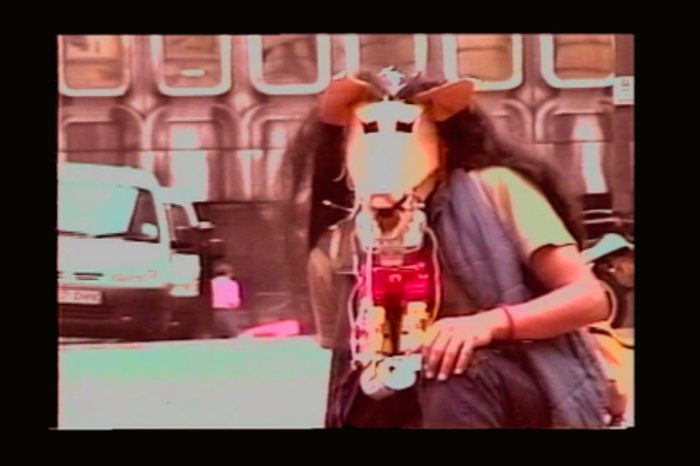 I cannot go into every artwork as I would like to, and it is a shame for there is a lot more to say, as one of the challenges of Palma’s practice is to inform the public about the multiple wisdoms and knowledges of the prehispanic world, that are still unknown to its contemporary descendants— considering that 70% of the Mexican population is mixed-blood with indigenous ancestry. The artist faces thus, as in the first work described, a task like Sisyphus’, that is to reestablish the prominence of an ancestral culture that was almost completely eradicated by colonization. It would nevertheless be wrong to believe that, as Palma’s work might seem to indicate, prehispanic society was idyllic and in perfect harmony with nature. Cortés was able to invade Tenochtitlán because of the historically established tyranny exerted by the Aztec people on the region’s tribes. Another example is the suspicion that the Mayas actually migrated from one place to another after totally spoiling the local waters and woods, only to come back centuries later. Palma’s nostalgic candor towards the indigenous world of the past could thus be the only really problematic aspect of the work. Because no civilization is perfect. Humans have never been able to live in complete harmony with their environment or with their brothers of the other tribes. This is a sad certainty, and more than the nostalgic landscape of the past, what is to be retained from Palma’s work is his reflexively implacable vision of the present, of how crooked and tragic everything is, and, of how, despite this, collateral beauty emerges from chaos and from the human destruction brought about on the planet, Guex Liu, Kuu ñunro, Totlalhuan, Nuestra tierra, Our land.

Dorothée Dupuis is a French curator, writer and editor who has been based in Mexico City since 2012. She is the founder and director of Terremoto magazine.