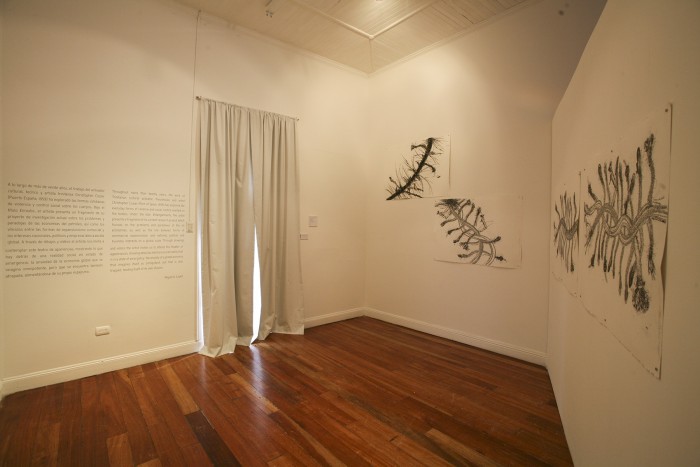 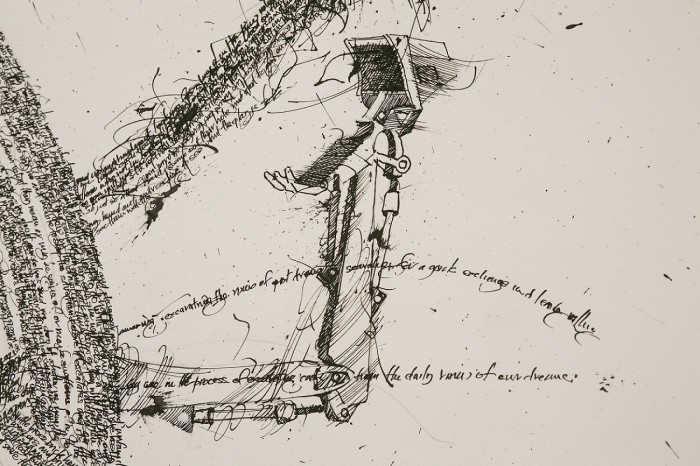 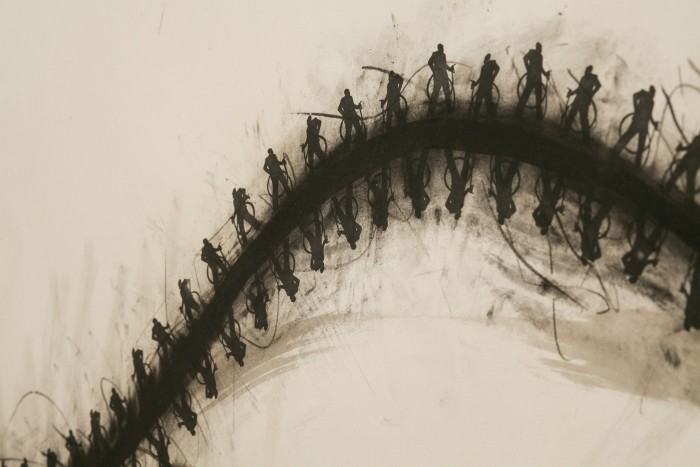 Throughout more than twenty years, the work of Trinitarian cultural activator, theoretician and artist Christopher Cozier (Port of Spain, 1959) has explored the everyday forms of violence and social control exerted on the bodies. From the beginning, his work has refused to be encased into consensual politics of post-colonial Caribbean multicultural representation, introducing interferences and short circuits that make explicit the colonial oppressive forms that persist in the region. Cozier has given particular attention to symbols of power and their changing uses, considering how the experience of black bodies (bodies racialized by the imperial-colonial project) can reorient spatial knowledge, history, economy, migration, and language. In his work, race, class and gender collide to confront asymmetrical power relations that have constituted us from colonialism.

This exhibition in TEOR/éTica is the first solo show by Christopher Cozier in Costa Rica, the result of a consolidated artist grant, given annually to showcase work by representative contemporary artists in the region. Under the tittle Enredos (Entanglements), the artist presents a fragment of his current research project, which focuses on the problems and paradoxes of the oil economies, as well as the link between forms of commercial expansionism and national, political and business interests on a global scale. The drawings and videos exhibited here are a continuation of two former exhibitions, entitled The Arrest, shown in Miami in 2013, and Gas Men, shown in 2014 at Françoise Heitsch gallery in Munich.

For The Arrest, Cozier produced a series of drawings of extremities of the body, normally arms, hands and feet that seem to be in permanent escape. The artist constructs these images through the accumulation of different written phrases taken from everyday speech. These are juxtaposed one over the other in a repetitive writing exercise. The phrases construct a thick weft, a labyrinth of words that remit to the incessant multiplication of tales about contemporary ways of violence, but also to the impossibility to give an account of and find answers in what we live daily. This free association writing procedure is a resource that Cozier pursues in his new drawings.

The title of that exhibition, The Arrest, alluded to the permanent condition of vigilance as well as the event itself of being seized and taken into custody, something to which all human beings are constantly exposed. Cozier pays attention to the body’s choreography, in particular to specific gestures. For example, the arms raised or down can be both an expression of disobedience or submission. “We are all in a state of detention. We are arrested by our social conditions,” Cozier points out. (1)

In Gas Men, the artist was investigating the sociocultural and environmental challenges of the new oil market, as well as its links to diverse military intervention processes, international conflicts and political manipulation. Even when the project takes the oil-based economy of Trinidad as a starting point, this reflection can be displaced to many other countries around the world. Using the same form of accumulative writing, Cozier draws a new series of images, in which the protagonists are creatures that crawl through the earth, like snakes or centipedes that appear, bite and hide quickly and with ease. The drawings are a metaphor for the state of fear and vulnerability we find ourselves in. The artist displaces into his drawing the daily sensation of being threatened and not knowing exactly what is attacking us and from where. The effects of this obscure violence are clearly manifested in the constant presence of corpses in the media –many of them black bodies– before which an important part of the world tends to remain indolent.

This exhibition in TEOR/éTica, Entanglements, presents new drawings in which Cozier continues with the investigation on organic and animal like structures that condense the unpredictable and elusive dimension of terror. It also includes two videos (Gas men and Globe) shown in his latest exhibition in Munich. In these videos two people in a business suit stand in front of a landscape with a menacing sky, doing different types of choreographies. Both characters manipulate, in the manner of a cowboy, hoses, gas pumps and petrol injectors as if they were guns or a cowboy’s lasso. The videos are projected in slow motion and in a slightly distorted manner, making the artificiality of the characters` gesture even more evident.

The exaggerated grandiloquence of the hoses movements ironizes the masculine spectacle of power, present in financial capitalism and global economic dynamics. Cozier uses the spaghetti western aesthetic to parody the macho competitiveness and heroism (associated with the aggressiveness of the economic transnational machines) that have also been established as a model for social relationships. The gestures appear in the videos as repetitive and empty acts, turning the fatuity of arrogance and its ostensible phallic authority movements into mere child`s play. The artist invites us to attend this theater of appearances, showing what lies behind a social reality that is in a state of emergency: the anxiety of a global economy that imagines itself as omnipotent, but that is also trapped, feeding itself of its own illusion.

Christopher Cozier (Port of Spain, 1959) is an artist and writer living and working in Trinidad. A 2013 Prince Claus Award laureate, he has participated in a number of contemporary art exhibitions in the Caribbean and internationally. Since 1989 he has published a range of essays in a number of catalogues and journals. He is co-director of Alice Yard.