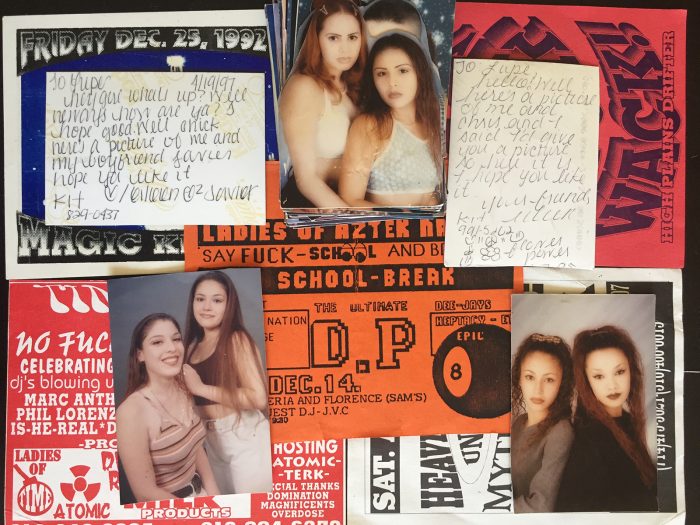 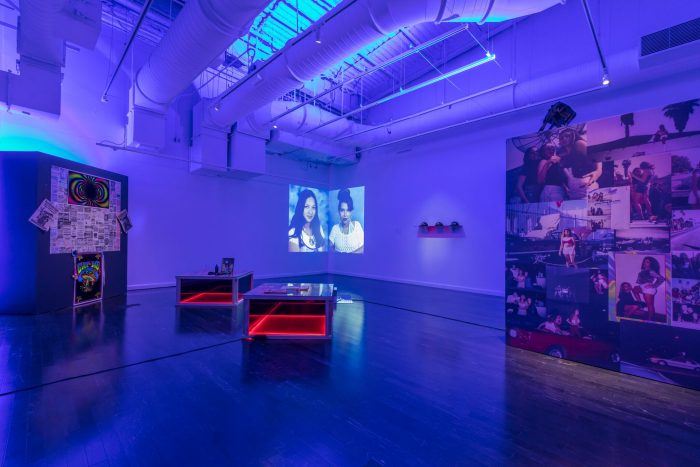 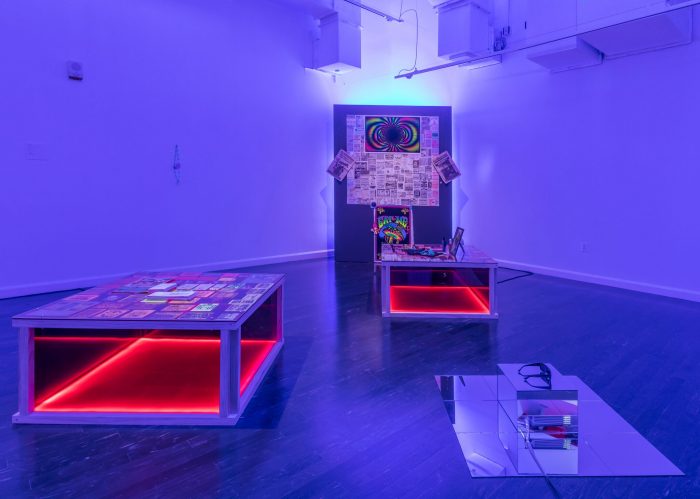 The Vincent Price Art Museum at East Los Angeles College presented Guadalupe Rosales: Echoes of a Collective Memory, the artist’s first solo museum exhibition. The exhibition explored the radical potential of the archive in a new immersive installation including a two-channel video, sculptures featuring archival materials, a collaged wall work, a payphone sound piece, and an altar honoring her cousin who passed away from gang violence. Guadalupe Rosales: Echoes of a Collective Memory investigated collective histories within Latinx youth culture in Los Angeles, reflecting everyday experiences in communities of color in the 1990s, from private spaces such as the teenage bedroom, to cruising, parties and other forms of socializing. Drawing on documentation, flyers, magazines, ephemera and objects from the period, Rosales activates memory through an environment that suggests both personal and group experiences. Within the exhibition, the artist affirms images and shared histories of young women of color, while pointing to recollection and remembrance as a collaborative, shared conversation. Working intersectionally across her own artistic practice and the discipline of digital humanities, Rosales upends power relations that are part of the historical process by creating a community-sourced online archive using the platforms of social media.

On Instagram, her account Veteranas and Rucas is dedicated to Latinas raised in Southern California, while Map Pointz focuses on youth active in the SoCal 90s party crew and rave scene. Through a reciprocal relationship with the public, Rosales shares the messages of those submitting to her accounts, and provides detailed information about the images provided by the contributor, such as identifying party crew members, acknowledging wedding anniversaries and birthdays, naming family members in the photos, as well as specific streets and neighborhoods where the images were taken. By presenting personal and family narratives alongside the images, her work engages in storytelling, as she implements a process of writing a different public history about Latinx youth culture across the region. “Teenagers, including myself, were creating unique spaces in the midst of gang violence, the 1992 L.A. Riots, and other racial injustices such as proposition 187,” said Rosales. “I began to understand my work as a personal and collective memory of that time. It is about unlearning/relearning/reexamining our history as youth in Southern California. It is also about honoring those who we’ve lost in time.” “Having previously worked with Guadalupe in a group exhibition, we are so excited to deepen our engagement with her work at the museum,“ said VPAM Director Pilar Tompkins Rivas. ”Her practice is extremely innovative, extending beyond the studio to intersect with processes of community building through collectively sourced archives, and bridging aspects of digital humanities and social media with contemporary art. She is committed to sharing the stories and experiences of young people, and that resonates deeply with our audiences.”

Guadalupe Rosales is an artist and archivist based in Los Angeles. She is founder and operator of Veteranas and Rucas and Map Pointz, digital archives accessible through Instagram. Her work has been featured in exhibitions at the Vincent Price Art Museum, Commonwealth & Council, Bemis Art Center (Omaha, Nebraska), and the Museum of Contemporary Art, North Miami. In 2016, Rosales took over The New Yorker’s social media for a week and was one of the top-rated takeovers of the year. Her subsequent role as the inaugural Instagram Artist in Residence at the Los Angeles County Museum of Art (LACMA) was featured in the Los Angeles Times, Artsy, and Artforum. She has lectured at numerous museums and academic institutions, including the University of California, Los Angeles (UCLA), Museum of Contemporary Art, Los Angeles, J. Paul Getty Museum, The New Museum of Contemporary Art (New York, NY), New York University (NYU), and The Graduate Center in New York, among others. She received an MFA from The School of the Art Institute of Chicago in 2016. Her forthcoming publication, Map Pointz: a collective memory, is set to release later this year. The publication is produced with Little Big Man Books and is designed by Stephen Serrato, Dante Carlos, and River Jukes-Hudson of Studio ELLA.

In addition to her solo museum exhibition at VPAM, her work will be featured in Guadalupe Rosales: legends never die, a collective  memory, an upcoming solo exhibition at the Apeture Foundation in New York.

The mission of the Vincent Price Art Museum at East Los Angeles College is to serve as a unique educational resource for the diverse audiences of the college and the community through the exhibition, interpretation, collection, and preservation of works in all media of the visual arts. VPAM provides an environment to encounter a range of aesthetic expressions that illuminate the depth and diversity of artwork produced by people of the world, both contemporary and past. By presenting thoughtful, innovative and culturally diverse exhibitions and by organizing cross-disciplinary programs on issues of historical, social, and cultural relevance, VPAM seeks to promote knowledge, inspire creative thinking, and deepen an understanding of and appreciation for the visual arts.