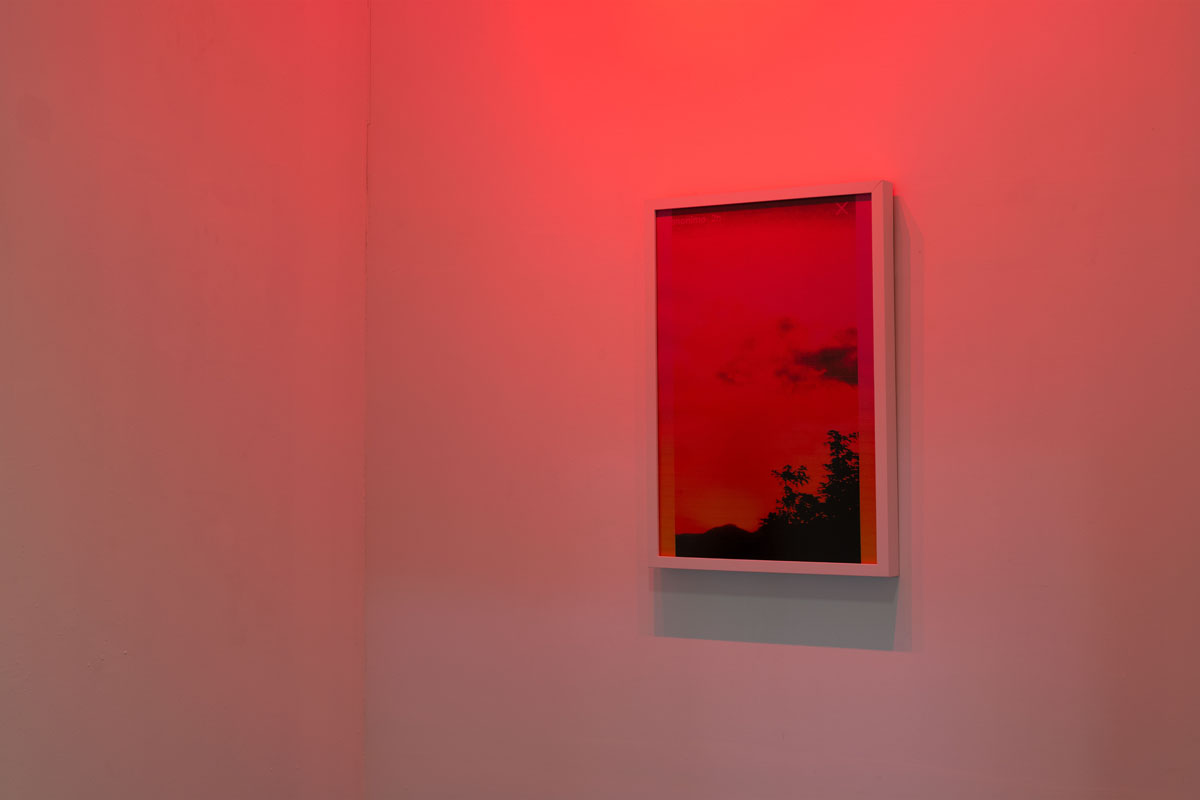 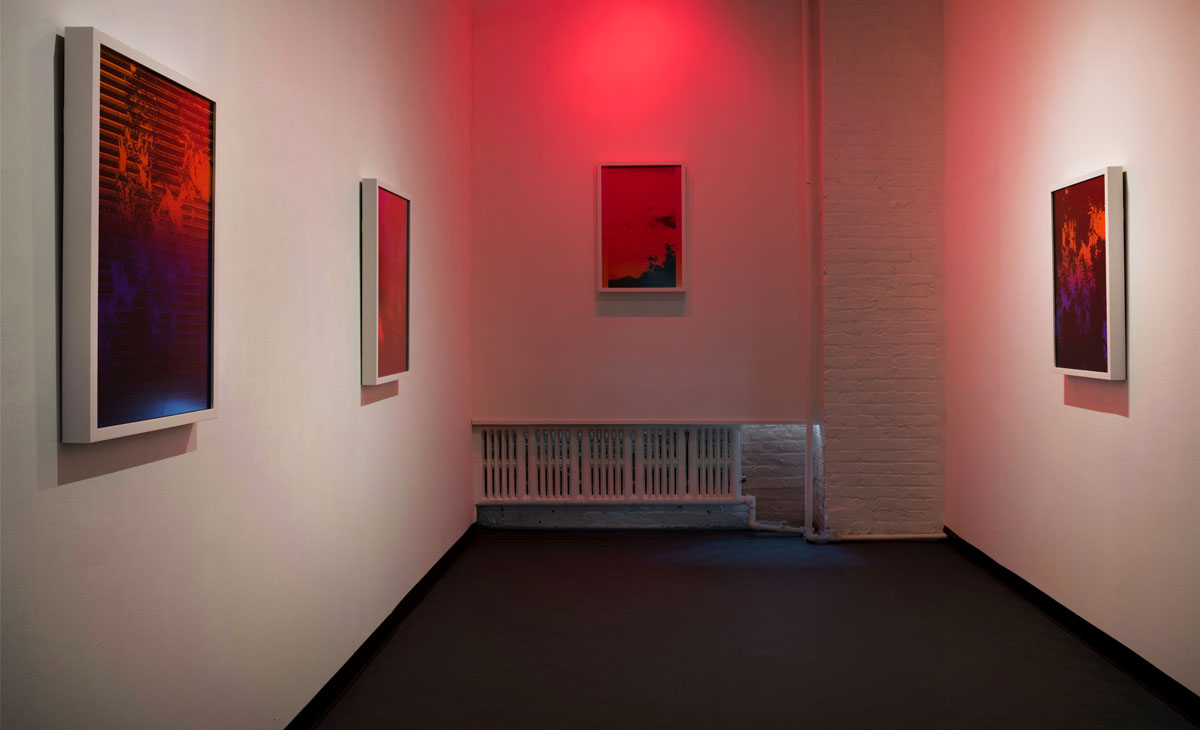 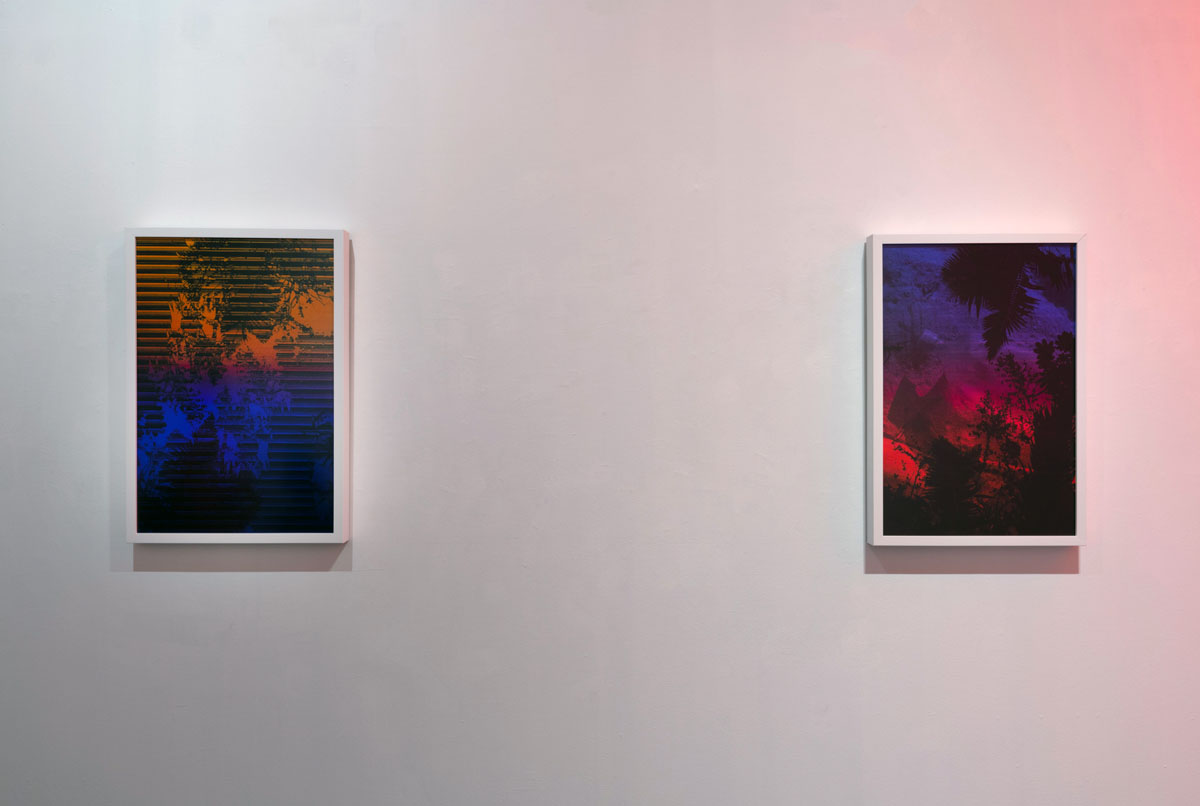 Yi Gallery is pleased to present an exhibition of new works by Lionel Cruet, on view from August 21 through September 19. With a photographic aspect, focusing on the ecological state of coastal spaces, Dusk/Daybreak is a series of experimental digital prints that capture daylight transitions using bi-tone pigmented gradations.

Working with audiovisual installations and digital prints, Cruet has cultivated a research-based interdisciplinary practice in the arts. His artwork and projects reference layered, postcolonial identities, ecological awareness and geopolitics of the Caribbean to imply connections among that region and other parts of the world. The new works in Dusk/Daybreak continue the artist’s investigation into these subjects. Confronting the bleak reality of marine debris that lay around the beaches where Cruet collects found objects, each artwork in this exhibition emerges from a photographic source—a log of a day on a coast, layered with fragmented screenshots from social media, as well as views of the sky and the sand.

Layering and composing images to add meaning to a larger narrative persistently interests Cruet. He builds and expands on former projects in an iterative practice. In 2017, at Everson Museum of Art, Cruet presented a project titled At the End of Daybreak, a hand painted mural depicting shaded tropical vegetation and an audiovisual projection onto a translucent life size cube. The installation evoked the time of “daybreak”. Moving images of an erupting volcano and a voice constantly reproduced against the narration of a section from the book Cahier d’un Retour au Pays Natal,1939 (Notebook of a Return to The Native Land) by Aimé Césaire, recalling an awakening, a rally and expressed metaphors with nature itself in the Caribbean postcolonial time. Additionally, the rich tradition of printmaking in Puerto Rico, which Cruet grew up with, has had a asting impact on his practice. In this new series, Dusk/Daybreak, the paper has been reprinted several times and colors bleed vertically, fading from one to the other, alluding to the light transitions of the day seen in the sky at dawn and dusk—the perceived daily division of time—while revealing intimate details captured through his photographic sources. Symbolically, the change in day and night offers the most dramatic contrast between light and darkness, between consciousness and unconsciousness, the seen and the unseen and has a biological effect in the environment, as well on mankind. Each work in this exhibition connects an intricate system of relationships among its subjects, symbols, visual elements and the depicted time and space.

Lionel Cruet lives and works in New York City and San Juan, Puerto Rico. Cruet received a Bachelor in Fine Arts from La Escuela de Artes Plásticas en Puerto Rico and a Master in Fine Arts from CUNY – The City College of New York, and Masters in Education from College of Saint Rose. He was the recipient of the Juan Downey Audiovisual Award in 2013 at the 11th Media Arts Biennale at the National Museum of Fine Arts in Santiago, Chile. Cruet uses multiple mediums including experimental digital printing processes, performance, and audiovisual installations to confront issues that concern ecology, geopolitics, and technology. Cruet’s artworks have been included in exhibitions at the Bronx Museum of the Arts (2017); Everson Museum of Art, Syracuse (2017); Museo del Barrio, New York (2013), Museo de Arte Contemporáneo de Puerto Rico (2013); and Universidad de Sagrado Corazón, Puerto Rico (2014); and a solo exhibition at the Bronx River Art Center (2015) and have been reviewed Made in Mind Magazine, designboom, Daily Serving California College of the Arts, and Latinx Spaces. Cruet works with the New York City Department of Education, as well as multiple nonprofits that promote art and aesthetic education for immigrant youth.