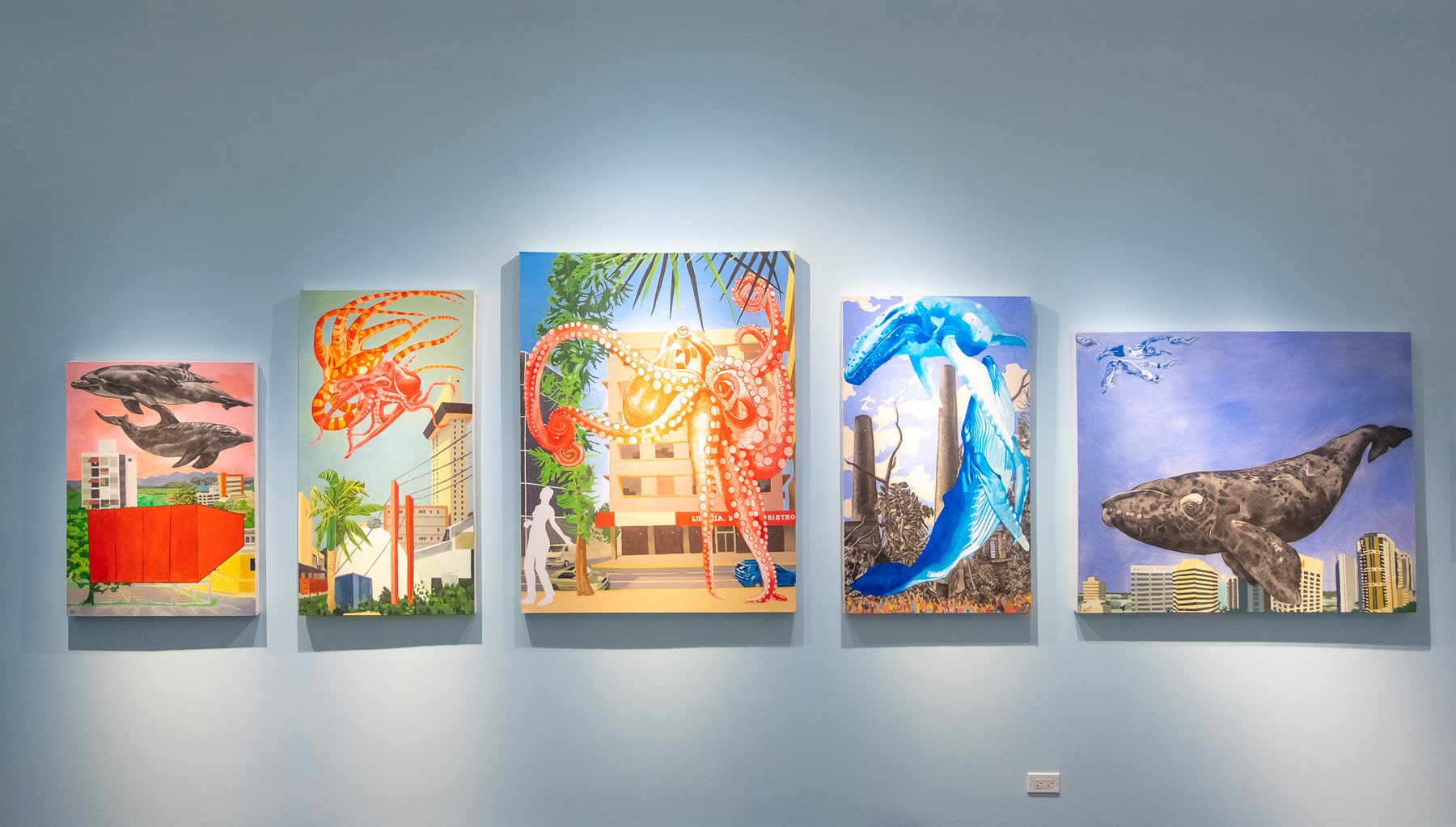 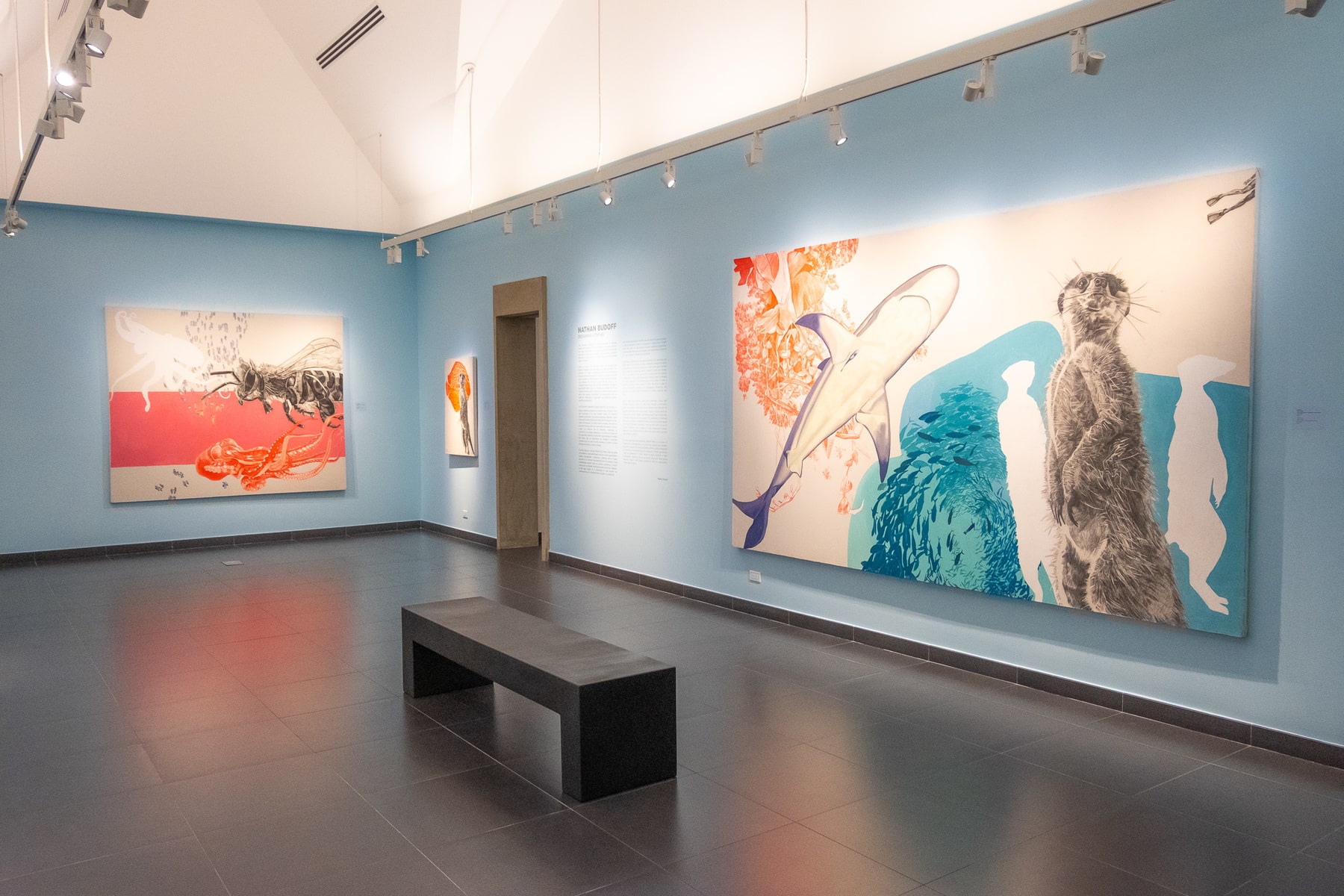 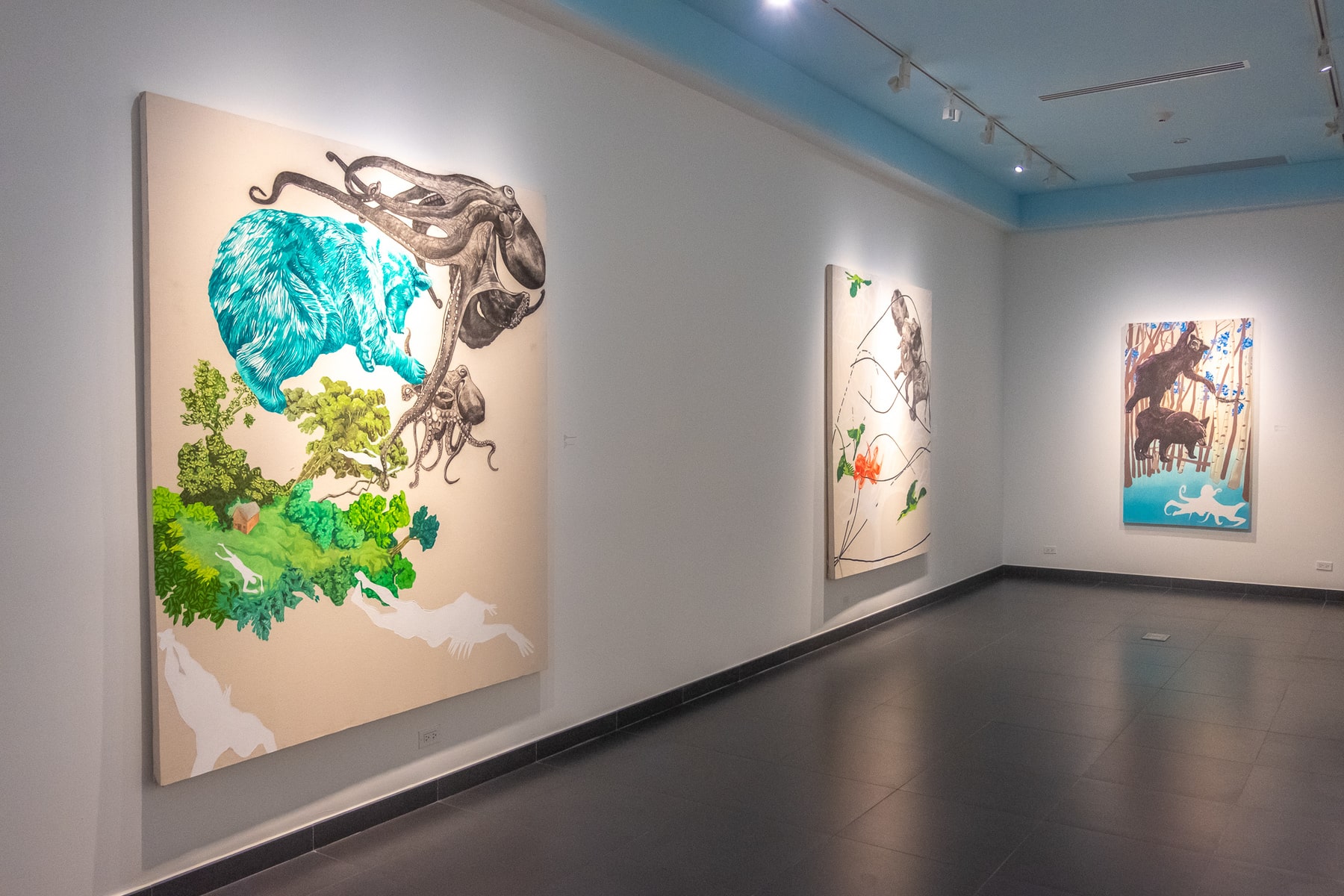 We need another and a wiser and perhaps a more mystical sense of animals. . . . For the animal shall not be measured by man. In a world older and more complex than ours, they move finished and complete, gifted with extensions of the senses we have lost or never attained, living by voices we shall never hear. They are not brethren, they are not underlings; they are other nations, caught with ourselves in the net of life and time, fellow prisoners of the splendour and travails of the earth.

With Designing Utopias, MADMi presents the first solo exhibition of Nathan Budoff’s work at a museum in Puerto Rico, an event we consider long overdue. In this show, Budoff offers the public an opportunity to see a selection of paintings and drawings that propose fantastic and harmonious scenarios at a very relevant moment for the planet.

The title of the exhibition refers to Thomas More’s 16th-century novel Utopia, in which, on an ideal island, society coexists peacefully and in a general state of happiness. Ironically, while the book has been interpreted as representing an ideal place, More was intentionally writing fiction. In his view, humans are inevitably, inherently unable to forge such a society. More’s title, in fact,r eferences the original meaning of the word “utopia”—“nowhere.”

More was writing about societal evils that he perceived, and he provided a fictional alternative in the Utopia he imagined, creating a literary and visual genre that has been explored, experimented with, and reinterpreted by many artists, from More to Rudyard Kipling and from Hieronymus Bosch to Nathan Budoff.

Throughout the history of Western art, animals have been depicted in paintings mostly as moralistic or symbolic props—from eloquent parrots to sexualized rabbits and monarchical bees—but rarely as protagonists. Nathan Budoff is an exception to this canon; he seems to follow more in the footsteps of French näif painter Henri Rousseau and Mexican artist Frida Kahlo.

Budoff has constantly incorporated animals in his paintings and other works. His animals are free, intelligent, resourceful, active participants, to the point that in this most recent work, humans might even be completely absent. Budoff’s works are vibrant, not only because of the saturation of colors and the physical juxtapositions, but in the impossible scenarios that he designs for these creatures. The paintings are mainly large in scale, a format that lends ample space in which the artist is able to create far-fetched scenarios of interspecies interaction that provide the viewer with a showcase of beauty, balance, and hope.

Sharks share the pictorial space with meerkats, octopi walk through Santurce, tigers fly with owls through a metropolis, bears fly, elephants defy gravity, and whales swim through the skyline of Hato Rey’s financial district. Some of these works do incorporate human figures, but these figures feel mostly like secondary characters or even extras, and we never see their faces, so they also feel like generic versions or theatrical props. The aesthetics of Médiéval bestiaries, Surrealism, Japanese manga, and comic books merge into Budoff’s fantastic scenarios, imbuing them with a sense of humor combined with a respect for and intellectual curiosity about the lives of these animals, which the artist clearly admires and wishes to protect.

To be human is to live in contradiction to our evolutionary nature, which clearly places us among the animals and not in an elevated world of Others. We maintain that we are the most highly developed species, but we are mammals nonetheless. As a result, we are living in an age in which humans do great harm to the planet and the animals that inhabit it precisely because we insist on our Otherness, ownership, and superiority and behave as if the claims we hold over the Earth supersede any accountability. Nathan Budoff’s paintings subtly remind us that humanity has chosen to largely ignore the intelligence and empathy that other creatures possess; we have done so partly out of ignorance, but mostly out of arrogance and disregard, since such an acknowledgment would require us to change our behaviors.

Herein lies the genius of Budoff’s works: We clearly get the message he is trying to convey and are awed by his pictorial proposals, in which he celebrates the complexities of these exuberant animals and brings them to the forefront and into “our” spaces. In these paintings and drawings, Budoff offers us an array of magnificent improbabilities, for which we suspend our disbelief and wish—dream—for their possibility within a utopia unpolluted by humans, an outcome many of us long for. These possibilities may be Surrealistic in their nature or even mystical in their celebratory vibrancy, but as we know, one sure thing about Nature is that it will always surprise us with its adaptability, power, and wisdom.