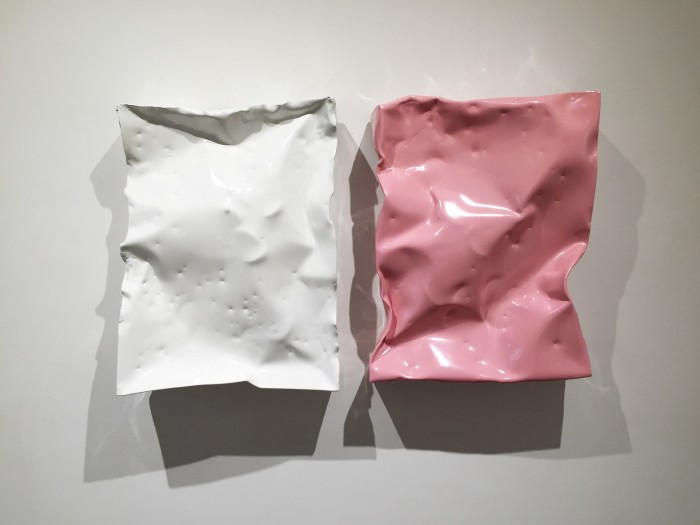 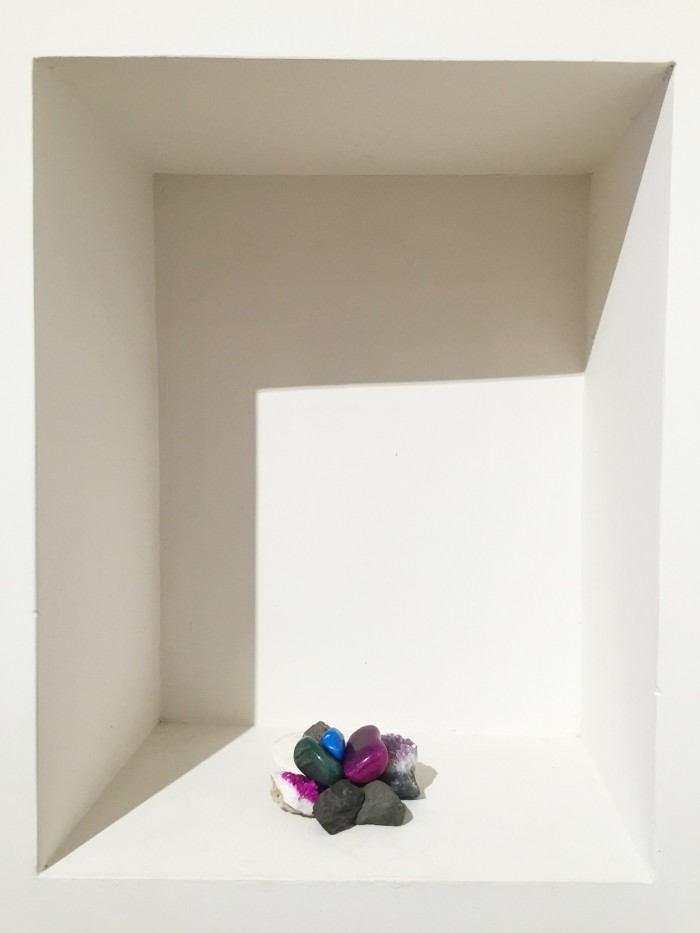 The world around us is made up of elements that at first glance we do not recognise; microscopic structures in motion that are constantly intersecting, contradicting or combining their energy. The work of Irish artist Keef Winter reminds us of the intimate constitution of objects, how these are the result of several processes and how everything around us is related. His pieces contain elements manufactured from industrial processes, as well as common construction tools. Placed together the works reveal a communication between themselves; their size, colour and origin.

For the artist, this manufacturing space suggests a making process informed by limitations that shape the work. The studio door size, internal van dimensions, the size of suitcases in transport and finally the gallery space, are volumes that interact with the final forms. From this, Winter developed the concept ‘Handyman Aesthetic’, a material language that explores and describes these operating modes, the peculiarities and the sculptors own vernacular issues that come to set in motion the work between the city, the workshop and exhibition space.

Deep Inside is the artist’s first solo exhibition in Mexico at Galería Breve. The works are created using powder-coated steel, timber, a photograph and a selection of small stones.

— High Street Girls — In these works, steel sheets are folded and welded to be converted into boxes. The dimensions of these boxes are based on variations of the golden section, the harmonic ratio of different measures and the mathematical radius that is present in everything that surrounds us. In High Street Girls the artist again hammers the boxes, where a paradox is evident between destruction and re-construction; as hitting with the hammer and destroying the angular corners of the steel gives rise to accident and therefore creates a new organisation of forms.

— Deep Inside — This piece takes the form of a live act on the opening night. Again, the artist applies hammering to a steel box. Deep Inside is a sample within the track (made by the artist’s musical act Handyman) that gives the name to the piece and the show. Winter doses adjusted blows to the steel based on the rhythm of the music. After this action of hammering, the piece is covered with a layer of powder-coated paint. The result resembles the form of gift wrappers in colour and finish glossing over the prior aggression that has become these objects. The artist’s male energy is contained within a layer of colour that denotes a particular femininity. With this action Winter opens the door and invites the public to be spectators of the process briefly converting the exhibition space into a workshop.

— On the rocks — Finally a collection of rocks collected from various sites are presented, including some from a site in Northern Ireland called the ‘Giant’s Causeway’. This place is covered by thousands of basalt columns which were formed by volcanic activity. The stones have gathered a hexagonal shape naturally. Beyond the formal matter, the artist is interested in these items due to the symbolic stories, embodied energy and mysticism that they carry since ancient times.

Cracks caused by shocks generated by erosion shapes, giant molecular structures, layers of painted envelopes. Clearly the artist’s intention is to affect the raw material; be it as a live act, the creation of an object, the writing of a song, the telling of stories under the surface. We can say that the work of Keef Winter contains a soundtrack that is not enough to only hear but to also know that it is there; a particular energy buried deep inside the material, present in each of the parts.