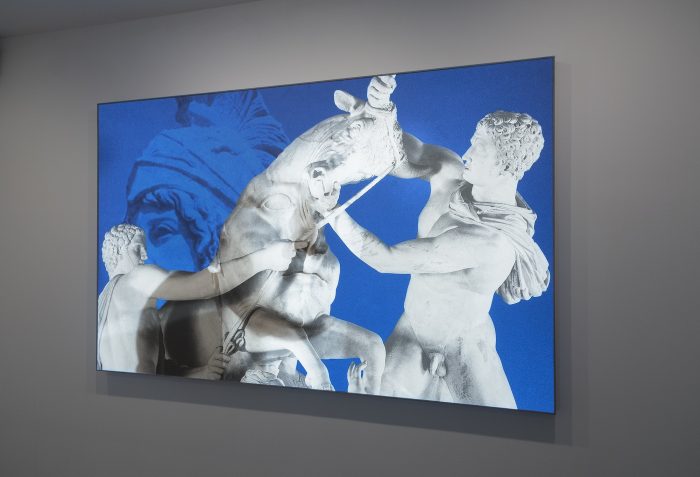 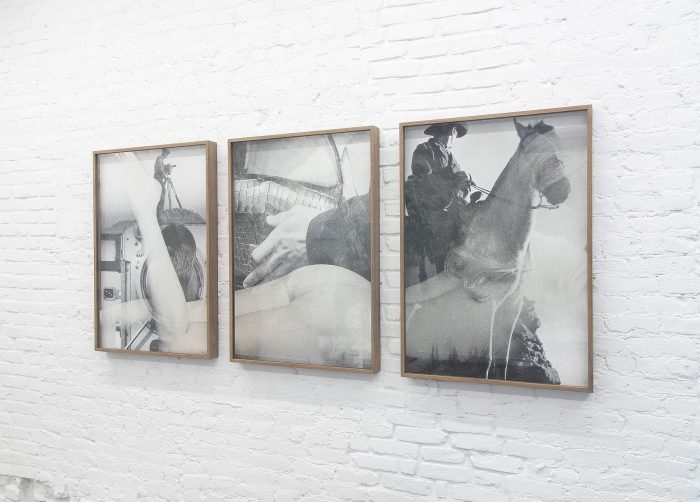 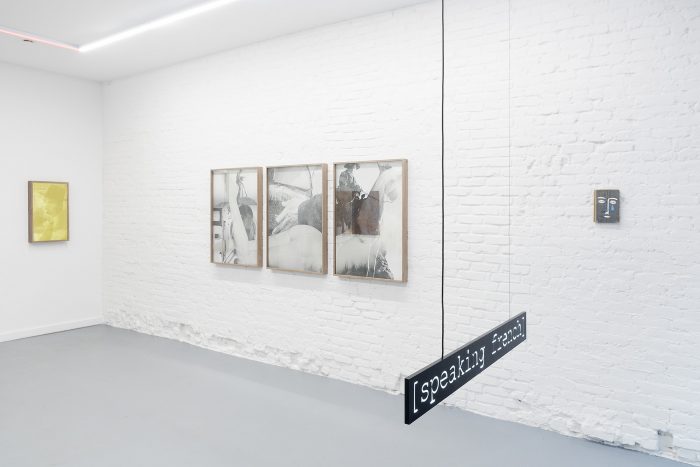 “I have always wanted basically, to carry out
investigations in the form of spectacle.”
—Jean-Luc Godard

The work of Javier M. Rodríguez focuses on questioning the formats and uses of the audiovisual apparatus, often borrowing content from narrative films to highlight the conventions and constructions of the cinematographic device. For this exhibition, the artist creates a body of work pulling from the film The Contempt (Le Mepris, 1963) by Jean-Luc Godard. In an almost archival exercise, the artist creates his works referencing directly or indirectly to the film, thus creating a game of allusions to literature, cinema and the visual arts. This transfer of information is apparent in the title of the show, Darkness at Noon, as in the titles of the pieces and arrangement of the artworks in the space of the gallery.

In Totally, tenderly, tragically (2019), the artist creates a tryptic of double prints. The first prints are fragments of directors´ films that have influenced Godard over his career. On the glass that protects the work, a silkscreen print with a frame from Contempt of Brigitte Bardot unfolds, fragmented, over the three pieces. The fragmentation of images in a single work not only creates multiple layers and readings, but also refers to a basic cinematographic construction in which a first image is determined by the sequence of images that precedes it.

This layered exercise is also visible in Godard´s work, with endless references that frame and permeate his narrative, constantly reminding us that there is an inside and an outside of the fiction we are observing; this is also a recurring resource in the making of French New Wave films. Establishing a link with this technique, Javier M. Rodríguez creates Last Year at Capri (2019), an installation that superimposes scenes from three different films that use audiovisual documentation of classical sculptures Journey to Italy (1954), by Roberto Rossellini, Last year at Marienbad (1961) by Alain Resnais, and The Contempt (1963) by Jean-Luc Godard. In a gesture that brings us back to the visual arts, the piece establishes a dialogue between photography, sculpture and cinema, advocating for the materiality of the audiovisual apparatus as both support and purpose.