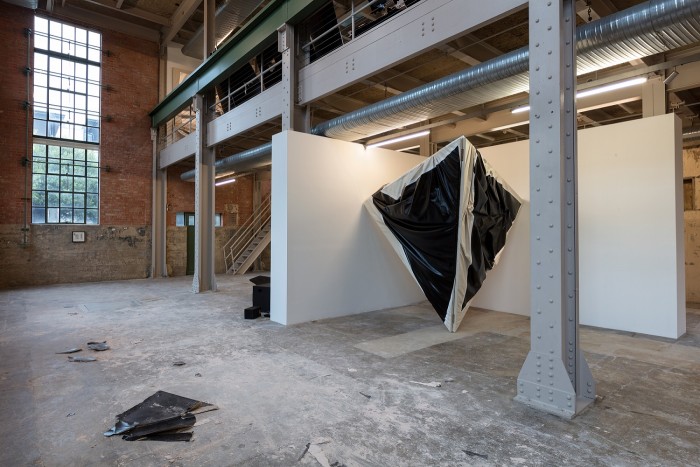 The romance of death is strewn across the Power Station’s floors like poetry. Steven Parrino has finally been given the American survey he deserved, Dancing on Graves at The Power Station in Dallas, Texas. This is the first institutional show for Parrino in the United States, located in an old Dallas Power & Light substation, spanning work made from 1979 to 2004 through painting, works on paper, sculpture, and video. Albeit, the show comes 12 years after he died; riding his own pale horse on New Year’s morning, a motorcycle accident on slippery roads hurdled him towards mortality in 2005 at age 46.

If alive today, Parrino would be shocked by none of this new found fame. His work dealt with the comedy of death: his own, his friend’s, of painting. He explored these possibilities by creating large-scale paintings thwarting expectations and academic assumptions on what a painting should look like, be about, and do. 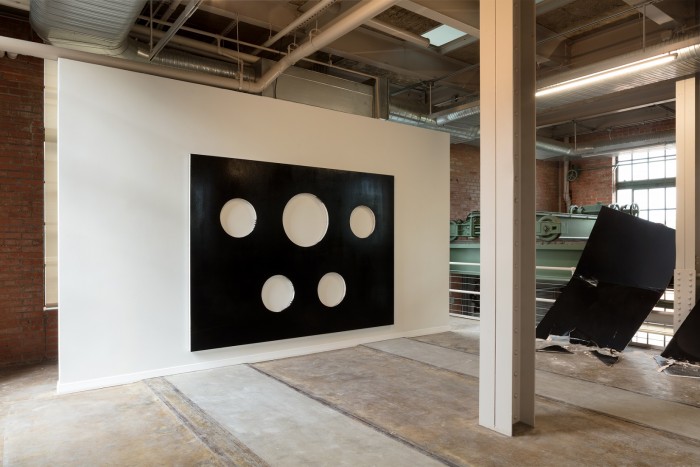 Through his work, Parrino was killing his idols, and the canon he was working within, in order for it to evolve further. His work was a dark reflection of minimalism and the monochromatic palette which came before. Parrino’s work treaded theoretically somewhere between Andy Warhol, Yves Klein and the Hells Angels.

He attacked flatness with large geometric shaped pieces, like Untitled from 2004, which the Power Station puts on display on the first floor. Here, Parrino has created an inverted pyramid, at once an enhancing and reductive exercise on size and scale of painting. The cold hard walls and floor of the Power Station become the meeting points for three out of the piece’s four angles, with the fourth reaching towards the heavens. The black and grey painted canvas is stretched and wrinkled around the triangular shape of the frame, a body bag of sorts for a practice thought dead when Parrino began painting.

Parrino’s career as a noise musician serves as an ancillary access point to his theories on the condition of man and country. The noise he created with Blood Necklace and collaborations with visual artist, Jutta Koether were homogeneous to his visual output. They were different distillations of the same ennui, exhausting rage towards form and precedent: Parrino’s own artistic language full of barks and beatings. Parrino was blurring the lines between contemporary art and experimental music before it became the passé of every undergrad Liberal Arts major. 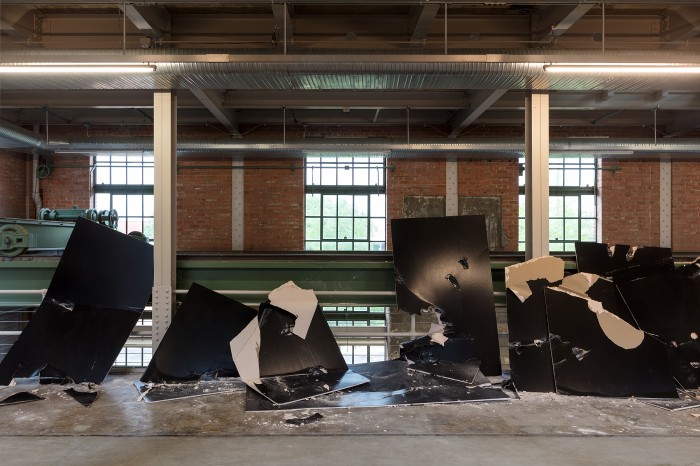 This can be empathized with his eulogy for a friend, 13 Shattered Panels (for Joey Ramone) from 2001. Observing the institution’s Instagram account, one can see Power Station manager, Gregory Ruppe and Italian conceptual artist, Piero Golia (who was in town for the Dallas Art Fair) took turns bashing in the black enamel paintings with a baseball bat. Post-mortem, the paintings sit upright, side-by-side, sometimes stacked, on the second floor of the museum. Shards and materials lie like body parts on the battlefield. The debris on the floor serves a similar role as the poetry device known as a, “pillow word” (a phrase to denote a break) or the filmmaking device, “pillow shots” (a cut to a street lamp or sunset after an intense bit of dialogue). These linguistic and aesthetic narrative functions are meant as pauses for mediation, breaks between action that allow for the viewer to reflect on what they just saw. They are usually situated between “what was” and “what will be” within the story. The scrapes of mutilated panel, sometimes met with such violence it returns to it’s origins of dust and sand, serve as “pillow markings”, moments of pause for us to not focus on gestures, but instead contemplate our own complicity in the violence of society and the self.

3 Units of Aluminum Death Shifter, from 1992, hangs on the second floor as a direct descendent of John Chamberlin, if the artist had toyed with bed sheets. It brings to mind the language used in mobster and action films about bringing upon your own demise (“You’ve made your bed, now lie in it”). It’s hyper-masculine prose, that when contrasted by Parrino’s choice of materials, it gives way to a textured reading of where his practice fits: between the abstraction that came before him and the fatalism of the early 2000’s era, one of Vice-inspired New York mixed-media artists. The enamel on canvas work gives us the scene of three crimes, or at least that’s one interpretation. The three aluminum-colored shapes outline the stains of human forms. The folds and creases on this piece are harsh and unforgiving, crushed into the canvas with ferocity, or perhaps made to appear so. The abnegation is palpable, nonetheless. At once, Parrino is rejecting everything and nothing within the field of painting. 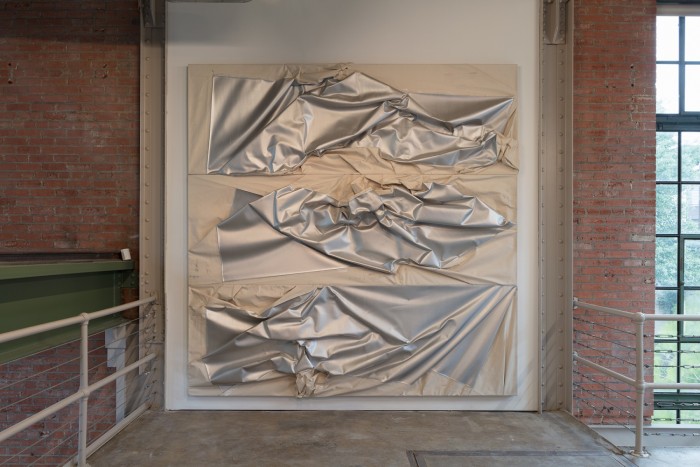 The Power Station lends embellishment of Parrino’s mythos itself, by sheer name and structure. Its large industrial architecture makes the painting’s nihilism echo throughout its floors. It could easily be the site of a 1980’s (or current) noise show, a scenario that occurs through the show’s own entropy, by way of the installation, Dancing on Graves (1999), the five-minute video for which the show takes it’s title. A small monitor sits next to two small speakers, and three broken and combined black panels. The video piece is an amalgam of sex and dread. From the grainy footage we see a woman gazing back at us, dancing on similar materials while teasing, perhaps taunting us. Noise blisters out of the speakers, calling us from the grave. We then see Parrino providing punishment upon his works, then blackness, followed by absence. It seems through his experiments in noise, Parrino found silence can be annihilating.

Lee Escobedo is a Dallas-based critic, curator, and artist. His work can be found in Berlin Art Link, ArtDesk, Glasstire, and The Dallas Morning News. He was the 2017 Artist Circle co-programmer at The Nasher Sculpture Center and has been invited to program or curate by The Fort Worth Modern Museum of Art, The Dallas Art Fair, and Southern Methodist University.