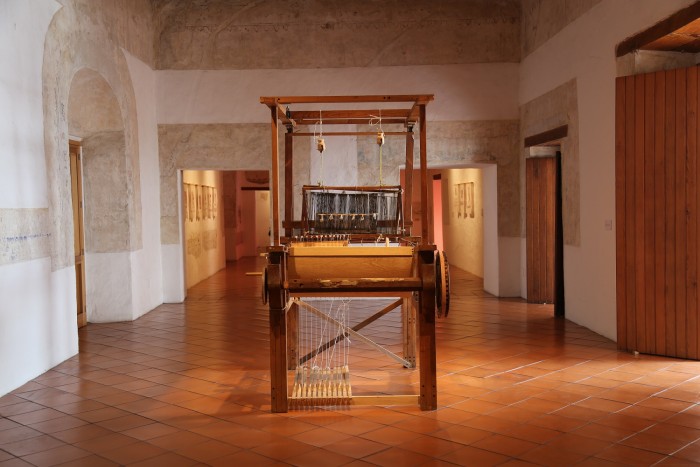 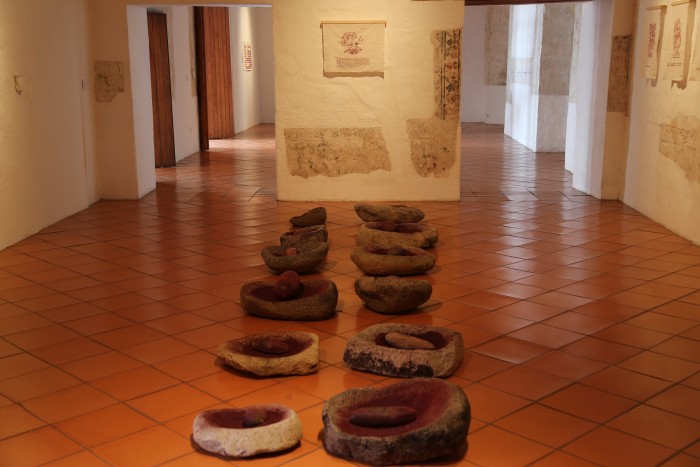 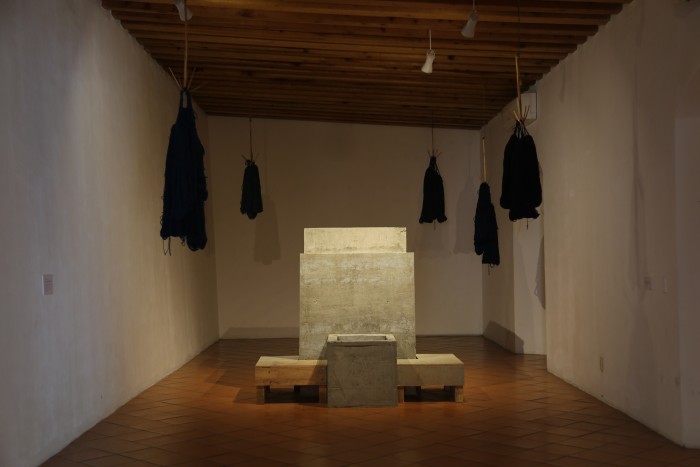 From the positivist presumption of the existence of a system of absolute knowledge and truth to the models of Cartesian order that only allowed readings in one particular direction, the majority of models of epistemological organization reflect an obsession with directionality that turns out to be somewhat contradictory, depending on the quantity and variety of studies attempted to be covered.

Starting with the search for other ways of articulating thinking, Tania Candiani has developed a specific project for the Museum of Contemporary Art in Oaxaca, a region known for the preservation of diverse craft-work traditions which the artist takes as a point of departure for establishing the different relationships and organisational models of sensory associations.

Ancestral traditions, such as textiles or ceramics, are presented in the project, however, three colors in particular, are taken as a point of departure and, at the same time, connect us with the three great kingdoms of nature. The animal kingdom comes from the red tone that is cultivated in the form of cochineal, the vegetable kingdom comes from indigo blue, and the mineral kingdom, from pigments that are used to make yellow. These three axis open up a whole range of disciplines from bridges that establish links between technology, understanding and thinking through a complex web of points that form symbolic networks of rhizomatic structures.

The recovery of this type of tradition is important as a vehicle to preserve the memory. On the other hand, on a neurological plane, the associations we produce in our brains don’t work in a linear manner, but are usually more personal, hidden or based on sensations that mutate and merge with each other. In this way, the backdrop consists of applying the archaeology of knowledge to develop an exhibition which questions the logical treatment and the cross-over between disparate mediums that speak of other possible links in management of knowledge and memory.

The show develops through ten rooms and a courtyard, and allows the observer to encounter one of the installations from the outside, in a clear view from the main street. The rooms are set out on the basis of the three colors mentioned, so we find a couple of the areas dedicated, exclusively, to red and blue, and a large space for yellow, the rest is taken up with the development of the general concepts about the three colors all together.

At the start of the tour the public will find a room illustrating the overall approach from a chart outlining the proposed system and which a weaver from Teotitlán del Valle will be weaving on a rug on a large loom of three meters, over the period of the exhibition.

The following space centres around music and synesthesia, two of the main concepts that are explored. Continuing the analysis of the correlations between these two ideas, various works revolve around a key piece inside the project. A loom transformed into a musical instrument.

From here, we move into the red rooms where a body of work that ranges from embroidery of  cochineal picking, based on the illustrations of the book by José Antonio Alzate in 1794, Benefits of Cochineal, to video, sculpture and installation. These rooms also allow us to make out the installation in the red-walled courtyard from the windows, constisting of tables of nopal cacti with cochineal, from its sprouting and at different stages of growth.

The blue rooms also show part of the process of producing indigo blue through utilization of the piles of yarn used for its production and through a device for weaving that accompanies the different shades of blue hung from carved branches in the form of hangers, commonly known as ‘garabatos’.

The relation of mineral pigments to sound is the essence of the yellow room through a sound piece made from ceramic ocarinas in up to sixteen shades of yellow, in the shape of birds of different sizes, which determine the resulting different tones.

The tour culminates with another two rooms where the three colors are presented in different ways: through video, from recipes to create the colors, and through rather unusual embroidered sentences such as: ‘octopuses get red when they are angry’, ‘we see green frogs but they are yellow’ or ‘white cats with blue eyes are deaf’ – and in the company of the embroiderer. In a way we realise this could be the start of the exhibition,  as the tour works in a two-directional manner.

The techniques and tools are present at all times:  from the installation of  grinding stones where the cochineal is crushed to produce red, to the piles of yarn for  the indigo plant, the pots of the dyers or the jicara shells for the yellow pigments. The hand of the master of the tradition is, thus, doubly present.

One of the key points of the exhibition, is the appropriation and recognition of the crafting process to bring it into the context of the contemporary. This idea is externalised not only through the work but also through the performative component which is key to the project: some of the master craftsmen will do their work within the exhibition space thus triggering various actions from activation.

The general objective is, above all, to create a kind of system of systems that introduces the spectator to a sensory atmosphere of transmission of knowledge and subjectivity that arises simultaneously, like a map open to a personal interpretation and of multiple channels of re-reading and openings for new possibilities.