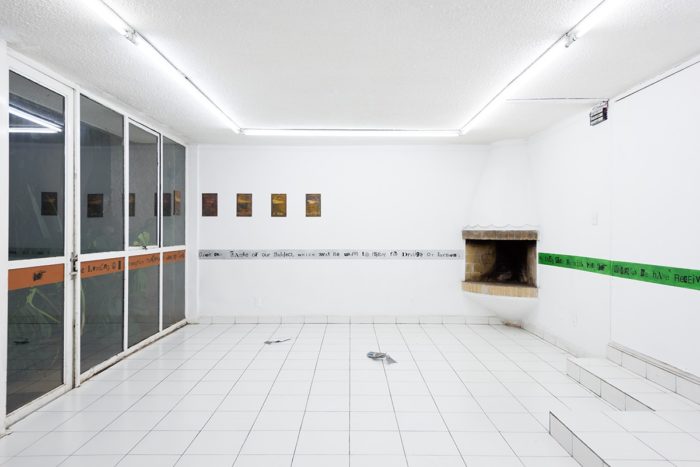 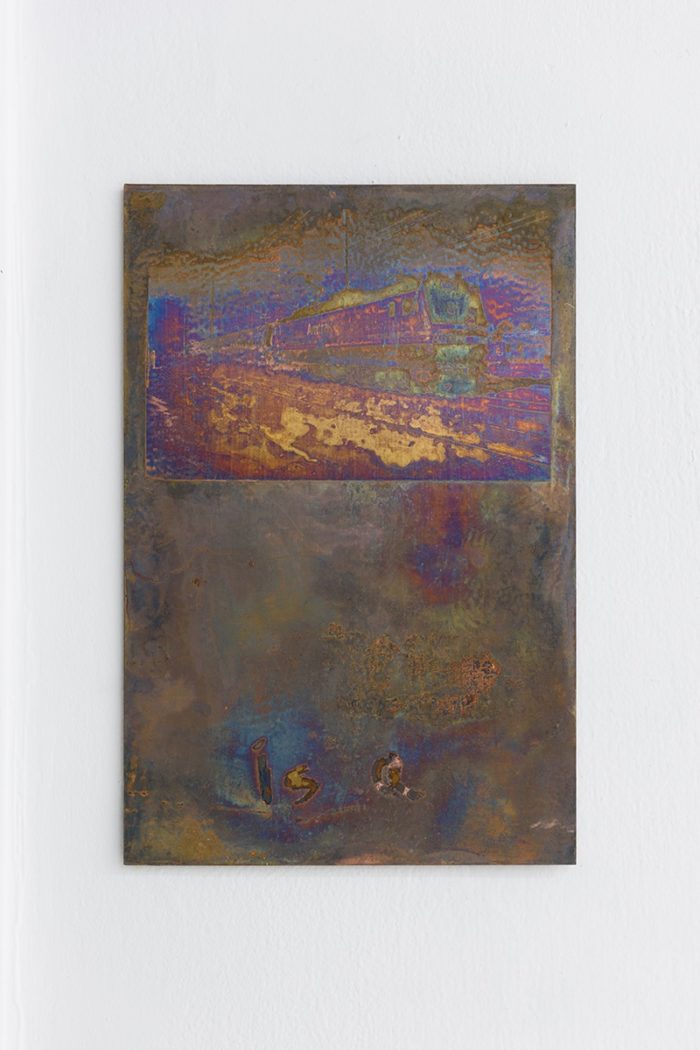 Concentric circles intersect and avoid each other altogether.

The room is wrapped by 4 thin, painted stripes. They are silver, brown, red, and green, in turns. A vinyl text in ransom note font is affixed along them reading something with a feudal timbre. The text itself, in addressing some external unknown party, releases the reader of responsibility to its content, but then immediately re-burdens them with its atmosphere of historicity as each of us are some descendant of every preceding event. Then in reverse duplication, the ransom note font assigns the reader’s responsibility through its form, then relieves them by its theatrical role in pop culture; the text and its form in mutual yet opposite conflicts over the reader’s role. Just then their in a tailspin; a vortex of duty to the message encircling the room…

On the floor are fish. In 1964 a treaty was signed to erect 5 dams along the Columbia River to provide hydropower to American cities of the Pacific Northwest, and protect them from flooding. Needless to say, the native people of the northwestern tribes were not consulted, and as a result have been displaced and inhibited. The salmon which once ran home on that river in the summers, and which to these tribes are a sacrament and a staple, now run into the concrete walls of dams.

Running along the wall, and briefly around one corner, is a train of 5 small brass plates. Scrawled upon them are words forming a sentence: “A room is a portmanteau of things and other things”. The word portmanteau firstly refers to a style of large compartmental luggage, and later, following Lewis Carrol, “two meanings packed up into one word”. In addition, each plate bears a roughly identical photograph of an Amtrak train. The name “Amtrak”, by which the fleet of passenger trains that unites the continental United States is commonly called, is itself a portmanteau of “America” and “Track”.

Depicted in video, alongside frantic plays of electric light, transparent parasites (those that sometimes crawl across your visual field) consume a flood of headlights falling from the freeway at night. A soft voice details the inside-out mechanics of potential over the progressive decay of magnetic tape.

In March of this year, the formation of large, colorfully-tiled concrete domes which had populated the plaza above the Pino Suarez metro station were demolished. The domes had served to render the public plaza inoperable in two ways: (1) preventing easy human movement, and (2) starving the ancient and potent informal market that would have doubtless assembled there otherwise. A remnant of the domes is present.