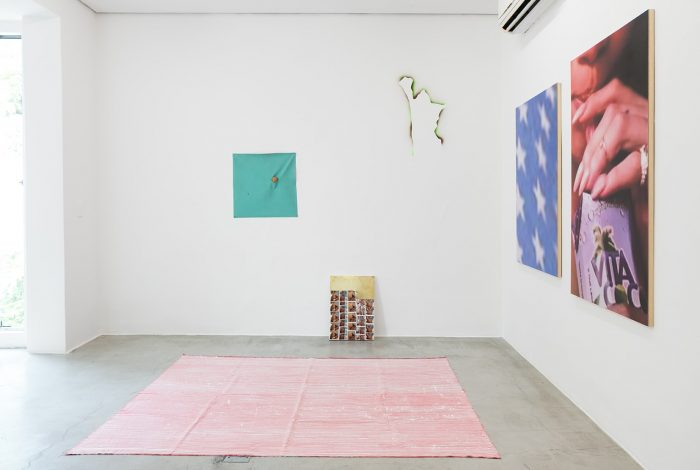 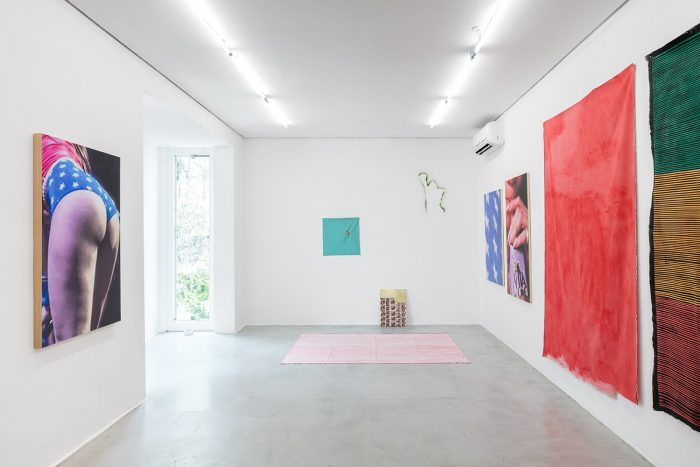 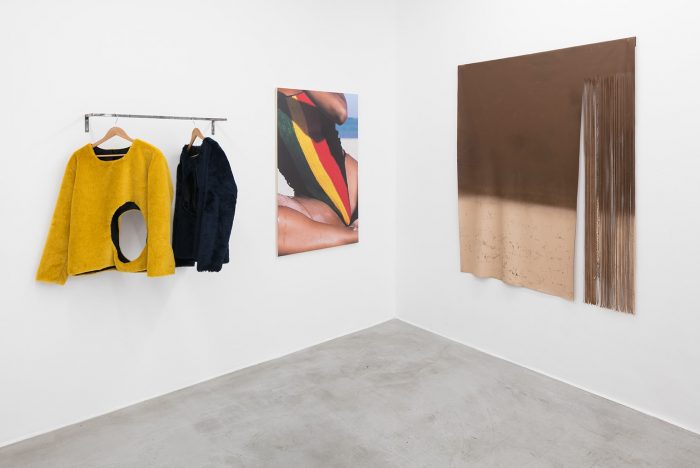 The sea is already closer to the beach­‐mat. Lala plays on the beach while the tide goes up. The day was already good and became lighter after her father understood that it was better to leave the bluetooth loudspeaker off. In the morning, the people under the parasol next to theirs scowled and said something that her mother couldn’t explain. What is a differentiated beach? For her all the beaches were different and the same, but the vibe was bad, and it improved after they turned off the funk and sertanejo beat from the playlist they made for the summer. Besides, she’d told her father that she thought that Jenifer’s song was kind of sexist and the conversation did not end too well.

So, no music for a while, not until they got back in the car. The noise of the waves was cool and matched the hot sun. She stopped fiddling with the sand and got up thinking it was time for a swim. She walked proud of the print she had done on her custom bikini, a piece of Tarsila’s mountains she’d seen in class. The mountains were from Minas Gerais, nothing to do with the beach, but the colors were so beautiful.

It was no big deal, but it was good to imagine that if someone looked at her, they would have something more to see than her own body, which fell short of what she considered ideal, even at her age. It was strange that she wanted to have more ass and more thigh when she saw herself in the mirror but also wanted to become invisible from time to time, when some guy stared at her as if she were a work of art or a piece of meat.

The waves helped to make it all disappear. The sea always helped. Her mother was so upset that her students at the school were stressed by the more aggressive conduct of the police in the neighborhood and had said earlier that the sea helped to dispel the sense of tension. Her mother was the best.

She returned to the beach‐mat very slowly. The waves had made beautiful designs in the sand. A dark diagonal matched a bit of seaweed and two ring­‐pulls from aluminum cans –one green and one gold. She loved these drawings that things made while distracted from themselves, almost like secret choreographies, made just for her.

“Lala, are you listening to me?” She heard her mother’s voice.

“Yes, mum, I’m just looking at the drawings the beach made for me.”

“Ok, look, I’m just going over there to the tent of the guy that does the hair braids, and see if he can do the one I sent you on Instagram. Don’t you want to do one as well? This raggedy hair­‐bun is a bit old, isn’t it?”

“It’ll look nice on you, mum, but we can’t be like a matching pair of vases.” She was already thinking of something else; of the girls’ bag in the tent next to them. She had seen one like that on the Instagram of her favorite youtuber and didn’t think that if someone had money to buy it, they would have the courage to bring it to the beach and put it on the sand. Without thinking any further, she scratched her nose and said, “Mum, when I get rich I’ll have one of those bags and give you one too.”

“Oh, honey, but didn’t we have to be different?”

Luisa Brandelli works as if asking: Is there a threshold between the repetition of a cliché and the reinvention of a sign? and between a stereotyped pose and a claim of identity? or, perhaps, between a remnant of obsolete images and a newly found composition?

Without definitive answers, she passes these questions on to those who encounter her works. The game continues as long as we know how to avoid definitions based on value judgments: good and bad, authentic and counterfeit, cultured and popular.

She decided that the thing now was to show her neck, which was where her pleasure began and ended. The rest could be discovered dancing.

The very idea of combining clichés from various cultural fields may sound like a cliché, but nonetheless remains an important linguistic platform in which social and poetic meanings and signifiers can take a vacation from their crystallized roles.

This can be done assertively, as in a sociological essay, or spontaneously, as in an assemblage, essay, or remix. Luisa Brandelli’s production starts from the latter alternative, not only in the way each image or object becomes delineated but also through the juxtaposition of her works in the exhibition space.

Her visual melody passes through funk, reggae, ocean waves, the sound of the click emulated by the cell phone’s camera, the distant Bossa nova music in the shopping malls, the noise of leaves fluttering in the wind, and the characteristic silence of museums.

When you think you have understood its rhythm and harmony, some elements appear to take you back to a field of inquiry. And when it looks like nothing really makes sense, the combination of two pieces causes some kind of short circuit that seems to have been carefully planned. In this movement, a butt can be more than a butt, but it can also be less. A painting may seem more impromptu than a cell phone screenshot, who knows, but it may also be the result of a long process of permutations and balances. The most important thing is to maintain the cadence and avoid sudden stops.

What can be seen, in fact, is the result of the artist’s body-on‐body action with the images that constitute her, with icons that don’t belong to her, and with herself, captured by the eyes of others as yet another image. Body-on-­body, frottage, body grinding, heavy petting –skin work that desires and wants to desire.

It is impossible to say now whether this is preparation for other practices or if it’s a practice that defined its own terms… but this is part of the rules of a game without pre-­set rules. At each stage of preparation of this exhibition, Luisa Brandelli brought works quite contrasting with the ones she had done so far.

This repelled attempts to define her work as a single set, while at the same time multiplying the complexity of the arrangements and montages of the show.

The “thing,” as Lala would say –an adolescent allegory invented to play with Luisa– is to go through these arrangements with maximum body-­on-­body action, tracking our own projections and inflections of desire.

—Text and curatorship by Paulo Miyada