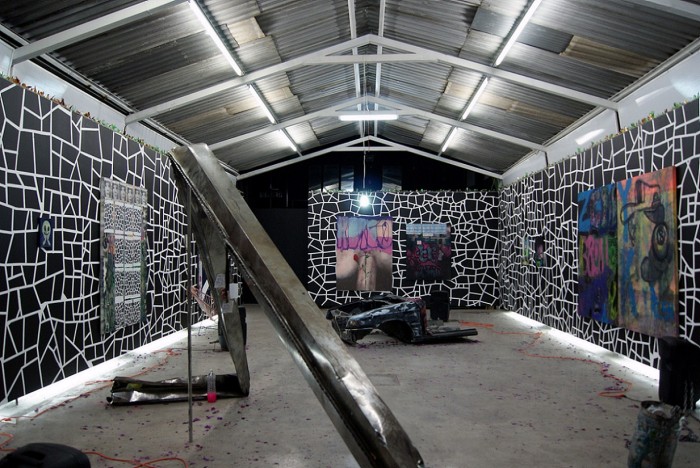 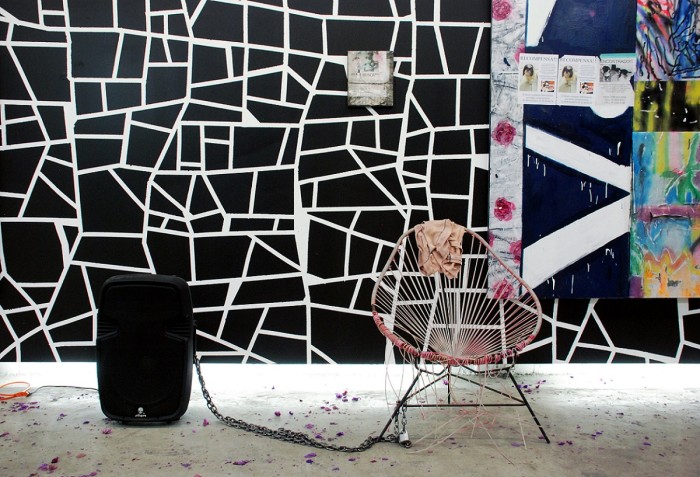 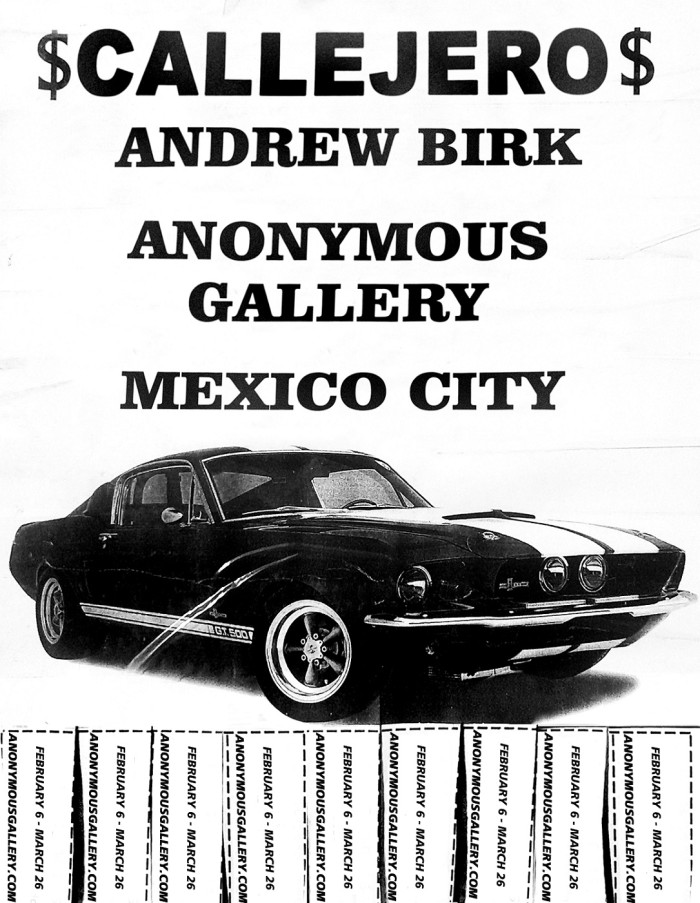 Andrew Birk is a fan of Mexico City. He’s been obsessively recording images with his phone for years. The pictures from his Instagram account (@andrewbirk) offer particular views and fragments of the city which seek to emphasize solutions of contemporary art and stand out as a persistence of painting. The latter is logical when you consider that this is the central practice of his production. Callejero is a large scale project that seeks, from a base of painting, to represent an image of the city consisting of different fragments, like those recorded in his photographs. However, Birk’s work transcends the simple domain of representation, the fragments amalgamated into a stage. While largely focused on research about this medium, Callejero goes beyond the two-dimensional and provides a wide sensory load. The paintings and other objects articulate a complex scenario, assisted by different stimuli (audio, lighting). Through the solution of his works and all other objects he’s able to include the dense, rough, polluted and even sometimes hostile materiality of the city in his scene.

Birk works this out with a number of materials and objects that have been found in the city or are easily available in the mercado (industrial products that can be found in any paint or hardware store and that are used practically all over the city). Proof of this are in the vinyl paint, aerosols and products like Bondo, a material generally used to restore and resurface car damage. Birk’s paintings are informed by the typical process by which this product is applied. After being polished, Bondo provides a finish that sometimes diffuses white color through different shades of automotive paint. This material, moreover, is used in some of Birk’s two-dimensional works; its application recalls the appearance of thousands of flattened concrete constructions from the city that, over the time, have been systematically covered by countless layers of paint (vinyl coated, graffiti, etc.). Some of the smaller pieces also contain this dense materiality. One of these, which has several photocopies, excerpts of tape and a cord wrapped around it, is semblant of an image that could easily be found on a utility pole.

This image of the city is framed by the walls of the gallery that have been painted black and white in a site specific grid, without advance planning. This design recalls the many walls in Mexico City made of volcanic stone and, over the years, have been painted in black, using the white on the concrete to clearly demarcate the boundaries between rock and rock. In this mural/sized painting Birk tries not to accurately represent these walls. In this sense, Callejero does not aspire to realism. In another small format painting, the artist appropriates an animated character from popular culture to transform it into a strange creature that seems to be upset, witnessing a deranged, exalted passion about the city. If the presence of stimuli, extreme materiality, glass shards, broken and fucked objects may denote and cause hostility; this finds its counterpart in the intrinsic degree of discomfort that characterizes daily life in the city.

Text by Daniel Garza Usabiaga
Courtesy of the artist