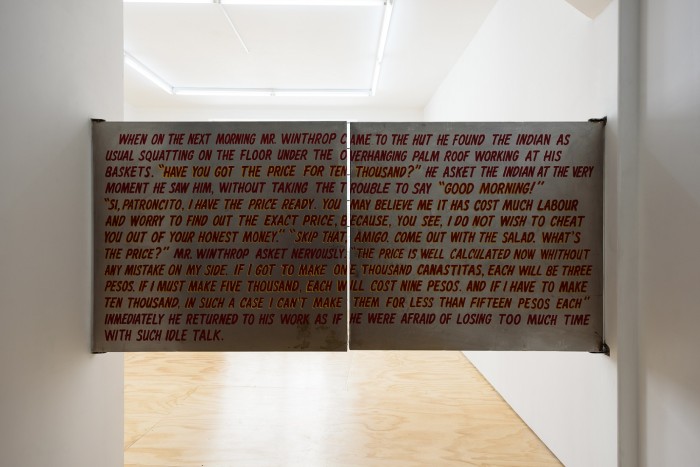 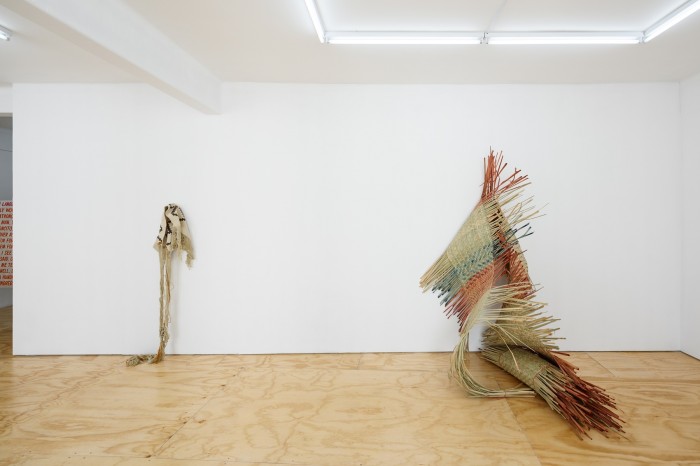 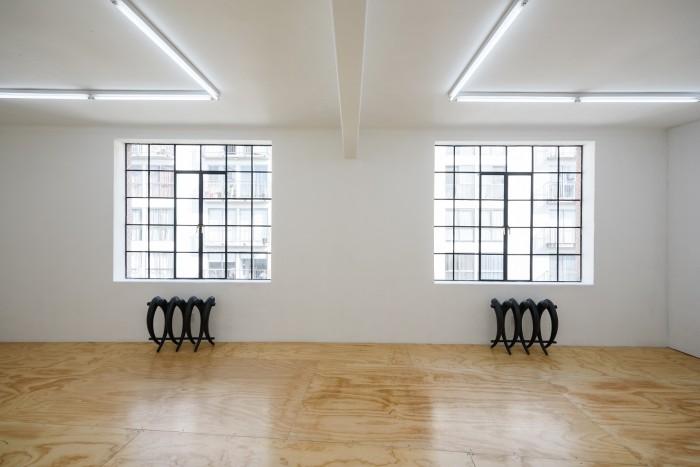 Everything that is not a basket, is a bad basket
Fudakowski, 2017

Bad Basket presents work created by Fudakowski during her two and a half month stay in Mexico. By acknowledging the sensitivity surrounding contemporary art’s appropriative tendencies against the back drop of Mexico’s history of colonialization and cultural appropriation, Fudakowski places herself in the middle of a very…err…ay yay yay…collar-pulling-um-awkward thingie.

Entering the exhibition necessitates a certain forcefulness from the visitor. The metal cantina doors which obscure  any initial view of the exhibition, carry an extract from B. Traven’s short story entitled Assembly Line, painted on their surface by Martín Hernández Robles, a rotulista (sign writer) from Mexico City. Traven is best known for his short stories first published in the 1920’s about the lives of ordinary Mexicans, which demonstrate a very accurate and insightful local knowledge, despite not being Mexican himself. B. Traven is the nom de plume of an author who’s biography is shrouded in mystery, made even more complex by the fact that his writings first published in German are full of Anglicisms, whereas  those published in English, are full of Germanisms. From the many theories surrounding Traven’s identity and the numerous explanations for his insight into Mexican life, one theory suggests that his stories were simply appropriated and translated into German. The extract focuses on a dialogue between a native New Yorker and an artisan from Oaxaca, setting up the compounding tensions of the exhibition’s context.

The three woven works displayed within the gallery demonstrate the result of three, three-day collaborations between the artist and an artisan; Fudakowski and Martina García García, Marivel Hernández Marcelino and Agustín Mendoza respectively. Each piece was created by the artisans and the artist weaving alternatively each hour. The natural coloured sections were created by the artisan, while the orange, reds and blue areas by the artist.

The installation of the two modular ceramic elements tucked against the wall, designed by the artist and produced by Abraham Yamil Sánchez Coverston, are reminiscent of radiators; an essential part of any Northern European home. The miss-match between the radiator’s ubiquity in Europe and it’s relative uselessness in Mexico makes it a vehicle for a well intentioned but misguided proposition. While their position in the gallery might still have a relationship with their use, both the aesthetic and production comes from a place where it does not. The titles point to the confusion experienced between two cultures and customs, as well as good-willed attempts at assimilation.