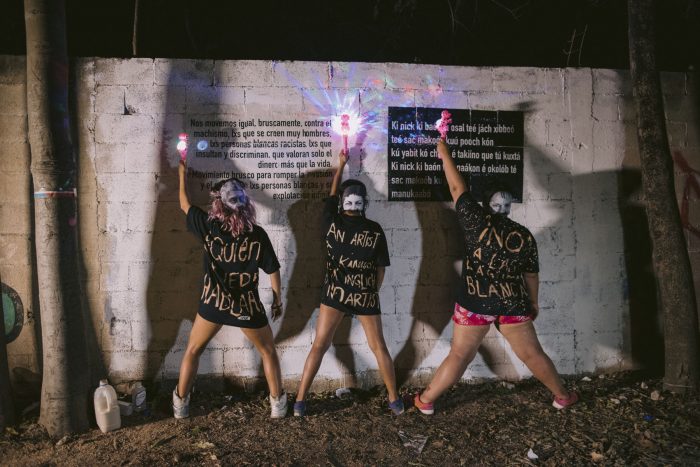 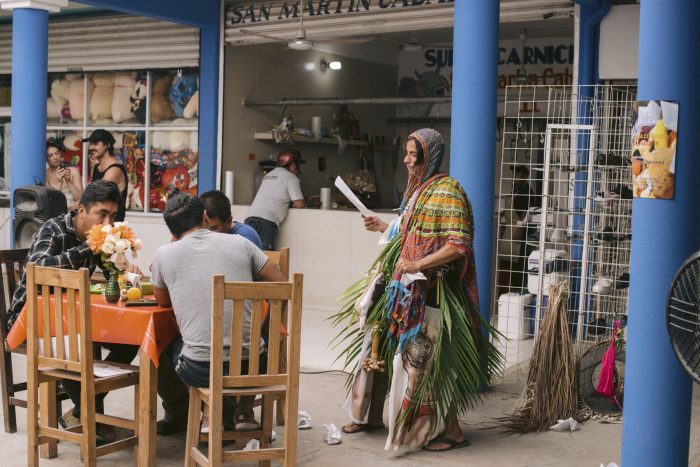 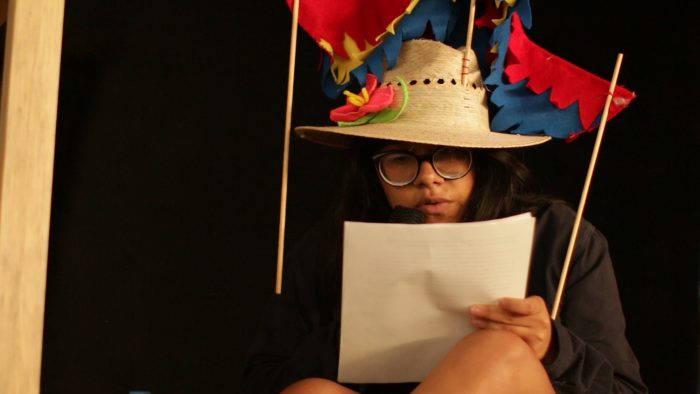 Stay present is the phrase that reads on a sign posted just after the short stretch of public beach in Tulum. What follows is an extensive private beach area, run by several establishments called eco chic. Meanwhile, the other side of the sign reads Embrace the mystery, that seductive invitation hides a kind of warning, which has to do with the tensions and violence that are exerted in that heavenly space. What kind of presence(s) do these statements encourage?

In that same place, last February, the third edition of the artistic residence AKI AORA took place. In charge of its founder Sally Montes and guest curator Sasha Galitzine, the residence took the streets to show the resulting processes through a public program that took place from March 1 to 9, 2019. Under the title AKA YA, this issue had a couple of particularities that I want to underline: one that has to do with the need to bring the results to the public space, as well as the selection criteria of its participants. Although the invited artists parted from different interests to activate their practices, the axes that summoned them appealed to the disruptive poetics of both the landscape and the multiple violences that are exerted on the bodies. All with the purpose of making these experiences manifest in common places of Tulum.

In the first instance, suspicion arises. In this space where the continuous integration of external capital and corruption for tourism purposes predominates, there is also an expropriation not only of the natural resources of the region, but of a very specific idea of the Mexican Caribbean. It is not news that the mediation of Tulum through communication platforms has been an important factor for the mutation of the reality of this so-called paradise through an imagery that for years has appealed to its projection as the ideal space for nighttime recreation and the indiscriminate circulation of drugs, staged with blue neon horizons. A perfect formula that for Tulum is already unsustainable. As a result of extensive research on the Anthropocene and aesthetics as a colonial strategy, the artist Sebastián Terrones participated in the program through the preparation of a menu that took the title Del paraíso terrenal al #paradise. Taking as its headquarters the Tulum Market, the lunch menu that the locals shared was composed of dishes that ironize different colonial dynamics that have been practiced in the Caribbean. While Sebastián activated some verses about the coloniality under which contemporary tourism is founded, the question of the repercussions of Tulum’s media ecotourism was eventually put on the table, literally.

How can one deal with the situations that have been brewing in these disputed lands? What are the powers of the artistic practices that respond to these games of power? How can a link be generated between those who detonate these practices and the different subjectivities that inhabit the space? Undoubtedly, I think of the members of Invasorix perreando in the middle of the street, in front of that same patrol that gave its second round to find out what was happening. In the middle of this dizzying context, they remembered the other violences, those that reside in the feminized, racialized and marginalized bodies, as they intervene a wall to say enough is enough.

On the other hand, it is also important to think not only of how research can be shredded in space, but on how space itself detonates another type of knowledge. In this sense, the work of Wendy Cabrera and Josué Mejía draws a historical outline on the shrinking exercises of Mexico. Exercises that, in addition to seeking to compress the diversity of a country for tourism purposes, are based on the projects of the architect Ramírez Vázquez, to culminate in the projects of the Xcaret eco-park—and which also ends up capitalizing, as only neoliberalism knows, all that nationalist imagery projected since the sixties. The artists generated a specific staging that ironizes the devices that have exotized the other, to turn into fiction the implications that this has in the policies of representation and self-representation of those who have been displaced to the margins.

It seems that, as a cry, AKA YA responds to this sign in the middle of the beach in two parts: a jaded scream that has in mind that, before these resistance exercises, other resistances have taken place; but also as a cry that remembers being present, where the artists use the body to respond to the context. Perhaps if something remains, it will be to insist that these exercises embrace the environment in more communal ways and examine what critical interventions can be done from these platforms.

AKI AORA is an annual artist residency in Tulum, Mexico founded by artist Sally Montes who grew up in the area. Over several weeks each resident artist is invited to select and explore areas of the local community or history and generate projects that include some form of collaboration between Quintana Roo’s local industries, communities, and workers in the creation of their work. This engagement with the local community is vital to the residency.