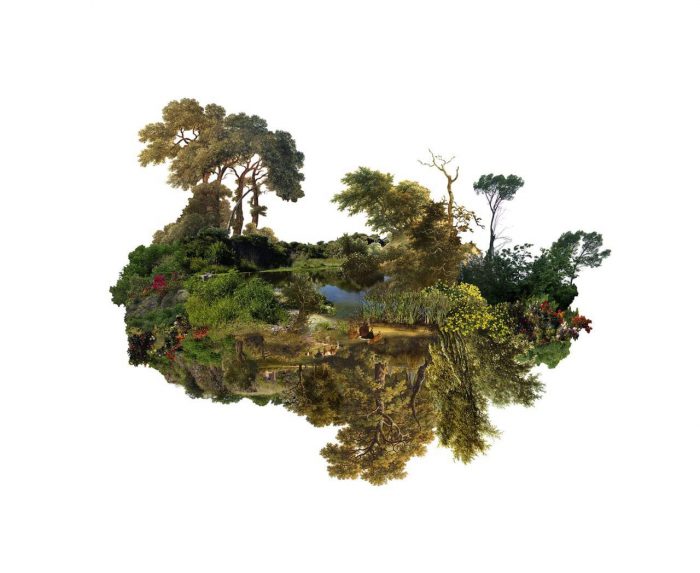 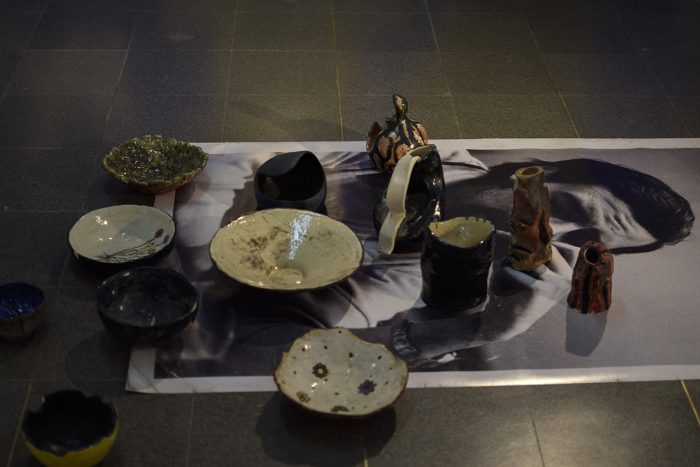 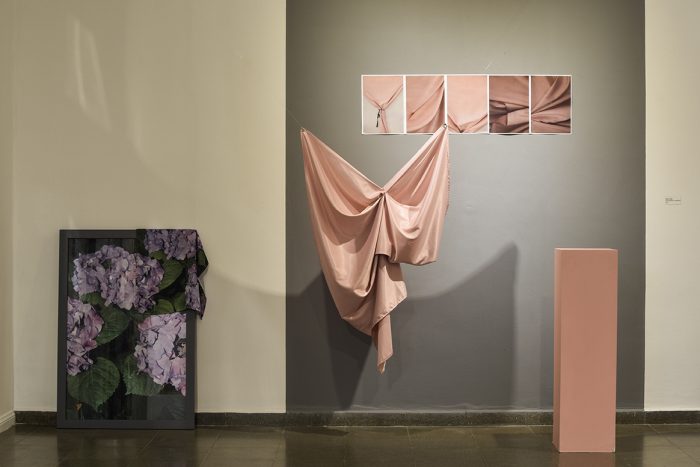 A polyphonic modernity, works of contemporary art burst into the first collection of the Museum, is a proposal presented in the context of the MAC Contemporary Art Market 2019 call. In this exhibition, the irruption of contemporary art is presented preserving the thematic axes of the permanent exhibition: The city and its surroundings, Nature as landscape, The artist and his models, Gaze on the everyday life and; Modern/Contemporary visual languages. Axes that were built to name, read and question artworks from the forties, fifties, and sixties; seem to be valid and current to show ruptures/continuation of the world of modern/contemporary art.

This exhibition includes a group of invited contemporary artists and artists whose works entered the collection through acquisitions awards in the aforementioned period.

This axis brings together artists whose productions are pierced by nature as a theme, concept, and matter. Nature appears as a cut-off, as a portion of reality, local/regional/provincial geography, as a reflexive gesture, construction, identity, creative essence, game, chaos, habitat.

In the Museum and the exhibition, nature is a diverse landscape, united by the look into a past and a present, on the same subject.

Juan Pablo Rizzo experiences a connection with a creative essence of the world and art, in collaborative construction with adobe, presenting artwork in situ.

Cecilia Orso grows in vegetal ways, which are imposed in her work taking different materialities; she presents an installation, Comunidad (Community), an organic, sensitive and rhythmic community, “a habitat in incessant transformation”.

Manuel Coll presents Atentado por Elian Chali (Attack by Elian Chali). The artist invites, integrates, unites and opposes forms, ways of being, that generate coexistence and attack. Altered artwork, ways of “affecting” nature, the landscape, the painting, and the artist. A regulated and agreed attack.

Julia Romano presents Paisajes culturales IX-retama (Cultural landscapes IX-broom), a built image, an idea of ​​subjective landscape, with identity personal and cultural elements. A personal “version” of the world, that reflects on the construction of the image, the way we see, and we relate to the world, the territory, and the contexts.

Gaze on the everyday life

This axis brings together artists who develope the “implementation of a look that is amazed by the syntax of small details and that rediscovers a space for reflection in the finite and fugitive world of everyday life” (Romano, 2017).

Lucas Di Pascuale presents Ileana y Jorge (Ileana and Jorge) from the Yerba mala (Weeds) series (2013), reflecting from ceramic pieces and photographs of his intimacy, about the fact of making art, taking the risk and saving himself in the same act. “An argument in appearance very simple: a portrait of the artist’s father under ceramics made by the artist’s mother, all put together, in a corner, as if it was in time out” (Fabhio di Camozzi, 2013).

Esteban Martínez presents his work Sin Título (No title), for which he resorts to everyday images of the media, which follow one after another tirelessly overlapping, showing and covering at the same time. They are isolated clippings, destined to be forgotten, that when translated into the painting, resist and resignify themselves by renewing in a new story, now recovered, now of his own.

This axis groups artists with the desire to break up, a will shared with others, which here diversifies into new materialities generating a more intense inflection.

Sofia Watson presents two works, Nuestra señora / superficie continua (Our Lady / Continuous Surface—acquisition of the Museum, second prize Domingo José Martínez Painting Competition 2017) and Estudio / superficie continua (Study / Continuous Surface). She researches, files, projects, paints, installs. Based on questions related to nude and feminine identity, there is a perception of Venus in connection with “its” story and “her” story that determines the skin as the protagonist. The skin from the skin.

Eugenia González Mussano with Aire Libre (Fresh Air), a usual sky from Córdoba installed in the museum. A mobile, versatile sky, an “action platform” that allows encounters. Activated, enabling artwork, a territory that folds, that is put away and extended again to be: a flag without a nation, a picnic tablecloth, a blanket on a beach, an artwork in a museum.

Melanie Dealbera presents Reacciones de un cuerpo quieto (Reactions of a still body). Melanie reflects on people and contexts, permeable, domesticated bodies, on a world “sometimes we are just a body, things happen to us, things that leave marks on us, modify us, transform us”. We are pierced and shaped bodies. The artist places this reflection on the materiality of objects, the surfaces, and the reactions.

Sofía Sartori presents the work Sobre pliegues y superficies (On folds and surfaces), an installation where she works the concept of the fold: “I’m interested in it as it refers to a wrap, that is, what is folded does not exist outside of what it includes. It implies it and thus it wraps it.” The surfaces of the bodies and materials, serve to tell about the world, the emotions, and the relationships.

The city and its surroundings

In A Polyphonic Modernity “the periphery is represented in different ways: surroundings, outskirts, edges, will be recurring topics in the visual arts” (Romano, 2017). Today, art penetrates spaces, objects, bodies, the city; it inhabits them and “creates space”.

In this light, Milton Fornés presents the first of four urban interventions of the installation: Andino Anónimo. Periferia urbana, borde de río (Anonymous Andino. Urban periphery, riverbank. A photographic record of a mounting on the banks of the Ctalamuchita river in Villa María, Córdoba; with remains and fragments of objects thrown in that area of ​​the city. Milton develops a series of artworks from a question: Is there a usual place for art or does art create space? There is a wall-less art that expands, that is object and experience. There is an art that creates a place, in and with the city.

Gabriela Manfredi presents Juego Que sí (I play yes), an impossible game, impracticable, a playful way of reflection and look. “A hopscotch that invites you to think, to observe, to remember, to touch, but functionally it can not be used.” This work refers to actions that were carried out in February-March 2015 in Villa María in the framework of activities for the National Day of Memory for Truth and Justice (to commemorate the victims of the last military dictatorship in Argentina, in 1976).

The Artist and his models

This axis brings together artists who represent the human figure. Whose figure is represented by the artist? We find everyday instants, solitary figures, dialogues. The work looks like the reflection in a glass, without glass, that shows something and reveals something, inviting us to see beyond the apparent. Who does the artist represent?

Marcos Goymil presents La métrica y la lágrima (The metric and the tear), a personal experience that broadens towards a view of the world. A body/bodies adapt to the measure of the social, they are operated, forcing them, marking them, demanding them. In The metric and the tear, “we discover facets of an experiment that was lived in his flesh: the experience of physical correction”.